Found: A Nazi 'Enigma' Machine at the Bottom of a Bay - Atlas Obscura
Want to see fewer ads? Become a Member. 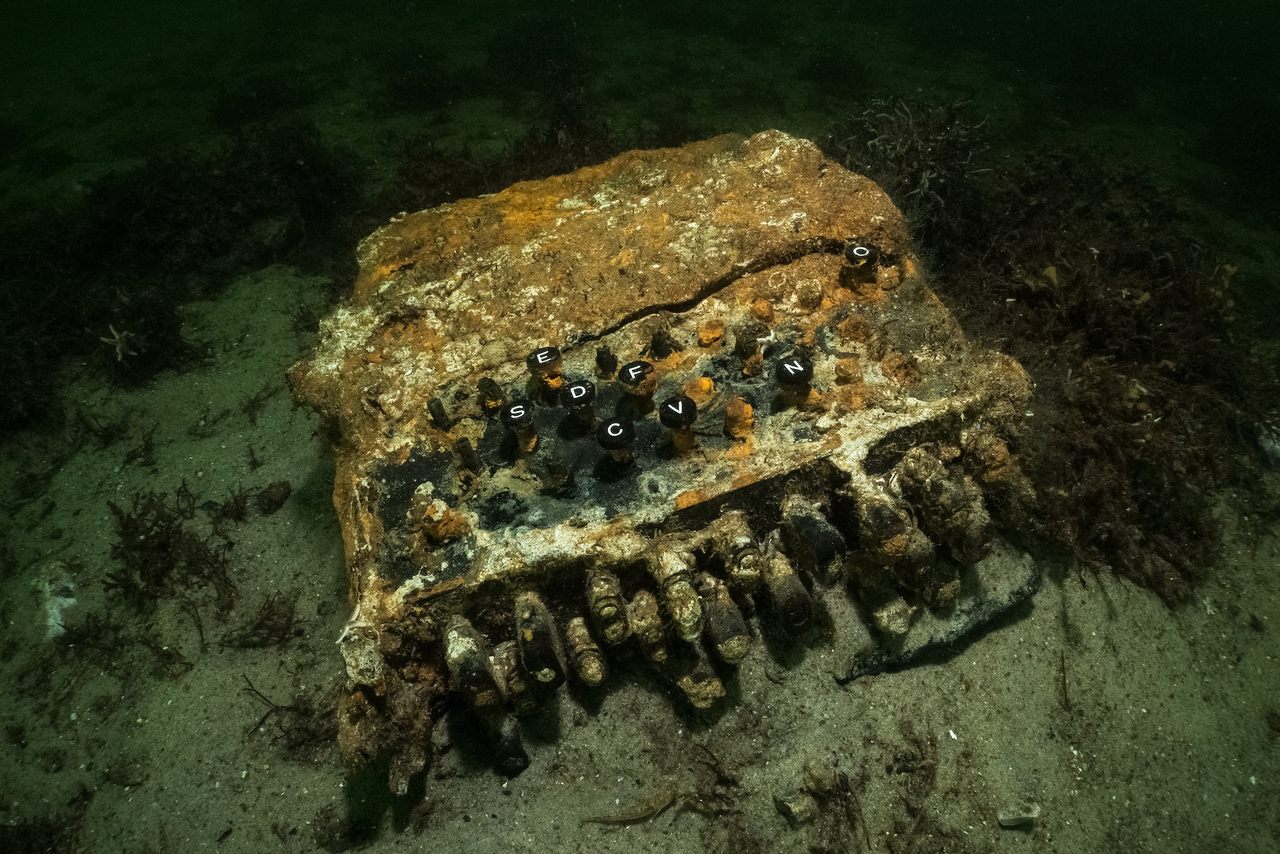 The machine, abandoned and claimed by nature at the bottom of the bay. © Florian Huber

When the marine biologist Michael ßwat descended to the seabed of the Bay of Gelting on the western edge of the Baltic Sea, he noticed a contraption tangled up in the fishing line the crew had headed down to collect. The device, which at first seemed like an old typewriter sitting under at least 30 feet of water, was a Nazi Enigma machine, likely one of hundreds abandoned and thrown overboard in the dying days of the German war effort.

The project that found ßwat at the bottom of the bay in November 2020 was a collaboration between the diving company Submaris and the World Wildlife Fund, mainly involving scanning the seabed for thin-filament sea nets. Also known as “ghost nets,” these have troubling short-term effects (ensnaring marine life) and long-term consequences (decomposing into buggersome microplastics, which pollute waterways the whole world ‘round). It was only after securing permissions from German authorities that Florian Huber, the team’s archaeologist, recovered the device.

The Enigma machine was a clever bit of engineering invented at the end of the First World War by Arthur Scherbius, among others, and repurposed by the Nazis for wartime use. When the Nazis needed to send confidential messages, they entered the dispatches into the machine, which substituted every letter using a system of three or four rotors and a reflector, encrypting the message for a recipient Enigma machine to decode. The Enigma vexed Allied forces until Alan Turing’s cryptanalyst team at Bletchley Park developed the Bombe codebreaking machine. Based on the previous work of Polish cryptographers, the Bombe greatly expedited the rate of Enigma decryptions, easing the war effort for the Allies.

When the Bay of Gelting Enigma machine was brought back above the surface, life had taken up residence on its shell. Mussels had secured positions on the machine’s flanks, and a small fish found refuge under the keyboard. (Huber tossed the fish back in the water.) This retrieved Enigma, which has not been above the ocean surface since it was in daily use, will be refurbished at the archaeological museum in Schleswig. It currently sits in a tank of demineralized water, where it will stay for nearly a year to flush out the salt that has corroded the machine.

A working group at the museum will be formed in early 2021 to assess how to proceed with the restoration, including deciding whether to disassemble the machine or keep it intact. Unlike many other archaeological finds, Enigma machines carry serial numbers. The restoration team hopes this one’s is still legible, because it may offer a lead about what ship or Nazi unit it came from. “This is certainly where most of the potential lies,” writes Ulf Ickerodt, head of the archaeology office in Schleswig-Holstein, in an email, “insofar as the device can be clearly identified through archival records that still exist today and its use/application can be traced.”

Now highly sought pieces of war memorabilia, three-rotor Enigmas sell for hundreds of thousands of dollars at auction. The later four-rotor model, more often used on German U-boats, sells for a bit more, maybe because fewer of the four-rotor Enigmas escaped watery tombs. Germany sunk its ships rather than letting them fall into enemy hands. One such mass sinking occurred in the Bay of Gelting, though Huber believes the device his team encountered was thrown from a ship other than a U-boat—it has three rotors.

Now that the device is retrieved, soon to be refurbished, Huber is relieved one of the complex contraptions of war will be preserved for the public, rather than in the hands of private collectors. “In a museum…this is where it belongs,” he says. “So everybody can get in touch with the history.”

It traveled three continents, survived desert warfare, and accidentally ended up with a man who'd been looking for it all along.
nazis

A hidden passage led investigators to a collection of 75 astonishing objects.
nazis

A museum volunteer saw it on eBay.
objects of intrigue

Dwight D. Eisenhower and Marlene Dietrich both belonged to this unusual club.
Video • Object of Intrigue