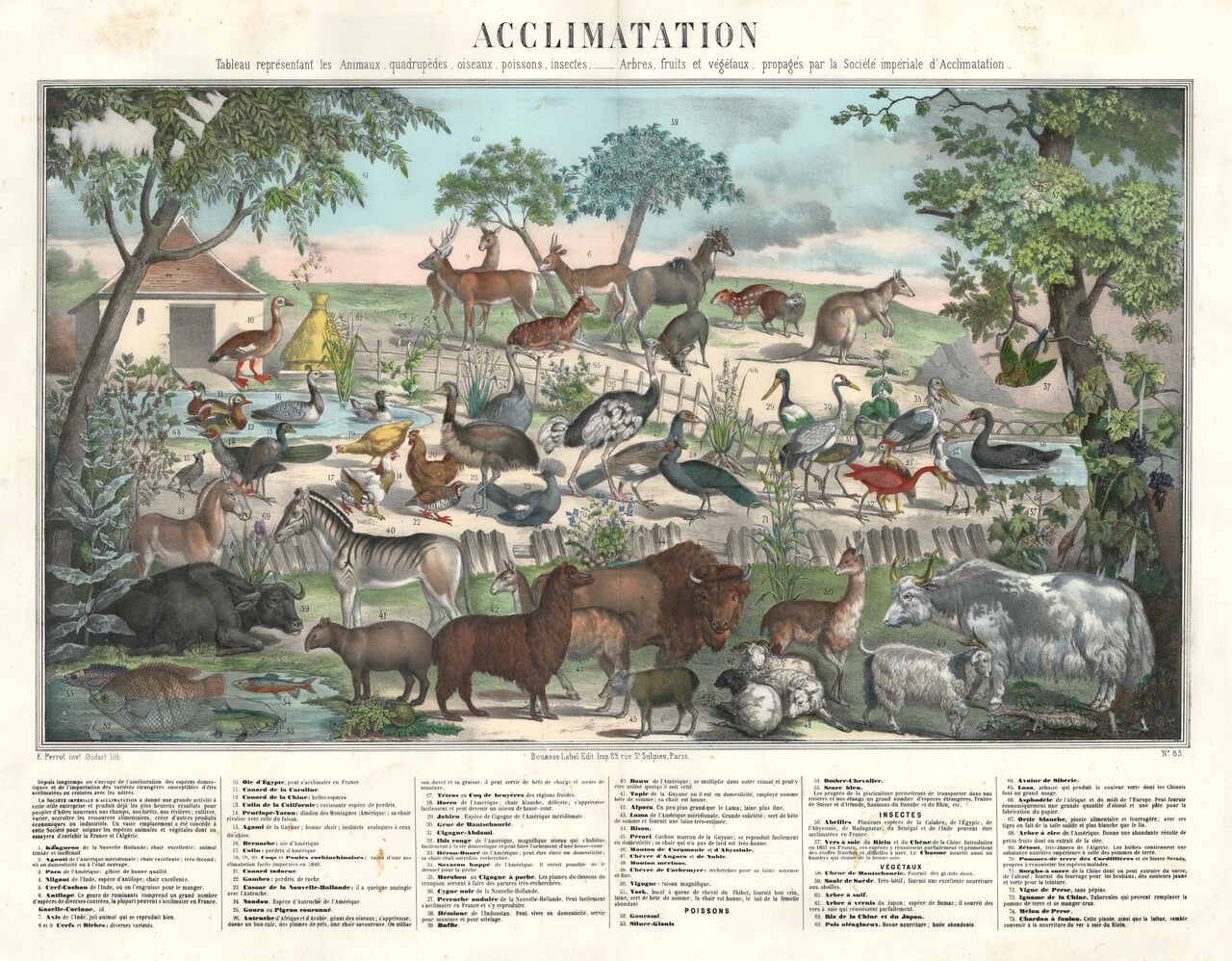 The map featured more than six dozen creatures and plants that the society hoped to settle in France. Courtesy Geographicus Rare Antique Maps
In This Story
Place

In this Parisian garden's grotesque former life as a zoo it fed exotic animals to the bourgeois and put humans on exhibit.
Destination Guide

If you lived in France in 1854, your neighbors probably did not include striped, round-snouted quaggas or strong-haunched kangaroos. Chances are also good you didn’t routinely encounter a scarlet ibis, a tapir, or a peccary. But at the time, a group of zoologists and anatomists, under the auspices of the Société Impériale d’Acclimatation, dreamed of a world where these creatures and many more could be imported to mingle happily on French soil. In a dreamy, single-page chart issued by the printers Bouasse-Lebel around 1854, 75 animals, insects, plants, and trees from around the world share a single pastoral scene, with a cottage in the background and a sunset melting across the sky. The idea wasn’t entirely fantasy, but rather a way to show the variety of species that the society hoped to bring to France.

Acclimatization was hot for part of the 19th century, when societies in France, Britain, and several European colonies dreamed of swapping species back and forth in service of expanding the options for flocks and herds of domesticated animals. (Societies in Australia and New Zealand, for instance, were keen on foreign fish—particularly salmon and trout from Europe and North America—and complained that there were few local animals worth hunting.) Michael Osborne, now an emeritus historian at Oregon State University, has described these efforts to resettle creatures from around the world as a key function of “Europe’s colonial enterprise.” As science writer Cara Giamo wrote in a previous Atlas Obscura article, the driving principle behind acclimatization squared perfectly with the colonial agenda: It was predicated on “the idea that European powers knew what was best for the entire world, and deserved both to spread their own way of life to all four corners of the globe, and to harvest all of the earth’s fruits.” Georges Buffon—an 18th-century naturalist who inspired acclimatization’s champion, Isidore Geoffroy Saint-Hilaire—could easily have been talking about the entire colonial enterprise when he said of animals, “It is for us to tame and render them subservient to our wants.”

The reasons for selecting a particular species for potential acclimatization ranged from fashion envy—a desire for, say, soft cashmere or Angora wool—to the desire to expand culinary ambitions, writes Harriet Ritvo, a historian at the Massachusetts Institute of Technology, in the anthology The Ark and Beyond: The Evolution of Aquarium and Zoo Conservation. In a caption on the chart, its authors claim that they’re out to vary and improve food reserves and economic resources. “There’s a mix of alleged motives” behind acclimatization movements, Ritvo says in an interview. Many of its wealthy, estate-owning enthusiasts “really were kind of romantics,” she adds. Some of them “just kind of liked the idea of jazzing up the local fauna.”

The idea of a national Noah’s ark sounded pretty good to many people, and by the 1860s, the French society boasted several thousand members and a sprawling home base, the Jardin D’Acclimatation in Paris’s Bois de Boulogne. The attraction was part zoo, part proof of concept. “It included the attractions that had become standard for a zoological garden and were consequently required by the general public—big cats, elephants, and other iconic animals,” Rivto writes in the anthology. “But these constituted only a part of its collection, and not the most important part, at least in theory or principle.” Instead, its custodians considered it “a laboratory for the study of acclimatization” of both plants and animals.

But the garden’s grand acclimatization experiment didn’t last long. Many of the animals were removed the following decade during the Siege of Paris during the Franco-Prussian War. Legend has it that as bellies grumbled across the city, some of the garden’s former tenants were butchered and served by renowned chef Alexandre Étienne Choron: some well-off human residents were reportedly fortified with kangaroo stew, roasted camel, and more. The garden eventually had a spell as a baldly racist “human zoo” that displayed people from all over the world as curiosities.

The trouble with the acclimatization agenda, Ritvo writes, was that many of the plans were too “ambitious and fanciful” to work. The society members often leapt to action with little regard for which how a species might fare—failing to dig into which plants love a drought, or prefer their roots to be waterlogged, or which animals were equipped to handle a French winter. In some cases, species that had been domesticated—anywhere—were thought to be reasonable candidates. “There are some things they couldn’t replicate,” Ritvo says. “If you get an animal that’s used to the savanna in Africa and you bring it to London, it’s probably going to expire.” According to one of the society’s reports, though, it ought to have been easy. The key to helping a species settle in was apparently just “time and patience.”

The plants, animals, and insects struggling to adapt to a changing climate all over the world are proof that it takes much more than that. Overall, “there wasn’t much uptake,” Ritvo says, though a few species did settle in, in various places. European starlings, released in (among other places) New York City’s Central Park, by a Shakespeare enthusiast who wanted to fill North American skies with the feathered characters from the Bard’s plays, now number more than 200 million between Alaska and Mexico, according to the Cornell Lab of Ornithology. More commonly, though, societies struggled, including in their quest to convince local agriculturalists that they needed new stock. “If you’re an ordinary farmer, you’re probably perfectly happy with the cows and sheep and pigs you have already, and you’re not feeling the need to introduce a llama or a bison or anything like that,” Ritvo says. The experiments were also “expensive and risky,” she adds, and many animals died in transit.

The acclimatization frenzy largely fizzled by the late 19th century. But the legacy lives on—some societies are still kicking, but have evolved into natural history organizations—and if you find yourself in Paris today, you can still visit the Jardin. The flower-studded grounds recently got a makeover, and the attractions now include amusement rides, wooden boats, as well as rabbits, guinea pigs, goats, and sheep roving around a charming, thatched-roof farm—named after Saint-Hilaire. Just don’t expect to see any quaggas—those South African zebras have vanished not just from Paris, but from the rest of the planet, too. Today, the chart and garden are pretty monuments to an experiment that could never have gone quite as planned.

Without jumping in the frigid North Atlantic.
zoosagriculturecolonialismmapsanimals

How to Stream the Animal Kingdom From Your Sofa

Your world might have shrunk—but you can still meet manatees, jellies, bears, and more.
science

Like humans, the notoriously nervous cats can use a surrogate best friend.
Video • Object of Intrigue

Before the birds moved in together, they had to learn to "howdy."
Read more
Thanks for sharing!