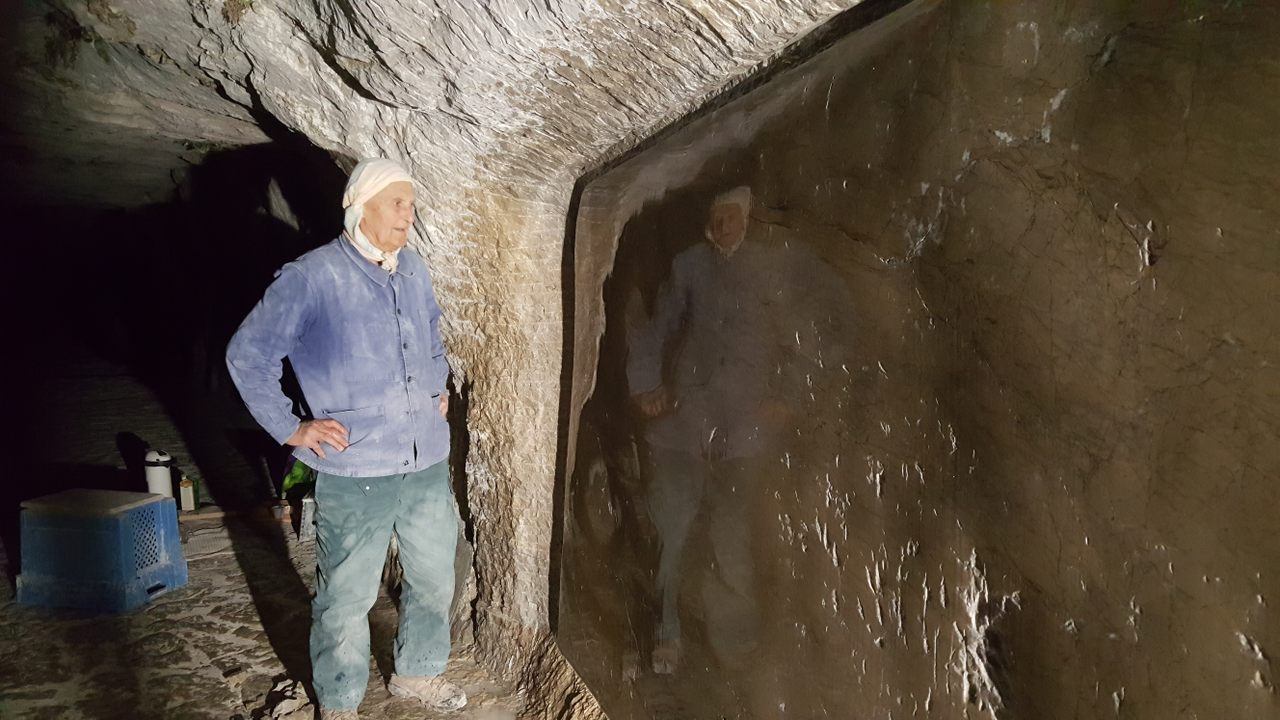 Daniel Monnier in 2019, reflected in his polished limestone mirror. Sam Harrison
In This Story
Destination Guide

Night is falling around Daniel Monnier. Sitting on a small plastic stool, the 78-year-old, all-but-retired sculptor is patiently chipping away at the limestone wall of a tunnel-like path that runs along the Lot River between Saint-Cirq-Lapopie and Bouziès, in southern France. He’s carving the edges of what will soon be a polished limestone “mirror,” reflecting the river and the sky—if he calculated the angles right and the calcite crystals in the rock cooperate. “In this type of work there’s always surprises you aren’t expecting,” he says. “It’s not a bathroom mirror.” A few feet away, the first half of his project, a bas-relief of carved waves, fish, and rippling stone circles that covers 60 feet of the rock face, shines in the lamplight. He never thought he’d get to finish this work; after all, it had been more than 30 years since he started it.

That Monnier has been able to return to the work at all was due mostly to chance. A year earlier, on June 25, 2018, he recalls, a young man who worked as a guide on the boats that tour the Lot River was riding his bike at dawn when he ran into Monnier taking pictures of the original bas-relief. “We’ve completely lost track” of the artist, the man told Monnier, who hadn’t been back to see the work in 25 years. When the young man—Monnier does not recall his name—learned who he was speaking to, he was shocked. “He would have fallen in the river,” the sculptor laughs.

Monnier didn’t realize how popular his bas-relief had become in his absence. What had been a deserted path when he began and ceased working on the sculpture had become a popular tourist trail, and the story surrounding the unsigned work had grown to take on a life of its own.

A few days before Christmas 1984, Monnier was hiking from his home in Toulouse to visit family in Sainte-Foy-la-Grande, a village near Bordeaux—a trek of more than 120 miles. He wanted to avoid roads and decided to follow a small, intriguing dotted line on his topographical map. Along it, perhaps half-way to his destination, he discovered what felt like a secret tunnel. Along the Lot River, hidden at the base of the cliff, a path had been carved out of the rock to connect two small villages. The path was deserted and humid. Plants hung from the ceiling, water dripped along the walls. “It was wonderful,” says Monnier, who had been a sculptor for over 20 years at that point. He pulled out a pencil and drew, directly onto the wall, two lines, roughly 60 feet apart. The stone was “like an elephant’s stomach,” he says, smooth enough to draw on.

Monnier’s sculpture work is semi-abstract, and inspired by nature, he says. He’s made more than 100 pieces over the course of his career, some of which are on display in public buildings in France, as well as private homes around France, Switzerland, Spain, Austria, and England. After a career spent finding and transporting tons of rock from quarries all over France, he’d always wanted to work on a bas-relief, something that would be part of the natural scenery around it. He’d found the perfect spot.

The path Monnier encountered had been dug out of the cliff between 1843 and 1847, and is the only known river towpath in France to have been built this way. The workers hammered bars into the rock and then stuffed the holes with explosives—the grooves from this process are still visible on the rock face. When they were done, there was almost 1,000 feet of new, flat path, covered by the overhanging rock face and running just along the river. Horses and people used it to tow flat-bottomed barges called gabarres, laden with wine and other goods, up the river in the direction of Bordeaux. But only a few decades after it was finished, train service arrived in Bouzies, and in 1926 commercial shipping on the Lot River was stopped, so the path fell into disuse. The tow path was overgrown and basically ignored until Monnier stumbled upon it 60 years later.

It took him two years to get permits from four different local authorities to begin his self-funded work on a small, 43-square-foot section, with the condition that it be out of the public eye and didn’t ruin the natural scenery. Finally, in 1987, Monnier set up camp right on the towpath with little more than a sleeping bag, a mosquito net, and his tools. The people of Bouziès were understandably suspicious. “Seriously, they would have thrown me in the Lot,” he says. One woman came to yell at him about disfiguring the cliff face, and the police paid him a visit. “They used to come in civilian clothes and pretend to be fishing,” he says. But mostly they left him alone as he worked through the summers of 1987 and 1988.

At the end of his 1988 season, a surprise visit from M. Leblond, the local prefect and an art aficionado, gave him funding and allowed him to expand the project to cover the wall along 60 feet of the path. Leblond even arranged for a house in Bouziès where he could stay for the six months he worked in 1989.

Monnier was carving one of the final pieces into the bas-relief when he looked over and noticed movement in a polished swirl he’d carved. “It was the clouds drifting by in the Lot. Like a mirror,” he says. Calcite crystals in the rock made the compact stone reflective, he realized. He wanted to add a final piece, a polished limestone surface that would reflect the scenery.

But local authorities decided that he had done enough and ended the project there. Monnier was disappointed but resigned. “I packed everything up, took my tools and I left,” he says, promising himself he would come back one day.

While Monnier was gone, the area experienced a tourism boom. In 1990 the river was reopened for recreational boat traffic and in 2012, the picturesque village of Saint-Cirq-Lapopie was voted “Favorite Village of the French,” on a national television show. Hundreds of thousands each year came to visit, in a town with just 204 permanent residents. Bouziès, population 80, now averages 80,000 to 100,000 visitors.

According to a footstep counter on the path, 43,000 of these visitors walked along the towpath (it takes about an hour to go from one town to the next on foot) and passed Monnier’s bas-relief between June and November 2018. Many more rode by it on tour boats. “People were completely thrown by this thing,” Monnier says. “For them, when they walk here from Bouziès or Saint-Cirq, it’s the end of the Earth. And all of a sudden they come upon this.”

Monnier’s name always appeared in “official” stories of the bas-relief and on the town’s website, even though it’s not on the work. Monnier has been told, however, by hikers and tourists, that it was actually made by André Breton, the cofounder of Surrealism, who had owned a house nearby and sculpted the work on his daily walks. Others were sure that the mystery artist had died, or even that it was somehow related to the prehistoric paintings in nearby Pech Merle Cave. “Anonymity has always been my thing,” Monnier, who prefers to sign his work with a symbol, explains. “I never wanted to put my name in front of my sculptures.”

Three days after Monnier met the young man on the towpath in 2018, the town of Bouziès invited him back to finish the mirror. “They’re lucky I’m still here,” the 78-year-old jokes. No one wants to throw him in the river anymore. “Now, they roll out the red carpet,” he says. With thousands of visitors, the narrow path no longer allows him the luxury of camping on site, and it is now too crowded for him to work during the daytime. So he works at night, with the help of a spotlight and a generator. “The night goes by quietly, there’s no pressure,” he says. “I look up all of a sudden and it’s 4 a.m., and I didn’t see the time pass.” The project has had its challenges: A corner of the limestone mirror nearly fell on Monnier while he was working. The explosives used to clear the towpath had weakened the stone. He’s decided to leave that ruined corner as it is, as an artifact of the path’s creation. The long, thin grooves from the explosive excavation are also incorporated into the bas-relief.

Over the summer, the town of Bouziès organized dance performances on the towpath, with his bas-relief as a backdrop, and it has added two more Monnier originals to the town’s collection. The mirror, titled Incidence—and, in turn, the entire work itself, Le Lot—will be done by the end of September 2019. According to Gilles Raffy, the mayor of Bouziès, Monnier’s bas-relief “greatly contributed” to developing tourism. It’s not a bad story for an unsigned artwork on a deserted path. Even Monnier seemed surprised. “I hadn’t realized the impact this thing had,” he smiles. “I was gone for 30 years.”

What’s the most beautiful tunnel you’ve ever visited? Share your comments and thoughts about the story in the Atlas Obscura Community Forum!