From Bordeaux to Brie, This Map Plots the Origin of Your Favorite French Food - Gastro Obscura 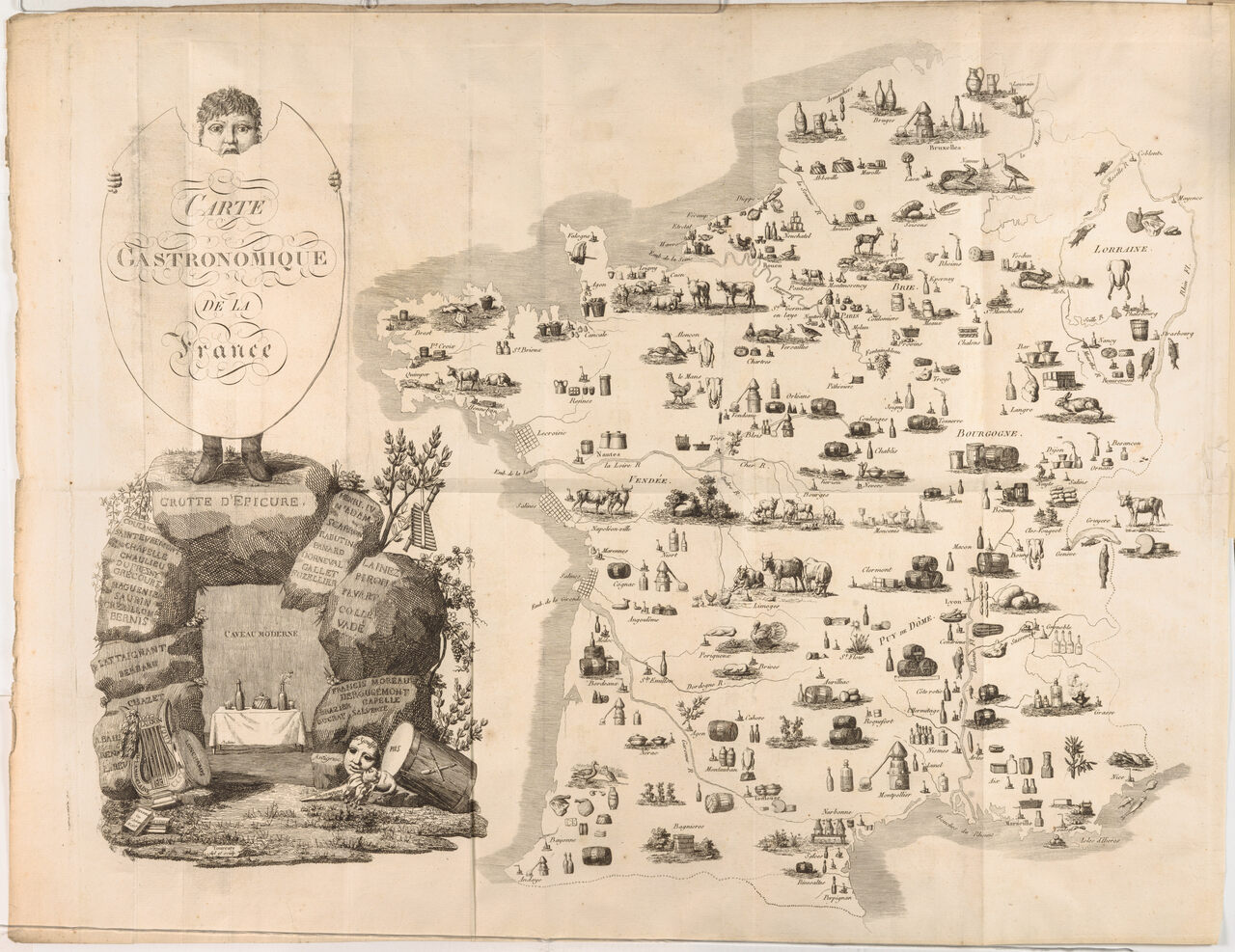 Gastronomical Map of France by Jean François Tourcaty. ALL IMAGES: COURTESY OF CORNELL UNIVERSITY - PJ MODE COLLECTION OF PERSUASIVE CARTOGRAPHY/CC BY 3.0
In This Story
Destination Guide

So you’ve given into the foodie inside and are planning a culinary trip to the land of gastronomical heaven: France. But besides enjoying galettes in Brittany and sipping champagne in Champagne, how can you know where to best enjoy the wonders of French cuisine?

For starters, you could use this Gastronomical Map of France. With wonderful illustrations, the map details the major products of the country in the regions that they are produced.

Though the map was made by Jean François Tourcaty in 1809, it is surprisingly relevant in the 21st century. Of course, there are some discrepancies between the map and today’s France that reflect the course of history.

For example, Brussels and Geneva are included within the boundaries of the country, and modernity has made certain places unfit to continue providing some of these gastronomic products. No one wants Parisian fish taken from the polluted waters of the Seine, and hunting at Versailles has not been a pastime for many years.

For the most part, however, the change has not been drastic. You can still find expansive vineyards in the Bordeaux region, herbs in the southeast, and beer in the north. The map also gives geographical references to products that we all know and love, such as cognac, brie, and roquefort, which originate from cities that bear their names.

The map was made for and included in a philosophical and literary book on food, Cours Gastronomique. The tome was written by Charles Louis Cadet de Gassicourt, who is believed to have been the illegitimate son of Louis XV.

The Cours Gastronomique is dedicated to the Caveau Moderne Society, which saw a group of men get together once a month to enjoy a sumptuous meal, as well as song and wine. This society disappeared and was revived numerous times between 1729 and 1939, and was widely recognized in France and abroad. Women were not allowed to partake in the festivities, despite the important role they held in the production, distribution, and preparation of French cuisine.

The cartouche on the left side of the map includes a cave in which a table with wine and food are served under the name Caveau Moderne, and rocks in which the names of some of the members of the society are engraved.

Food was the central part of the events of the society, which was epicurean by nature. Gastronomical topics would be discussed as part of larger philosophical and scientific debates. As a member of the society, Cadet de Gassicourt was a fervent believer that the study of food was invaluable to scientific progress. Food was not just a bodily need, but a source of great knowledge for the advancement of society.

The Gastronomical Map of France, which is part of the wonderful Cornell University PJ Mode Collection of Persuasive Cartography, is “less a geography lesson than a testament to the depth and variety of French food and wine,” according to the collector’s notes. Printed 10 years after the French Revolution, it shows a country unified by its culinary strengths.

If you ever want to know which French regions produce bovine products, which ones have wild boars and hares, and where to find varieties of wine and cheese, you need only look at this map. Not only is it beautifully detailed and historically interesting, it is also one of the most delicious maps you will encounter.

Found: A Photo That Might Prove This Famous Jewish Assassin Survived the Holocaust

"They’ll definitely be tasted, but we’re taking our time.”
food

It was seen as a threat to colonial rule.
restaurants

Who thinks it's a crispy crust?
Video • Wonder From Home

This Christmas bread is formed in the shape of the baby Jesus.
Gastro Obscura

This star-shaped fruit has been beloved for centuries.
Related

The French literary icon thought this 1,150-page compendium on cookery would be his masterpiece.
Read more