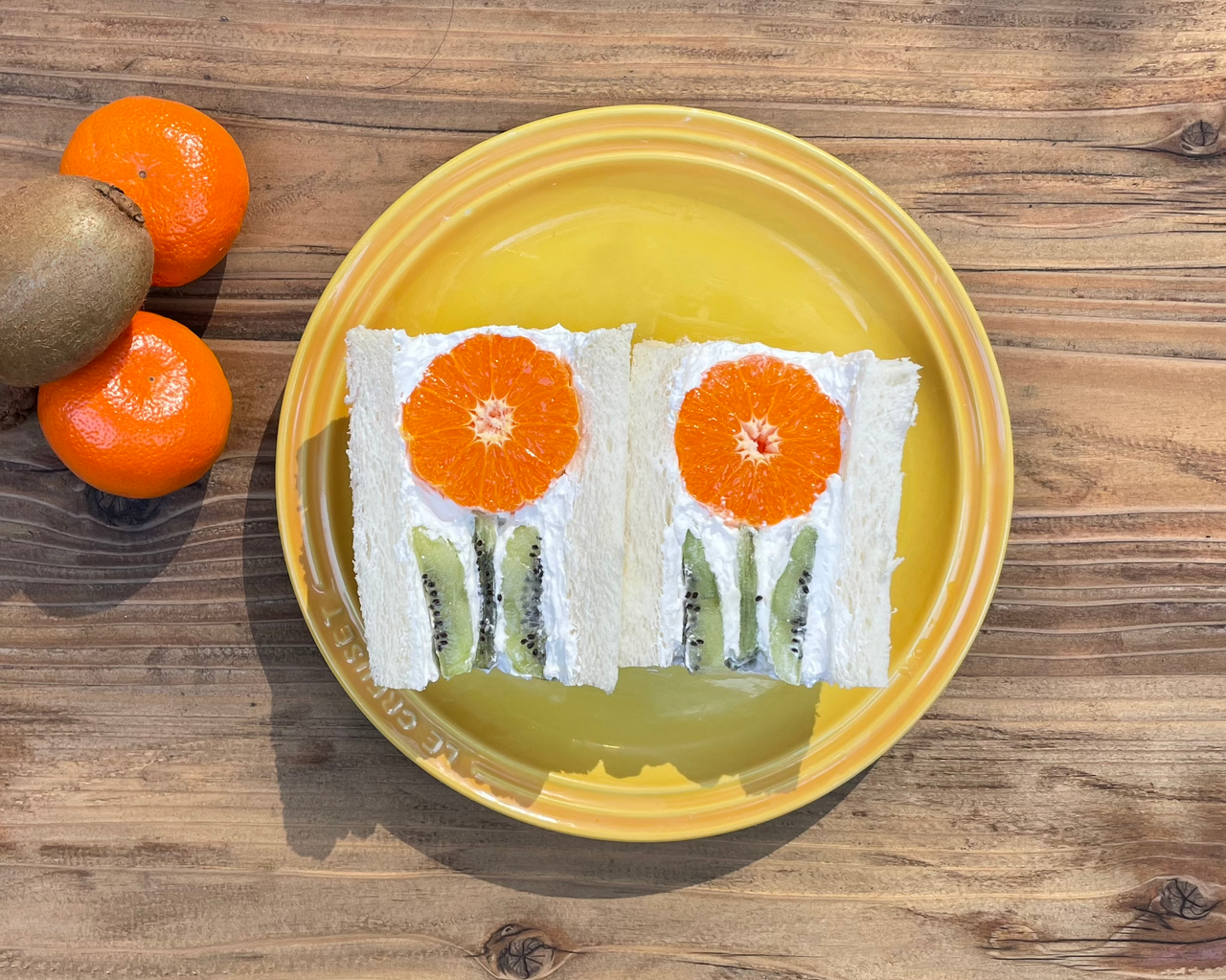 This fruit-filled sandwich hides a pretty flower inside. All photos by Grace Kwon
In This Story
Food

Fresh fruit is the main feature of this sweet sandwich.
Food

Which one of these sandwiches does not belong?

To the Western eye, the answer is obvious. And yet, if you stroll the aisles of any Japanese convenience store, furutsu sando, or fruit sandwiches, are a common sight.

Sweet sandwiches exist outside of Japan, of course—think peanut butter and jelly, or even the Fluffernutter. But it’s not only the filling that sets fruit sandwiches apart. Bakeries don’t use whole wheat or rye to make them. Instead, they use shokupan, the lightly sweet, fluffy milk bread adored by breakfasters across Japan. The result is remarkably similar to angel food cake, especially when surrounding a filling of strawberries, mandarin oranges, or any other fruit.

What really makes fruit sandwiches stand out, however, is the presentation. Cooks carefully arrange the fruit so that slicing the sandwich reveals geometric or even flowery patterns, suspended in the cream.

That said, fruit sandwiches are not an invention of the Instagram era. These sweet treats have roots dating back to the second half of the 19th century, when the Japanese government launched a campaign to modernize Japan through Westernization. During that time, Japanese society saw anything Western, from business suits to sandwiches, as aspirational. Meanwhile, fine fruit was—and still is—seen as a delicacy in Japan. Combine the two, and you get fruit parlors: stylish, vaguely European-style cafes featuring fruit-themed delights. But while parfaits and cakes were pricey, fruit sandwiches offered an inexpensive taste of luxury.

In Tokyo’s ritzy Ginza district, you can still stop by Sembikiya, the fruit parlor rumored to be the birthplace of the fruit sando. In the 1830s, farmer Ohshima Benzo set up a stall in the entertainment district of Edo (the previous name for Tokyo). Over time, his passion for growing and selling quality fruits paid off, and he developed a following among the upper classes, even securing a prized relationship with the Tokugawa shogunate. In 1868, Sembikiya opened the first fruit parlor, which became famous for “Western” foods such as mango-infused curry, strawberry milk, and, of course, fruit sandwiches.

Though fruit sandwiches are no longer seen as especially luxurious, they’re still a stylish everyday treat. They’re now widely available everywhere from bakeries to high-end department stores, with price tags ranging from as low as 270 yen (around $2.50) at 7-Eleven to a hefty 1,458 yen (about $13.50) at Sembikiya.

If a trip to Japan is impossible at the moment, never fear—you can still enjoy the magic of fruit sandwiches at home. This recipe produces a spring-worthy flower design using a mandarin orange and a kiwi, but feel free to swap in the seasonal fruits of your choice. Although the flower design requires more finesse than a PB&J, a little care results in a parlor-worthy fruit sandwich. Then, turn on your cherry blossom Zoom background, settle down on a picnic blanket, and imagine it’s spring in Ginza as you take a bite.

1. Peel the mandarin and kiwi. Stand the kiwi on one end and slice it through twice lengthwise, slightly to the left and right of the center. The result will be three kiwi slices: two elongated domes for the leaves, and the skinny, flat center piece, for the stem. Using a paper towel, pat the slices dry.

2. Make the whipped cream. In a chilled, dry bowl, add the heavy cream and whisk it with an electric mixer on medium-low. Once the cream starts to look frothy, add the sugar and flavoring, then whip on high until it forms medium-to-stiff peaks. It’s very important that the whipped cream is thick, or the sandwich will get soggy and lose its shape, so either refrigerate the cream or use it immediately.

3. Take a piece of plastic wrap large enough to wrap a tall sandwich. Lay one slice of shokupan in the center of the plastic wrap. (You’ll be slicing it straight down the middle into rectangles, not triangles.) Spread on a thick layer of whipped cream. Without placing it down, orient the mandarin above the upper half of the bread, upright like a miniature Ferris Wheel. (If the fruit were a tiny globe, the north and south poles would be facing left and right.) Then, gently place the mandarin into the whipped cream. The orientation is tricky, but correct placement will ensure that the cut sandwich reveals the flowery cross-section of the fruit.

4. Place one of the kiwi domes directly below the mandarin, with the cut side facing down. Cover the dome with another thick layer of whipped cream, then place the flat piece of kiwi on top. Cover with yet another layer of whipped cream and nestle on another kiwi dome, with the cut side facing up this time. (The final sandwich will be very, very tall.) Finally, cover everything—mandarin, kiwi, and bread—with a thick layer of whipped cream, so it’s a relatively even height, like a freshly-fallen snowbank. Try to keep the fruits neatly lined up through the middle of the sandwich for the prettiest result.

5. Lay the other piece of shokupan on top and gently compress the sandwich. Wrap tightly with the plastic wrap. Then, refrigerate the sandwich for several hours, so the fruit and cream has time to set.

How Can a Basilica Stay Dry Amid Venice's Rising Waters?

A Love Letter to Drinking Foods Around the World

Kannapuram locals are documenting and conserving the many kinds of their favorite fruit.
Video • Wonder From Home

This teahouse's specialty has been unchanged for over 400 years.
Want to see fewer ads? Become a Member.
From Around the Web
THE GASTRO OBSCURA BOOK
Taste the World!
An eye-opening journey through the history, culture, and places of the culinary world. Order Now