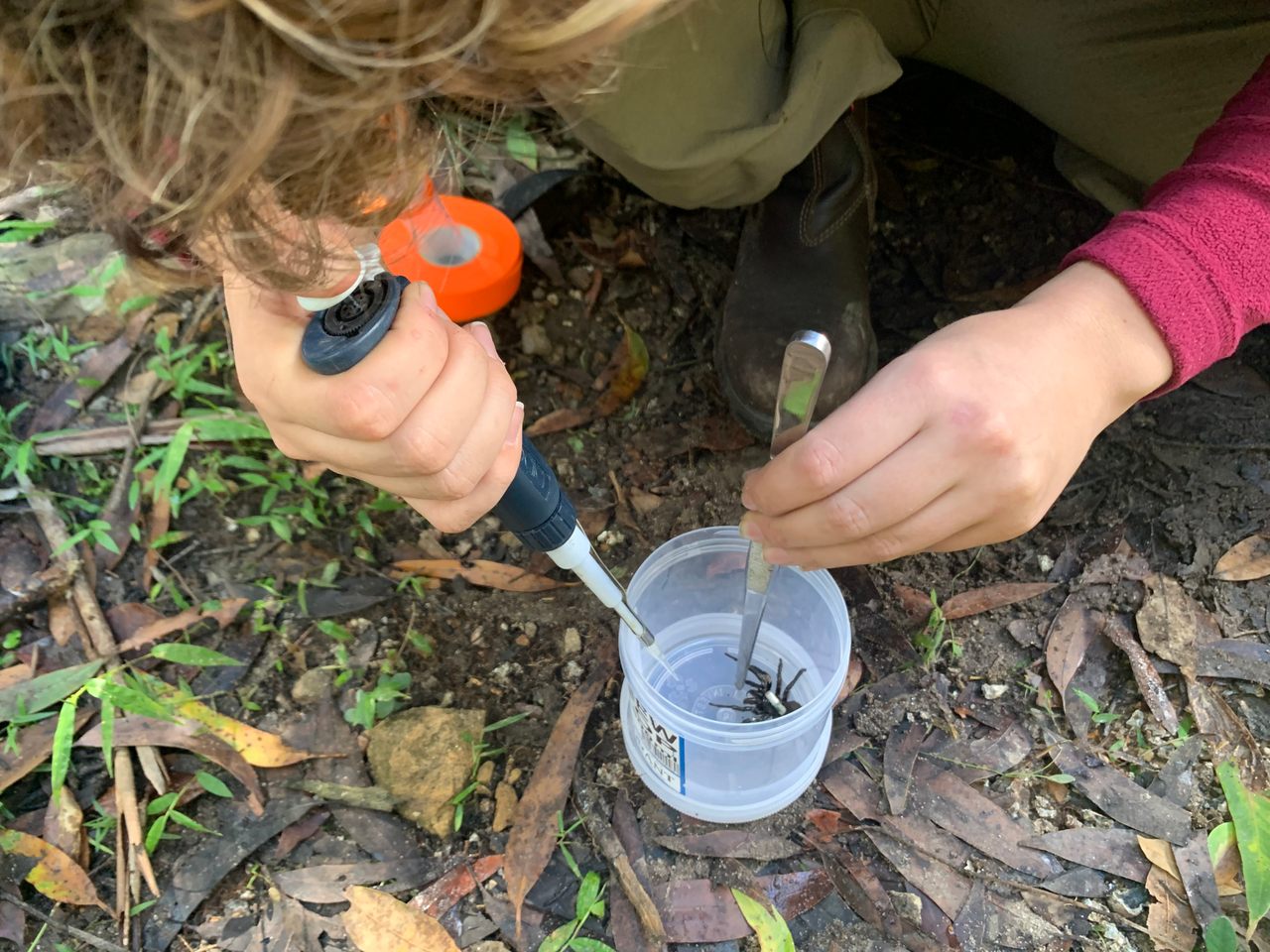 After about four or five minutes of breathing carbon dioxide gas, Caitlin Creak’s eight-legged subject is fully unconscious. Working quickly—she has less than a minute before the spider, named Harold, starts to wake up—Creak pins the creature’s legs under a foam doughnut, leaving the shiny black body exposed. Using an especially strong super glue, she attaches a tracking device, barely larger than a grain of rice, to his back. The next day, she’ll release Harold near where she found him on the outskirts of Sydney, Australia, and study his movements as he continues on his all-important journey to find mates.

Harold and the other participants in Creak’s research are Sydney funnel web spiders (Atrax robustus), the most venomous spider in Australia, a country that certainly does not lack for venomous eight-legged beasties. In children, a funnel web bite can be fatal in as little as 15 minutes. Typically measuring less than three inches long, including legs—record-holder “Big Boy” topped the charts at nearly four inches—the funnel web spider certainly isn’t Australia’s largest, but it’s one many people from cooler regions of the world would likely describe as intimidating, and impressively chunky instead of delicate and spindly.

“These spiders certainly have impressive-looking fangs and very strong bites. They rear up in impressive threat displays and actually drip venom from their fangs, which is very unusual—most spiders try to conserve their venom,” says Samantha Nixon, a spider venom researcher at the University of Queensland. Nixon says funnel web spider venoms are some of “the most chemically complex venoms on the planet, containing over 3,000 peptides.” Researchers are even studying some of the venom peptides from another species of Australian funnel web spider as potential treatments for stroke, epilepsy, and certain types of pain.

But while their venom is well-studied, Creak says relatively little is known about the spiders themselves. “They’re a very understudied species,” says Creak, a PhD student at the University of New South Wales who originally considered becoming a vet before getting hooked on spiders during an invertebrate biology course in university. “We know how many ways they can kill a person, or a rat, which is great, but we don’t know anything about their life history. It’s such an iconic species; I think it’s really important to uncover more.”

There are so many unanswered questions about these spiders: How long do females live in the wild? How do they choose their male mates? What do they do all day while hidden away in their underground burrows? Why have they evolved such extravagantly toxic venom when their prey consists of small animals like cockroaches and snails? (There are some hypotheses, but we still don’t know for sure.)

Creak wants to discover more about the funnel webs’ still-very-mysterious mating habits. The male spiders, she says, spend five to seven years maturing before they’re ready to mate. Mating season—which is typically during summer, but can last through early autumn—is an intense time for them. Males “will spend the whole time mating. They don’t eat, from what we know,” says Creak. “They will just mate as much as they can and then they die.”

While females generally stay close to their burrows, males wander in search of females during the night, seeking refuge in dark, cool places during the day. Perhaps unsurprisingly, mating season is also when humans are most likely to be bitten. (People must also be careful not to leave shoes out overnight, because sneakers could be just the inviting nook the spiders are looking for.)

Creak is keen to know just how far the male spiders travel to find their mates and how many females the males end up visiting. That’s where the tracking device comes in.

But to track a spider, you’ve first got to catch one. This year was an especially good one for the funnel web spiders—a bit cooler and wetter than previous years—and perhaps a challenging time for arachnophobes in the area. When Creak went out hunting spiders at night, “they were just everywhere,” she says. “It was like spider-geddon. It was not hard to find them.”

Once she spotted a spider—“they would just be sort of chilling on the side of the road”—she got out a clear plastic container from her backpack of spider-hunting equipment. “I would just pop it over [the spider] and then just scoop them in with the lid,” she says. “It was easy.”

Creak says that compared to wolf spiders, which are impressively speedy, catching the funnel webs is no big deal. “To me, these guys are super slow, like they just plod along… they can’t climb smooth surfaces, they can’t jump,” she adds. Creak doesn’t wear gloves when she’s catching spiders; bulkiness can reduce dexterity and probably wouldn’t do any good anyway, because the spiders’ fangs, less than a quarter-inch long, can pierce through fingernails and even shoe leather. That’s not to say Creak doesn’t have a healthy respect for these spiders—she’s well aware of the danger they pose. They have, after all, killed 13 people, although thankfully no deaths have occurred since the antivenom became available in 1981. Creak is trained in remote first aid and always carries the appropriate medical supplies.

Once she catches her research subjects, Creak gives each spider a name before attaching a tracking device and releasing them back into the wild, where she hopes they’ll sport the devices for two to four weeks. The longest distance she’s seen them scurry in one night is about 200 feet, but it’s sometimes hard to keep an eye on them. One spider, named Michael-omorph (a pun on her PhD supervisor’s first name and the word “mygalomorph,” a group of spiders to which the funnel web belongs), turned out to be an especially uncooperative research subject. He wouldn’t move for days at a time, causing Creak to worry that he was dead, and later he somehow detached the tracker; Creak found the device, but there was no sign of Michael-omorph.

As Australian summer cools into fall and winter and funnel web mating season comes to a close, Creak’s next task will be to analyze all of the data she collected from Harold, Michael-omorph, and the rest of the boys during their summertime adventures.

While Creak won’t miss every aspect of fieldwork—hunting down spiders to collect their tracking devices in pouring rain wasn’t her favorite thing to do—for the most part, she loves getting to learn more about her eight-legged companions. “I think they’re really, really fascinating and I’m finding it hard to restrict myself in terms of the studies that I can actually feasibly do within the three-and-a-half, four year period that we have to do a PhD,” she says. “If I could, I would do more. I have so many questions, so much that I want to know.”

She also loves spreading spider-knowledge to curious Sydney residents. “I really enjoy communicating with people about how cool spiders are,” she says, “because everyone needs to know.”

But proving the “drunken monkey” hypothesis has been an exhausting—and messy—endeavor.
volcanoes

A look back at the ingenious ways scientists advanced our understanding of the world in 2021.
observatories

Team members at the remote desert site brave challenging conditions to make the most of its clear, dark skies.
volcanoes

Researchers braved storms and monstrous underwater mountains to learn why one region’s earth-shaking is so peculiar.
Video • Gastro Obscura