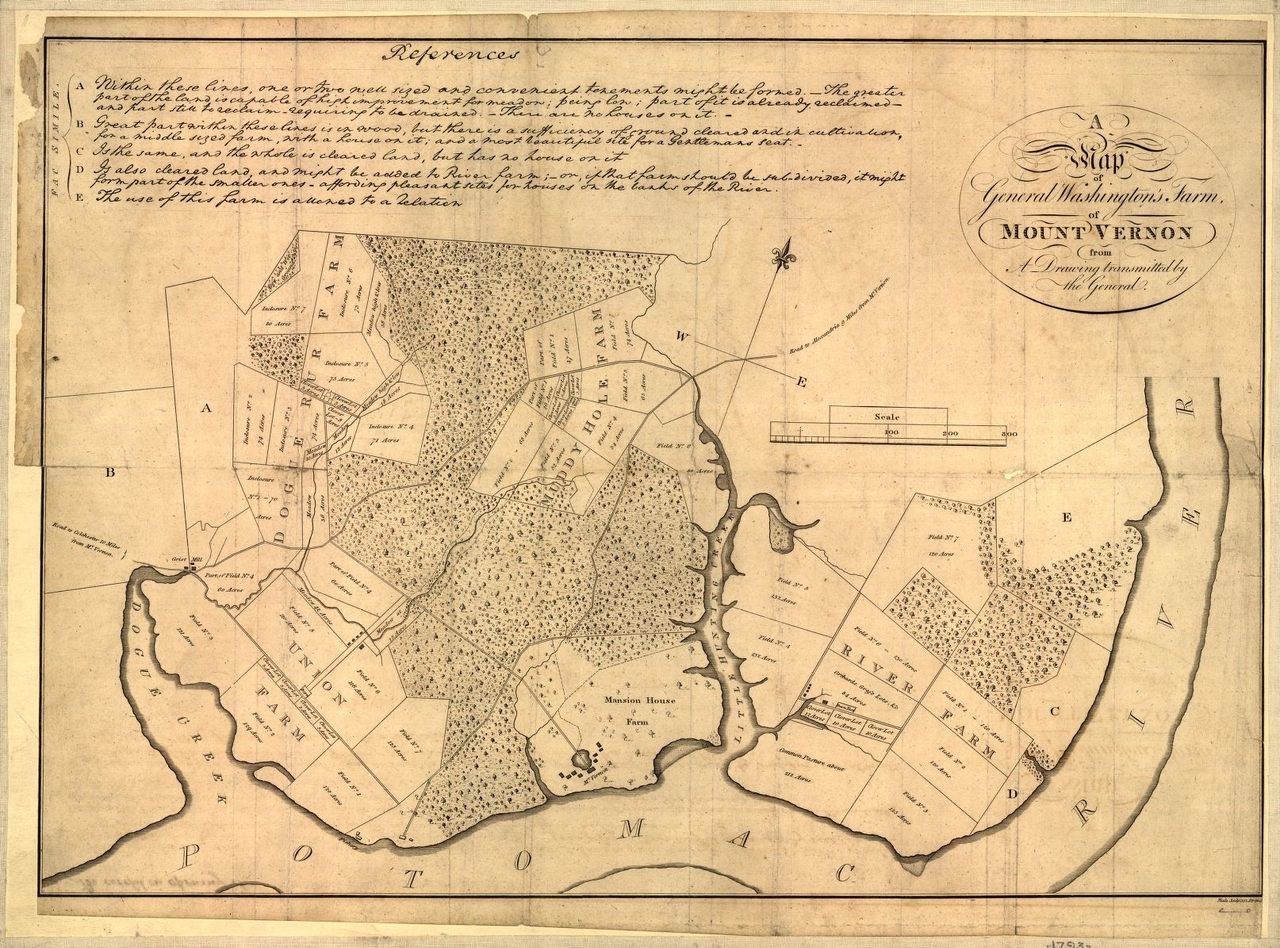 A map of U.S. President George Washington's Mount Vernon estate from a drawing transmitted by the General. Published in 1801. Library of Congress, Geography and Map Division/99466780

We know him as a war hero and the first president of the United States, but George Washington was also a practiced chartmaker and cartographer. He became an official land surveyor in Virginia at the age of 17, and was involved in creating many maps throughout his life, including the map above of his home, Mount Vernon.

Published in 1801 after his death, Map of General Washington’s Farm of Mount Vernon from a Drawing Transmitted by the General depicts the farms on the estate from the eyes and words of the founding father himself. It was adapted from an assortment of sketches and notes in a letter sent to a well-known English agriculture expert, Arthur Young, in 1793. While Washington did not directly draw the final version of this particular map himself, he made many other maps of his farms, as well as maps of the nearby city of Alexandria, Virginia.

As a general, Washington well understood the dire need for accurate cartography. He once wrote:

“The want of accurate Maps of the Country which has hitherto been the Scene of War, has been a great disadvantage to me. I have in vain endeavored to procure them and have been obliged to make shift, with such sketches as I could trace from my own Observations.”

Long before he became commander-in-chief of the Continental Army, Washington had an established career as a land surveyor in Culpeper County, Virginia. He’d originally wanted to join the British Navy, but his mother disapproved, leading him to the field of land surveying. It was an important profession in Virginia, “where colonial settlement was pushing rapidly,” explains Mark Mastromarino of the Washington Papers project. “He gained familiarity with the colony’s back country while developing methodical habits of mind and wilderness survival skills.”

“Between 1747 and 1799, he had surveyed over 200 tracts of land,” writes Edward Redmond, a reference librarian in the Library of Congress’s Geography and Map Division. In addition to surveying terrain and producing charts, Washington also collected and analyzed maps, resulting in a personal library of at least 190 maps.

The Mount Vernon estate had been owned by the Washington family since 1674, with George Washington inheriting the land in 1761. Residing on the banks of the Potomac River, he would end up growing the estate to have an 11,028-square-foot mansion with five different, fully operating farms.

The 1801 map of Mount Vernon is among the first large-scale maps of Virginia to be published at the time. It includes the Mansion House Farm as well as the River, Muddy Hole, Dogue Run, and Union farms, which were the crux of agricultural activity on the estate. Mount Vernon produced a variety of crops, at first planting tobacco and then switching to grains in 1766. Washington devoted much of his life to expanding and developing agriculture and husbandry, searching for expertise on how best to cultivate the land. Between 1786 and 1799, Washington exchanged nearly 30 letters with Arthur Young, a British agriculturist who wrote dozens of books on farming, writes Redmond.

Young offered advice and supplied seeds and equipment, while Washington described the agricultural techniques and practices of the United States. In a 1793 letter, which contained sketches and details that helped create the map, Washington informed Young of the acreage and crops of his farms, seeking advice on renting out parts of the estate. The map gives a detailed visualization of the topography of the farms, roads, structures, and boundaries of the fields as it looked in 1793.

On the top of the map are notes in Washington’s handwriting. His words demonstrate his love of this property, describing the estate as “a most beautiful site for a Gentleman’s seat” and the farm’s “pleasant sites for houses on the banks of the River [Potomac].”