Behold, the alluring glow of the fiery bowl. Sam O'Brien for Gastro Obscura 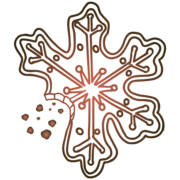 Imagine you’re at a German Christmas market. You’ve probably sipped some mulled wine, nibbled on gingerbread, maybe listened to a children’s choir. You’re just starting to settle into the expected ambience of holiday gemütlichkeit when you see an enchanting blue flame dancing atop a cauldron. It beckons you with its flicker and carries the faint aroma of sweetness. As you get closer, you realize the fire engulfs a giant piece of sugar, which melts in small caramelized pieces into the pot below. Without even knowing the cauldron’s contents, you hand your money to the vendor, take a sip from your mug, and sink into the warmth of the sweet, spiced flavors. Looking back at the stand, you see the name written above: Feuerzangenbowle.

It’s easy to be intimidated by feuerzangenbowle, whose very name can be daunting to non-German speakers. Pronounced foyer-zangen-bowl-uh, the pyrotechnic punch could be considered mulled wine’s metal cousin. To make it, you actually begin with a bowl of mulled wine (gluhwein, in German), then soak a large cone of sugar in rum, suspend it above the bowl, and set it alight. The drink’s name means “fire-tongs bowl,” harkening back to when the burning sugar was held aloft by fireplace tongs.

Even more intimidating than pronunciation are those flames, which can climb quite high depending on how much rum coats the sugar. Hartmut Senkel knows this all too well. Senkel, a mechanical engineer and Nuremberg native, loves feuerzangenbowle so much that he and his partner, Jan Oltznauer, make a 9,000-liter kettle of the stuff in his hometown and in Munich every year. The first time Senkel lit the towering inferno atop the massive steel pot, he remembers getting a bit too close to the fire.

“I let my inner child take over and I burned off part of my hair,” he says, laughing. Singed hair aside, he has fond memories of drinking (normal-sized) feuerzangenbowle with family at home for Christmas and the New Year. He enjoys sharing that tradition with the holiday-market crowds. “It makes me feel warm and tender,” he says. “It’s my roots. It’s home.”

Feuerzangenbowle’s roots can be traced back to punches served at German student parties in the mid-1700s, especially the popular crambambuli. Not to be confused with the cherry liqueur of the same name, this was a nickname German students gave to a flaming cocktail so beloved that it earned its own eponymous song in 1745. While the lyrics fail to describe the drink’s ingredients, introductions in German songbooks of the mid-1800s describe a bowl of rum and sugar that was set aflame. As the students sang, the sugar caramelized and created a drink “of syrupy consistency” that was ladled into glasses.

In his book, Punch: The Delights (and Dangers) of the Flowing Bowl, cocktail historian David Wondrich notes that feuerzangenbowle “can be seen as a mashup” between crambambuli and mulled wine. When, exactly, mulled wine entered the picture and birthed the new beverage isn’t clear, but recipes for feuerzangenbowle can be found in German cookbooks dating back as early as 1905. With this new punch, the process became a bit more complicated than a group of drunk students singing around a burning bowl, with the sugar and rum assuming their new place on the fire tongs suspended above a mixture of warmed red wine and sliced citrus peel.

Feuerzangenbowle didn’t really take off until a film gave it a boost in popularity in 1944. Die Feuerzangenbowle opens with a group gathered around the titular punchbowl, sipping their drinks and reminiscing about their school days. When a latecomer arrives and admits he had only private tutors, they hatch a plan to disguise him as a teenager and send him back to school to experience the shenanigans he missed.

It might seem odd that such a playful comedic romp was released in 1944, in the midst of the most tragic period of German history, but that was part of Die Feuerzangenbowle’s purpose. As supervisor of the then-nationalized film industry, Joseph Goebbels called for movies that would distract audiences from wartime defeats as well as the atrocities of the Holocaust. Although he didn’t explicitly commission the production of Die Feuerzangenbowle (it’s based on a 1933 book), the film is exemplary of the era’s escapist entertainment. As with any piece of art whose creation is tainted by a troubling context, it’s impossible to fully disassociate the film from this history, but it is possible to still enjoy it for its storytelling and performances. And many Germans do: It remains a beloved comedy.

Today, the film and the punch remain intrinsically connected, especially during the holiday season. Theaters and Christmas markets host viewing parties, where people drink and even bring props. Senkel projects the movie near his massive kettle and says that everyone takes a healthy swig from their feuerzangenbowle mugs during a memorable scene involving blueberry wine and a chemistry class.

This year, Christmas markets and viewing parties are cancelled due to COVID-19. But you can still create your own feuerzangenbowle at home. If you’re alone and don’t want to make an entire bowl of punch, fret not. Many market vendors also sell feuerzangentasse, which consists of a mug that comes with its own tiny flaming-sugar-cone holder. Below, you’ll find recipes for both versions. Whether you’re serving a family or treating yourself, enjoy some flaming holiday cheer.

1. If you haven’t purchased a premade sugar cone (available online), there are other options. You can make your own by filling a conical container, such as a pilsner glass, with a mixture of sugar and water (1 teaspoon water for every 1 cup sugar). Pack in the sugar, then carefully tap it out, leaving the resulting cone to dry for a few days before using. In his recipe in Punch, Wondrich suggests that anyone in a pinch swap in a small portion of cone-shaped piloncillo, which is a form of panela sugar available at most Latin American grocery stores.

2. When you’re ready to make your punch, wash the oranges and lemons, dry them, then cut them into slices. Place both in a pot, adding the wine (Pinot Noir or Dornfelder are good choices) and spices. Heat over medium-low heat and do not allow to boil.

3. Gather your equipment. There are designated feuerzangenbowle sets, but if you don’t have one, you can make do with a fondue set, a punch bowl or a pot on a rechaud, or just by keeping the punch in the pot on the stovetop. Feuerzangenbowle sets also come with the eponymous “fire tongs,” but any heat-safe grate—say, the one in your toaster oven—will do, as long as you’re willing to get burnt sugar on it. Place the sugar cone on top of whatever is serving as your “tongs” and drizzle with the rum. An overproof rum (I used OFTD Plantation) will create the most awe-inspiring flames.

4. Using a long-reach lighter, set the loaf aflame. Do not use short matches or a tiny lighter because you want your hands away from the fire. If the flame dies out, ladle on more rum. It is important to drizzle the rum in small quantities, or else you might find yourself faced with a flame stretching to your ceiling.

5. Once the sugar cone and rum have completely melted into the pot, stir and serve in mugs or heatproof glasses. Prost!

Yields one mug of punch.

1. Add the wine, citrus slices, and spices to a small pot. Heat over medium-low heat and do not allow to boil.

2. Gather what will serve as your “fire tongs.” Something like an absinthe spoon will hover perfectly over your mug. (Achtung! Do not use a standard fork. I tried this and, as the sugar melted away, it disrupted the fork’s balance, causing it to fall off the mug and onto the table, spreading little licks of fire I had to extinguish with a blanket. You could, of course, hold the fork in place, but having your hands this close to the flame is its own risky adventure.) If you don’t have an absinthe spoon, you can melt your sugar over the pot with a heat-safe grate (such as the one in your toaster oven). Carefully place the sugar cubes atop either the absinthe spoon or grate and drizzle with just enough rum to coat. Set the cubes aflame. If the flame dies out before the sugar disappears, pour on more rum.

3. Once the sugar has completely melted, stir and drink.

Knock out the year with an elixir that can pacify an army.
holidays

This 19th-Century Cocktail Still Fights Cold Nights in the Midwest

The Tom and Jerry is a Christmas staple.
history

Join us for a daily celebration of the world’s most wondrous, unexpected, even strange places.
holidays

One of the oldest wine cellars in Germany is now a restaurant beneath Bremen's town hall.
Want to see fewer ads? Become a Member.
From Around the Web
Atlas Obscura Trips
Hidden Berlin: Exploring the City’s Abandoned and Underground Spaces
View This Trip
Thanks for sharing!