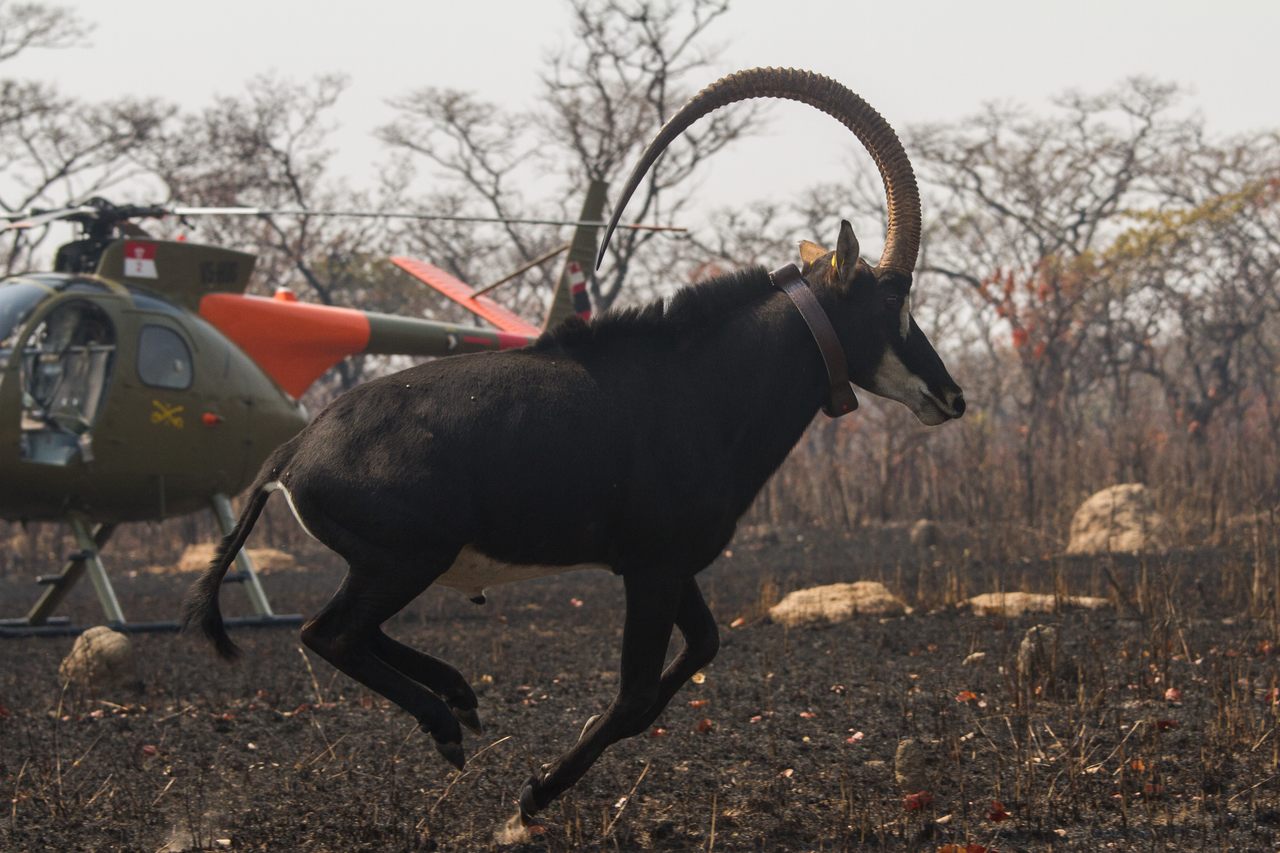 The giant sable bull arrived dangling beneath a sunny-yellow helicopter, its four-foot-long horns curving back toward its flanks like the bucket of a backhoe. As it came into view, the hundreds of people who had been waiting to greet the massive antelope at the dry, grassy edge of Angola’s Luando Strict Nature Reserve broke into tears, song, laughter, dancing. For the Angolan people, the giant sable is a national symbol, adorning everything from soccer jerseys to postage stamps. But this giant sable represented something even greater—hope.

After the helicopter pilot deftly delivered the tranquilized bull to the ground, a group of shepherds and scientists rolled it onto a stretcher. As a dozen people hoisted the stretcher into the belly of a second, larger helicopter, the crowd pushed forward. Some people tried to get one last glimpse, others hoped to hug or shake hands with curly-haired biologist Pedro Vaz Pinto, who stood nearby, looking a little dizzy with disbelief. Somehow, against enormous odds, he had just led a team in tracking, tranquilizing, and transporting the 500-pound bull, which would journey another 60 miles north to Cangandala National Park, where it and nine female giant sables would comprise the world’s first captive breeding program for the nearly extinct animal.

“It was an absolute magical moment,” Vaz Pinto says with an incredulous smile during a Zoom call 11 years later. Though Vaz Pinto has enjoyed many magical moments over the course of his 20-year mission to save the charismatic ungulate, the creature’s future remains fraught.

The giant sable is found in Angola’s largely undeveloped interior—when it can be found at all. No foreigner laid eyes on one until 1916—four centuries after Portuguese explorers first landed on Angola’s shore—and not for lack of trying. The antelope is notoriously elusive, and also long enjoyed the cover of the Lwimbi and Songo tribes, who often denied its existence to outsiders and deliberately misled trophy hunters attempting to bag a palanca negra gigante, according to journalist John Frederick Walker’s book about the giant sable. For locals, the creature was a totem, the tip of its horns a portal into the spirit world. Walker describes it as “almost heraldic in its stateliness, more like a proud beast from legend than one of this earth.”

But even the giant sable wasn’t spared the carnage of Angola’s brutal, 27-year civil war. In the early 1970s, before the conflict, an estimated 2,000 giant sable inhabited the miombo woodlands in two of the country’s preserves, the Luando Strict Nature Reserve and Cangandala National Park. By 2002, when the war finally ended, no one knew if there were any left at all.

“Nobody could tell me for sure,” says Vaz Pinto, who returned to his native Angola from Portugal at war’s end. He had taken a job as an ecologist at Quiçama National Park, but curiosity about the status of the sable gnawed at him. “For a biologist who likes adventure, this was too much to ignore.”

Vaz Pinto decided to do some reconnaissance work. In 2004, he installed motion-activated cameras in Cangandala National Park, strapping the devices to trees near termite mounds where giant sables—grazing herbivores—might visit to eat the sodium-rich dirt. Because there was nowhere nearby for him to develop the film, Vaz Pinto mailed each spent roll back to his mother in Portugal. One day, about a year into the effort, she called with some promising news. “She said, ‘There’s a lot of brown animals in this one,’” Vaz Pinto remembers with a chuckle. He asked her to be more specific. “Brown, kind of reddish?” she tried again. Vaz Pinto had to wait an agonizing week to get the pictures in the mail, but when they arrived, it took the biologist mere seconds to know that he was looking at the first photograph of a giant sable in nearly three decades.

With evidence that the giant sable endured, Vaz Pinto was able to secure public and private funding to establish the Giant Sable Conservation Project. “I thought it would be easy,” he says, “I thought there would be more.”

Instead, subsequent photos began to reveal new crises. For one, they always showed the same nine animals, suggesting that the giant sable was holding on, but just barely. More worryingly, there didn’t appear to be a bull among the group. And something else about the photos began bothering Vaz Pinto. “Some of the animals looked a bit funny,” he says. “They had floppy ears and clownish faces.”

So he began tracking the herd on foot. When Vaz Pinto finally succeeded in catching up with them, what he saw confirmed his worst fears. Standing in the middle of a harem of females was a roan bull, a completely different species of antelope. Left without a sable bull, the female giant sables were mating with the roan and giving birth to hybrids. Vaz Pinto knew that with only a handful of pure sable left, hybridization would doom the animal to extinction in short order. “The sky fell on my head,” he says.

If the tiny sable population in Cangandala was going to survive, Vaz Pinto wouldn’t just need to separate the pure females from the hybrids, he would also need to deliver them a giant sable bull.

Vaz Pinto quickly devised an ambitious plan. He would recruit all the help he could and build a 17-square-mile enclosure in Cangandala National Park. Meanwhile, he would begin scouting for a bull in the nearby Luando Strict Nature Reserve, where giant sable had historically roamed but hadn’t been spotted in years. If all went according to plan, in the summer of 2009, Vaz Pinto’s team would carry out the intrepid translocation mission, moving the nine females and one yet-to-be-found male via helicopter to the enclosure at Cangandala.

“I thought the chance of us finding a male were small,” says Pete Morkel, the wildlife veterinarian Vaz Pinto recruited for the effort. “In fact, I told my wife it was probably a waste of time.”

With the help of area shepherds, Vaz Pinto began collecting and testing dung for evidence of giant sables—nearly identical in appearance to roan dung—in the Luando Reserve. One month before the group had scheduled their translocation mission, a sample came back positive for male giant sable DNA.

“We were so lucky,” says Vaz Pinto. But finding DNA didn’t mean that locating the actual animal would be simple. The Luando Reserve is about 3,200 square miles (the size of Delaware and Rhode Island put together), the landscape a hypnotic collage of browns and tans.

And then, when he needed it, Vaz Pinto had another one of those magical moments. On the first day of the translocation mission, without any other leads to go on, the group chose to begin their aerial search for the sable where his dung had been collected. When they arrived, the bull was standing in that very spot, as if he knew they were coming. Morkel tranquilized the animal from the air and the group rushed to tag and place a GPS collar on him.

A couple weeks later, after the females had all been moved to the enclosure one by one, the group flew back to Luando to collect the bull. Because the journey to Cangandala required more fuel than the team’s small helicopter could carry, the crew stopped briefly to transfer the sable to a larger aircraft, providing the locals time for their impromptu farewell party and hugs for Vaz Pinto.

In the decade since, the captive population has run into several challenges, including the unexpected infertility of several females and an aggressive bull that joined the enclosure, leading to the death of another male sable in 2011. Funding, Vaz Pinto laments, has been a constant struggle, especially during the pandemic, when longstanding corporate donors withdrew financial support. Angola’s current economic depression is also a major concern, as more people turn to poaching to survive.

But for the most part, the herd has thrived. Today Vaz Pinto guesses there are more than 100 sable living in Cangandala National Park. “It’s been a spectacular success,” he says, while acknowledging the species is still perilously endangered. Between the populations at Cangandala and Luando, only about 300 of the antelopes remain.

For Vaz Pinto, who never meant to devote two decades of his life to the giant sable, his continuing role in its survival is both an honor and an obligation, and he hopes he can soon step away.

The biologist who likes adventure admits he’s itching for a new one. “In a way, I feel like a doctor in the ICU eager for the patient to be discharged—not because I don’t love what I’m doing, but because it will mean the job is done and the patient can move on,” he says. “I want to stay linked to [it] forever but I am eager for the day the giant sable has been discharged from the ICU.”

The Chef Cooking a Cicada Recipe for Every Palate

Biruté Mary Galdikas has quietly fought on the frontlines of some of conservation’s biggest battles.
Video • AO Docs