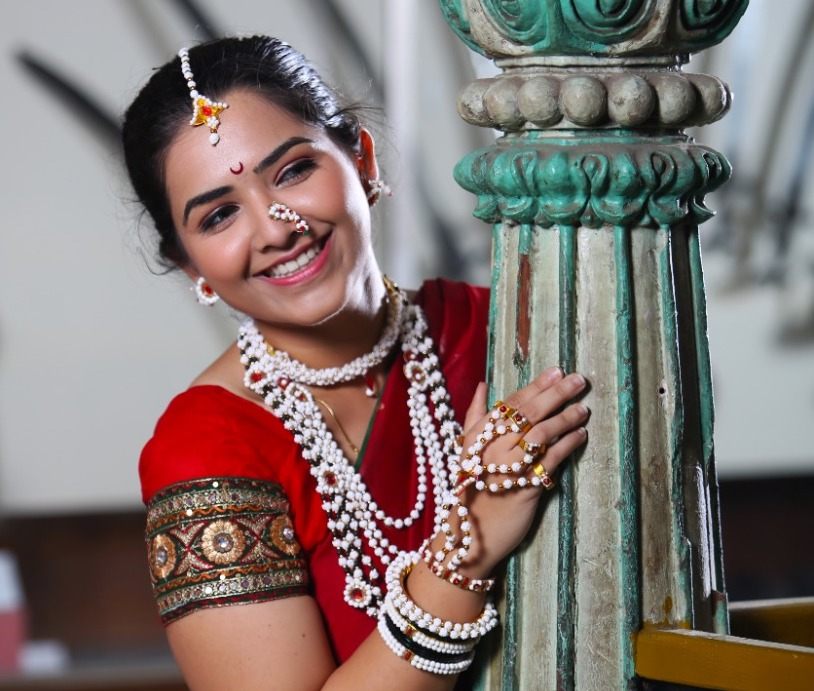 Decked out in a black silk saree and pearly white beads, my neighbor’s daughter Medha handed out tilgul and sought blessings from the elders. “Tilgul ghya goad goad bola,” she repeated to the youngsters of the family, telling them to “take this tilgul sweet, and talk as sweetly.” This was her first Sankranti festival celebration after marriage. The white beads she wore, though, weren’t pearls. Instead, the tiny spiked spheres threaded around her neck were the same candies that she passed out to her family.

Tilgul are similar to the sugar balls that are usually distributed in temples around the year all across the country. But in the western Indian state of Maharashtra, they are also used to prepare special jewelry. Halwa dagine is usually worn by newlyweds to celebrate their very first Sankranti festival as a couple, and by newborns on their first Sankranti after birth. Pregnant women also sometimes indulge in the jewelry for their baby showers.

Sankranti is celebrated in January all across India, marking the northward movement of the sun and the start of harvest season. Sweets made with sesame seed and jaggery are common. Since Sankranti is a festival of abundance, Maharashtra’s halwa dagine symbolizes the wearer’s hope for future blessings.

In olden days, the women of each household made the beads for halwa dagine at home, preferably in the early mornings before the day turned warmer. The cooler temperature allowed the spikes to form on the surface of each candy. My mother, Asha Bhagwat, a septuagenarian gynecologist, fondly remembers her mother-in-law making halwa. “Then we knotted and strung the beads to make jewelry for me,” she says. “As a kid, I also saw my aunt wear halwa dagine during her pregnancy.”

In her day, preparations for the festivities started well before January. All women of the household gathered to make ornaments like bangles, necklaces, waistbands, and armlets.

The process is simple but time-consuming. Cooks pour spoonfuls of sugar syrup over sesame seeds in a heavy-bottomed pan on low heat. The coated seeds are vigorously stirred to keep them separate. According to my mother, it takes five to seven days to make a bead. “The next layer of sugar syrup can only be added after the previous one hardens,” she explains. It takes a cup of sugar to cover just two tablespoons of sesame seeds. For larger beads, women used sago pearls or pumpkin seeds instead of sesame.

Then, the women would carefully store finished halwa beads away from moisture to keep them from softening. Since the beads lack a hole for string, these artisans patiently knotted them with thread into intricate designs.

The method of making halwa beads is similar to how Portuguese confeito and Japanese konpeito confections are manufactured. Konpeito are traditional gifts for weddings and childbirths, and confeito almonds are also distributed during baptism and marriage celebrations in many European countries. However, sugar-ball jewelry is a uniquely Marathi tradition.

Sugar sweets date back to ancient India. With sugarcane a native crop of the subcontinent, Indians started making sugar, known as sakkara in Sanskrit, as early as the 5th century. The technique of making crystallized sugar was called khanda. The English word “candy,” in fact, is derived from the Sanskrit khanda.

Sakkara soon travelled as a luxury commodity via trade routes to the rest of the world, becoming shakkar in Persian, sucre in French and, later, sugar in English. But while the history of crystallized sugar is traceable, it is unclear when sugar balls began to be used for jewelry in western India. Some historians believe that they may have been a stand-in for more expensive pearls, but their true origin is unknown.

Today, the art is slowly disappearing from homes, though some women still make sugar ornaments themselves. Pushpa Date of Indore City is a small-scale entrepreneur who creates customized halwa jewelry, such as necklaces, bangles and amulets. The demand comes mostly from families in her neighborhood. “I made the beads at home until some time ago,” she says. “But now, with my growing age, I sometimes buy the halwa to make jewelry to order.”

In modern times, few have the patience, time, or the inclination to make either halwa beads or the jewelry. Some commercial establishments have recognized the need for halwa dagine and stepped up to provide a variety of ornaments and designs. Sonia Patankar, owner of Pune’s famous 50-year-old snack and sweet business Khauwale Patankar, began selling halwa dagine in the 1990s after seeing her mother-in-law’s skill in the art of sugar jewelry. Patankar employs local women to prepare halwa three to four months before January and sells jewelry for both women and men to wear from head to toe. A set, which may include a tiara, necklace, nose pin, hair embellishments, waistbands, bangles, toe rings and more, usually costs 2,500 to 3,000 rupees, or around 35 to 40 US dollars.

The Patankar family also asked their customers to send in photographs of family members decked out in their sweet jewelry. The response proved to be more than enthusiastic. “One of our customers sent a photo of their daughter-in-law, a Japanese girl, dressed up in typical Maharashtrian attire complete with halwa jewelry,” says Patankar.

These days, the simple jewelry of yore looks quite different. Mostly, it’s been streamlined for convenience. Elaborate pieces aren’t easy to make, in many cases taking time and great skill to knot the beads together. Some of the commercially available jewelry is made by sticking halwa beads on designs cut out of cardboard or flexible foam sheets.

But even in this form, halwa dagine remains a treasured part of a special holiday. If stored properly, the ornaments can last long enough to be passed from sibling to sibling as they marry. But for those unwilling to go to the trouble of packing the beads away, the lovely jewelry can always be dismantled and eaten with gusto.

Bear in mind, it's not actually edible.
art

The Life and Times of a Japanese Candy Artist

She brought the rare, age-old art to Epcot and a Yayoi Kusama exhibition.
libraries

To be ready by Christmas, you better start baking in August.
Video • Wonder From Home