How Do You Decode a Hapax? (Also, What’s a Hapax?) - Atlas Obscura
Want to see fewer ads? Become a Member. 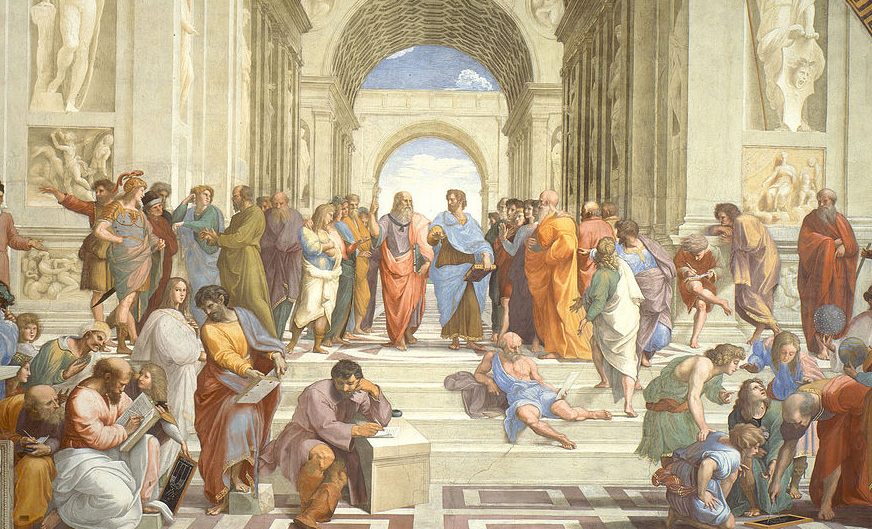 The School of Athens, 1511. Public Domain

The story of the werewolf is perhaps the most famous anecdote from Petronius’ Satyricon, a staple of Latin literature written in the first century. In the tale, a guest at a dinner party offers a marvelous tale of transformation and mystery. A Roman slave and a houseguest rush off into the night. In a cemetery shrouded by ethereal moonlight, one of them is delivered of his human form and given new life as a ferocious beast.

In addition to its absurdity, the werewolf episode is special for its language. In the entirety of Latin literature, the only known usage of the word “apoculamus” (“we rush off”) is in section 62 of the Satyricon. As a result, this verb is considered a hapax legomenon, a word that occurs only once in a text, an author’s oeuvre, or a language’s entire written record.

The Satyricon contains a number of hapaxes, including “bacalusias” (possibly “sweetmeat” or ”lullabies”) and “baccibalum” (“attractive woman”).

Hapaxes are not limited to Latin. They appear in every language, from Arabic to Icelandic, even English. But where do these words come from, and what is their purpose?

Various theories have been posited about the role of hapaxes. In a 1955 lecture, philologist Joshua Whatmough suggested that the poet Catullus inserted them to draw attention to a specific moment, just as poet Ezra Pound would do centuries later. Others hold that authors do not pay attention to the frequency of specific languages in their writing, suggesting that words become hapaxes only by chance.

There are various methods applied to translate hapaxes that aren’t conventional words. In the case of “apoculamus” from the Satyricon, classicists can use context and precedent to define the term. At this point in the story, the narrator is describing how he and his companion departed from their house. From the ending “-mus,” we know that this word is a first-person plural, present, active, indicative verb. Therefore, “apoculamus” can be interpreted as a form of movement.

Given the influence of ancient Greek on Latin, scholars have also relied on etymology for translation hints. The prefix “apo” means “away from” and the noun “culum” refers to a person’s buttocks. Hence, “apoculamus” might be defined as “hauling your posterior away from” something.

Some scholars disagree with these suggestions, arguing that “apoculamus” was not in the original text. The Satyricon has come to us in fragments, which means that the language might not be accurate to the original version. Therefore, it is possible that Petronius used a different verb, which was miscopied by a scribe at some point. Like the game of telephone, the most recent copy of the novel may have been altered from its initial form, prompting scholars to question the correctness of “apoculamus.”

There are a number of words from classical Greek and Latin that we will never be able to translate with certainty. One that has stumped scholars is “πολεμοφθόροισιν” (“polemophthoroisin”), which can be found in line 653 of Aeschylus’ The Persians, a Greek tragedy written in the fifth century B.C. The play narrates the return of the Persian king Xerxes from Greece, following his disastrous defeat at the Battle of Salamis. In this scene, the chorus is praising the former king, Darius, who is remembered as a just ruler for not “prompting the downfall of his men through meaningless wars,” as opposed to his son. Based on context of the section, classicists assume that the term relates to war in some way. “πόλεμος” (“Polemos”) was, for the Greeks, the divine personification of battle, while “φθείρω” (“ftheiro”) translates as “destroy.” Hence, the combination of the two might mean “destruction by war,” which is what Xerxes has done by attacking the Greeks.

Catullus, a poet who wrote in Latin during the first century B.C., used hapaxes often, “ploxeni” in Poem 97 being an especially notable example. The word is of Gaulish origin and refers to a “manure wagon,” a term put to perfect use in this invective against a man named Aemilius. The poem is a virulent attack on his appearance and malodor. Catullus describes Aemilius’ gums as “looking like a manure wagon” on account of their filth. The term “ploxenum” was not used in any other poems, likely due to its obscure derivation.

In Homer’s Iliad, written around the eighth century B.C., we find a hapax in book 2, line 217. The poem chronicles the epic battle between the Greeks and Trojans after the Spartan king Menelaus’ wife, Helen, was abducted by Prince Paris of Troy. Odysseus, the craftiest soldier in the army, is inciting the Greek troops to arms with an stimulating oration. However, he is interrupted by Thersites, a man described as unattractive and odious. Though he is characterized in only a brief passage, Thersites receives the harshest of words: “evil-favored” with “disorderly thoughts” and “rounded shoulders.” The term “φολκός” is among these details. This hapax has been translated as “bow-legged,” an apparent blow to Thersites’ honor.

It is estimated that there are thousands of hapaxes in the Bible. Greek and Latin literature allow us to translate many of the terms from the Septuagint or the Vulgate, the Koine Greek Old Testament and the Latin Bible, respectively. However, since the Old Testament is almost all we have of the ancient Hebrew language, hapaxes can be restrictive. The Song of Songs, which is the last section of the Tanakh and part of the Christian Old Testament, contains an especially high number of hapax legomena, forcing scholars to rely on the Greek version for translation hints. The Song of Songs is, at the surface, a story of love between a man and a woman, in which they describe their passion for each other. It has the greatest number of hapaxes in the Bible, rendering the book enigmatic and mysterious. For instance, in 4.13, the male compares the lady’s “selahim” to an orchard. The term is a hapax, but scholars have suggested “branches” as a translation, such that the text describes the woman’s body.

A linguistic phenomenon similar to hapaxes is the nonce word. Authors can, in effect, produce hapaxes by creating words. Shakespeare is famous for his frequent usage of such terms. In the Taming of the Shrew, a play about matrimony and courtship, the main character Katherina, describes herself as being “bedazzled” by the sun. This word was coined by the bard for this scene, but has now received commercial fame courtesy of a rhinestoning device.

Despite the uncertainty that comes with hapaxes, one thing is clear: these words form an intriguing linguistic phenomenon, one which we may never be able to solve.

How potboilers and pin-ups showed gay and bisexual women they were not alone.
time

The physics, neuroscience, linguistics, and philosophy behind a little bit of time.
games