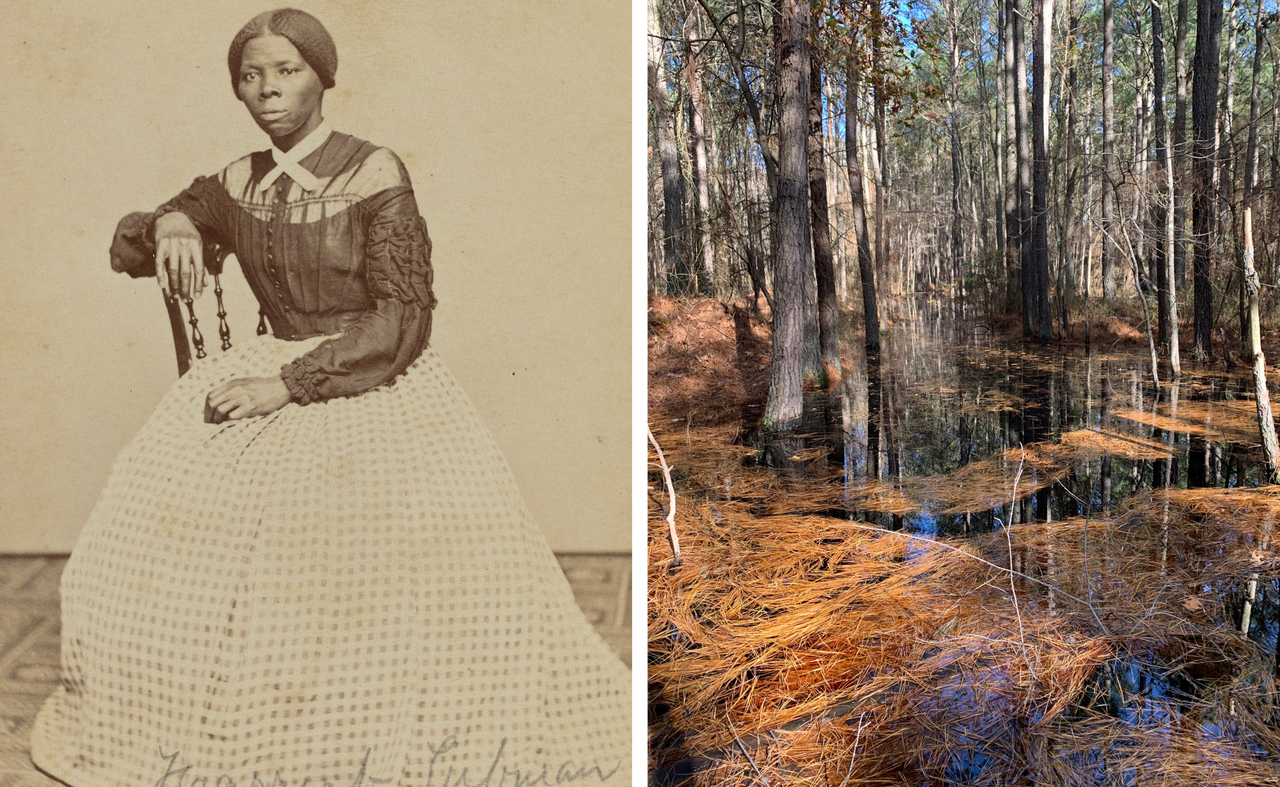 Tubman, photographed here in the late 1860s (left), knew the land well, and used that knowledge to help guide dozens of people out of slavery through the Eastern Shore (right). Collection of the National Museum of African American History and Culture shared with the Library of Congress/Public Domain; Courtesy Julie Schablitsky
In This Story
Destination Guide

There were days when even four-wheel-drive was no match for the water. It was November 2020, and Julie Schablitsky, chief archaeologist at the Maryland Department of Transportation State Highway Administration, was trying to navigate swampy terrain in the Blackwater National Wildlife Refuge, in Dorchester County on Maryland’s Eastern Shore. Some days, it was impossible: After a rain, water pooled on the roads. Even when the crew could get through, the murky liquid breached their boots. When Herschel Johnson, a local history buff who grew up in Dorchester County, tagged along, his boot found a hole that sucked it clean off his foot. It’s long been a wet place, but now the water is rising. “Land that may have been dry 20 years ago is now under two or three feet of water,” Schablitsky says. “This is an area that’s threatened. The water is beginning to consume archaeology. Whether it’s inundating it so we can’t have access to it or whether it’s washing back out into the Chesapeake Bay and the rivers, once it’s gone, it’s gone.”

With ducks and geese honking and sika deer scampering through the phragmites, Schablitksy and her team dug 700 holes along more than a mile of road. They worked quickly and carefully in their search for traces of families that had lived there long before—and one family in particular. They were looking for the home of Ben Ross, father of Harriet Tubman, one of the busiest conductors of the Underground Railroad.

Born Araminta Ross, she married John Tubman and renamed herself Harriet, after her mother. As an adult, Harriet Tubman helped about 70 enslaved people flee through and hide within the landscape, living off the creatures it provided, and she passed her knowledge to several dozen more. “This place we’re looking for, where she grew up, this was her training ground,” Schablitsky says. “This is what gave her the tools and experience to be successful as a conductor of the Underground Railroad.”

Experts had been looking for this site for at least 20 years, says Kate Clifford Larson, a Tubman biographer. Before the search for Ben Ross’s cabin began along Harrisville Road, there was a misconception about where Tubman had been born. Local papers in another nearby town, Cambridge, had reported on Tubman’s roots in the 1940s, but a 1943 biography by Earl Conrad placed her birthplace in Bucktown, and the town began claiming her as a daughter, Larson says. That idea lost traction when researchers found a note in the account record of the Thompson family, who enslaved Ross, indicating that they had hired a midwife to help deliver a child in 1822—presumably Araminta. Court records from the 1850s also set Tubman’s birthplace on the Thompson plantation; she and her mother would be enslaved by the Brodess family, who hadn’t yet moved to Bucktown. “It’s a fascinating study about how memory shifts when certain people become empowered to tell their version of the story,” Larson says. For years, the former Thompson land was privately owned. Now, much is government-owned, and deed-mapping efforts are ramping up, as is work to map census records of enslaved and free Black residents.

Over two weeks in the fall of 2020, Schablitsky’s team unearthed several compelling artifacts, but no definitive proof of the Ross cabin. But when they returned in the spring of 2021, they uncovered additional artifacts—nails, bricks, dish fragments and even a button dating to the 1820s, ’30s and ’40s. “That’s when we knew that this is it,” Schablitsky said after the discovery.

Larson hopes researchers will continue to search for more slave cabins nearby—including one where Tubman may have been born—which were likely closer to the original Thompson house, she says. “It’s not just about Harriet Tubman—it’s about the communities that helped raise her, educate her, keep her secrets,” Larson says. “Reading the landscape, night sky, marshes—she learned that from the communities there.” It could also be a boost to current neighbors, Johnson says, particularly if the cabin becomes an interpreted site that attracts visitors. “The people who enslaved African Americans thought of Harriet as being a crook or a thief. Because she helped people in this area run from slavery, we weren’t taught about her in school,” says Johnson, who has helped restore a one-room school for Black students dating to the 1860s in Cambridge. “I found so much out about her as an adult. If the cabin was found, it would do a lot for tourism and Dorchester County.”

Atlas Obscura spoke with Schablitsky before the discovery of the Ross cabin about historical detective work, animal bones, and more.

How did you know where to start looking?

We don’t have a map. We don’t have, “This is where Ben Ross lived.” We have a survey area based on historical documents. We have some deeds that talk about “Ben’s place.” We have a will from Anthony Thompson, his enslaver, that talks about how Ben will be given 10 acres bounding west of the road—what road, we don’t know—and that he can use the rest of the property for logging and whatever else he needs.

He was emancipated five years after Thompson’s death, and Thompson’s farm was sold off over time. As it gets sold off, each of those parcels may be given to another family, and that narrows down the location where Ben may have been because there are mentions of “Ben’s place.” So you get this narrowing down of the search area.

We are digging in inundated soils, where there’s sloppy soil to push through screens. We’re not avoiding areas that are not really livable today but would have been livable back then. So as we go along these road systems that existed during the time of Ben Ross, we’re looking for evidence of his home and his neighbors’. As we’re walking along, we’re finding nothing, nothing, nothing, nothing. We found a home from the late-19th or early-20th century, but that’s not old enough. So we kept going and along Harrisville Road, we found evidence of a mid-19th-century house site. We need to go back to confirm that’s what we have. That may be Ben Ross’s home, but we have to make sure we exclude other areas before we can unequivocally state that this is indeed the place where he lived. We’re looking at the Thompson farm to find out if there are more places where Harriet could have been born. We don’t know if “Ben’s 10” in the records is his original slave cabin or a second home.

What kinds of goods did you find during the excavation? How did you know they were from a homestead?

Food is one way we try to determine whether we’re looking at someone who was impoverished and enslaved versus someone who may have been a bit more affluent. You can do that through the animal bone. The higher cuts of meat, the bones of the choice cuts, those are going to usually be consumed by people who have means. Enslaved people and people who have less money got the heads and the feet. Sometimes you see a heavier reliance on the wild fauna—raccoon, fish, muskrat, other animals captured in the wild.

You’ll see broken teacups and plates, bottle glass. High concentrations of those tell us that we have a home site versus, for example, a mill, which would have been near the water as well.

We found some artifacts that were manufactured too late, and others that showed us we’re in the first half of the 19th century, which would have been the time Ben was occupying that space. Those plates are decorated a certain way—they have a glaze that might have a little more of a blue tint in it.

With bottle glass, sometimes the color will tell you what year you’re in because of the types of chemicals that would have been added. For example, we sometimes find amethyst-colored bottles. The 1870s to around World War I is the time period when people began to add manganese to glass to make it clear. What happened when the sun hit it was that it turns this amethyst color. If we find that, we’re like, “Well, this is too late. Ben was gone by that time.” Those are little details that we get into as archaeologists—diagnostic manufacturing techniques and patterns that are datable. We have an 1808 coin that I found on the road, just beyond where the house site was, and that tells us that this road is over 200 years old.

How will you know you’ve found the Ross house, as opposed to another home from the same period?

Archaeologists, as we dig holes in the ground and don’t find anything, always kind of joke that negative data is still data. You look for it, you come up empty-handed, and you have to go back to the drawing board. In our sense, that means going back to the maps and historical documents and beginning to tease out and ask different questions to get us where we should be looking.

We’ll know we’ve found it when we don’t find it in other places. Since we’ve only found one site so far, if we search within that search area and find nothing else that matches what we know about Ben Ross and his occupation, then it’s like it’s guilty by exclusion.

This story was updated in June 2022 to include information about the discovery of the Ross cabin.

Genetics has many stories to tell about enslaved people.
shipwrecks

This slave trade is well known to historians, but this is the first known wreck from it.
caves

In 1892, a newspaper described a cave that sheltered 21 formerly enslaved people. Ohioans are still looking for it.
Video • Wonder From Home