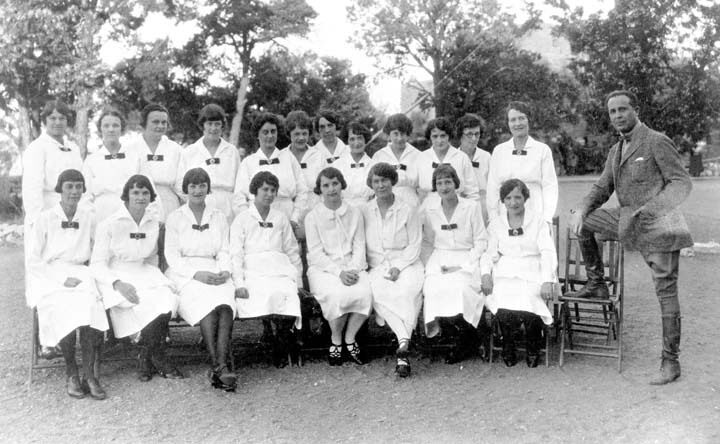 When Nell returned to the breakroom, her waitress’ apron was full of money. Her coworkers, spotting the dollar bills, laughed. “Them ain’t tips,” said one waitress. “Them is dates, ain’t they, Nell?”

Nell displayed the cash to her friends. “Sure,” she said. “Be thankful for a dollar in these hard times!” Nell wasn’t the only waitress in the Chicago restaurant who found herself turning to some form of sex work, from casual dates in exchange for clothes or gifts, to sex acts in exchange for money. There was Marietta, who went on dates and engaged in other “unquotable” activities for tulips and candy, and Daisy, who beefed up her meager tips with sex acts under the table. But the sexualization wasn’t always so overt. As the women smoothed on their uniforms for another backbreaking shift, they knew a simple truth: If you want your tips, you’d better smile.

The year was 1917, and the waitresses worked in one of the many casual restaurants multiplying on Chicago’s streets. Frances Donovan, a University of Chicago-trained school teacher and sociologist, had gone undercover to work among them. The result: The Woman Who Waits, a groundbreaking ethnography of the early restaurant industry published in 1920. But read through Donovan’s book on the relationship between sexuality and tips, and you may well feel you’re reading the news.

“When you are hired as a waitress, it might as well be a part of the manual. You will be sexually harassed,” Alison Baker, a server at a Mexican restaurant in Chicago, told The Guardian in 2017. “You are relying on this person for your wage, so you can’t say anything.” Since the #MeToo movement swept American workplaces in 2017, stories like Baker’s have increasingly made the news. It’s no wonder: Restaurant workers are stunningly vulnerable to sexual harassment, with 80 percent of women servers reporting sexual harassment from customers, two-thirds from managers, and half from other staff. With a national tipped minimum wage of $2.13 an hour, many servers such as Baker often feel compelled to put up with unwanted sexualization—from lewd comments to sexual assault.

But the history of sexual harassment in waitressing goes deeper than tipping. Since the days of colonial taverns, women who serve have often been considered—by government officials, customers, and even courts—sexually available. For some servers, unwanted sexual attention was an unfortunate reality of the workplace. For others, like the waitresses who offered both liquor and sexual services in Gilded Age saloons, sex work was part of the job description. From steamy dance halls to staid lunch counters, sexual harassment and sex work are deeply entrenched in the history of America’s restaurants.

Alice Thomas would have known. A tavern-keeper in colonial Boston, Thomas was convicted of harboring “Lewd Lascivious & notorious persons of both Sexes, giving them opportunity to commit carnal wickedness.” She was one of many female tavern keepers in colonial America whose drink-heavy establishments catered to weary travelers and thirsty locals. As Alison Owens writes in her history of waitressing, their association with drinking sometimes led their communities and the government to label them women of “lascivious” morals.

This stigma persisted for the women who worked in the entertainment districts of America’s rapidly growing cities. From the late 1800s to Prohibition, the newly electrified saloons of New York City’s Tenderloin and Chicago’s Levee district had live music, dance shows, crowds of men, and female staff who, for an additional fee, sometimes offered visitors sexual services in private boxes. Due to paltry salaries, sex work was necessary to make a living. Considered a threat to public morals, the goings-on were documented by vice investigators of the time. “I picked out a blond waitress and went up with her on the upper floor,” writes an undercover investigator who visited a New York City saloon during World War I. “When she was ready to lay down she asked me for money.”

Women widely found the line between sex work and service jobs rather thin. “Many of these occupations (dance hall hostess, waitress, department store clerk, factory worker, domestic worker) made the difference between ‘pleasing’ male customers and male employers and occasional prostitution seem rather arbitrary,” writes Ruth Rosen in her history of American sex work. Some women stuck to the “legitimate” service economy, choosing to refrain from sex work; others found prostitution a preferable option to backbreaking, low-wage kitchen work. As one 26-year-old New York City prostitute told the vice commission, “I won’t be a dog in anyone’s kitchen.”

For government agencies, including the Vice Commissions, which studied public morals, the implication was clear: All working class women were morally “tainted” by sex work. “The assumption was [that] all working class women were prostitutes,” says Mary Linehan, a professor at The University of Texas at Tyler who researches the history of sex work in Chicago. A Chicago Bureau of Labor Statistics Report from the time deemed restaurant work “dangerous” to women’s morals. In frontier towns, where prostitution was one of the only professions available to single women, this association was sometimes made law. When the city of El Paso passed a 1918 requirement that “undesirable women” (mainly the city’s prostitutes) receive mandatory STD testing, restaurant waitstaff were also required to participate.

There was one major problem: Women were beginning to enter public recreational life. From the dance halls of New York to small town red light districts, young women were drinking and dancing for their own pleasure. New forms of recreation brought new sexual possibilities, including the rise of “treating.” An informal barter system wherein young women, lacking the funds to pay for recreation on their own, exchanged sex acts and “dates” for petty cash and gifts, treating was, argues Elizabeth Ann Clement in her history of sexual culture in early 1900s New York, a midway point between prostitution and modern dating (and a cultural antecedent to the lingering pressure many modern-day women experience to “put out” if a man has paid for a date).

It was in this context that, in 1917, Frances Donovan tied an apron around her waist, put aside her middle-class inhibitions, and stepped into her first Chicago lunch cafe. Labelling it “the sex game,” Donovan, who was impressed by her coworkers’ entrepreneurial spirit if somewhat scandalized, described a system that teetered between sexual harassment, prostitution, and treating. Women knew that smiling big got them better tips and that agreeing to dates with customers could result in dollars; Donovan herself took her wedding ring off to increase her day’s tips. Underlying it all, wrote Donovan, was the ubiquity of economic need. “Because of the economic inefficiency of the men in her world, the waitress fails to reveal her ideal of domesticity and so she takes on a life of semi-prostitution.”

But as Donovan worked undercover in local eateries, another force was reshaping the restaurant industry: Fred Harvey, who, from 1880 to 1930, built an empire of restaurants that followed the trains from Chicago to the Pacific. His army of “Harvey Girls” turned serving into a standardized, respectable occupation for thousands of young women. Required to be unmarried, educated at least until eighth grade, and white, Harvey Girls adhered to strict moral standards: They stayed in dormitories with curfews and matrons, and wore itchy, floor-length woolen uniforms. (The restaurants had originally been staffed by black men, who were often targets of racist violence; white-washing was often coded as a way of providing “better service.”) Through this system of comportment, says journalist Stephen Fried, who wrote a book on the Harvey empire, “It was very clear that the signal was to stay away from them and to have honorable intentions.”

Today, “service with a smile” is more often a reference to family-friendly chain restaurants than to booze-sticky saloons. But the association between culinary and sexual service has far from disappeared. Subsets of the industry—from Hooters’ waitresses to “bottle girls,” who bartend in strip clubs—still serve sexual titillation alongside food. And for millions of servers across the U.S. whose incomes depend on customer tipping, sexual harassment remains a reality.

In the past few years, restaurant workers with groups such as the Restaurant Opportunities Center have organized against sexual harassment, and even against tipping in its entirety. In this, too, the undercover-schoolteacher sociologist, Frances Donovan, proved prescient. Writing at a time when working-class women were still considered unfit for self-governance even by some suffragists, Donovan wrote admiringly of the power of women seizing control of their economic destinies. Surveying her waitress coworkers, she wrote, “Here we have the feminist movement and ideals embodied in a class.”

Inside the creative world of conveyor-belt restaurants.
restaurants

From blog to bistro, Prashanta Khanal’s focus is forgotten and overlooked foods.
restaurants

For more than a decade, Salmon n' Bannock has been serving indigenous cuisine and stories in Vancouver.
Video

One of the most acclaimed eateries in Arkansas is a two-table diner on the ground floor of a family home.
Want to see fewer ads? Become a Member.
From Around the Web
THE GASTRO OBSCURA BOOK
Taste the World!
An eye-opening journey through the history, culture, and places of the culinary world. Order Now