Between the Folds of This Silk Fan Is a 19th-Century Horse Racing Program - Atlas Obscura
Want to see fewer ads? Become a Member. 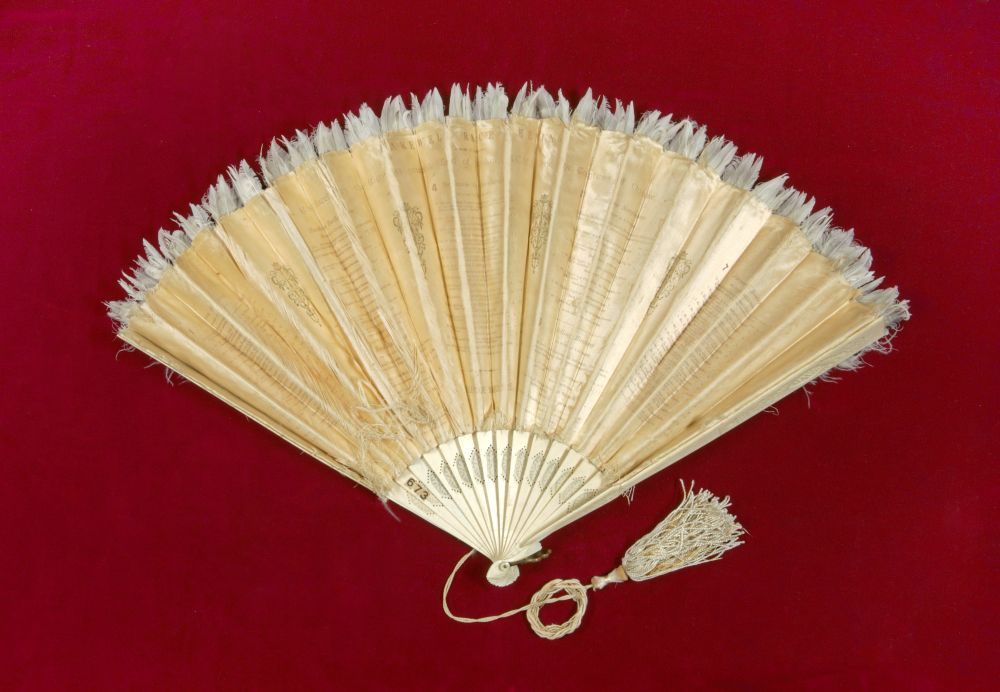 Concealed in the creases of this fan are the details of the race on February 20, 1892 at Ellerslie. Courtesy Auckland City Libraries

It was February 20, 1892, in the middle of New Zealand’s hottest months. In the stands overlooking Ellerslie Racecourse in Auckland, an earl and a countess watching the races cooled themselves with a fan made of fine silk, feathers, and ivory. But this was no ordinary fan. If you looked closely between the creased silk, you could make out the names, ages, and weights of the horses as well as the program for the day’s races.

The special racing event was held in celebration of the earl, William Hillier Onslow, the governor of New Zealand, who was about to return to his parliamentary career in England. For special Auckland Cup races and events, programs were fashioned out of the finest material, but it was rare to find one crafted into the form of a fan.

The ornate fan program was given to the Onslows as a farewell token. It was completely decked with valuable materials and references to the honoree. The trim of the 12-inch-tall fan is adorned with feathers, while the ribs are made of ivory that are etched with intricate patterns. The silk is printed with typical information of a race book that you’d get today, says Andrew Henry, a librarian and heritage resource developer at Auckland City Libraries, which holds the limited-edition silk race program fan in the Auckland Libraries Ephemera Collection.

The horse’s name, age and weight, the rider and his colors, the time each race starts, the distance and winning stake are all there. The February 20, 1892 issue of the New Zealand Herald also noted that the cover of the books featured the monogram of the club and the Onslow coat of arms and motto “Festina lente,” which is Latin for “Make haste slowly.”

Silk programs weren’t uncommon in the Ellerslie Racecourse stands. “It would seem that for special events with visiting dignitaries it was quite common to print on silk,” says Henry. The Auckland Libraries Ephemera Collection also has an assortment of playbills printed on silk from the mid to late-19th century. But this is the only race program fan ever found.

But Henry has yet to come across another silk racebook that’s been converted into an alternative item. “February 20 is around when we get the hottest weather here in New Zealand so it could be very hot wearing Victorian-style clothes to the races,” he says. The fan potentially could have been used for “practical purposes.”

Even though the object was a lavish gift, the actual race was not a success at all, says Henry. The newspapers lamented the poor weather and turnout, as well as the small amount of money that had been wagered. But despite the disappointments of the race day, at least we ended up with this one-of-a-kind fan.

Object of Intrigue is a weekly column in which we investigate the story behind a curious item. Is there an object you want to see covered? Email ella@atlasobscura.com.

No one knows what it says.
objects of intrigue

But did they create the famous one with a starring role in Citizen Kane?
Video