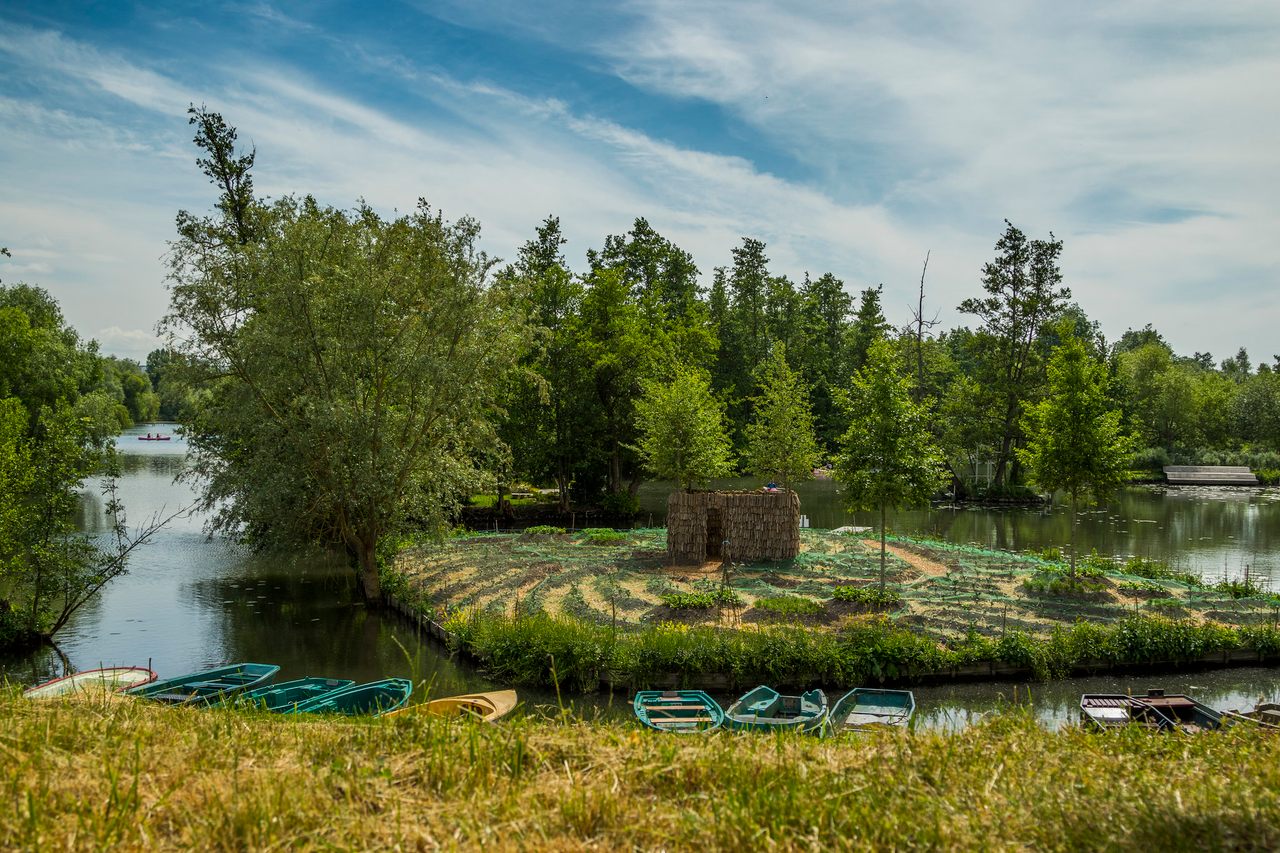 Les Hortillonnages have been cultivated since the Middle Ages. Jérôme Pellé/CC BY 2.0
In This Story
Destination Guide

In and around Amiens in the French Picardy region, a stretch of floating farmland poses an unusual challenge to local farmers and gardeners. Les Hortillonnages d’Amiens are an age-old, 300-hectare area of marshland where vegetables and flowers grow on gardens connected by 40 miles of canal.

One legend claims that the Hortillonnages date back to Roman times, with the term for market gardens, hortillon, originating from the Latin word hortus. But it was in the Middle Ages that locals mined marshland around the loops of the Somme river for peat to burn as fuel. The network of trenches eventually filled with water, creating a labyrinth of highly fertile land and canals, soon utilized by farmers who sold their fresh produce to the bustling market halls of nearby Paris. Hortillons varied in size, and just as with fields, some farmers had larger plots while others cultivated only one. But throughout the years, the work has always been a family affair.

Without roads, the only way to navigate the vast area is by the flat-bottomed boats used by farmers for centuries. Today, many of the boats take visitors on tours to spot wildlife and the many birds that call this unusual habitat home. The fertile gardens burst with cabbage in all its forms, carrots, leeks, turnips, and radishes, as well as seasonal vegetables such as eggplants, peppers, tomatoes, and melons. The entire area is an oasis of calm, with water lilies floating on the canals, shimmering kingfishers diving for fish, swans gliding past, and dragonflies hovering.

Sadly, the old ways of the Hortillonnages are dwindling. Farming is a work-intensive career at the best of times, but having to farm in swampland, where your vegetable patches flood every time it rains more than usual and where temperatures near freezing can wreak havoc on delicate crops have turned many people away from the age-old practice. Not to mention, working by boat is a challenge that only a few people are willing to take on.

One of those people is Thérèse Nowak. Not only does she work with her husband René in the Hortillonnages, but she also runs a small museum showcasing the region’s history. It’s a hard job, she stresses. “You don’t count your hours, you work even in the rain and in the cold,” she says. “But it’s such satisfaction to work this rich and black soil, to see such beautiful vegetables grow, to feed families with fresh, healthy and tasty products, to meet customers in the markets.”

At the end of the 18th century, there were about 50 hortillons. However, with the development of intensive agriculture and increased imports during the 20th century, many hortillons ceased cultivation, and most of the market gardens have been transformed into pleasure gardens for the people of Amiens who live in town. Today, there are only around 10 hortillons left, most belonging to just one family.

These remaining farmers are struggling to keep the tradition alive in modern times. Some, such as Perrine Parmentier, use Facebook to coordinate vegetable deliveries. Others still bring their produce every Saturday morning to the city’s pretty Saint-Leu quarter, to sell at a floating market. Once a year in June (cancelled in 2020 due to COVID-19), the farmers dress up in traditional costume and hold an extended floating market, as a reminder of the old ways.

Nowak (who is also Perrine Parmentier’s aunt) stresses the significance of this unique way of life. “It’s a profession to which I am very attached,” she says. ”It is the job of my parents, of my great-grandparents.”

But it is not just history and tradition that keeps her going. To her, being a farmer of the Hortillonnages symbolizes all that is wonderful about life in Amiens. “At the gates of the city, we work in sublime nature. Between land and water, we move in a boat,” she says. “It’s magic!”

Nowadays, tourism is helping keep this unique region afloat. Aurélie Wallet, from Somme Tourism, explains that opening up the Hortillonnages to tourists played a large part in saving them from being drained and paved over as access roads. It could have been the end of an era, if locals had not leapt into action. “We feared the disappearance of Hortillonnages in the 1970s because of the construction of the bypass and the motorway,” she says. “But the Amiénois mobilized to save their heritage.” Now, sightseeing tours float along the canals, with curious visitors packed into the traditional cornet boats.

What may best sum up the unbreakable tie between Amiens and its farmers is the story of their cathedral. The country’s largest, dwarfing Notre-Dame in size, it dates to the early 13th century. A farmer donated a drained plot of the Hortillonnages for its construction. Reportedly, the plot had been an artichoke garden, and the artichoke farmer’s good deed was honored by including a statue of him on the face of the cathedral, tying the two wonders of Amiens together for all time.

But can it be grown anywhere else?
islands

Giardini Panteschi are found only on the windswept island of Pantelleria.
Video • PinDrop