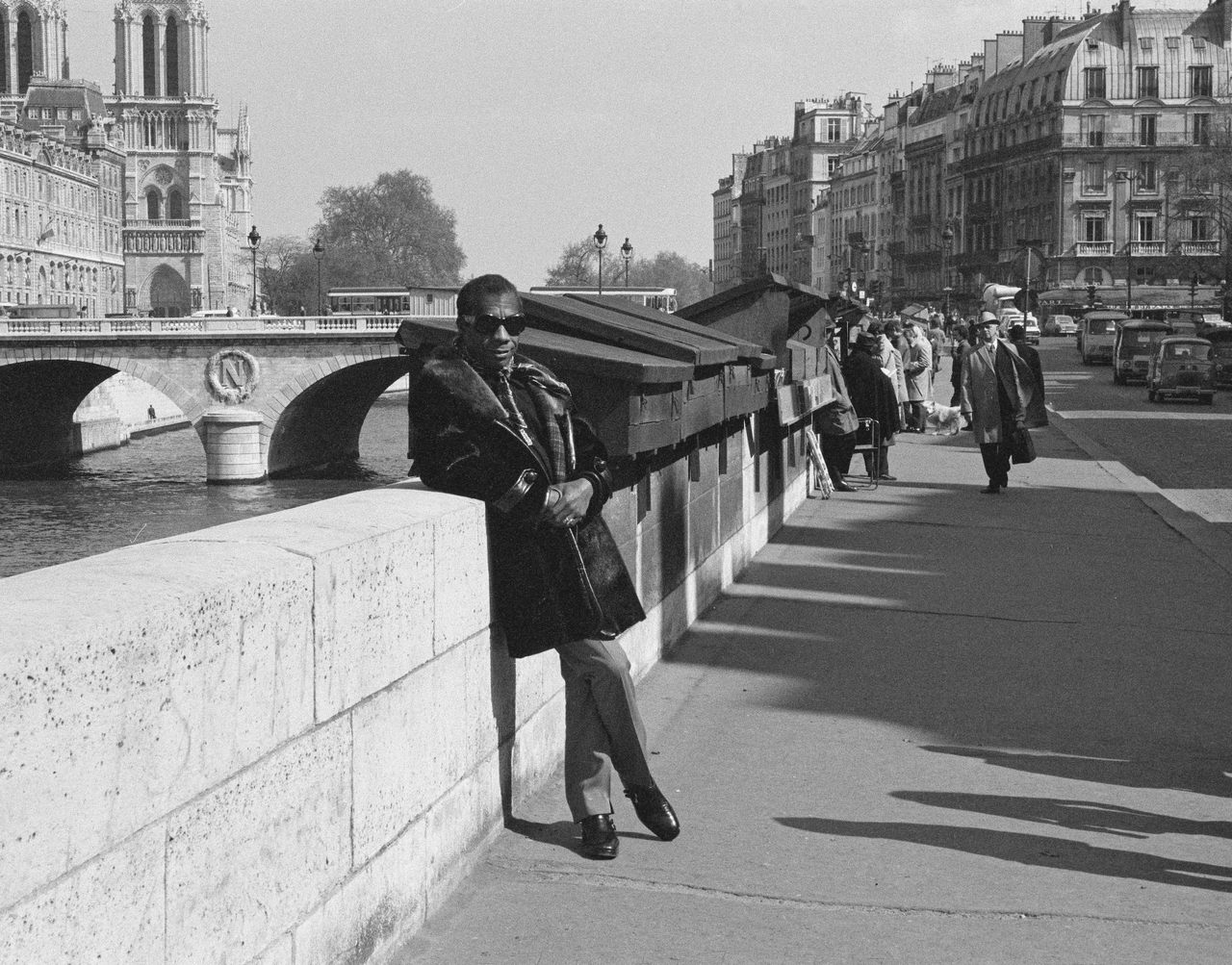 James Baldwin worked on his first novel in Paris, and he ultimately spent decades living in France. Sophie Bassouls / Sygma via Getty Images
In This Story
Place

The formerly unmarked grave of the noted Black American painter, who was a friend to James Baldwin.
Destination Guide

Monique Wells moved from Texas to Paris in 1992 for a job, and she ended up staying indefinitely. Like generations of Americans before her, Wells and her husband fell in love with the City of Light. But since she went there as a veterinary pathologist, and not as a tourist, it was years before she asked herself where she’d go if she only had a few days in Paris.

Then Wells and her husband, Tom, started a company that created custom travel itineraries. Travelers would fill out questionnaires about their travel interests, and the couple would create one-of-a-kind Parisian trips based on personal interests. The process got Wells thinking, finally, about her own interests. She realized that she’d want to visit the traces of fabled African-American expatriates who came to Paris to pursue a freer life.

Black Americans had long traveled to Paris for opportunities that America denied them, especially during the 20th century. “I got to Paris with forty dollars in my pocket, but I had to get out of New York,” the writer James Baldwin said about why he left the United States. “I didn’t know what was going to happen to me in France but I knew what was going to happen to me in New York.” Paris is the place where Baldwin and Richard Wright once feuded over Wright’s 1940 novel, Native Son. It’s also the place where Josephine Baker danced and ate lunch with her pet cheetah, Chiquita. The artists Loïs Mailou Jones and Beauford Delaney both painted here.

Wells set out to trace these journeys and more through a new company called Entrée to Black Paris, a hub for 13 distinct walking tours, Creole cooking classes, and tours of major museums highlighting images of Black people in Western art. Wells spoke with Atlas Obscura about the origins of the project and the hidden histories of Paris that she’s uncovered.

Why has there been such a strong African-American presence in Paris, as opposed to elsewhere in Europe?

It’s tied up in the history of the United States’s involvement in World War I. A large number of African-American troops served in France and were not allowed to fight with white Americans. They were “given” to the French and fought valiantly next to French people. They were awarded medals for their bravery, they were invited into French homes. This was an experience that they could have never hoped for on U.S. soil.

When the war was over, they went back home and talked about that. The summer after that war ended is known as the Red Summer, because anti-Black riots erupted in two dozen cities and racist violence killed or injured hundreds of people. White America felt that it needed to put these Black men back into their place.

France took on this sort of mythical quality. It was seen as a place where Black people could just be people. And that’s where the myth of the colorblind France really took hold.

How did you decide to develop these tours?

Years later, my husband decided to launch Discover Paris! to help travelers see their own interests reflected in Paris, with completely self-guided itineraries. Because I am an African-American woman, I said, ‘Well, I know that our African-American clients will want to see this side of Paris.’ I started doing my own research, and that’s how it began.

How do you research and identify the sites that you include on your tours?

There are core reference books that I started with. There are a lot of topics that people have not extensively researched, or that include pieces of misinformation that have been passed on and passed on. I look for reliable references in newspaper articles, blog posts, and things like that. I also learn things just from walking around.

We started out with four core tours. There’s one on Black Paris after World War II. Another explores Montparnasse through African-American artists. The third focuses on the interwar years, between World War I and World War II, in Montmartre, and it was largely about performers, night-club owners, and jazz, which was introduced to France just before and during World War II. The fourth walk was on and around the Champs-Élysées, the premier avenue in Paris.

Then we began to look at individuals, for example the entertainer and activist Josephine Baker. Her life is incredibly rich, and you could spend five lifetimes studying Josephine and not be finished. We do three different walks focused on her. We do individual walks on the writers Richard Wright, James Baldwin, and Langston Hughes. We do a walk on the artist Beauford Delaney, who is my particular passion.

We also have a walk in what some people call Little Africa, which focuses on the Black African and North African presence in Paris. Two walks focus on women primarily, including the walk we do in the Luxembourg Gardens. And we’re going to introduce a second version of the Montmartre walk that focuses on Black women. The focus is still the nightclubs and the jazz fervor between the First and Second World Wars, but women in general get the short end of the stick when it comes to history, so it’s focusing on the African-American women who were part and parcel of that time period.

What are some sites that have been meaningful to you?

The Luxembourg Gardens is an iconic part of the Paris landscape, and it happened to be my favorite place in Paris for years—before I had any inkling of the history there. I daresay that no one would ever conceive that there was so much African-American and Afro-French history wrapped up in the Luxembourg Gardens.

Are many of the places you include on your tours identified with markers?

Virtually none. I’ve lived here 28 years now, and over the years there have been more markers put into place. But our history here is still largely hidden. This is one of the things I discuss during a course I created, the only continuing education training course for travel professionals that focuses on the African diaspora in Paris.

Have you personally made efforts to memorialize meaningful places?

You were also instrumental in installing the tombstone for Beauford Delaney. Could you share a bit about that?

It was a life-changing experience. When I set out to find his grave, it was only with the intent to talk about Beauford in relation to James Baldwin. I went to this cemetery not understanding that the grave was unmarked. In France gravesites are “leased,” and if they are not paid for, your remains can be removed. I was trying to find out on behalf of Beauford’s friends whether he was still in the ground. The authorities were reticent to tell me anything because I wasn’t a family member. It turned out that he was going to be exhumed that year, but they wouldn’t say when.

I went there and found him in a pauper’s division of an enormous cemetery. It looked half-empty and was in deplorable condition. The weeds were literally up to my knees, and I couldn’t make heads or tails of how I was supposed to find the grave. Guards walked by and I stopped them and said, ‘Please help me, I have the coordinates of his grave.’ Each individually walked off and came to the same place, which had a little ceramic flower arrangement nestled among the weeds. They said, ‘This is it.’

I was mortified that this man would be buried in such impoverished and desolate conditions. I sent pictures to the friends. They asked, ‘Is it possible for us to pay the money to keep him from being exhumed?’ I became their advocate in Paris. They’re telling me all these stories about why Beauford means so much to them, so now I’m starting to become personally involved in this story.

Very long story short, the deputy director of the cemetery became involved, because the story touched her. She said, ‘You can petition the cemetery system to allow you to pay to keep his grave intact.’ I wrote and explained that Beauford was an artist and that the French government owns his work. When you talk to French people about a writer or an artist, that gets their attention.

They agreed to make an exception. Less than 300 Euros needed to be paid. The friends sent that money and I paid it. They were so excited that they wanted to place a stone, and asked me to find out what that would require. By now, I’m all in, and I take it upon myself to investigate the cost of a tombstone. It was going to cost several thousand. That’s when I started the French nonprofit, Les Amis de Beauford Delaney, to raise money to fund and to place the stone.

I still get goosebumps when I think about it. Suffice it to say that Beauford Delaney, his spirit and his whole story, got into me and would not let me go. I’m still writing about him, I got the two plaques installed, and still felt like it wasn’t enough to honor this man. So I founded a US-based nonprofit in 2015, to raise money to do an art exhibition of his work.

What kind of a long-term impact do you hope your tours, and your efforts focused on Delaney, will have?

My desire, my passion, and my hopeful impact is to expose people and make people curious about the fact that African Americans were able to—over the course of a couple of centuries—come to this place, make a life for themselves, and irrevocably and noticeably influence French culture.

The preservation of a heritage trail, where the author and anthropologist spent the last years of her life, takes a whole community.
aquariums

From Nodding Night Court to Dove Sail Lane, the town’s address choices are both practical and poetic.
television

The characters in the acclaimed horror drama fight both monsters and white supremacy.
Video