How I Found the 4 Hardest-to-Find Bookstores in the World - Atlas Obscura
Want to see fewer ads? Become a Member. 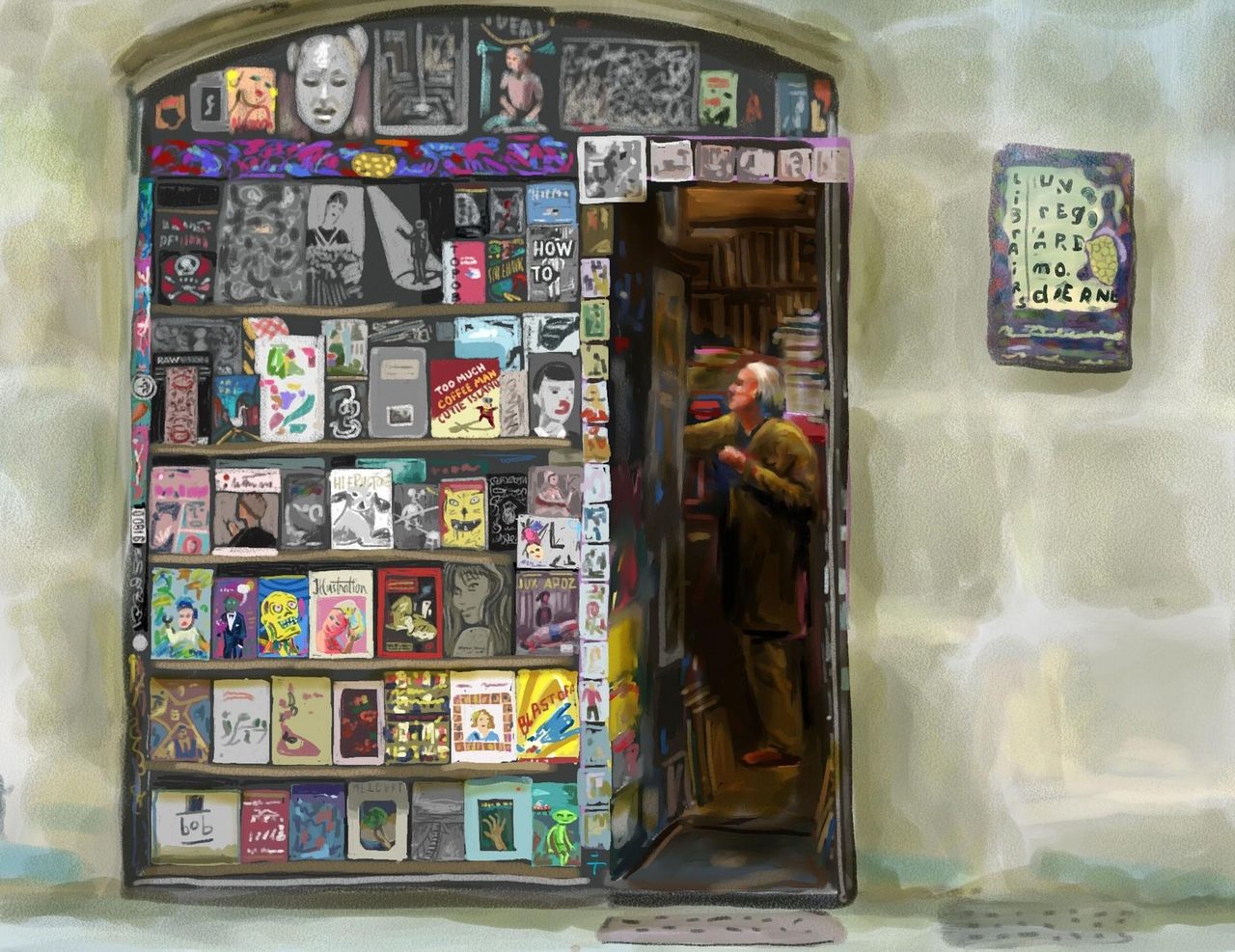 Un Regard Moderne in Paris. (All illustrations by Bob Eckstein)

For the past two years I have been looking for and illustrating the world’s greatest bookstores, for my latest book. My selections were based on their local contributions, their history and their beauty and uniqueness. I collected the stores’ best stories from the owners, employees, customers and some of today’s great artists and thinkers.

The list started with 150 bookshops comprised of recommendations, research and personal experience and was ultimately trimmed in half. While finding the top 75 was a difficult, yet interesting, task, the following four bookstores were—quite literally—the hardest to find.

“It’s extremely easy to walk past it. Even now, knowing exactly where to find it, I don’t ‘see’ it unless I’m really, really looking for it. It’s almost like it appears magically in the wall,” Jenny Hart, an artist, designer, and author, said of Paris’ Un Regard Moderne. “The last time I stepped in was 2007 and there was only room for one person in the passages. My work had gained a lot of attention by that time and Juxtapoz had done a nice feature on me and there was a copy of the magazine right on one of the stacks. For me, this was something I never could have imagined! It was like a personal dream come true to be inside this bookstore in that way. It’s like a holy site and you feel anointed.”

Un Regard Moderne houses thousands of volumes–mostly art and pop culture–and it’s affectionately considered by many to be the greatest bookstore on earth. Customers have ranged from William S. Burroughs to Sonic Youth.

I asked my cousin, Allen Stone, to speak with the notorious owner because he’s a writer and could speak French. “It was the strangest place I’ve ever been in. The front of the shop is non-descript. All you see in the window are stacks of books to the ceiling. You don’t see it until there it is. The joint is packed, not much room to move around in and unless you’ve been there before, you’d never know where or how to look for things. When I spoke to the famous owner, Jacques Noel, and started to explain about your book, he immediately went ice cold and said ‘Je n’existe plus’ (‘I’m no longer here’). Why he no longer existed, I do not know,”’ Stone said.

Word on the Water

It took awhile to find this bookstore, as I was given the very general address of Regent’s Canal which snakes along quite a ways. It’s not even seen when you are in the vicinity as the canal is below street-level and accessed by descending stairs. Once strolling along the canal, one looks for the modest signage for Word on the Water, London’s only floating secondhand bookshop, among all the beautiful boats.

The 100 year-old Dutch book barge hosts poetry slams, book readings, and live music events on the roof stage on top of the boat. Stephen Fry and Russell Brand, among many others, are some of the many who have been on board.

The ship’s Captain, Jon Privett, explained to me how Word on the Water was elusive to him as well: “Back in 2002, I was evicted from my squat in Hackney, which was auctioned and the buyer had to pay us to leave. I used my share on a boat; I was homeless if I didn’t. It was an old 1950s Norfolk Broads cruiser, half-sunk, which took a lot of looking after and then literally fell apart one night. It actually split in two. So I bought an ex-police boat (by borrowing some money off my mum) that I kept for seven years, during which time I acquired this one. I planned the Word on the Water business with my friend Paddy: seeing this boat for sale, but not able to afford it, we asked the seller if we could rent it, showed him our business plan, and then he turned around and said he’d sell us the boat for a share. So we own a third each. We started out moving every couple of weeks, but it’s impractical to do it with a boat which is a hundred years old…The Canal & River Trust keep writing to ask us to leave, and we keep ignoring them. We’ve even given them a petition of 5000 names – and yet they still don’t acknowledge us. It’s shockingly expensive to live on a boat in London but still a fraction of what it costs to live in a house.”

In Nanjing, China there’s a road which goes down a hill and disappears into the ground, all very James Bond-like, leading to a former bomb-shelter that was later an enormous underground parking garage, before it became Librairie Avant-Grade, the world’s largest hidden bookshop. And one of the most beautiful. Many consider it the most beautiful bookstore in China. Inside the tunnel is a double yellow-striped road lined with books, while above you is a huge black Christian cross.

The owner, Qian Xiaocha, first owned a bookstore across from St. Paul’s Cathedral in London, converting to Christianity after he kept hearing the hymns.

“Reading,” Qian said, “is our religion and this place is the heaven for book lovers.” After the cross you’re met by a replica of Rodin’s “The Thinker,” which then leads to the main store filled with 300 chairs to read in, a coffee shop, event space and literally miles of books.

A mining town in the middle of Australia known as the “opal capital of the world,” Coober Pedy is one of the strangest towns in the world. With it’s impossibly high temperatures, this town is completely underground because residents can’t live on the surface.

“We sell a lot of books on Indigenous culture and history and the early central Australian explorers,” the owner says.

Inside, the store is extremely comfortable and the books more or less perfectly preserved, as the air below the ground is cool—without all the humidity.

The Monks Who Spent Years Turning Themselves into Mummies—While Alive

Book Towns Are Made for Book Lovers

Around the world, tiny towns have made bookstores their speciality.
bookstores