What Does It Mean That Greenland Sharks Could Live for Hundreds of Years? - Atlas Obscura
Want to see fewer ads? Become a Member. 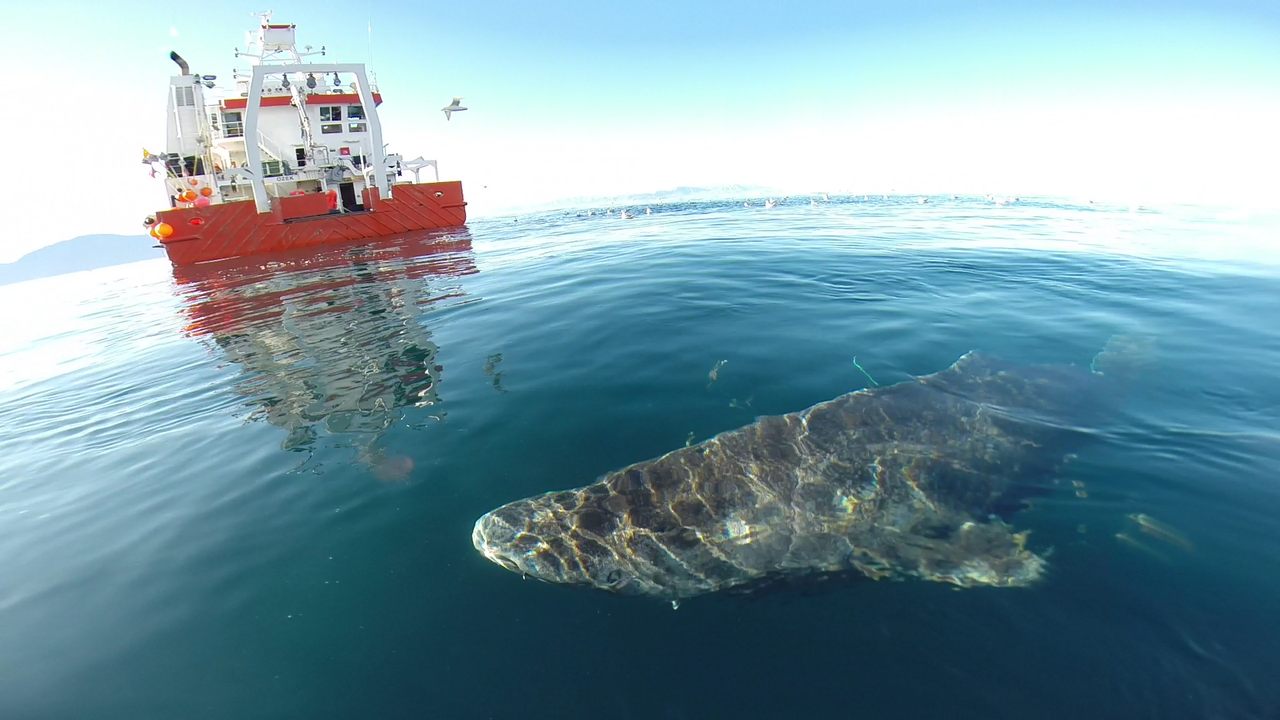 Greenland sharks often end up as bycatch on fishing vessels, and can be considered a nuisance. Photo: Julius Nielsen
In This Story
Destination Guide

About 15 years ago, during a fishing expedition off the west coast of Greenland, Danish marine biologist John Steffensen spotted a local hunter in a small boat. A large, voluminous dull-gray shark hung from the boat’s edge. “I kind of went,‘Wow, I’ve never seen a Greenland shark before,’” says Steffensen, who then told the captain of his own ship that he’d love to catch one someday. “And the captain on our boat, he was laughing at me.”

Why, the captain must have been wondering, would anyone want to catch a Greenland shark? First off, he said, one should never, ever, eat their meat; not only is it foul-tasting, but it can be toxic. (Though it can be fermented to make Iceland’s notorious hákarl, a dish that is safe to eat but definitely not for the faint of heart, it is said.) And if you feed it to sled dogs they could get “shark drunk”—a state of wild, uncontrolled frenzy. The captain also casually remarked that Greenland sharks are supposed to live an extremely long time.

It was this final statement that really piqued Steffensen’s curiosity. Upon returning to Denmark, where he is a professor at the University of Copenhagen, he pored through the scientific literature. He came across a study tracking size of the sharks over decades, and size and age are tightly correlated in fish. The study showed that one of the sharks grew something like three inches in 16 years. “If the sharks grew half a centimeter per year and they can grow up to five meters [15 feet] or more, it doesn’t take a lot of math to calculate that they probably are very old.” At the time, he estimated they could be up to 200 years old.

That was the first step in what has turned into some remarkable scientific detective work that resulted in a study that posited that Greenland sharks could be the longest-living vertebrate species in the world, surpassing the bowhead whale, koi fish, and Galapagos tortoise. It also sparked a constellation of research around our current understanding of longevity, as well as about the ongoing survival of this enigmatic—and downright weird—species.

At first glance, Greenland sharks are strange, but perhaps unremarkable. They’re sluggish, awkwardly proportioned, and often have long, pinkish parasites dangling from their eyes. They engage in cannibalistic behavior and dive more than a mile deep and can roam from the icy North Atlantic Ocean to the balmy Gulf of Mexico.

In the first half of the 20th century, Greenland sharks were commercially hunted for their oil-rich livers, to the tune of hundreds of thousands of animals a year. Today, fishermen from their namesake land find them a nuisance, since they feed on valuable halibut and can get tangled up in nets. If they don’t find a way out, they can end up damaging equipment on deck and need to be killed. “[They] absolutely hate these sharks,” says Steffensen. For decades, towns across the large island have provided bounties for Greenland sharks hearts, in part to help offset the cost of the damage they can cause. In 1984 alone, around 5,000 were collected, for about $50 each. Today they only fetch a fifth of this price, but the hostility is not discounted.

This was why Steffensen’s fishing captain was so baffled, but that didn’t dull Steffensen’s interest, especially in the rumors of extreme longevity. But how could find out for sure? He tried scanning a vertebra at the local hospital for signs of growth rings without success. He then consulted Jan Heinemeier, a retired physicist from Denmark’s Aarhus University and a renowned expert on radiocarbon dating. Heinemeier explained to him that dating shark vertebrae would only show how long ago a shark had died, not when it was born. But Heinemeier had another idea. What about eye lenses?

Unlike most tissues, which grow new cells, eye lenses are produced at birth and remain exceptionally stable, so crystalline proteins in the lens could be subjected to carbon dating. In fact, Heinemeier had used that exact approach in the investigation of a child murder case in Germany in 2008.

Julius Nielsen, then a doctoral student and now a scientist with the Greenland Institute of Natural Resources, helped lead the study and gained access to the remains of 28 female Greenland sharks caught by local fishermen, between three and 15 feet in length. Following Heinemeier’s technique, they extracted the eyes, peeled their outer layers, and scraped the lenses. “Their eyeballs are about the size of oranges,” says Steffensen, adding that at that moment he had some in his own freezer. “And your eye lens is built up nearly like an onion: it’s layered on the outside, but in the middle you have the nucleus, and the nucleus has the original carbon.”

The results were astounding, indicating that Greenland sharks could live anywhere between 272 and 512 years. There could be Greenland sharks alive today, the results suggest, that were born during the Renaissance. “I think our first response was: ‘What did we do wrong?’ No, I mean, seriously, you come up with this number, and you think, ‘Holy crap, we’ve done something wrong,’” says Peter Bushnell, a biologist at Indiana University South Bend who worked closely with Steffensen and led the analysis.

Among the subtleties they observed was that larger, older sharks grow at an exponentially slower rate than young ones. So among the largest sharks, a difference of just four inches could represent several decades of life. The largest shark in the study was more than 16 feet long. Steffensen knew from personal experience that Greenland sharks could reach 18 feet. That couple of feet could represent a couple more centuries. To be fair, Bushnell and Steffensen are sure to say, this kind of extrapolation comes with a high degree of uncertainty.

But if these sharks do indeed live for centuries, it “raises all kinds of different questions about cells and cardiovascular function and heart tissue and blood vessels, and, you know, everything,” Bushnell says. “How does something live that long?”

After Steffensen and his colleagues published their findings in Science in 2016, this spooky, cadaverous shark became something of a sensation. Scientists around the world have been racing to unlock the secret of this longevity. Holly Shiels, a senior lecturer in animal physiology at the University of Manchester, has focused on their hearts, which are about the size of a small watermelon. She explains that Greenland sharks may have a uniquely sophisticated system to repair damaged DNA.

“The [cell] nucleus from what is a potentially 200-year-old [Greenland shark] looks like what we would think of as a teenager in mammalian terms,” she says. “What we think could be happening is that these are just continually renewing hearts.”

Another scientist, David Costantini, a conservation ecologist affiliated with the Museum of Natural History in Paris, France, has focused on oxidative stress in Greenland shark blood and muscle. Kim Praebel, of the Arctic University of Norway, is looking for immune-related genes. “I mean, if you are able to live for three or four hundred years or whatever, you would also need to avoid getting sick,” he says. “I just think it’s logical.”

Bushnell finds this work interesting but inherently misleading. Genetics certainly play a role, he says, but the most important factors are lifestyle and environment. Greenland sharks are large, deep-sea creatures that evolved to live in icy-cold temperatures, all of which dials down their metabolism. Their languid movements and ascetic ability to live off a single seal for nearly a year shows that they are highly energy efficient. And, importantly, Greenland sharks have no predators—except, occasionally, one another. “To live so long, we would have to live like a Greenland shark, and that just doesn’t make sense,” he says.

But there is a dark side to longevity: a prolonged period of sexual maturation. Animals that live slowly reproduce slowly. It may take around 150 years for them to become sexually mature, so all the bycatch in the fishing industry means that a lot of sharks are dying before they give birth.

A recent study led by Nielsen estimated that Greenland sharks may produce more than 200 pups per pregnancy, up to 20 times more than previously thought. So while they may offset the difficulty of delayed sexual maturity by having hundreds of pups at a time, it also suggests that survival of the species may rest on a limited population of centuries-old, exceptionally fertile females, says Nielsen. If they go, the entire species could at risk.

“The loss of a sexually mature Greenland shark is particularly disturbing,” he says.

According to Brendal Townsend, a shark researcher at Dalhousie University in Nova Scotia, even though regular bycatch gives the impression that Greenland sharks are abundant, they could still be on the brink of collapse. It wouldn’t be the first time. The same thing happened to Atlantic northwest cod in the 1990s.

When Steffensen first began studying Greenland sharks, longevity was his only question. But as he dug deeper, those questions seem to have multiplied, spawning paradoxes along the way. They’re predatory sharks, but they’re languorous and slow-moving. They’re commercially useless, but they could hold some secret to longer life. They’re everywhere fishermen look. And yet they may be on the cusp of disappearing.

Some years after that encounter on the fishing boat, Steffensen returned to report back to the captain who first stoked his interest in Greenland sharks.

“Oh, did I ever tell you that?” the captain replied. “I’d forgotten. But we just know that.”

Invasive predators and other threats have pushed the Key Largo woodrat to the brink. A small but passionate group of scientists and volunteers is pushing back.
islands

Scientists have pieced together a detailed biography—including a search for love and a violent end.
science

Scientists observing a pod in the wild think the animals may choose specific species for a skin care wellness routine.
Video • Object of Intrigue