How to Make a Wild, Wondrous, and Complicated Contraption With All the Stuff in Your House - Atlas Obscura
Want to see fewer ads? Become a Member. 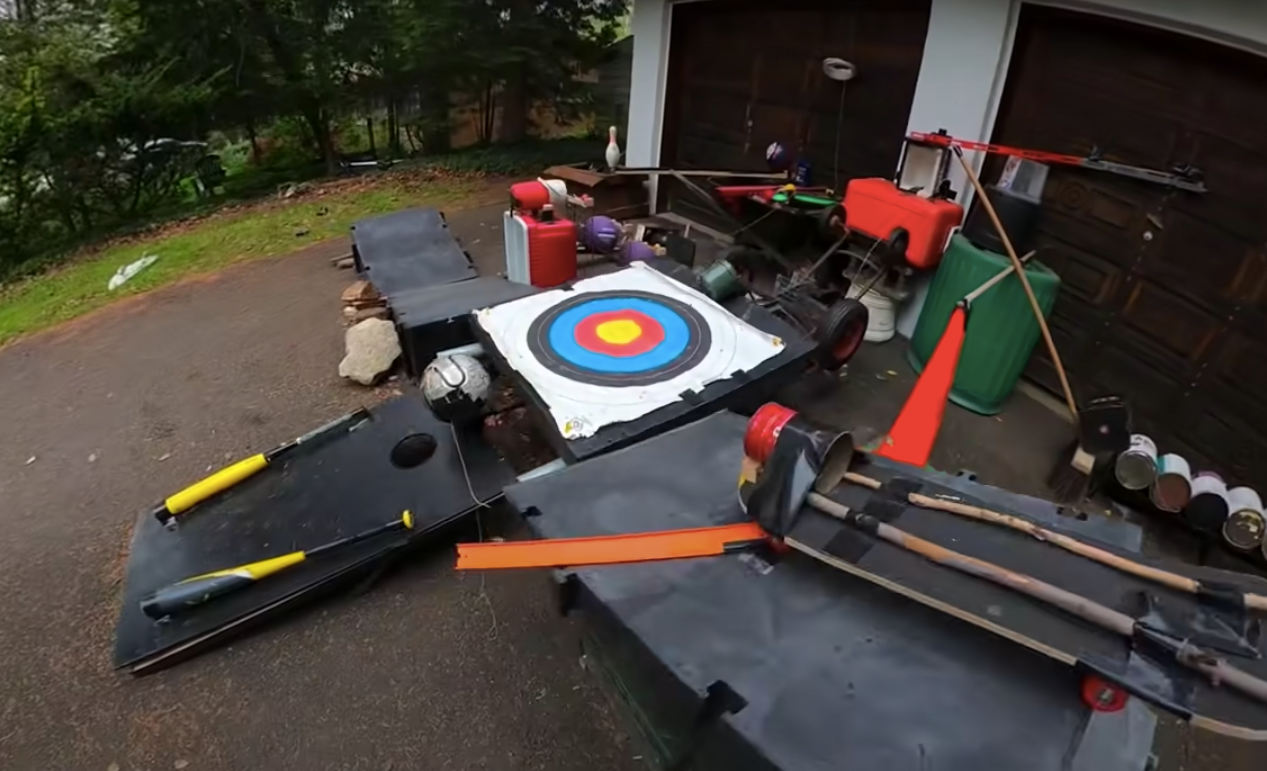 If you want to move a ball from one place to another, you have several options. You could roll it. You could bounce it. Or you could lob the thing. Any of these tactics would move the object along. But none would be nearly as fun—or as delightfully, needlessly complicated—as nudging it through a Rube Goldberg machine.

These homemade gizmos, named for the 20th-century cartoonist and inveterate tinkerer, are thrillingly convoluted chain reactions. They’re spectacularly inefficient and superlatively mesmerizing; that’s the whole point. They’re also a great way to grease your mental gears if you’re spending a lot of time at home.

Cree Ossner knows all about it. A 16-year-old high-school student from Middletown, New Jersey, Ossner has been making these contraptions for years. His latest—a sprawling outdoor setup he calls “The Swish Machine”—begins with a basketball that sails through the hoop and lands on a lawn chair, propped up at an angle by a recycling bin. That shot kicks off a 70-step reaction that relies on a haul that might be heaped in your closet or garage right now—everything from coolers to skateboards, bits of toy wooden train tracks, a shovel, a tire, and much, much more.

Ossner spent a month constructing it, and then another month fidgeting while trying to film the entire chain in a single take.

Atlas Obscura recently spoke with him about creativity, problem solving, and what you need to know to make your own marvelously meandering machine, wherever you are.

How did you get started?

I grew up watching a lot of YouTube, and Rube Goldberg machines were some of my favorite kinds of videos. I loved the idea of using household items in funny and interesting ways, and I knew I wanted to try and create one of these contraptions myself.

I started making Rube Goldberg machines in late 2013, but the first one I posted to YouTube was in January 2014. It consisted of only a few steps, starting with a marble rolling down a track, then some ping-pong balls rolling on my desk, and a domino line made out of books for the grand finale. It took years of experience to get to the level of building I am at now. But making machines is still just as fun as it was the first day.

What kinds of objects are best?

The best materials to use are ones that you can find around your house. For example, an empty paper-towel roll cut in half can be a great track for a ball. Cups can roll along a table, and books can be used as dominoes.

Finding random objects to use in Rube Goldberg machines is half the fun, but there are some materials that I use in pretty much every machine I make [like] tape and string … String can make transitions between tricks a lot easier, and tape can prevent objects from moving around. Ping-pong balls, dominoes, and popsicle sticks are some more common items I use in machines. Also, any kind of blocks can be super helpful too, since they can turn any flat item into a ramp when you put a block underneath one end.

When you’re working on a new Rube Goldberg machine, how do you begin?

Before I start building any part of a new machine, I establish a building location and a general path that I want the machine to take. After that, I look for items around the house that I might want to use. I experiment with these objects, figuring out if they can roll, bounce, fall over, or even be used in combination with another object to create a trick.

Rube Goldberg machines can be built wherever there is a lot of space. Most people will just build on a table, but I like to mix it up and try building in different spots around my house and yard. I have fun including parts of my environment in my machine, whether that’s a kitchen sink or a pond in my backyard. I live with my parents and brothers. I could tell they were a little annoyed that I was using their stuff in the machine—my mom wanted to garden and my dad wanted to clean the pool—but overall they were supportive and really wanted me to succeed in getting the machine to work. I build my machines one step at a time, and in no particular order at all. I think of big tricks I want to include, and connect them with other tricks later on.

How do you know the thing will work the way you want it to?

I test each section individually before I try the machine all the way through. Even with excessive testing, I have never [gotten] a machine to work on its first try. In my most recent machine, I had the last couple of steps mess up multiple times, meaning I had to spend almost an hour setting the entire machine back up. Trying again and again is just a part of the Rube Goldberg machine process. But it is super important to fix the machine every time something goes wrong. If you don’t do that, the machine might get stuck in the same spot over and over again.

What else can go wrong?

“The Swish Machine” was without a doubt my most complicated video yet. It was cool to think of tricks with large-scale items (such as ladders, shovels, and swings). But rain and wind definitely made the whole process harder than anything I was used to. When it rained I brought some things inside, such as cardboard, and covered other sections up with a tarp.

What advice would you give to folks who want to try making one themselves?

Be original. Watching videos of other machines for inspiration can be helpful, but coming up with your own ideas is the best part about making these machines. Don’t lose motivation if your machine doesn’t work right away, because the best ones on the internet take hundreds of tries, including mine.

Most importantly, have fun. I’ve been making machine videos for six years now, and I still love picking up random objects and thinking about how I could use them in a machine. I hope anyone who reads this tries to make a Rube Goldberg machine at least once in their life. They’re a great way to pass the time, especially while social distancing, and overall I think it would be a great experience to have.

Celebrate the Heyday of Sweet American 'Salads' With These 7 Dishes

To Make Fracture-Resistant Concrete, Let a Sea Urchin Be Your Guide

The Wood screw pumps are mechanical marvels, but the turbines that power them are another story.
palaces

Remains sealed in the foundations suggest builders would do anything to protect the heart of a fledgling kingdom.
science

A remarkable ancient technology and tradition that united communities in the Andes is fading into history.
Want to see fewer ads? Become a Member.
From Around the Web
THE GASTRO OBSCURA BOOK
Taste the World!
An eye-opening journey through the history, culture, and places of the culinary world. Order Now