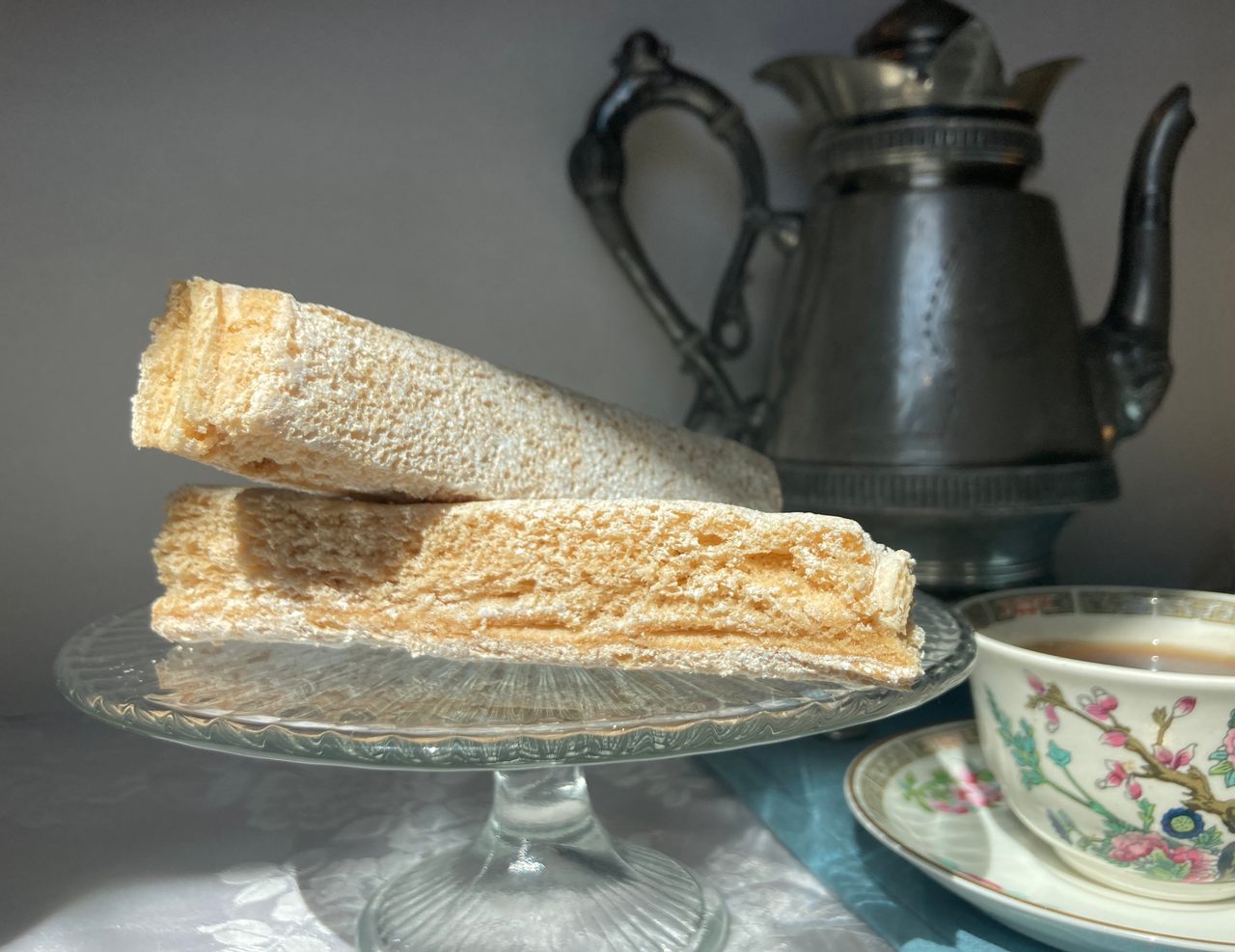 Pastila with tea is a Russian teatime staple. Anne Ewbank for Gastro Obscura
In This Story
Destination Guide

Dostoevsky loved it. Catherine the Great enjoyed it. Sofia Tolstaya, Tolstoy’s long-suffering wife and assistant, made it. It was once the quintessential Russian dessert: pastila.

Sweet, fluffy pastila was a classic afternoon tea snack at aristocratic Russian soirees of the 19th century. To make it, apple puree—essentially, applesauce—egg whites, and sugar are leavened with lots and lots of air that’s forced into the mixture with hard whisking. What happens next is improbable but stunning. The earthy apple gloop transforms into a gleaming white cloud, as light and soft as a goose-down comforter.

Next, this soft cream is gently spread into pans and baked at a low temperature for hours. What results is, for lack of a better description, a pale, caramel-colored marshmallow or meringue that’s exquisitely apple-flavored.

To Darra Goldstein, though, pastila stands apart from both meringue and marshmallow. “Some people have compared it to a marshmallow, but it’s not as chewy and it is not crisp like a meringue,” she explains. “But it has that quality of softness that you get inside some soft meringues.”

Goldstein, one of the foremost experts on Russian cuisine and the founder of Gastronomica magazine, knows what she’s talking about. And she’s been obsessed with pastila for decades. Her many cookbooks include pastila recipes. According to her, pastila is hundreds of years old, though she hesitates to name an exact era of origin. What she does know is that it started out as fruit leather, sweetened with honey and dried in an oven. The name, she says, comes from the Slavic postel, or bed, likely due to the mixture’s fluffy appearance in the wooden trays used to dry it.

Pastila’s popularity springs from the long-held Russian love of apples. My friend, Stanislav “Stas” Nikiforov, agrees. A tech CTO living in New York, he spent the first half of his life in Russia. Across the ocean, his passion for his national culture and cuisine has only grown. As for why apples are so present in his mother cuisine, he responds with a question in turn. “Why is cheese important to the French or potatoes to Peruvians?” he asks rhetorically. Russia, he points out, has historically had an enormous variety of apples, and familiarity in this case bred affection. “It’s a tree that can provide—like wood, shade, fruit—and grows really, really well,” especially in chilly Russia, he says. “And it’s pretty good-looking to boot.”

Before the Russian Revolution, the apple-growing towns south of Moscow vied to produce the most glorious varieties of pastila. The finest, it’s said, is made with the hardy, huge, cold-loving Antonovka apples. But the main feature of Antonovka apples is their acid. Sour and underripe apples, as it happens, have the most pectin, the substance that gives pastila its gummy texture.

Kolomna and Belyov are still the most famous pastila-producing cities, and, according to Goldstein’s cookbook Beyond the North Wind: Russia in Recipes and Lore, each claims to be responsible for one major pastila innovation. One legend has it that Kolomna was the first to whip pastila into airiness, sometime during the 14th century. A Belyov merchant in the 19th century, on the other hand, was the first to add egg whites, making the treat even fluffier.

In the days before electricity, making pastila was painful labor. Without a mechanical mixer, beating cooked apples into fluff had to be done by hand. One “particularly exquisite” 19th-century variety, says Goldstein, had to be beaten for an agonizing 48 straight hours. “So in Russia, you had serfs and they were in the kitchen and they were whipping the pastila,” notes Goldstein. “So it wasn’t any effort on the part of the people who would be enjoying it.”

Cue the Russian Revolution. Under the restrictions and scarcities of the Soviet Union, pastila slowly faded away. “It wasn’t part of the necessary food groups,” says Goldstein. “It was hard enough for them to get basic foods to market, which they didn’t succeed in doing either.” Many of Russia’s traditional, unusual, or unique foods met the same fate. But recently, there has been a massive upswing of interest in recovering ancestral Russian recipes. A decade ago, my friend Stas took notice that the interest in restoring Russian foodways became mainstream. To him, it was especially poignant. “We always grew up thinking that a lot of our culture had been just completely obliterated,” he says. “Then there’s this wave of people unearthing really old recipes such as Belyov pastila. And so everybody’s like, holy shit, this is what this thing is supposed to look like.”

Pastila has had a magnificent reintroduction in both Belyov and Kolomna. In 2008, Kolomna town council member Natalia Nikitina and her friend Elena Dimitrieva began producing the dessert again as a treat for the international crowd in town for the European Speed Skating Championships.

In the 19th-century writer Ivan Lazhechnikov’s novel The Ice House, Nikitina found a reference to Kolomna’s past prominence as a pastila producer. Together with Dmitirieva, she researched how to make the ancient apple treat in the Russian State Library, along the way finding references to all the luminaries—Catherine the Great, Dostoevsky, and the Tolstoys—who enjoyed and documented their love of pastila.

Simple, sweet pastila was once again a hit. In 2009, the women opened a museum and factory dedicated to the dessert. At the Museum of Forgotten Flavors, or Kolomenskaya Pastila, visitors are welcomed by costumed actors who explain the history of pastila, and a shop sells dozens of different varieties, from rosette-shaped zephyr to a hop-and-lemon-flavored pastila with supposed hangover-curing properties. Sadly, the partnership between Dmitirieva and Nikitina ended with acrimony and lawsuits in 2015. In a twist worthy of a Russian novel, Dmitirieva now runs another pastila museum down the street, by the name of Muzeynaya Fabrika Pastily.

Belyov has also resumed production of the treat, and these days, commercial pastila is easy to find online, even outside of Russia. But homemade or artisanal pastila is best. That info comes from Stas. “I know very few products where the difference between the traditional and what most people buy in a supermarket is so large,” he says. So listen to Stas, and unless you can plan a trip to Kolomna or Belyov, make pastila at home. There’s no need to beat it for hours: An electric mixer will do the job in minutes, and all it takes is a little patience to wait for the pastila to slowly dry in the oven. But that’s a small amount of time to wait in order to taste the dessert that Goldstein says is “the essential taste of Russia.”

This recipe takes a cue from Belyov-style pastila, which is stacked into layers, dried again, and then sliced. But Goldstein recommends simply taking two layers and sandwiching them together with jam.

The past, present, and future of Russia's signature alcohol is remembered in the world's only museum dedicated to the starchy spirit.
Genoa, Nevada