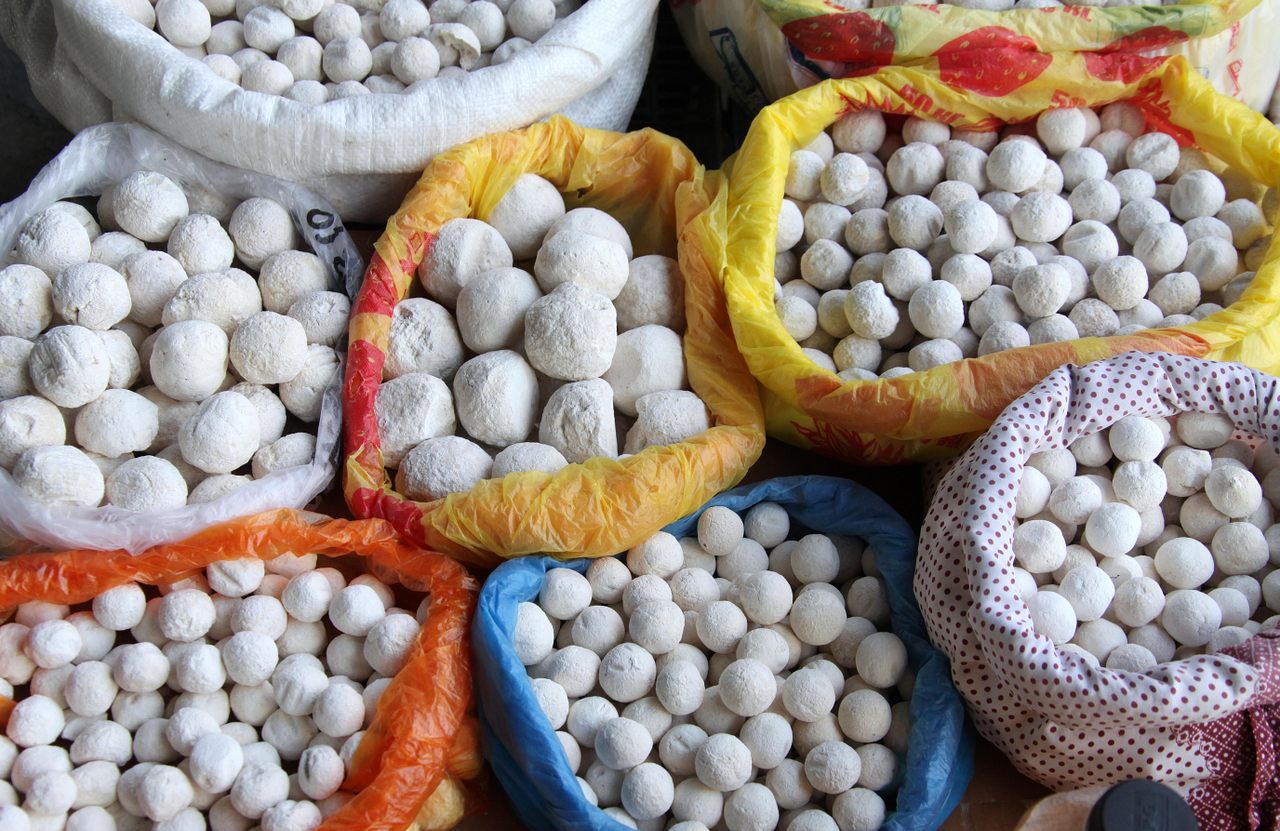 One winter morning, prisoners at the Akmola Labor Camp for Wives of Traitors to the Motherland, part of the Soviet gulag system from the 1930s to 1950s, trudged to a nearby lake. As they began gathering reeds to heat their frigid barracks, children and elders from the neighboring community approached the shore. The kids hurled small, hard white balls toward the women, and the camp guards cackled: Their charges weren’t hated only in Moscow, but here in remote Kazakhstan as well, recalled Gertrude Platais, who had been arrested in 1938 and sent to serve her sentence there.

While it initially seemed like an insult, the villagers had the opposite intent. One of the prisoners tripped on the projectiles, got a whiff of milk, and suspected they were edible. Back in the barracks, Kazakh prisoners explained that it was qurt, a traditional dried dairy product that had sustained nomads across Central Asia for centuries. Long-lasting, easy to carry, and packed with protein and calcium, the balls—described as “precious stones” in a poem about the incident by Raisa Golubeva—provided a much-needed supplement to the sparse prison rations.

Qurt, also called qurut or kurt, derives from the word for “dry” in many Turkic languages and is made by straining fermented milk from a sheep, goat, cow, camel, or mare until it’s thick enough to be rolled into balls and dried in the sun. In a 13th-century report from the Mongol empire, the Flemish Franciscan missionary Friar William of Rubruck described the result as “hard as iron slag.” Different variations exist throughout Central Asia, the Caucasus, and the Middle East, including the Persian kashk, Jordanian jameed, and Armenian chortan.

Qurt’s portable nature and long shelf life made it an ideal road food for Central Asia’s nomadic peoples. According to Kazakh historian Moldir Oskenbay—who likens the taste of qurt to “a dried and salted feta cheese”—it dates at least as far back as the seventh century B.C., when the Scythians roamed the Eurasian Steppe. Kazakh, Kyrgyz, Turkmen, Uzbek, and other groups of herders took along versions as they moved to graze their animals. “Qurt was a really good way for them to preserve yogurt so they could eat it while they traveled,” says Malika Sharipova, a food blogger from Uzbekistan who has written about making traditional Uzbek cuisine. Hardened qurt is also highly versatile: It lasts for years without refrigeration and can be eaten straight, dissolved in boiling water to create a beverage, or mixed into traditional soups and dishes like Tajik qurutob.

Qurt even gave nomads a strategic military advantage in the 12th and 13th centuries A.D. by allowing them to ditch cumbersome kitchen supply carts and travel light, Oskenbay explains in her paper “Fermented Dairy Products in Central Asia: Methods for Making Kazakh Qurt and Their Health Benefits.” Balls of qurt dissolved in water with flour and jerky made for quick camp dinners: “No need to search for fuel for the fire, or take time for cooking,” she writes.

Centuries later, freeze-dried qurt nourished Soviet cosmonauts in space. Today, it’s still hailed as a source of longevity, said to improve digestion, ward off osteoporosis, and support the health of children as well as pregnant and lactating women. Kept in a dry place, it will remain edible for several years, and some say close to a decade. “It won’t spoil, but it will get really, really hard,” Sharipova says. (If exposed to humidity, however, it can become moldy.) While qurt is traditionally made at home in rural areas and bought by city-dwellers at markets, mass-produced versions are now available at grocery stores and online.

You can make your own qurt at home, the way it’s done in Central Asian villages. However, it’s a multiday process and if you don’t have access to the sunny, dry weather of the Eurasian Steppe, you’ll need to employ a few hacks to “cheat nature,” as Max Malkiel—a home cook born in Tajikistan who now lives in Germany and posts recipe videos on YouTube—puts it.

Adapted from recipes by Malika Sharipova, Max Malkiel, and “Recipes from an Uzbek”


Note: Methods and terms for the various dairy products below may vary by culture and location.

To make qurt, first you need to make suzma, a creamy drained yogurt with a spreadable consistency. To make suzma, you need to make qatiq, a natural (and also delicious) drinkable yogurt. If you’d like to speed up the process, and you can find suzma for purchase in your area, you can also start there and skip to Step 3. (If you don’t have a Central Asian bazaar at your disposal, you may be able to buy suzma at a Central Asian shop like Brooklyn’s Tashkent Supermarket. Some recipes also describe how to make qurt from tvorog, a farmer’s cheese widely available at Russian grocery stores; I did not test this, but if you go this route, you’ll also want to start with Step 3 and ensure that your cheese is well drained before attempting to roll it.)

To make the qatiq, heat the milk in a pot to about 122° F (50° C). (If using unpasteurized milk, boil it first, then let it cool to this temperature.) If you don’t have a thermometer, turn the heat off when the milk is noticeably warm, but you can stand to hold your finger in it for 10 seconds without discomfort. Then stir in the yogurt. At this point, the contents of your pot will still be milky in consistency. Pour the mixture into glass jars and wrap them with towels to keep them warm; Sharipova suggests using three thick ones. (I wrapped my jars in dish towels, topped with hand towels, then covered them with a large bath towel and a blanket.) Leave the wrapped jars in a warm place and let them ferment for eight hours. Then enjoy a glass of creamy qatiq; it will be a drinkable but noticeably thicker liquid.

Now, it’s time to turn your qatiq into suzma. First, add salt to taste. Then carefully pour your qatiq into a flour sack towel. I found it easiest to do this by laying the cloth over a colander first. Secure the top of the towel with a rubber band and hang it over a bowl or your sink to drain. You can also use a cheesecloth, but make sure it’s not too gauzy. The qatiq should drip steadily as it drains, but you don’t want it to gush through all at once. Leave it for about eight hours as the whey separates.

Now we have suzma; set some aside to eat on bread or as a dip for vegetables. If you’ve purchased your suzma, it may be thick enough to begin rolling into qurt (Step 4). However, if you made your own, you may need to let it drain in the cloth for another few days to reach the optimal consistency. (I learned the hard way by trying to roll suzma that wasn’t thick enough and wound up with sticky, yogurt-covered hands.)

There is no exact timeline, but Sharipova says the suzma is ready to be rolled when you can stand a spoon in it. Mine took about two days to get there.

Once your suzma is nice and thick, add salt to taste and any additions, like ground red pepper or dried herbs. Roll it into balls, keeping in mind that smaller ones will dry quicker. (Mine were about the size of small to medium gumballs.)

Put your qurt balls on a wooden cutting board, cover them with a clean dish towel, and leave them in a warm, sunny place to dry for several days, depending on how hard you’d like them to be.

If warm and sunny is not in the cards where you live, you can use Max Malkiel’s method. (I discovered his advice after my first batch of qurt started to grow mold as it dried.) Set your oven on the lowest possible temperature—he uses 50° C, which is approximately 122° F—and place your qurt inside on a baking sheet lined with parchment paper for an hour. Do not preheat the oven first.

Enjoy your qurt and go slowly. A little bit of the salty stuff goes a long way! Store in a breathable cloth bag in a dry place or in a paper bag in the fridge.

St. Hildegard was a mystic, healer, and passionate proponent of spelt and nutmeg.
festivals

History and legend collide in the story of one seriously suggestive sweet.
ancient

Eat like a first-century Roman, using recent archaeological discoveries as your guide.
Video • Wonder From Home