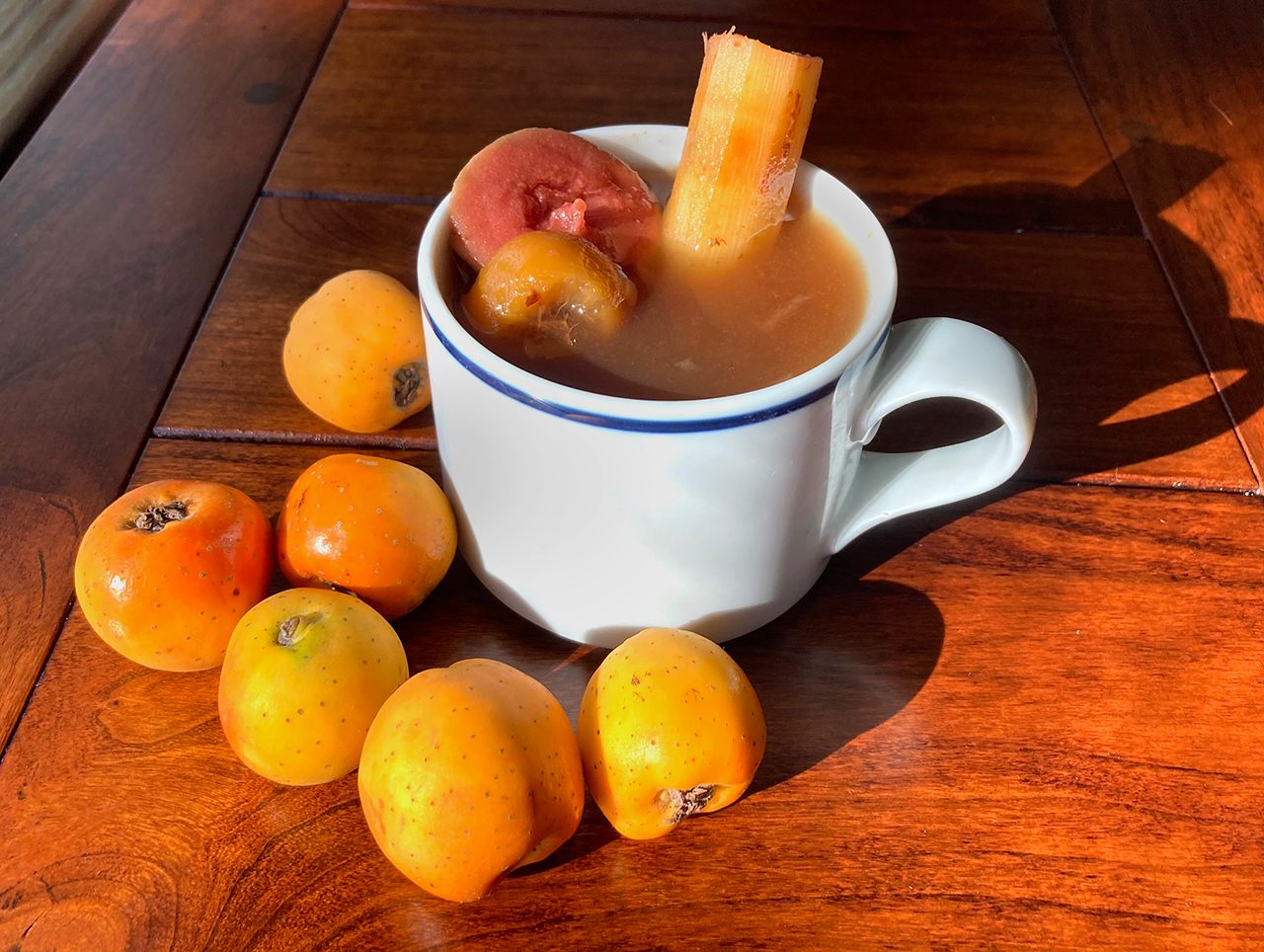 Ponche Navideño is now far easier to make in the U.S. All photos by Anne Ewbank for Gastro Obscura

In Mexico, ponche Navideño—or Christmas punch—is a holiday classic, served up at parties and posadas, neighborhood-wide re-enactments of Mary and Joseph seeking shelter for the birth of Jesus. “Christmas in particular has so many foods and rituals attached to it. So you would have your ponche and your tamales,” says Lesley Téllez, a food writer and the author of the cookbook Eat Mexico.

But for a long time in the United States, one vital ingredient for this Christmas specialty was forbidden fruit: fresh tejocotes. In fact, tejocotes were, until recently, the fruit most often confiscated by authorities at the U.S. border. As for why someone would risk a fine or confiscation for bringing the fruit illegally into the country, the answer is simple. Tejocotes are more than just an ingredient to be easily replaced or left out of ponche entirely. Tejocotes, journalist Maria Gaura once wrote, are “a symbol of Christmas as potent to Mexican-Americans as pine and mistletoe are to norteamericanos.”

A number of drinks across the Spanish-speaking world are called ponche, and their ingredients can vary widely. Mexican ponche Navideño is a sweet, hot, fruit-salad of a drink. A pot of ponche fills the whole house with the smell of cooked fruit, such as guavas, apples, tejocotes, raisins, and prunes, as well as the warm scent of cinnamon. These ingredients bob in a sweet, tangy mixture of water, tamarind paste, a whole cone of raw cane sugar (piloncillo), and, often, dried hibiscus flowers (jamaica). Final touches include sticks of fresh, fibrous sugarcane and a splash of rum, brandy, or tequila. The alcohol is optional, but makes the drink even more warming.

According to Téllez, tejocotes are often considered vital to ponche, giving it its unique perfume and thickness, due to their high levels of pectin. These small fruits, sweet and gooey when cooked, look like tiny apples, with speckled golden peels that darken to orange. But their scent, deeply fruity and reminiscent of guava, gives them away as something else entirely. Tejocotes, or Mexican hawthornes, are native to the Americas. Their name stems from the Nahuatl word for the fruit, texocotl. Extremely common in Mexico, especially in the highlands, the fruits have become a must-have at holiday celebrations. At Christmas, they’re added to punch, stuffed into piñatas, and eaten in preserves. Even during Day of the Dead celebrations, tejocotes are set out as an offering to the deceased.

However, until 2009, the United States Department of Agriculture confiscated thousands of pounds of fresh tejocotes a year from both travelers from Mexico and American markets. Authorities were worried that tejocotes could carry highly destructive fruit flies into the States, threatening domestic orchards. Soon, there was a black market for the golden fruits, due to their rarity and the effort it took to bring them over the border.

The fruits are so important that orchardists in the United States started growing tejocotes stateside to meet the demand. However, in 2015, the USDA finally allowed their import, after determining that the Mediterranean fruit fly had been largely eradicated from Mexico’s agricultural industry. These days, tejocotes abound during the holiday season. Téllez notes that, over the last few weeks, she’s seen tejocotes sold all over New York City, and in my own California hometown, both flea markets and grocery stores offer the fresh fruits.

Besides its importance as a Christmas drink, the recipe itself speaks to the global influences on Mexico’s culture and its cooking. Tamarind is originally from Africa, cinnamon is from Asia, while tejocotes and guavas hail from the Americas. “It’s another one of those things that has ingredients that are native to Mexico, but is also reflective of who came to Mexico after the conquest and what influences they brought with them,” notes Téllez.

Making ponche can take a while. Téllez’s recipe, for example, involves boiling the tejocotes to peel off their skins and digging into them to extract their teeny pits, not to mention peeling apples and scraping tamarind paste out of seed pods. But it’s worth the work, especially as the scent of sugar and sweet fruits fill your home. There’s not even a need to always make it yourself. Sometimes, vendors in Mexican cities sell cups on the street. “You’re walking and you’re like, “Oh, that smells good,” Téllez rhapsodizes. “Yeah, I’m going to get a cup of that.”

Should the pectin in the fruit thicken up the ponche too much for your liking, feel free to add water to taste, says Téllez.

Snapdragon is not for the faint-hearted.
food

Some of these gingerbread cookies take months to make.
Video • Wonder From Home