How to Make Sense of a Mass Grave - Atlas Obscura
Want to see fewer ads? Become a Member. 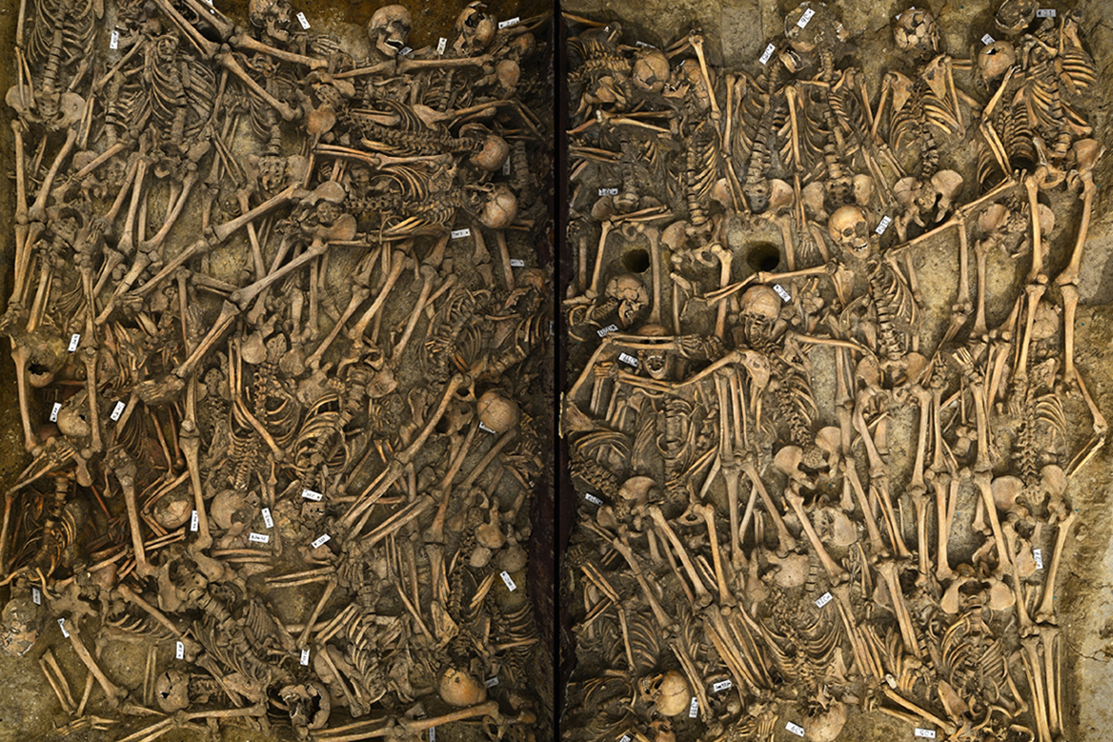 The mass grave found at Lützen. Nicklisch et al./PLOS One

In 2011, in the German province of Saxony-Anhalt, archaeologists were surveying a battlefield from a long-ago war when they detected the edge of a pit. As they probed the area further, they found that they had discovered a mass grave.

They began to excavate a pit about 11.5 feet by 15 feet in size, but from the moment news of the discovery began to spread, the archaeologists, who worked for government agencies, worried that treasure hunters would start to raid the site. They had already found evidence of illegal excavations.

Usually, a find like this might be carefully dissected in the place where it was found. But in this case, in part because of their worries about theft, the archaeologists decided to “block lift” the bones from the site—to cut the entire mass grave out of the ground and transport it somewhere safe.

There were other reasons to keep the grave intact, too, as the archaeologists write in “The Face of War,” their recent PLOS One report. “By coincidence, or perhaps intentionally, the last body placed in the grave was lying in a different position to the other individuals, in a cruciform pose on top of the other deceased. This crucial aspect of the overall impression would have been lost if the usual method of ‘dissecting’ the block had been applied,” they write.

But perhaps most importantly, keeping the grave intact conserved the powerful image, seen above, of these 47 individuals who died in the war. To the archaeologists, it was “a representation of war in all its cruelty.”

The people in this grave died during the Thirty Years’ War, the 17th-century conflict that reshaped the Holy Roman Empire, and they died in a battle known as one of the more pivotal and grisly conflicts of the war. Thousands of soldiers—perhaps as many as 9,000—died during the Battle of Lützen. The casualties included the King of Sweden, Gustavus Adolphus, who had been fighting to extend Sweden’s territory and power.

How do archaeologists approach the analysis of a mass grave? In this case, after deciding to block-lift the grave out of the ground, they had to cut it in half, to keep pieces of the brittle block from “breaking off during recovery.” They used a wire saw to split the block in two; even then, each section weighed about 25 tons.

Once the grave was secured, the archaeologists began working in one corner of the burial feature, removing the soil until the skeletal remains emerged. In a mass grave, says Nicole Nicklisch, the lead author of the PLOS One paper, “It is important to recognize the position and orientation of the body, which may be very difficult in a mass grave; it can change from body to body.” Using small wooden tools and brushes, the archaeologist cleared the area around the bones.

Until this point, they proceeded as they would have if the bones were still in the ground. But since they’d decided to preserve the grave as a whole, they did not remove the bones, which meant they could not observe some of the features in detail. Since there were only two layers of bodies, though, they were able to turn the block over, to examine the grave from the “back” and gather more information.

In the PLOS One report, the archaeologists describe the details of what they were able to learn about the people buried in this grave. There were 47 of them, most likely all men, although because they were not able to examine all the bones individually, there were 11 cases where they could not conclusively determine the person’s sex. They also tried to document how these people died, in order to better understand the realities of warfare at the time.

“I’m an anthropologist and osteoarchaeologist, so I’m always interested in analyzing skeletal remains to get information about cause of death,” says Nicklisch. “From the scientific perspective they tell us a lot about their fatal injuries and what happened on the battlefield, or at least in one area.” The Thirty Years’ War was fought in the period when guns were becoming more common on battlefields, and the evidence of it showed in the grave. “I’ve never seen so many gunshot wounds,” Nicklisch says. The team found that more than half of the men had gunshot wounds; others showed no obvious injuries and have may have died from gun wounds to their soft tissue.

Beyond the scientific reasons for excavating the grave and keeping it whole, the team also thought there was a powerful reason to preserve and display the grave, which was exhibited publicly for a period. “From an ethical point of view I have to emphasize that the exhibition of this grave was a statement against war,” says Nicklisch. “When we look at this mass grave, then we look in the face of war.”

Spellbinding selections from the Museum of Witchcraft and Magic.
mass gravesbonesgraveyardsmilitary historyarchaeologycemeteriesfeaturessciencemilitary

She's the only woman veteran honored with a monument at West Point. But where was she buried?
cemeteries

Before Arlington was a national cemetery, it was the Lee homestead, and then a tent city for occupying troops.
cemeteries

When a Philadelphia construction company dug up an old cemetery, local archaeologists stepped in to help—because there was no one else.
caves

Scientists know people were in Yukon 24,000 years ago. But what were they doing there?
Video • Wonder From Home