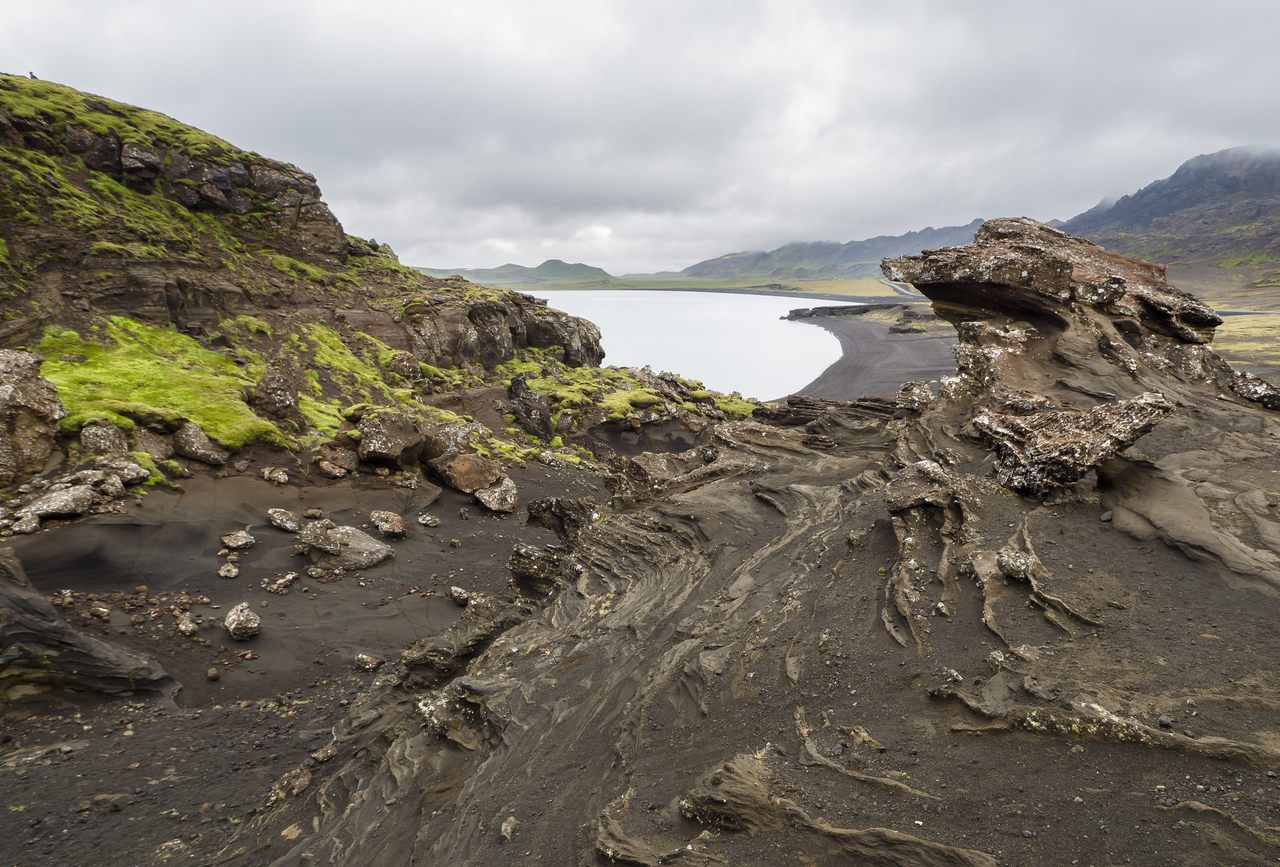 Across Iceland, proof of past eruptions is written on the landscape. James Petts/CC By-SA 2.0
In This Story
Destination Guide

This story was originally published in The Conversation and appears here under a Creative Commons license.

More than 17,000 earthquakes have been recorded in the southwest of Iceland, in the Reykjanes Peninsula, in a little over a week. People living in the area have been advised to be extra careful due to dangers of landslides and rockfall. Many of the larger earthquakes have even been felt in Iceland’s capital city, Reykjavík—where over half of the population lives—which lies only 27 kilometers (about 17 miles) away.

This has led to heightened concerns about the effects of even larger earthquakes, and also of a possible eruption from the Krýsuvík volcanic system in the area.

Southwest Iceland has a track record of centuries of calm, which we know can be broken by turbulent periods of intense earthquake activity accompanied by volcanic eruptions. It looks like we are entering the next turbulent period.

The most recent earthquake swarm is in fact the latest in a period of significantly heightened seismic activity that started over a year ago. The shaking of the Earth is the most obvious manifestation of the release of huge amounts of energy. But magma has also been quietly accumulating nearer to the surface—and when this happens, there is increased likelihood of the surface breaking and the volcanoes erupting.

On March 3, concern rose sharply as a type of earthquake activity characteristic of the movement of magma was detected, indicating that an eruption might be imminent. The Civil Defence and other authorities have held press conferences, closed roads, and heightened visual surveillance of the area above the potential eruption site. Of course, magma may move in the crust and then stop, but it is always wisest to plan for an eruption and then to scale back if nothing happens.

The problem is that the last time southwest Iceland experienced such a turbulent period of earthquakes and volcanic eruptions was in the 1300s—when there was no equipment to monitor seismic activity. There were also far fewer people around, which means that we don’t really know what signals there were before eruptions occurred. So there are huge uncertainties.

However, Iceland has a world-leading network for monitoring seismic and volcanic unrest, and an excellent track record of anticipating eruptions and of maintaining the safety of its population. So if an eruption did happen, chances are all will be well.

In Iceland, these are warmly called “tourist eruptions,” as they are relatively safe and predictable, and offer the opportunity for many hundreds of people to witness a magical natural spectacle—the creation of new land. In the past, tourists have flocked to Iceland to witness such eruptions, but at present there is a five-day quarantine period for tourists entering Iceland due to the pandemic.

At the current area of unrest, there are no nearby habitations—it is reassuringly remote. Lava streams flowing away from the area are very unlikely to damage any property on predicted pathways, but if the lava makes its way to the sea, it will cut off a few roads.

The biggest concern internationally about a volcanic eruption in Iceland is disruption to air travel. Not only can winds carry ash clouds swiftly towards western Europe (as we saw with the Eyjafjallajökull eruption in 2010), but ash clouds can get high into the atmosphere and into the stratosphere where commercial airlines travel across the busy Atlantic flight corridors.

But the volcanoes in southwest Iceland tend not to produce much ash, and so the risk to disruption of international air travel is considered very small. Should an eruption start, flights would be halted automatically at the Keflavík international airport, which is only 22 kilometers (roughly 14 miles) away, until a fuller evaluation has been carried out.

The wind direction has a major effect here, and given that the prevailing wind is from a westerly direction and Keflavík sits on the western side of this southwest peninsula, winds would be expected to carry any ash away from Keflavík. The crucial effect of wind direction was highlighted beautifully in 2010, when Keflavík airport remained open while airports across Western Europe were closed for weeks.

While current COVID-19 restrictions on entering Iceland will prevent hordes of tourists from traveling to see a potential eruption, there will be plenty of Icelanders traveling to observe it. They have a quirky saying in Iceland “whilst in most countries people usually run away from volcanic eruptions, in Iceland we usually run towards them.”

Dave McGarvie is a volcanologist at Lancaster University.

Researchers braved storms and monstrous underwater mountains to learn why one region’s earth-shaking is so peculiar.
disasters

Thousands died in 1986 when the crater lake unleashed a cloud of toxic gas. Could it happen again?
Video

5:11
Want to see fewer ads? Become a Member.
From Around the Web
Atlas Obscura Trips
Iceland in Summer: Journey Through a Fabled Land
View This Trip
Thanks for sharing!