Sold: A Set of 54 Whisky Bottles, One for Every Playing Card - Gastro Obscura
Want to see fewer ads? Become a Member. 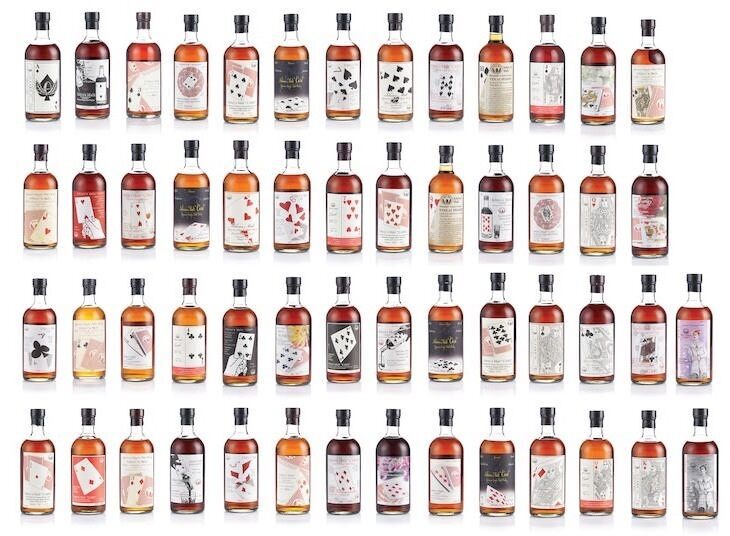 That’s how Ichiro Akuto, whose grandfather founded Japan’s Hanyu whisky distillery in 1941, decided to honor the company before it permanently emptied its barrels. After Hanyu ceased production and Akuto acquired the company’s equipment, he embarked on a years-long project of matching scores of different leftover whiskies with dozens of card-themed bottles. At 54 in total, one whole set represents a complete deck of cards. Last week, one of only four known complete sets of Ichiro’s Card Series sold at Bonhams Hong Kong for more than $917,000—that’s almost $17,000 per bottle, though some would surely challenge the idea that all cards (not to mention whiskies) are worth the same amount.

To get a sense of the variety in Hanyu’s reserves, let’s go suit-by-suit to look at a few examples of the whiskies auctioned in this lot:

Food & Wine reports that the sale reflects an ongoing trend in which rare wines and spirits are breaking records at auctions. Indeed, this sale broke the price record for a collection of Japanese whisky, just as last year a lone Yamakazi broke the price record for a single bottle of Japanese whisky. (It sold for more than a third of the Ichiro Card Series’ price.) Last year too, Bonhams Hong Kong broke the all-time record for sales of single whisky bottles with a 1926 Macallan Valerio Adami that went for more than one million dollars.

It better be really, really good.

Winning bidder take note: It is not safe to drink.
literature

Dickens spent the days before his death counting casks of whiskey.
whiskey

And partnering with a distillery to resurrect one.
collections

For decades, Jim Beam made decanters shaped like Elvis, the Mount St. Helens eruption, and more.
Video • Wonder From Home