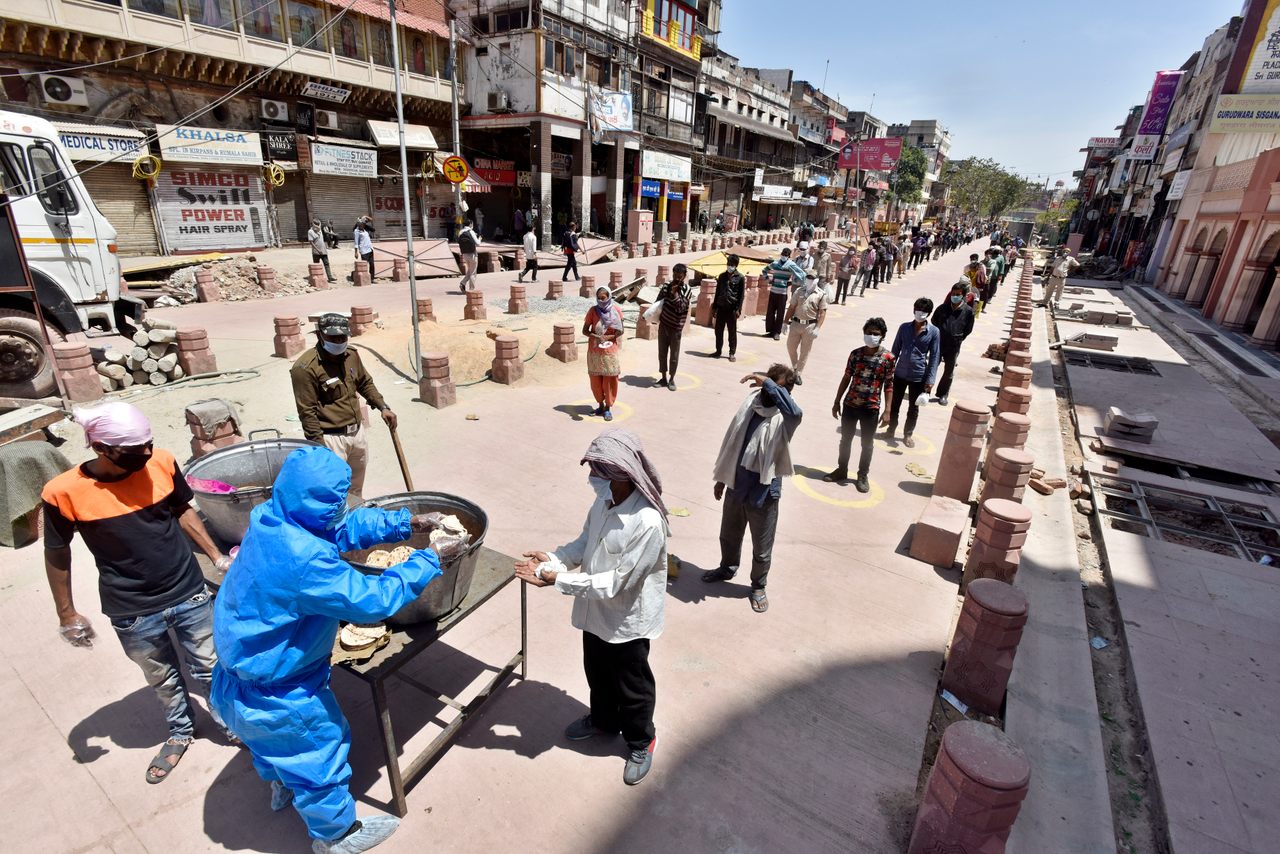 On March 24, scores of Indians hooked to their TV sets learned that Prime Minister Narendra Modi was to address the country at 8 p.m. Just days ago, in a similar address, he had requested a self-imposed, one-day lockdown to curb the spread of coronavirus.

When he heard the news, Abhisar Bose shifted in his chair at his home workstation in Mumbai. He had just enough eggs, bread, and packets of instant noodles in his pantry to make it through the next three days. His wife was already in Delhi with his in-laws. Soon he would finish editing the film he was working on and fly out to be with her.

Amy Parrish looked at her phone in Kolkata—her 10,000-rupee ($132) grocery order had just been cancelled by Amazon. Minutes later, her husband told her that a 21-day lockdown was starting in a few hours.

In Delhi, Irshad Alam Khubi received a phone call asking him to help arrange meals for daily wage earners. With the lockdown, they would be out of work, and no wages meant no food. A professional storyteller, Alam Khubi had grown up in the nooks and crannies of Delhi’s Turkman Gate area, and he knew several such workers personally.

The lockdown that Modi announced that evening was sudden: In just four hours, at midnight, a country of 1.3 billion people would be crippled with restrictions. Though rumors had been ripe of a longer lockdown, questions arose. Was movement restricted? Could you buy food and essentials? Did you need to stockpile for all 21 days?

The following day, it became obvious that not everyone was equally challenged. Food posts and news clips on social media spoke to the stark contrast between rich and poor, and between those prepared, or better able to adapt, and those who could not.

As an experiment, I took to social media to ask people for images of their first few meals during the lockdown. Nearly 100 people responded, and the photos they sent ranged from generations-old recipes to hurried bachelor meals, frugal meals to artisanal foods. They came from community-run kitchens and doctor’s tiffins on the medical frontlines.

Writer Ritu Bhatia’s photo from Mumbai is of a delectable chicken breast on a bed of lettuce that she salvaged from her pantry. Bhatia has turned her kitchen into a zero-waste zone. “My freezer is like a grocery store: Pesto in ice trays, even leftover Sangria. I freeze the peels of my vegetables and chicken scraps that I turn into stock.”

Reem Khokhar, a Destination Marketing Consultant, similarly says that “the lockdown has made us much more mindful of our consumption.” Her photo of spinach rice and a spicy okra curry is one of four meals rehashed from the same ingredients. She generously gave her elderly neighbors downstairs fruits and vegetables when they were stuck without groceries.

Bose never took that flight. In the days that followed, all flights were cancelled, and supply and delivery of food essentials ceased. Though deliveries later resumed, bachelor’s meals like the one in his photo were a staple for Bose. Still stuck at home in Mumbai, he says his wife is fundraising for charity kitchens in locked-down Delhi.

Parrish, an American photographer who has lived in Kolkata for eight years, was stuck without food staples as grocery stores around her neighbourhood shuttered. As she scrounged her neighborhood’s limited options, perishables were especially hard to find. Parrish’s home was also running low on drinking water. Since, in most urban homes, packaged water is the only safe option, she had to borrow a bottle from a neighbor. Her photo shows meaty coconut shells that she chanced on in the local market, and later turned into a refreshing ceviche meal. “Cancellation of my food delivery services taught me how to value the local shops,” she says. In gratitude, she wants to continue buying from them even after this is over.

Kohinoor Bibi did not send me a photo, but talks at length about her aged father, who was stuck without food in her village in East India. From her slum in Kolkata, it took several phone calls to convince someone to check on him and deliver food. Sadly, he was not alone. Several million Indians spent the first day of the lockdown without a single morsel of food. In villages of North India, children made headlines for eating grass to sustain themselves.

Alam Khubi started two community kitchens in response to that urgent call for help. Completely crowdfunded, they have fed nearly 2,000 unemployed workers every day, he says, and the food plate he sends me shows a surprisingly sumptuous chicken biryani. “Watered down lentils and rice, though [it] may look cost effective, actually ends up being just the opposite,” he explains. “People waste more.” He says they do not compromise on quality in his kitchens. “It’s about granting human dignity to those who are already battered.”

Anurupa Roy, who is a puppeteer, also served meals—in her case, to hundreds of migrant workers who were forced to walk back to their villages after trains and buses came to a halt. She shares photos of the food containers and tells me of a migrant who had been walking for two days without food. When prompted to take a second helping, the man said, “If I take more, how will the person behind me eat?”

Despite the huge disparities I witnessed when comparing these nearly 100 photos, and the apathy of a lockdown announced with a mere four-hours’ notice, I learned that closed gates did not mean closed doors. The grim reality of privilege that laces some of these plates was balanced by generous portions of empathy and compassion. Just like you cannot eat grass, you cannot eat gold, and that is something this virus is teaching us.

A server squeegees the window, too.
farms

15 places where rodents are celebrated, feared, preserved, and studied.
Video • Wonder From Home