The Trailblazing Brazilian Restaurant Serving a Taste of the Amazon - Gastro Obscura
Want to see fewer ads? Become a Member. 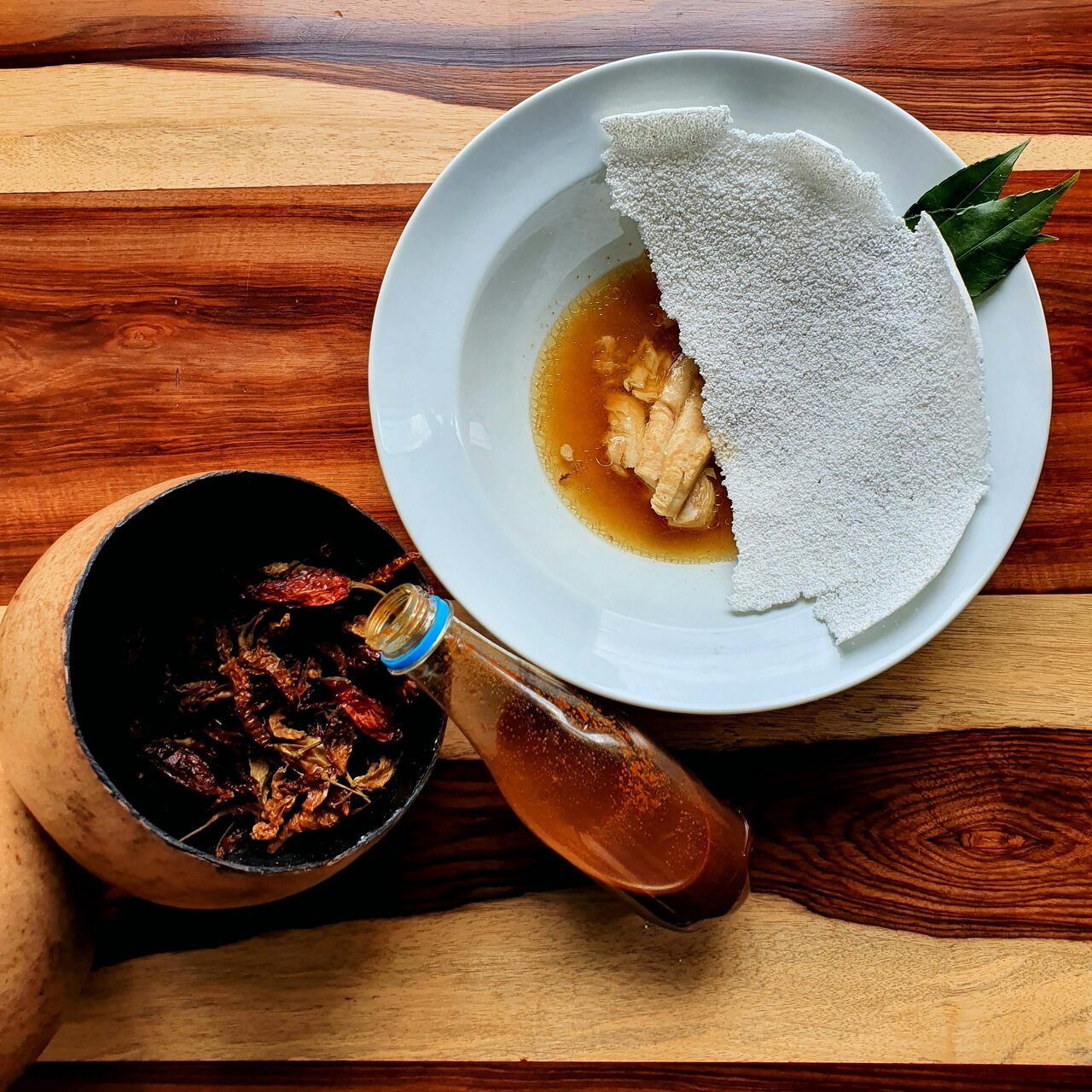 At first, Clarinda Ramos didn’t think it would be a good idea to open Biatüwi, the restaurant she now runs with her husband. Since she left her village on the banks of the Andirá River to study and work in Manaus, a city that serves as the main gateway to Brazilian Amazon, she has learned not to talk about the foods she ate as a child: the spicy ants she crumbled over fish stews, or guaraná juice, which she helped her mother obtain by grating the small red berries against the long, sandpapery tongue of a pirarucu, a giant fish that swims in the rainforest’s rivers.

“People have always made fun of the fact that I came from an aboriginal village,” she says. “We are seen as undeveloped compared to other societies, and our food is considered by many to be the kind only wild animals would eat.”

It was her husband, João Paulo Barreto, or Yupuri, as he was baptized in the Tukano language, who convinced her they should open Biatüwi, whose name, in his native dialect, means something like “spicy food.” It is a homage to the relationship native peoples in the Northwestern Amazon region have with chilis, which they use to cleanse their bodies, to protect themselves from diseases, to ward off laziness, and to season their food.

“Our demiurges historically adopted chilis to clean up food contamination, whether from game meat or fish,” explains Barreto. “More than ingredients, they can purify our food.” Opened in November 2020, Biatüwi is the first official restaurant to serve only indigenous food in the city.

The minimalist building that houses Biatüwi, which is tucked in a large, old mansion with stone pavements and wide sidewalks, feels a world away from the jungle environment where the food comes from. So do the modern stoves, refrigerators, and stainless steel countertop. “I think we grow up with this stigma that our cuisine is less worthy,” says Ramos, who is a descendant of the Sateré-Mawé peoples. According to her, even researchers who visit the villages often refuse to eat the food that native people prepare.

But Barreto and Ramos started to feel differently about their food when they became the researchers. Barreto holds a PhD in anthropology, which helped him to value the cultural empowerment of the people that, like his ancestors, inhabited Brazil before the arrival of Portuguese colonizers. He then convinced his wife to follow the same path, and Ramos, who previously studied education, successfully defended her master’s thesis in anthropology. “Studying was very important to open a new perspective in our minds,” Barreto explains. “We decided that we had to highlight the food as an enjoyable way to value our culture.”

But the restaurant, which used crowdfunding to open, faced unique challenges, beyond the stress of a pandemic that devastated northern Brazil and twice postponed their opening date. How could they serve traditional food and source ingredients from their home villages in an urban environment?

Although it is a multicultural city, Manaus is far from most indigenous areas, and there are no established suppliers. To get to Biatüwi’s kitchen, ants and chilies from the Tiquié River region, where Barreto was born, are transported aboard a low power boat to the closest city. During the up to four-day trip, drivers constantly unload and load the cargo to cross rapids, then transfer the ingredients to a larger boat for a three-day trip to Manaus. “If we want to serve the food of our home communities, we need the ingredients that we only find there,” Ramos says.

Ramos and Barreto do make an exception for fish, which could not arrive fresh after the long transit. So instead of native species from the upper rivers, such as uacará, pararuá, traíra, and surubim, the restaurant uses only matrinxã, a medium-size fish with a mild flavor, one of the most appreciated throughout the Amazon region. “Regarding the other ingredients that we use, I insist that they come from other small native communities,” Ramos adds.

The Baniwa women, for example, are in charge of picking the restaurant’s multicolored chilis, such as jiquitaia and dzaaka inapa, which they smoke in firewood and pound into powder. The indigenous men who hunt the ants—both maniwaras and saúvas, which have a naturally spiced flavor—know their habits and how not to depredate their environments.

Perhaps the hardest ingredient to source, however, is japurá, a small, brown, acidic, and earthy tasting fruit, which Ramos and Barreto use to make a paste that seasons mujeca, a soup of shredded fish thickened with tapioca starch. The fruit must be harvested in a flooded forest and the pulp ground, put into a kind of straw tube, and buried for two to three months to ferment. “Who says we don’t have elaborate cooking techniques?” asks Barreto, who points to how indigenous people laboriously extract cassava juice with a tipiti (a press made of wooden straw) and cook fish slowly with a wooden grill called a moquem.

But the restaurant’s flagship dish is quinhapira, a fish stew made with tucupi (the thick juice extracted with the tipiti) and native chili powder from a dozen varieties, such as malagueta and jiquitaia. Ramos and Barreto serve it with maniwara (a red ant with a mild and slightly spicy flavor), manioc flour, and paçoca (which is made of roasted maniwara crushed in manioc flour).

Traditional in many villages, quinhapira is an everyday dish, but also offered to guests as a farewell ritual. “When I am in my village, I have a bowl of quinhapira before going to the fields to give me energy, and usually before going to sleep,” says Barreto. “It is something that is part of our identity.” The dish it is served in is also full of symbolism: The cuia (a wood-like native fruit shell) has many graphisms carved by local women.

“People love it. It is a delicious recipe,” says Ramos. The educator-turned-cook states she doesn’t use any non-native spices, except for salt. “We also don’t use condiments that are traditional in many cuisines, like garlic, onions, olive oil, black pepper,” she explains.

Before the restaurant’s opening, she worried that people unfamiliar with Biatüwi’s flavors would not appreciate the food. To the couple’s surprise, though, it received a horde of guests during the month it opened—before closing again due to spiking Covid-19 cases and the identification of a worrisome variant in the Amazon—all curious about her indigenous recipes.

“Many friends and acquaintances have not yet had a chance to visit us. We get calls every day from people wanting to know when we will open the restaurant again,” she says. For now, though, her only certainty is that she wants to include new menu items and always have fresh guaraná (rather than the popular soft drink made from the same berry) that evokes her childhood memories to serve customers.

“If you ask a young man who left an indigenous village and now lives in the city what is his favorite food, he will say lasagna; he will say pizza,” says Barreto. “He will not say quinhapira for fear of discrimination. I hope this changes.” Thanks to Biatüwi, it could happen sooner than later.

An Artist Reunites Members of the 1898 Indian Congress

Native harvesters' access to the wild plant is jeopardized by its trendiness.
volcanoes

Eat a Nobel banquet from any year in the basement of Stockholm's City Hall.
East Palo Alto, California

An eatery within a Bay Area Buddhist temple pulls off all your favorite Vietnamese classics without the meat.
Want to see fewer ads? Become a Member.
From Around the Web
Travel With Atlas Obscura
Are you a curious traveler?
Join local experts in 50+ destinations for a once-in-a-lifetime journey.
View Our Trips
Thanks for sharing!