Investigating the Mystery of One of America's Most Endangered Bees - Atlas Obscura
Want to see fewer ads? Become a Member. 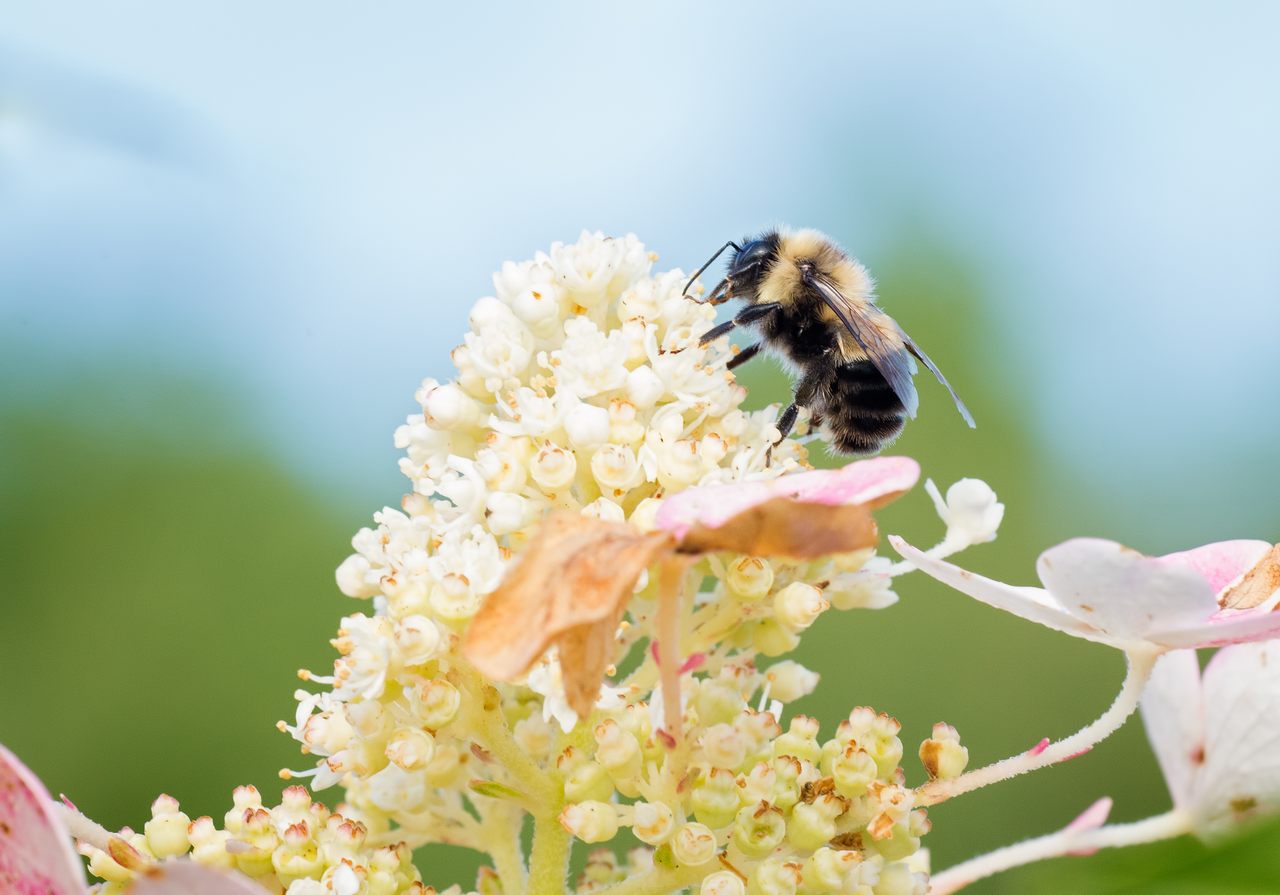 In 1998, a UC Davis entomologist named Robbin Thorp explored the forests of southern Oregon and northern California, hoping to learn more about a little-studied native pollinator that lived there. He visited nearly three-dozen sites where museum records indicated the yellow-topped Franklin’s bumble bee had once been seen. “It wasn’t the most common bee I saw,” Thorp recalls, “but I could find it at all the sites where it was supposed to be”—and even in some places where it hadn’t previously been recorded.

The next year he visited the same spots. Again, he found the bee at all the study sites. But the year after, quite suddenly, “the bee became difficult to find,” says Thorp. Bumble bee populations fluctuate from year to year, so at first he wasn’t alarmed. But when numbers didn’t bounce back, he realized the species might be in serious trouble. “Something was going on,” he says.

In 2003, he contacted other bumble bee specialists to see if they were seeing similar problems among the species they studied. They began looking, and concluded that three other species, all belonging to the subgenus Bombus sensu stricto, had also experienced sudden and steep declines. Last week, the U.S. Fish and Wildlife Service proposed that one of those species—the rusty patched bumble bee (Bombus affinis), named for the small, red-brown crescent on its back—receive federal protection as an endangered species.

There are 47 varieties of native bumble bee in the United States and Canada, and the International Union for Conservation of Nature (IUCN) estimates that more than a quarter of those species face the threat of extinction. But unlike honeybees—an imported species from Europe whose recent mass deaths have been well publicized and extensively researched—bumble bees receive scant attention. If the federal listing of the rusty patched bumble bee proceeds, however, that may change: It would be the first native bee in the continental United States to be protected under the Endangered Species Act.

The rusty patched bumble bee was once ubiquitous across a large, bat-shaped expanse that stretched from New England south through the Appalachians and into the Midwest, and southeastern Canada. Today, however, only a handful of genetically isolated populations survive in Wisconsin and parts of Minnesota. The Fish and Wildlife Service estimated in its listing proposal that populations have declined by as much as 95 percent since the late 1990s. “There are a few little spots where we know they are,” says USDA research entomologist Dr. James Strange, “but only a really few spots.”

What caused the rusty patched bumble bee to disappear? As with many ecological mysteries, there’s not one easy answer. Urban sprawl and agriculture’s continuing shift from small, diverse farms to vast swaths of single-plant monocrops have fragmented habitat and left fewer hedgerows and native plant blossoms to feed pollinators. Agricultural and garden pesticides can kill or weaken bees. And in the specific case of the rusty patched bumble bee, some scientists point to pathogenic intruders, particularly a fungal parasite that may have grown more virulent thanks to our love of year-round greenhouse tomatoes.

More than 85 percent of flowering plants require the help of pollinators to reproduce—that translates to one in three bites of food we eat. Farmers generally rent honeybees, which live in large, easily portable colonies, to pollinate crops such as almonds and cherries. But certain plants—such as tomatoes, sweet peppers, eggplants, cranberries, blueberries—respond especially well to “buzz pollination,” a behavior unique to bumble bees, which latch on to a flower’s anthers with their mouthparts and vibrate their wings at a frequency that dislodges trapped pollen. Buzz pollination increases the weight of tomatoes by 5 to 16 percent, according to Strange.

In the 1990s, as the greenhouse tomato business grew from a boutique industry to a major source of year-round tomatoes, the commercial bumble bee industry grew along with it. Thorp believes those mass-produced bees carried with them a fungal microsporidian parasite called Nosema bombi, which caused a collapse in populations of commercially bred western bumble bees in the 1990s, and may have spread to bees in the wild as well. The rusty patched bee, along with the three other declining species in its subgenus, carry particularly high loads of the parasite. “Because all those species collapsed at the same time in such a dramatic way, the belief is that the subgenus is for some reason very susceptible to this pathogen,” says Rich Hatfield, a conservation biologist with the Xerces Society for Invertebrate Conservation who helped spearhead the petition to list the rusty patched bee. Other pathogens, such as viruses spread by managed bumble and honey bees may also be a factor.

Federal protection could help the struggling bees in a number of ways, says Hatfield. “The measure that would help most would be to regulate the commercial bumble bee industry,” he says. “Nobody’s testing those commercial bumble bees for diseases.” In an email, Netherlands-based Koppert Biological Systems, the only company currently rearing bumble bees in the U.S., notes that “there is no proof for the invasive pathogen hypothesis,” and that their bees are raised in a “safe and controlled manner” in the company’s Michigan facilities, including frequent internal and outside audits, tests and inspections. In addition, the company’s bumble bee production is “inspected by Michigan State Department of Agriculture which certifies the bees as disease free for export purposes.”

An endangered designation would also bring additional research funds that would allow scientists to better understand these little-studied native bees, and would help to protect critical habitat and forage. The Fish and Wildlife Service proposal noted that bumble bees may be more vulnerable to pesticide exposure than honeybees. Hatfield hopes an endangered designation will force the Environmental Protection Agency to require that pesticides, particularly a newer class called neonicotinoids, be tested for their effects on native bees. “There is a whole suite of insecticides that are broadly used throughout North America and the only species that the toxicity has been tested on is the honeybee,” he says. “Using them as proxy for all the bee species in North America is not appropriate.”

The agriculture industry is likely to disagree. After the listing proposal, CropLife America, the trade group representing pesticide manufacturers, said in a statement that “field studies have consistently found no unreasonable adverse effects on pollinator populations when pesticides are applied according to label directions.” In comments opposing the original listing petition, the Independent Petroleum Association of America argued that programs already in place to preserve habitat for honey bees, monarch butterflies and northern long-eared bats were sufficient to protect bumble bee populations.

But scientists believe that without endangered species protections, prospects are dim for the rusty patched bee. “We have a bee that is on the brink of extinction and now we have a chance to do something about it,” says Strange.

For the Franklin’s bumble bee, that chance has, in all likelihood, been lost. In 2006, Thorp visited a spot high in the Siskiyou mountains in southern Oregon. Just below the summit of Mt. Ashland, along a Forest Service road about 50 yards above the Pacific Crest Trail, “there’s a seep area that keeps the vegetation moist,” says Thorp, “where plants keep flowering for a really long time.” As Thorp walked past the meadow, he saw a yellow-topped Franklin’s bee bumble by—the first he had seen in three years. “I wanted to photo-document it but I didn’t have my camera with me,” he says.

It was the last Franklin’s bumble bee anyone has seen. Scientists now believe it is extinct.

The proposed listing opens a 60-day period for the public to provide comments and additional information about the rusty patched bumble bee. The public comment period runs through November 21, 2016. To submit comments or to view documents and comments on the bumble bee listing, visit: https://www.regulations.gov/document?D=FWS-R3-ES-2015-0112-0028/.

We're Getting Closer to Knowing Why Bees Are Dying Off Worldwide

An incident with a slingshot led scientists to a greater understanding of the relationship between the insects and their host trees.
science

Extreme environments offer them an unexpected paradise, and now researchers want to get a head count.
Video • AO Docs