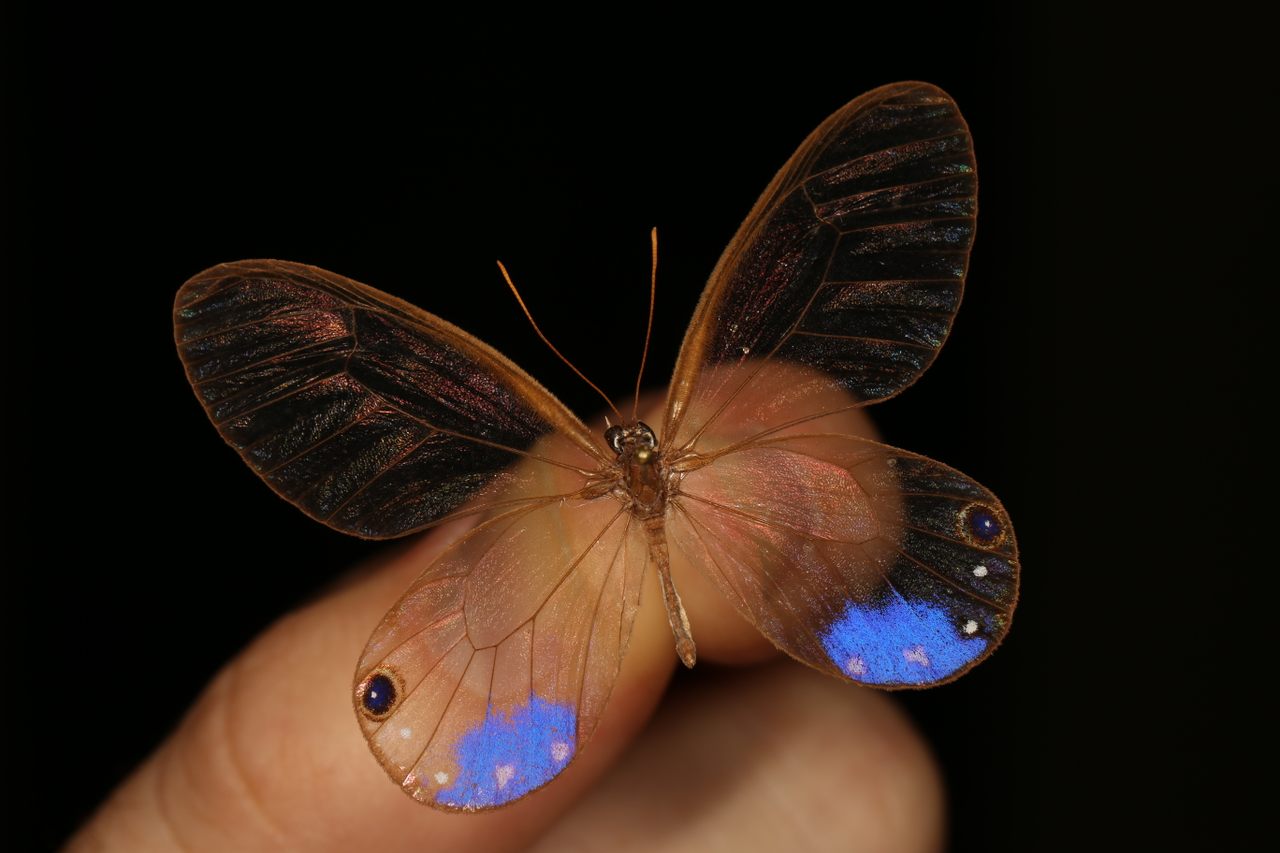 Several adaptations make the wings of some butterflies, such as this Cithaerias esmeralda, clear. Courtesy Aaron Pomerantz
In This Story
Destination Guide

While trekking through the Peruvian rain forest, an eight-hour boat ride from the nearest jungle settlement, biologist Aaron Pomerantz saw what seemed like tiny invisible jets zipping across the trail. “I was out there with a net trying to catch things,” he says, “and these just changed direction and vanished.”

It was his first close encounter with clear-winged butterflies, insects that inhabit Central and South American forests and have a remarkable means of camouflage: see-through or “glass” wings that make them particularly hard to spot in the dense understory.

“It’s like the power of invisibility,” says Pomerantz, lead author of a recent study in the Journal of Experimental Biology that examines how clear wings develop. “If you can put on an invisibility cloak, it’s a lot harder for predators to find you. In ocean environments there are lots of transparent species, but on land it’s much less common. And that really gets into the question of, ‘What does it take to be transparent on land?’”

By studying the wings of the species Greta oto, also known as the glasswing butterfly, at various stages of pupal development, Pomerantz and his colleagues at the University of California, Berkeley, the Marine Biological Laboratory in Woods Hole, and Caltech, found a few factors. There are modifications in the shape and density of the microscopic scales that typically create a butterfly’s colorful patterns. A layer of teeny waxy pillars also acts like an extra antiglare coating.

If it seems like a unique adaptation, it’s not. “This has evolved multiple times,” says Pomerantz. There are several hundred species of butterflies and moths with glass wings, he notes. Though they represent only a small portion of the order Lepidoptera, they make up most of the rare instances of such transparency on land. Glass frogs, which exhibit varying degrees of skin translucence, are another example.

The ocean, on the other hand, brims with see-through species, from jellyfish and sponges to crustaceans, cephalopods, and even fish. Earlier in summer 2021, two rare sightings of a glass octopus were made during an expedition, aboard the Schmidt Ocean Institute’s research vessel Falkor, to the watery depths off the remote Phoenix Islands in the Pacific Ocean. Being invisible, it turns out, is much easier to achieve in the ocean than on land, partly because of the visual and physical properties of water.

“You can think of it like having a piece of glass in water,” says marine biologist Laura Bagge. “That environment is much more featureless than it is on land, and you don’t have to deal with gravity. So most of these animals are some sort of watery, buoyant thing, without backbones or dense structures that are needed to survive on land.”

Imagine that classic Jaws scene—the one from the shark’s point of view—where a swimmer’s silhouette stands against the light streaming down from above. Where the sun shines, it’s easy for underwater predators to see opaque shapes, so being transparent helps you slip by. Deeper in the ocean it remains useful because even in the aphotic zone—the depths where little or no sunlight penetrates—plenty of bioluminescent animals emit light of their own, Bagge says.

Now a senior biologist at Torch Technologies in Florida, Bagge became fascinated with animal transparency during a research cruise for her dissertation at Duke University. She had dipped her hand into a bucket of sea creatures and pulled up a mysterious specimen. “It was hard, like a lobster, but it was a completely clear animal,” she says. It was a shrimp-like crustacean, Cystisoma, which can grow as large as a human hand. “They’re so cool because they have a hard outer shell and are packed with muscle. How do you make that clear?”

Cystisoma shells, she discovered, have bumpy microscopic structures similar to those on the wings of glasswing butterflies. These nanostructures have inspired applications for anti-reflective coatings in solar panels, glasses, and cameras. The muscles in Cystisoma have other adaptations to make them see-through, a topic Bagge is describing for a future research paper.

As cool as clear can be, sometimes it actually helps to be opaque. To elude deep-sea predators that have evolved biological searchlights to cast on potential prey, two cephalopods—the octopus Japetella heathi and the squid Onychoteuthis banksii—have the best of both worlds.

“Most of the time they’re going around clear,” says Bagge, “but if a predator shines a blue light on them, they immediately switch to a kind of pigmented cloak that absorbs the light. If they were completely transparent at that depth, it would be like shining a flashlight on a window at night. You would reflect something back, versus absorbing light like black velvet in the night.”

It muffles the clicks of ravenous, echolocating bats.
zombies

A conservation biologist in Argentina once hosted one of the animals in her living room, but finding them in the wild has proven far more difficult.
Video • AO Docs

3:38
Want to see fewer ads? Become a Member.
From Around the Web
Atlas Obscura Trips
Peru: Machu Picchu and the Last Incan Bridges
View This Trip
Thanks for sharing!