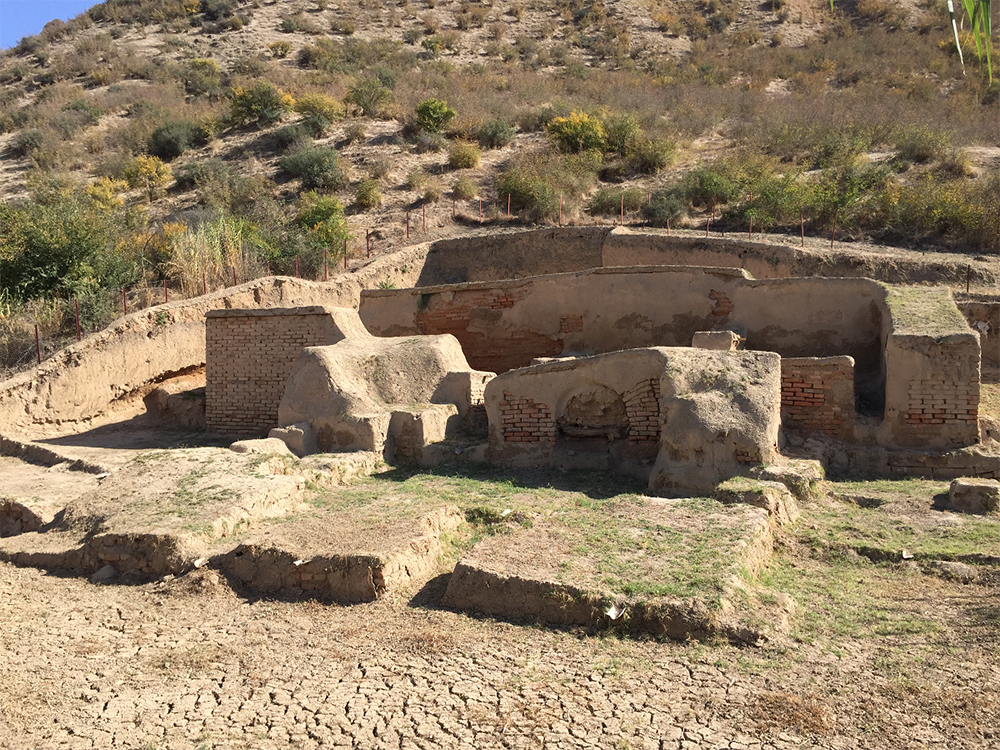 The end of the line – the final fort on the eastern end, near Kaser-e Pishkamar, hugs the foothills of the eastern Alborz. All Photos: Stuart Denison

In northwestern Iran, running for almost 200 kilometers from the southeastern shores of the Caspian Sea to the mountains of Bilikuh in the east, lies the remains of the Great Wall of Gorgan—once the largest defensive structure ever built.

It protected the ancient kingdoms of the region from raiding parties who would sweep down across the plains and deserts to the north. It was several meters high, and impressively thick, providing a secure imperial frontier, and was buttressed by 40 permanently garrisoned fortresses containing tens of thousands of soldiers.

It was so well-known that it allegedly factored into the plans of military legends such as Genghis Khan. Today, however, it’s been almost entirely forgotten—many locals living within a few miles of it don’t even know of its existence.

The reasons for this are relatively understandable. Much of the Great Wall of Gorgan now lies buried under several meters of earth and sand built up over time, leaving only a large raised mound which has tended to serve as a boundary between farmers’ fields, or the demarcation line of a modern village.

The full extent of the construction was not rediscovered by archaeologists until 1999. Large sections of the remains are not discernible from ground level, but become strikingly clear from the air.

Despite laying dormant and unknown for more than 1,500 years, recent excavations have revealed that the Great Wall of Gorgan was a mighty enterprise of significant cost and investment. The sheer size and scale of the construction—larger than the combined area of the Roman-built Hadrian’s Wall and Antonine Wall in the United Kingdom—shows how strategically important it must have been to defend this open flank of the Persian empire.

This was a well-organized, consistent effort from start to finish. A complex logistical system was set up to fire mud bricks of a uniform size and shape (40 x 40 x 10 centimeters), which meant that the wall could be built quickly and easily by the engineers, while maintaining the quality of construction. Remains of these kilns have been found shadowing the course of the wall.

The Great Wall of China, by contrast, varies hugely in terms of size, quality and material from place to place. The format of the Gorgan wall hardly changes at all, remaining 10 meters wide and three meters tall for almost its entire length, presenting an insurmountable barrier to the horsemen of the raiding forces. One of its many nicknames, “The Red Snake,” comes from the color of its bricks.

The geography of the region is key to understanding the need for such an immense defensive project. The southern shores of the Caspian Sea, known as Hyrcania, are verdant, fertile, and have a mild climate year-round—all of which was ideal for sustaining large populations by agriculture and hunting.

Hyrcania, as part of the Sassanid Empire, was well-protected by sea to the north and mountains to the south, but lay wide open to the plains in the northeast, in modern Turkmenistan. These plains were traversed by the White Huns, who saw Hyrcania’s riches as a ready source of plunder. Their attacks were well-documented, and became so repeated and so costly that, sometime in the 5th Century, a wall was built to keep the raiders out.

The exact dates of construction are unknown, but the evidence suggests the wall was put up with speed and utility in mind. The first part of it can be found near the town of Qomishan, a couple of miles from the current Caspian coastline (due to a higher sea-level in that period), from where it tracks the course of the Gorgan River, past the city of Gonbad-e Kavous, eventually winding its way up into the foothills of Bilikuh, part of the extended Alborz range.

Also known as “The Golden Wall,” it was heavily garrisoned, with the most recent estimates putting the number of soldiers protecting the wall at any given time at around 20,000. Several of the forts have been excavated, revealing a disciplined, practical approach to defense, with regularly spaced outposts and strong points, each protected by around 500 soldiers based in a nearby fort.

At strategic weak points, such as Gokche, where the wall crosses a river, additional fortifications and dams were built to prevent covert infiltration by water. Bits of these fortifications still stand proudly, guiding the river’s course to this day.

At the fort overlooking the Gokche crossing, where excavations are currently underway, the simple and hard life of a frontier soldier can be guessed at: it was a life spent in cramped mud-brick barracks open to the heat of the plains and the cold of the desert winter nights. Earthen ovens were used to make plain bread, while other food would have been hard to come by on these northern borders.

The relative lack of personal items found in the dig suggest that these camps were purely for soldiers—there is very little trace of families or camp followers having lived there, and the bones dug up nearby are all from adult males.

The remains of certain parts of the wall can be visited today, though they’re not easy to find. The best-restored fort is the final one on the eastern end of the wall, tucked up against the side of a mountain, which provided a natural defense once the man-made one reached its conclusion.

Near the village of Kaser-e Pishkamar, efforts have been made to preserve the remains of this last outpost, allowing visitors to get an idea of what this imperial Persian power managed to achieve on its borders more than 1,500 years ago.

The archaeological record confirms that all this effort was largely successful in stemming the raiders from the north, and the frontier region’s fortunes improved significantly in the century following the wall’s construction. Despite its apparent success, however, and the wall and its forts were inexplicably abandoned only 200 years later.

All activity on the site mysteriously ceases, showing that it was impractical, unnecessary or impossible to maintain. Perhaps the troops were needed elsewhere, or money was a problem with dynasties feuding, or the threat of raiding lessened. Whatever the reason, this massive project—the largest in the world at the time—was left to gather dust and, like the empire that built it, be slowly buried by the shifting sand.

Australian Cow Swims to Freedom, Stays on the Lam for 24 Hours

Life Along the Border That Cuts Cyprus in Two

In Nicosia, physical barriers separate the Greek and Turkish communities—but many residents don't seem to mind.
Want to see fewer ads? Become a Member.
From Around the Web
THE GASTRO OBSCURA BOOK
Taste the World!
An eye-opening journey through the history, culture, and places of the culinary world. Order Now