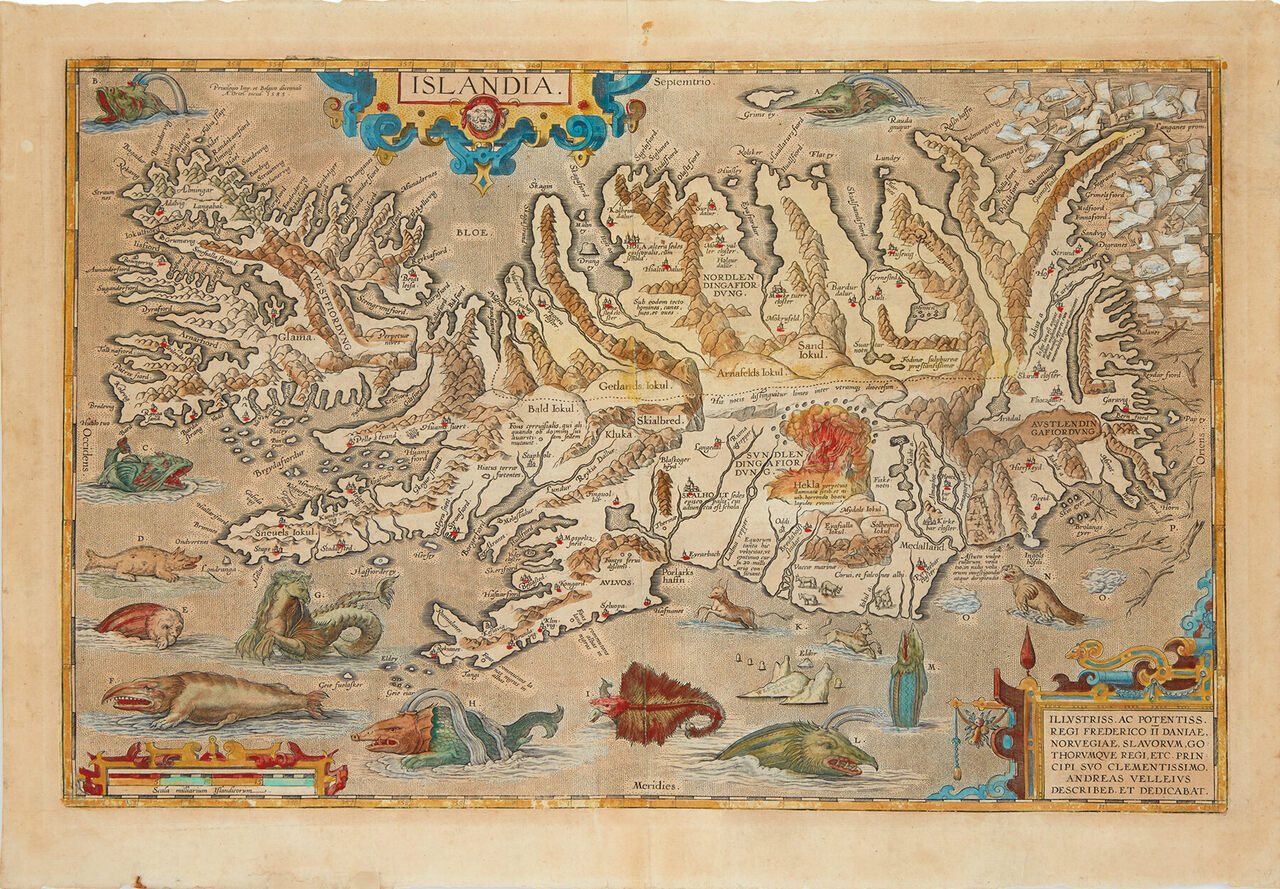 There’s a lot to look at in Abraham Ortelius’s map of Iceland. The Antwerp-born mapmaker, who compiled the Theatrum Orbis Terrarum, regarded as the earliest modern atlas, was also among the first to annotate the country in considerable detail. Building upon the work of Andreas Velleius and Gudbrandur Thorláksson (Guðbrandur Þorláksson), an Icelandic mathematician and bishop, the geography of Islandia is vivid. Look for the vast network of settlements, fjords, and mountains. Wander toward the center of the engraving, then south, and you’ll find Hekla, the volcano; mid-eruption, it spews forth an angry torrent of red and orange.

Iceland being an island, much of the chart is made up of water. That’s where you’ll find pearlescent shards of ice on the top right, bobbing beneath packs of loafing and wrestling bears. Here also be fractured tree trunks and branches, bandied about by the waves, and blobs of spermaceti floating like oily icebergs.

And, of course, much of the water is home to a marvelously oddball menagerie. Many of these creatures are native to other maps. Ortelius explicitly invokes Olaus Magnus, who had, just a few decades earlier, drawn one of the earliest detailed maps of the Nordic world, with waters full of toothed, sharp-tailed creatures. (Another common go-to guide for sea-dwelling scaries was a chart by Sebastian Münster, whose bestiary evolved from Magnus’s.) The striped fish with a bulbous, fringed head, busily devouring a seal (labeled “E” on Ortelius’s map), looks much like Ziphius, a creature on Magnus’s map, which was called the Carta Marina. Ortelius notes that he looked to Magnus for inspiration for the hyena (or sea-hog), too, borrowing its porcine snout and furry fin. A massive crustacean, with a flailing human in its clutches, apparently didn’t make the cut.

These sea beasts weren’t only there to horrify or delight. “A lot of them were taken from what the cartographers viewed as scientific, authoritative books,” Chet Van Duzer, author of Sea Monsters on Medieval and Renaissance Maps, told Lapham’s Quarterly. “Most of the sea monsters reflect an effort on the part of the cartographer to be accurate in the depiction of what lived in the sea.”

Islandia appeared in Ortelius’s atlas between 1590 and 1612. As the 17th century wore on and cartographers continued to chart the world, mythical map beasts eventually went extinct—and the waters grew much less whimsical.

A 1603 edition of Islandia is up for sale this week at Swann Auction Galleries, where dealers expect it to fetch between $3,500 and $5,500. Meet some of the creatures you’d adopt if you brought it home:

The Nahval is no looker. (Look for it labeled “A” on the map up top.) Water pours out of two spots in the fish’s head, above a hard-set scowl. The creature isn’t easy on the eyes, and it’s not kind to the stomach, either. “If anyone eats of this fish, he will die immediately,” cautions the key (translated from Latin into English). Eating the fish’s body may be ill-advised, but nibbling on the massive tooth jutting out above its mouth? That might be a different story. The particularly pointy appendage was thought to be a “a good antidote and a powerful medicine against poison,” often sold as a unicorn’s horn, the key adds.

The Whale That’s a Lot Friendlier Than It Looks

Steipereidur has long fangs that overlap its lips, and a mouth that draws to a sharp beak. It’s a foreboding face, but might belie a cuddly personality. This giant is “a most gentle and tame kind of whale,” the key assures, one that fishermen will defend against wilier, more aggressive species.

Skautuhvalur is “somewhat like a shark,” but “infinitely bigger,” and “fully covered with bristles or bones.” It has the visage of a squirrel with the body of a coiled fern frond. When it emerges, it’s the size of “an island,” and has no trouble overturning ships.

The Fish That Lurks With Its Head Above Water

The Staukul is in no hurry. Hungry for a hint of human flesh, it “has been observed to stand for a whole day long upright on its tail,” waiting for seamen to sail past.

The Creature With a Horse’s Mane and Dragon’s Tail

Hroshualur is a “seahorse,” but bears no resemblance to the translucent creatures floating in aquariums. The equine neck and tousled hair evoke something that gallops across land, while the scaly tail and webbed feet recalls something from the deepest recess of sea-sprayed caves.

Sea serpents, cannibals, and one of the earliest mentions of California are features of this spectacular map.
objects of intrigue

A recently sold letter from medical pioneer Edward Jenner provides some insight as to why.
music

The papers of Tony Glover, "musician's musician" and journalist, include many other luminaries as well.
Video • Wonder From Home

11:53
Want to see fewer ads? Become a Member.
From Around the Web
Travel With Atlas Obscura
Are you a curious traveler?
Join local experts in 50+ destinations for a once-in-a-lifetime journey.
View Our Trips
Thanks for sharing!