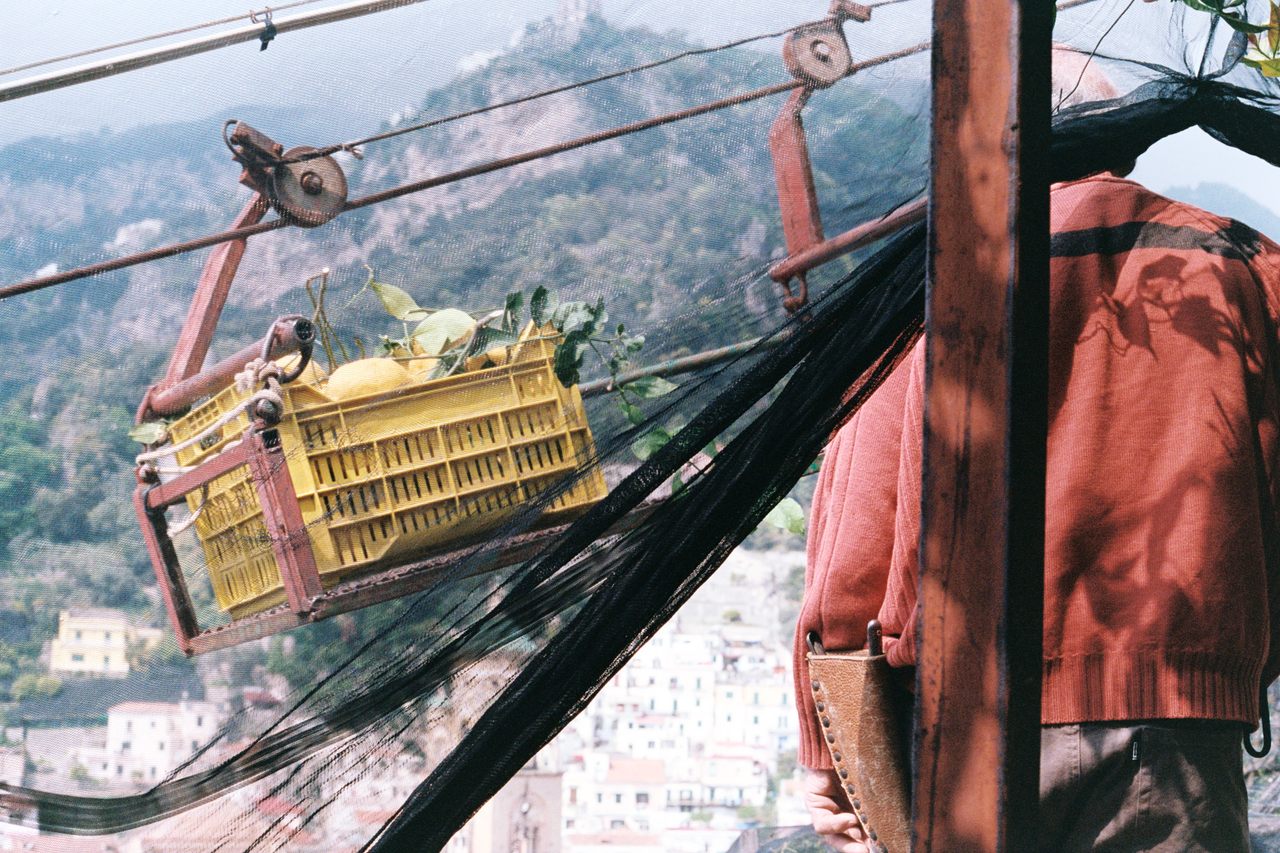 Steep slopes made the pulley system at the Aceto farm a necessity. Courtesy of Sophia Massarella
In This Story
Destination Guide

A few years ago, photographer Sophia Massarella asked the librarian at London’s Victoria & Albert Museum to pull Hesperides from the stacks, on a whim. The 17th-century treatise on citrus sounded intriguing, since beyond knowing she loved eating acidic lemons and oranges, she didn’t know much else about the fruits.

When the hefty volume reached her table, she was blown away by Giovanni Battista Ferrari’s masterpiece. Massarella leafed through the Jesuit scholar-turned-botanist’s intricate illustrations of citrus varieties she’d never seen before, blueprints for citrus orchards, and even his drawings of farming tools. By the time she left the museum that day, she was hooked.

“It sent me into a citrus frenzy,” she recalls. “People see it as something very readily available—you go to the grocery store and see a lemon or lime—but you don’t actually ever think about where they come from, the history behind it, the many varieties.”

For nearly a millennium, most of Europe had just one citrus variety and it was barely edible: the thick-skinned citron. With a bumpy rind and almost no juice, Europeans ignored its small interior segments in favor of a candied version of its peel. Still, it grew all over the Italian peninsula, and other citrus fruits eventually followed. By the time Ferrari wrote his book, the sunny Mediterranean region was full of citrus in all sizes, flavors, and colors.

Ferrari sent a questionnaire to citrus growers all over Italy, asking them for fruit names, about the appearance and cultivation of their trees, and how they used the harvested crop. Eager farmers sent him detailed letters back, which formed the basis for Hesperides, or The Cultivation and Use of Golden Apples (1646)—one of the first taxonomic studies of citrus.

Seeing a first-edition volume of the book inspired Massarella to embark on her own 21st-century version of Ferrari’s quest, calling and emailing small-scale citrus farmers all over Italy to learn about their centuries-old agricultural methods, some of which even predate Hesperides. “I just started going on this goose hunt of citrus farms,” she says of the photography project she’s launched to document these Italian traditions, which she calls the Citrus Archive.

Massarella finds small farms using older ways of growing citrus, and has visited nearly 20 to date. During the winter, she flies from her London flat to southern Italy to see blood oranges, oranges, and bergamots. In the summertime, she photographs lemons in Amalfi or Lake Garda. Early fall is when rabbis descend on Calabria to harvest perfectly shaped citrons for the Jewish holiday of Sukkot (a sight Massarella is still hoping to be allowed to photograph someday).

One of her first visits was to Limonaia la Malora, a father-and-son farm with a restored lemon house (limonaia) along the northern Italian Lake Garda, where hundreds of orchards once flourished. Since northern Italy’s colder climate isn’t citrus-friendly, Franciscan monks started building lemon houses in the 14th century to shelter the trees during winter.

Permanent stone walls and columns surrounding the orchard are outfitted with a wooden slat roof and walls during the colder months, shielding the trees from wind and cold. Gaps between slats are carefully plugged up with hay, in a process called stupinatura, and terracotta pots filled with water are placed throughout the limonaia as thermometers. If ice forms on the water, Giuseppe and Fabio Gandossi—the duo behind Limonaia la Malora—know it’s too cold and light a controlled bonfire near the limonaia to warm the trees.

Massarella visited the farm when Fabio was dismantling the limonaia for the summer. “Everything is done by hand, completely, as it was in the 15th century,” she says. “There’s absolutely no machinery, and it takes almost 14 days to uncover and cover back up every time.” Once all the planks are detached, they’re put in a special casello—a custom shed where the building materials and tools are stored until they’re used in the winter.

The process is labor-intensive, a reason the Gandossis have one of the last functioning lemon farms on the lake. “Which is quite sad because the Lake Garda lemons are really interesting. They’re quite a bit more bitter, but they’ve got a really wonderful taste,” Massarella says. “You can’t really find Lake Garda lemons anywhere anymore.”

Another type of lemon house is used in the warmer south, in Sorrento, even though it’s easier to grow lemons there. Chestnut wood is hand-chiseled into posts that are tied together as mats, and laid over the trees as wintertime roofing. Massarella visited Il Giardino di Vigliano, a farm still using these pagliarelle, and the one family that still makes them.

“There’s one farm that uses a little bit of the pagliarelle, but it’s on one small section of the farm as a nostalgic thing,” explains Massarella. Most farms have switched to plastic netting, which is cheap but not as charming. “[Pagliarelle are] really expensive and they’re wood, and every 10 to 15 years they need to replace them.” Some restaurants and hotels still order the mats as decor, but farms can’t afford the added cost.

Meanwhile, on the Amalfi Coast, a century-old pulley system at the family-run Aceto farm has survived because it saves costs—in this case, of labor. Lemon trees grow there on dramatically steep cliffs (their roots actually preventing erosion by holding rock together), but harvesting the fruits involves carrying containers weighing around 120 pounds down plunging paths to a paved road.

At the Aceto family’s sixth-generation farm, lemon-laden crates are loaded onto a cable-mounted rack that carries them down. “At the top of the farm they’ll put the basket on a little pulley system which brings it down about halfway, and then they’ll need to carry it either on their shoulders or on mules down to ground level,” describes Massarella. “It’s not really used anywhere else but the Amalfi Coast.”

The steepness of Amalfi, famous for its fragrant sfusato Amalfitano lemons used for everything from flavoring fish to making limoncello, has made it impossible to adopt modern techniques. “They can’t expand or mechanize their cultivation or harvesting systems in these places, so they encapsulate traditions and ways of life that haven’t changed much over the centuries,” says Helena Attlee, author of The Land Where Lemons Grow: The Story of Italy and Its Citrus Fruit. “When a small, traditional citrus farm goes, it takes a whole raft of skills with it, and a way of life that can never be repeated.”

That’s what inspired Massarella to start the Citrus Archive in the first place, and as she visits more farms, the fragility of Italian citrus-growing traditions becomes clearer. Modern farms can mass-produce citrus, and sell for cheap. “The majority of people would rather pay a little bit less because they don’t really know where it’s coming from,” she says of supermarket citrus. “They don’t know the history of it, and to most people a lemon is a lemon.”

She hopes that the Citrus Archive helps change that, by making people aware of the history of citrus culture before these techniques disappear. When she’s done with her tour of citrus farms across Italy, she hopes to turn her project into a book, inspired by the sumptuous Ferrari volume she saw at the museum. She sees it as a continuation of Hesperides, “in the sense that it’s today’s techniques,” she says. But she’ll illustrate the richness of Italy’s citrus tradition with photographs, instead of copper plate etchings.

Plus the turducken of beers.
monks

This elusive treat lives up to its nickname.
food

The Quest to Reacquaint Japan With Its Forgotten Native Citrus

Once revered by royals and celebrated by poets, the tachibana is now endangered.
List

A popular legend claims that the famous pizza was invented at a restaurant in this alley.
Want to see fewer ads? Become a Member.
From Around the Web
Atlas Obscura Trips
From Chocolate to Truffles: Italian Culinary Adventures
View This Trip
Thanks for sharing!