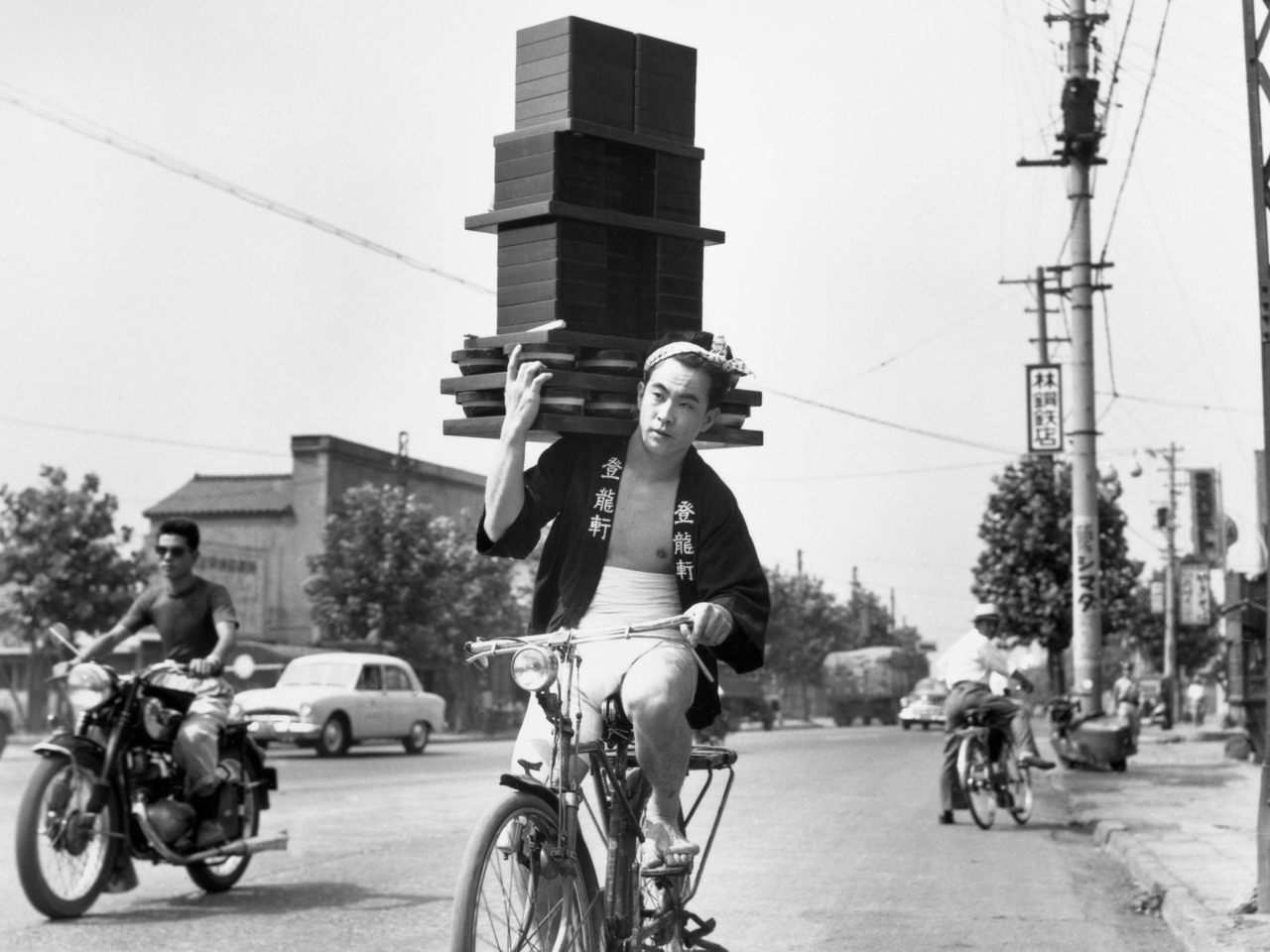 During the Edo Period, when the Tokugawa Shogunate ruled Japan, Edo, the capital and what is now modern-day Tokyo, grew to be the most populous metropolis on the planet, with an estimated 1 million inhabitants. When societies industrialize, food systems have to adapt. Enter the demae, or delivery men, who braved the streets of Edo balancing towers of dozens of piping hot meals on their shoulders to feed the hungry masses.

“Basically, you had a lot of urban density and an extremely developed capitalist economy,” says Nick Kapur, an associate professor of history of Japan and East Asia and the author of Japan at the Crossroads: Conflict and Compromise After Anpo. “People had commutes, much like today. They would walk across the city, so they didn’t have time to go back for lunch. A whole restaurant industry evolved to serve these workers.”

Cheap, filling, and nutritious, soba and udon noodles were the preferred foodstuff of the proletariat. A skilled demae could carry dozens of packed soba lunches at once. “Bicycles hadn’t been invented yet, so they would carry these soba trays and bowls in baskets that were hanging down from a pole that they would carry on their shoulders,” Kapur says. “These guys were fast. They would jog through the streets to get the food where it was going while it was still hot.”

When bicycles did come into the picture around the turn of the century, they revolutionized the industry. By that time, Tokyo was sprawling, so there was more ground for demae to cover. “You want the noodles to still be hot when you arrive, so speed is of the essence,” says Kapur. “In a lot of cases, they would be carrying lunch to one entire company, so that’s why they’re carrying maybe 20 or 30 portions together.”

The skills of these wheeled delivery heroes are so legendary that locals in Tokyo still attempt to replicate their acrobatic feats to this day. By the mid-century, the sight of a demae patiently weaving around cars while balancing a Jenga tower of meticulously stacked lunchboxes was commonplace. Demae rode with one hand on the handlebars and perhaps a cigarette dangling from their mouths, unflapped by gravity or pedestrians.

Yet while the demae were schlepping noodles in the 1950s, another force was on the rise on Tokyo’s roads. Honda Sōichirō and other pioneers built a booming automotive industry. As more and more of Japan’s growing middle class began driving cars, Tokyo became far less hospitable to cyclists—particularly ones with precarious stacks of soba in tow. “In the 1950s, there started to be a lot more accidents with these guys,” Kapur says.

In 1961, the authorities stepped in—sort of. The government officially banned the use of delivery bikes, yet demae carried on, skirting the law, and the local police did little to stop them. “To ride on a bicycle with piles of ‘soba’ bowls on your shoulder is dangerous,” the Metropolitan Police Department’s Traffic Section officials stated, according to a Reuters report. “It must be prohibited from the viewpoint of road traffic safety. But we will not place any stricter curb as they will lose more than half their customers.”

In the same year, Honda ramped up production of the Super Cub, a motor scooter with a 50 cc engine that could be operated with one hand while navigating congested streets. The Super Cub had already been around for three years, but it became a runaway success thanks in large part to an ad campaign targeting the soba delivery men. Tsugio Ogata, one of the graphic designers behind the project, later recalled, “In the final stages of the Super Cub’s development, Mr. Honda told Mr. Fujisawa, ‘This is a bike that a soba noodle delivery man can ride with one hand and a stack of noodle trays balanced on his shoulder.’”

The campaign featured a fictional boy who journeys from the countryside to sling soba in the big city. In it, he raves to his mother that his Honda Super Cub is fast enough to keep the noodles from getting soggy. The slogan “Soba-mo genki-da, Okkasan!” (“The soba is good too, mom!”) took off, and, almost overnight, Honda received more than 4,000 orders for Super Cubs from soba-noodle shops and other restaurants. Sixty years later, the Super Cub is one of the top selling motorized vehicles of all time, with more than 100 million sold.

Nowadays, food delivery men and women are still essential to keeping Tokyo’s workforce fueled, but they no longer balance boxes of soba on one shoulder. Instead, they rely on a contraption called a demae-ki, a platformed pendulum that keeps everything from ramen to pizza upright as the motorbike driver braves traffic.