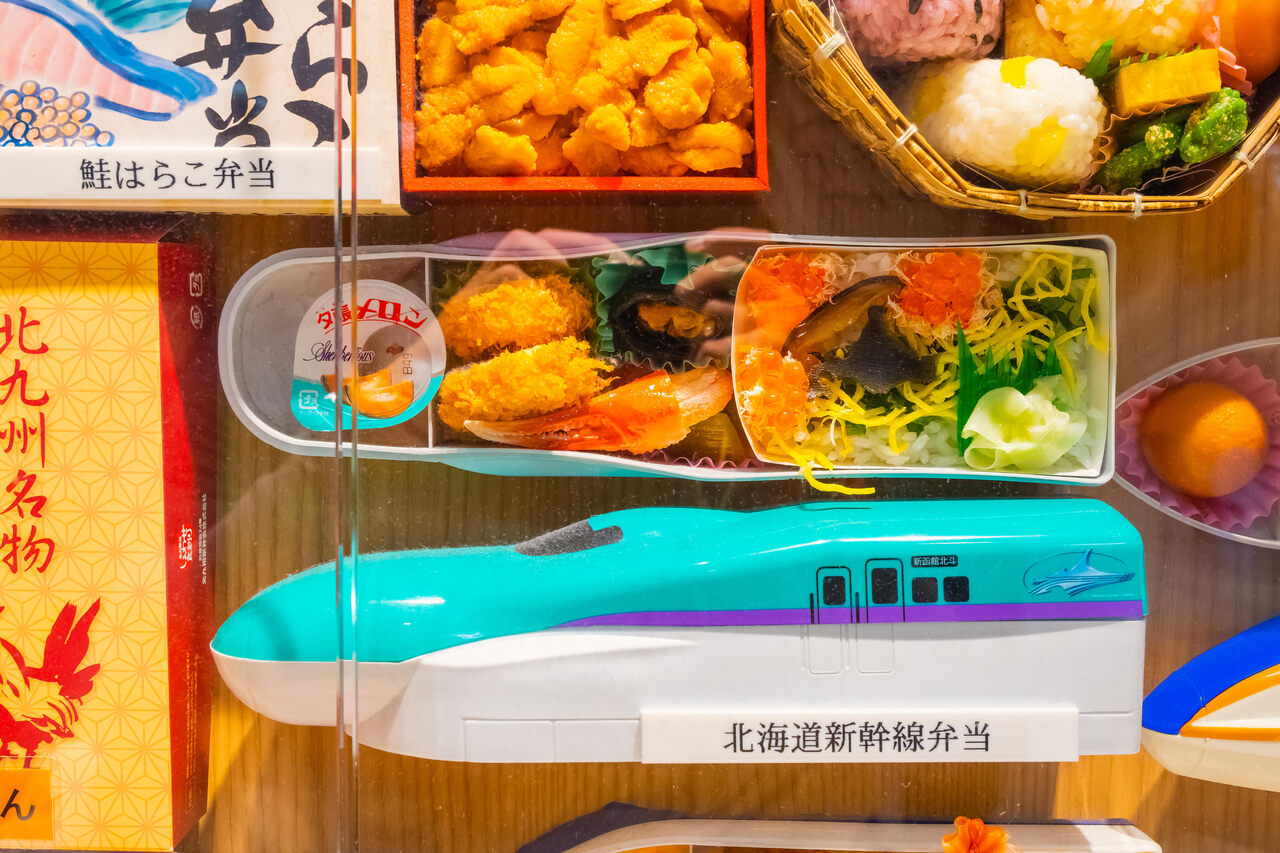 The Tōkaidō Shinkansen, Japan’s famous bullet-train line, flashes past futuristic skyscrapers, Shinto shrines, and lush paddy fields on its 180-miles-per-hour dash from Tokyo to Osaka. This time-defying bolt is vanquished only by the majesty of placid, cloud-cloaked Mt. Fuji, the brief sight of which makes time stand still for a serene, spectacular moment. To commemorate this sight, which occurs around 45 minutes after leaving Tokyo, many passengers unwrap boxes of food bought at station kiosks or from train attendants.

Called ekiben, a portmanteau combining eki (the Japanese word for “station”) and ben (short for bento, or boxed meal), these boxed meals are as numerous as the country’s train stations. Coming from Tokyo, one might dig into the cosmopolitan capital’s diverse offerings: fried chicken, shrimp tempura, macaroni salad, salmon onigiri (rice balls), steamed carrots shaped like flowers, and a bite of cake, all served in a bento modeled after the shinkansen. Passengers coming from Osaka might choose takoyaki, the city’s famous fried octopus dumplings, or takomusu, a takoyaki and musubi (rice ball) combo.

Ekiben is a bite-size representation of Japan’s food culture, portioned out in compartments of beautifully designed bentos that resemble gift boxes. Most contain pieces of chicken, cubes of breaded or grilled fish, tempura, an omelette, and a vegetable assortment of pickled daikon or seaweed arranged around balls of rice with a sprinkling of black sesame or nori. From this basic template (known as makunouchi, meaning “between act” and harkening to the bento served during intermission at kabuki and Noh shows in the Edo period), ekiben expands to include regionally specific novelties. At Hokkaido, for instance, this might mean celebrating the island’s cherished Pacific flying squid. Hokkaido’s Mori Station offers ikameshi (squid stuffed with a nub of rice and cooked in a special sauce), a dish that became famous during the Second World War when rice was scarce.

Ekiben has been part of Japanese rail travel almost since workers laid the earliest tracks. The first Japanese rail line, from Tokyo to Yokohama, began service in 1872. By 1885, records note, vendors were selling rice balls stuffed with pickled plums in bamboo leaf wrappers at Utsunomiya Station. By the turn of the century, a rapidly expanding rail network was matched in pace by the appearance of ekiben stalls selling boxes of local delicacies: tai meshi (sea bream rice) at Shizuoka station, ayu (fresh river trout) sushi at Yamakita. Initially, vendors peddled ekiben out of trays, coming right up to the train window to eager customers. With the advent of air-conditioned coaches, the call of the ekiben vendor has all but disappeared. Now passengers make a steady canter to ekiben stalls on the station platform during scheduled train stops—a feat that requires speed and hustle. Fortunately, train attendants also sell ekiben from pushcarts.

It’s not just the food—ekiben’s beautiful packaging also evokes the region where it was made. In Hyōgo Prefecture, known for the traditional practice of catching octopus in a takotsubo, an earthen pot designed specifically for cephalopod nabbing, the hipparidako meshi ekiben is a rice, octopus, conger eel, and vegetables dish served in a miniature takotsubo. In Okayama, the most popular ekiben references Momotarō, or peach boy, a local folkloric hero thought to have emerged out of a peach. The bento is shaped like a peach and the wrapper features an artistic rendition of Momotarō. Each ekiben box is a souvenir, and travelers often bring famous regional ekiben home as gifts.

Ekiben is equally popular among Japanese and foreign tourists. Fans have their own ekiben wrapper collections; devotees can enjoy ekiben magazines and comic strips; and the official vendor of the Japanese rail pass (similar to the Eurail pass) has tips on how best to enjoy ekiben on their website.

A fast food prepared slowly, with local, seasonal ingredients, and consumed while meditatively pondering passing landscapes, ekiben is a cultural artifact, an invitation to take a slice of Japan’s culinary bounty as a flavorful memento of the pleasures of exploration.

When the Sun Is High, Dung Beetles Navigate With the Wind

How a White Lie Gave Japan KFC for Christmas

One cunning business maneuver created a tradition and saved a franchise.
food

These convenient, compact meals have a devoted fanbase.
railroads

Over the last 50 years, Amtrak has seen many designs come and go.
Video