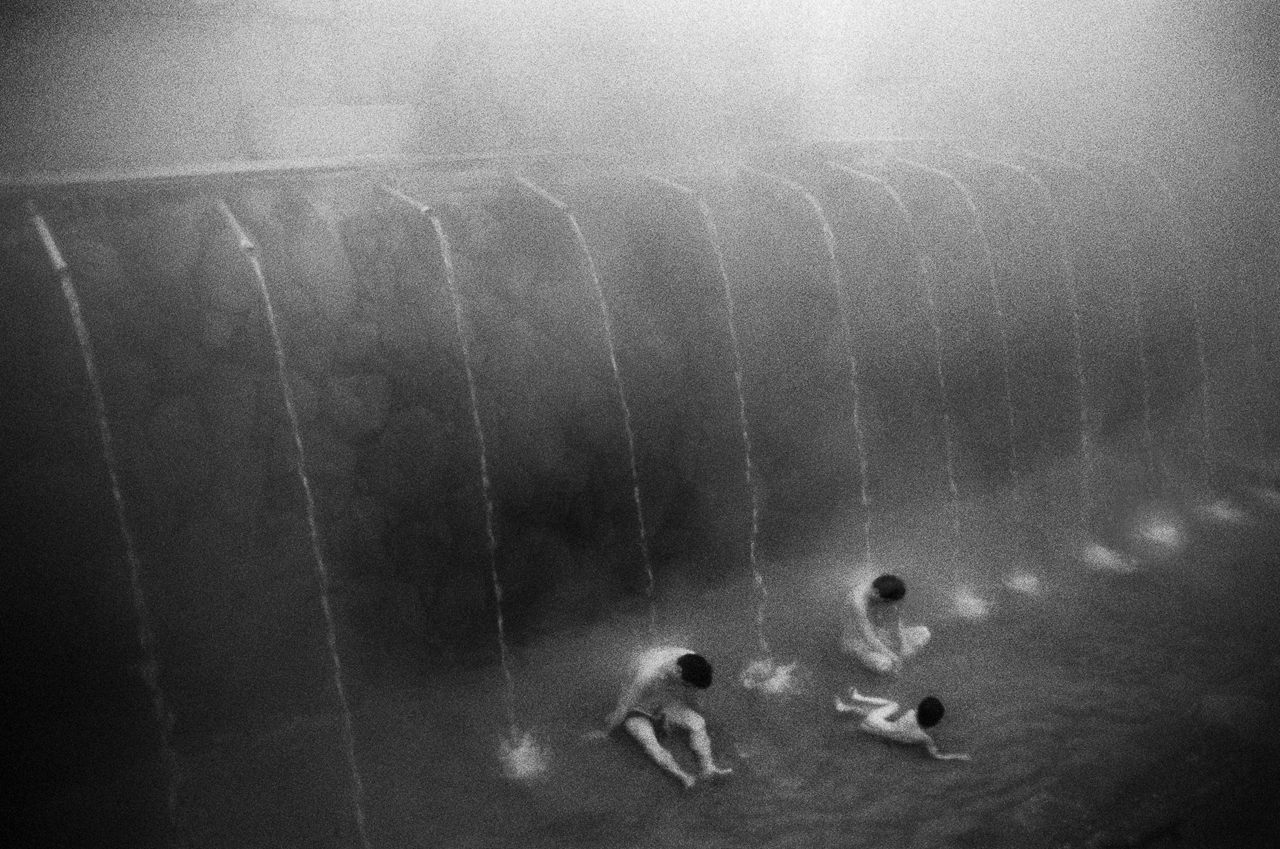 In Beppu, Ōita Prefecture, a chart provided by the management of Hyotan Onsen suggests various body positions one can assume for optimal therapeutic benefit. All photos by Mark Edward Harris

Clouds of mist billow around three relaxed nude bodies, as cascades of water pour over them from pipes. A figure, submerged in a large pool with puffs of rising steam, gazes at scenery through a window. A woman is seated on a stone by water, outside in a snowscape, a thin haze around her. These are photographs of people hanging out in onsens—Japan’s natural hot springs. Stripping for a soak in such a thermal bath is a long-standing tradition in the country, and is known for its therapeutic effects. A Japanese text from almost 1,300 years ago describes how aches, pains, and skin problems could be cured by “the water of the gods.”

When shooting onsens, steam is key for award-winning travel and documentary photographer Mark Edward Harris. “I often shoot more toward in winter because the steam from the hot water mixing with the cool air definitely helps create the surreal feeling in the images,” he says. Japanese winters also lend themselves to another tranquil onsen practice the photographer recommends: “There’s something called yukimi, yuki meaning snow and mi to see, and so you do snow gazing from the baths. You can also do yukimizake, which means snow gazing while drinking sake … which is really good.”

With or without the sake, onsens remain an important part of Japanese culture today, with well-established rules of etiquette, such as no soap, swimsuits, or large towels. The country boasts more than 20,000 geothermally heated springs, and hence thousands of onsens, so the variety of onsen experiences, Harris says, is “neverending.” And he should know—he’s been shooting these incredibly relaxing spots for 30 years, and intends to keep going.

For Harris, there’s a spiritual aspect to dipping into these mineral-laden pools. “It’s for bathing the soul, not the body,” he says. And that connection comes through in the third edition of his photo book The Way of the Japanese Bath.

Atlas Obscura spoke with Harris about the variety of onsens and how simple parts of the project were their own reward.

How did you first encounter onsens, and what inspired you to photograph them?

Back in 1992, I went to Beppu with a friend. She exposed me to this surreal world, which I had no clue existed. Fortuitously she had suggested Beppu, which, if you were to pick one city that’s completely immersed in the hot spring tradition, Beppu is it, on the southern Japanese island of Kyushu. I shot some of the hot springs there, including one that has a takiyu, which is basically a cascade onsen where the water comes out of pipes from a relatively high altitude. If you position your body so that it hits you on the shoulders or your back, it’s extremely therapeutic, but it’s also extremely photogenic.

Bathers are nude in your photos. How did you get your subjects to participate in the photos?

Some of the women in the images are friends of mine, but I’m just letting them do their own thing. As the late, great photographer Mary Ellen Mark told me, “You can never do better than reality.” When I was on the men’s side, I’m this gaijin with a camera but I’m in the bath, too, and I’m just holding what’s called a tenugui, which is a small towel. I just have one camera and one lens, but still—”Who’s this gaijin showing up?” But because I can speak Japanese fairly decently, I would just say what I’m doing and I’d ask, “Do you mind if I shoot a photo?” and then people would almost always say, “Yeah, that’s fine.”

Did you discover anything surprising while you worked on this project?

The amazing thing is just the variety of different bathing opportunities. So many have incredible scenic views. You could see Mt. Fuji in the distance, or you could be bathing in a place like Lamp no Yado Aoni Onsen in Aomori Prefecture in midwinter, or one of my favorites, Takaragawa in Gunma Prefecture at any time of the year, surrounded by beautiful mountain scenes. You could be sitting in the middle of a snowstorm and just gazing at the snow, or in Ginzan Onsen in Yamagata Prefecture, which has an amazing view of the surrounding forest as well. Then you can retire from the bath to your room in a ryokan, a Japanese-style inn, and that’s the perfect combination.

Tell us about your favorite part of the project from a personal perspective.

Very recently I shot a couple of images for the latest edition of my book at Kita Onsen Ryokan in Tochigi Prefecture, where many of the scenes for the Japanese comedy Thermae Romae were filmed. I wanted to make a pilgrimage there because I love the movie. The film picked this particular ryokan and the baths there for a reason: It is a historic ryokan with lots of different types of bathing experiences. One bath has a tengu, which looks like a big devil, hanging on a wall, overseeing the bathers. Then there’s the konyoku, which is mixed bathing—a huge bath outside, and then private family baths. Also it’s a very, very traditional ryokan that’s off the beaten path. There’s just so many reasons to make that one of my top experiences.

What was the biggest challenge in this project?

I’m shooting in a sort of raw-as-possible way. Not just me—being naked with just a tenugui—but also with one camera, one lens. I actually find it very liberating. With so many other projects, like with the orangutans in Borneo, I have to be prepared for them being up close and also way in the distance, so I’m carrying everything from a 20mm to a 500mm lens with me and two camera bodies in a ThinkTank backpack. Having shot in Iraq, Iran, North Korea, jungles around the world from Brazil to Borneo, hiking the Everest trek on a Nepal earthquake recovery project for Vanity Fair, and another one for them on the tsunami recovery in Japan—I feel pretty spoiled every time I get to literally sink myself into this ongoing project. I fell in love with the hot spring experience in Beppu almost three decades ago and that feeling has never left me.

"Finally, I could have zero-gravity hair!"
hot springs

The Annual Journey of a Giant Miso Soup Bowl

Every September in Yamanaka-Onsen, the owan-mikoshi gets a lift around town.
volcanoes

A photographer captured water's ability to carve out new paths in all their fractal glory.
Video • PinDrop

1:18
Want to see fewer ads? Become a Member.
From Around the Web
Atlas Obscura Trips
Artisans & Exiles: Exploring the Hidden Traditions of Japan’s Sado Island
View This Trip
Thanks for sharing!