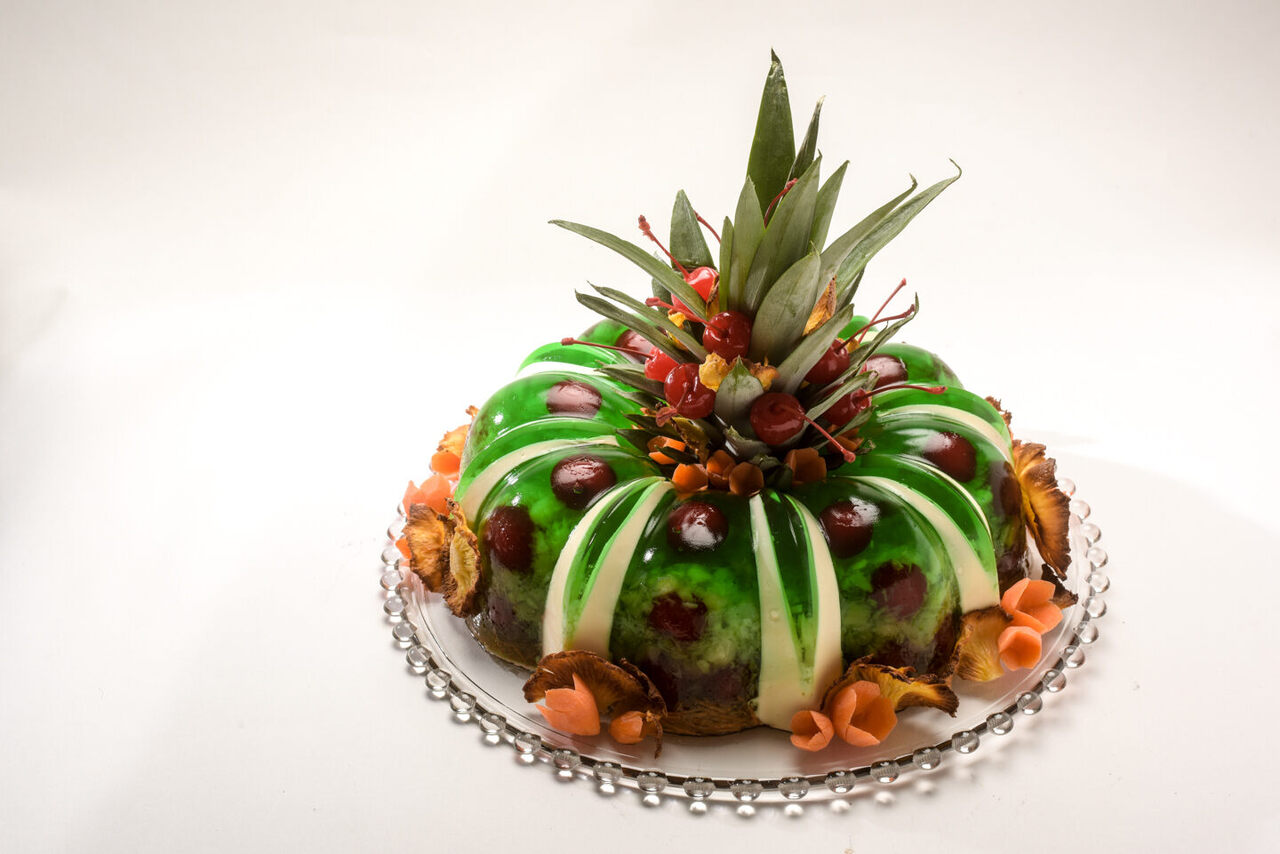 “Nothing Says I Love You Like Green Jell-O” by chef Justin K. Dillree. All photos courtesy Kate Medley

“It started as a joke,” says Emily Wallace, “and then we were like, ‘Actually, that’s not a bad idea.’”

The idea was a pop-up event celebrating the art of sculpted foods, particularly gelatin foods in all their elaborate, multi-colored glory. (Whether they be savory aspics or fruit-filled Jell-Os.) The name, chosen by Emily with her friends Kate Elia and Kate Medley, was “O Moldy Night,” a riff on the iconic Christmas carol “O Holy Night” referring to the many molds used to shape Jell-O and aspics. So one night in Durham, North Carolina, home cooks and professional chefs displayed their creative concoctions in a hotel lobby. Beyond Jell-O, most anything made with a mold was welcome.

The three main organizers, Medley, Wallace, and Elia, work as artists and professionals in the local culinary scene and have an interest in blurring the line between art and food.

“Molded foods are so visually stunning and weird,” says Medley, a photographer and filmmaker. “Why not elevate them on a pedestal?”

Wallace and Medley both grew up surrounded by Southern home cooking and have fond memories of the molds of their youth: orange Jell-O salads, accompanied by cool-whip and mandarin oranges.

“It’s not Southern by nature, but it shows up pretty strong in the South,” says Wallace.

But “O Moldy Night” contained molds far more elaborate than anything from Wallace or Medley’s youth. Many of the molds were savory, which is a departure from the average Southern Jell-O concoction. One home cook, Lauren Hart, suspended pieces of fried chicken in a sweet tea mold and finished off the display with mashed potato florets.

“That took it to a new level for me,” says Wallace of that particular mold. “I wish I had grown up with that.”

Even though some may associate Jell-O with Southern cooking, it is not connected with a particular region. When powdered gelatin packets first became widely available in the early 1900s, it was embraced by home cooks all over the country.

“Anybody could do it,” says culinary historian Laura Shapiro, “It was not expensive, it was easy, and it was festive and flamboyant. And it was sweet. Everything that the American palate and imagination wanted.”

At the museum, every mold was superlative in one way or another. But the organizers doled out “Shimmy awards” as extra praise, and each award was associated with its own special pun. The “Out With the Mold, in With the New” award for most contemporary mold went to a Totoro-shaped creation, which depicts a beloved character from a Hayao Miyazaki children’s film. And the “My Jell-O Americans” people’s choice award went to a haunting mold that depicts the painting “Ophelia.” (In this case, Ophelia was drowning in aspic.)

Over 400 people showed up for the event to celebrate art, food, and some truly unique Jell-O. At the end of the night, the molds were cut up and devoured.

Jell-O is nostalgic. It’s weird. It jiggles. It’s a food commonly associated with childhood or grandma’s dinner table. It’s also a medium of artistic potential, which can contort into infinite combinations of form, substance and flavor.

Remnants of communist leisure in the shadow of war.
jellofood artvisualfood

Celebrate family and good fortune with these simple goldfish.
food

One baker treats tahdig as a blank canvas.
food