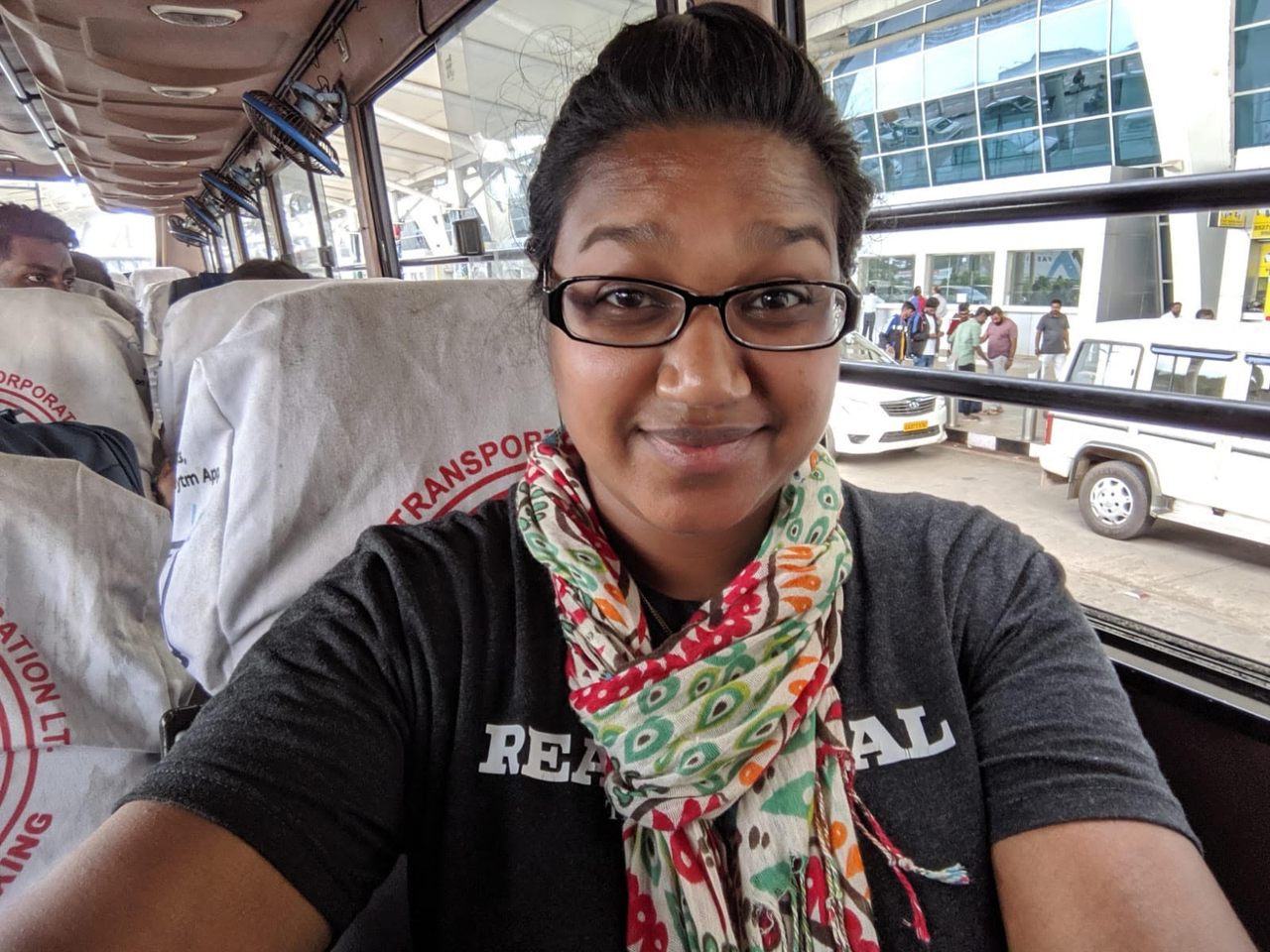 On the bus to Panjim, in Goa. Courtesy Jenn Smith
In This Story
Destination Guide

Since late August, Jenn Smith has been traveling across India as the winner of Atlas Obscura’s First Journey prize. When she was a baby, Smith was adopted by a loving U.S. family from an orphanage in Kolkata. Now 37, she’d long wanted to visit her birth country, but had never had the means or opportunity to make the trip—until now. You can read more about Jenn’s personal story, and how Atlas Obscura came to choose her as our $15,000 prize winner, here.

Recently I caught up with Jenn now that she’s more than halfway through her 10-week journey, which she’s organized around attending cultural festivals, in locations all over the country. A lightly edited transcript of our conversation follows.

This trip is the culmination of years of dreaming on your part. Tell me about how you were feeling as you headed to the airport here in the U.S., and eventually boarded the plane and took off.

Leaving my family was more emotional than I had expected. My grandmother, aunt, and mom all got up early on Sunday to drive me to the Wassaic train station so I could head to New York City for the India Day Parade before my Monday flight. As they waved and blew kisses through the window as my train was leaving, I couldn’t help but tear up. I know they were all worried because they love me so much.

My friend Jill, who lives in Philadelphia, met me in New York for the parade. It was nice to be with her and my awesome Airbnb host Sharon before I left. Experiencing a taste of India before I left was a really nice reminder of the community of people, religions, languages, and music that make up the diaspora.

I had a short Uber drive to the airport on that Monday morning. I felt both elated and a bit nervous, almost wondering whether this was the right time to be doing this trip. I questioned whether I was really ready and prepared for a 10-week journey. I teared up a little during takeoff, but then decided to just let it all go. No turning back.

What were some of your first impressions once you landed? On your drive into Delhi from the airport?

Wow. I did it. I’m actually here. Then nerves because I couldn’t reach Ram, my driver for nearly an hour because of WiFi issues. But then we found each other, and I was so grateful for his patience. He brought me cool water, a bright smile, flowers, and great conversation. I felt both at ease in his company and in wonder at the industrial chaos that is Delhi.

For your first few nights in Delhi you stayed with a host family, and I remember you telling me that you hoped that arrangement would help make the beginning of your trip a little less intimidating. What did you learn from your host family?

Yes I opted for a homestay in Hauz Khas and was grateful to have a huge room, a garden terrace in the tree tops, and warm hosts. I found breakfast and dinner with good company here and eventually ventured out on my own into the neighborhood.

Murad, one of my hosts, shared his great history book with me, 80 Questions to Understand India, which gave me a lot to think on regarding the development and shifts in India as a country, as a people, as a culture.

Tannie, my other host, who was recovering from a surgery from a few weeks prior, is a lovely and progressive conversationalist, so we talked about everything from society to sex and her decisions to not have children.

We talked about food and my identity, and how, if I didn’t speak too much, I could pass for a local Indian and not pay tourist prices. A lot of hosts I’ve stayed with so far encouraged me to embrace this ability and pass as much as possible. Because they have mixed heritage, I think I learned from Murad and Tannie how to both question and embrace it all.

I know you were a bit nervous before you left about how you might be received by locals in India, particularly because you look Indian but didn’t grow up in an Indian family. How are you feeling about that now that you’ve been there for a few weeks? What has your experience with locals been like so far?

I’ve opened up more with each new homestay and location. Every morning and evening, my new Indian friends and family are checking in on me: Where are you? Did you take lunch? Are you having fun?

After Delhi I went to Villa Khatun in Panjim, Goa, and quickly bonded with my host, Alim, a young father and businessman, who loves his home but doesn’t much subscribe to a particular religion, despite being surrounded by devotees and temples.

In Ribandar, I fell in love with the host family and loved seeing Leo, the dad and Kenzie, a daughter, play music together. Jacqueline, the mom, is an amazing baker. I’m sad I didn’t have the time to spend in the kitchen with her. I also began meeting other travelers here, swapping ideas, stories, perspectives and recommendations.

One traveler, Andre, joined me for my wander to Divar Island for Bonderam. There, we met Neves, who I was going to book a stay with, but he didn’t get back to me in time. Instead, without ever asking for a dollar, Neves picked us up from the ferry, drove us to his amazing property, and made us tea and a walking map for the island. Later we all laughed and danced together with Neves’s friends and neighbors during the Bonderam afterparty, with live bands and fireworks.

In Jaipur, my host family was so welcoming that my two-night stay became a week. I learned to almost master the art of using a squat toilet (definitely peed on my own sandals the first time) and Indian shower (bucket, dipper, hose). I ate dinner on the floor with between nine and 12 people daily. The last nights, as new couch surfers arrived, I slept on the floor in a room with three family members. I felt at home completely.

In Kerala, so far, my experiences have included warmth and love and incredible people. I’ve never been so happy! It’s like one big hug, especially with the folks we met in Alappuzha. Jo, Nachi, and their daughter Leila are now my Kerala family. We also formed a tight bond with people we met in a neighboring hostel and restaurant.

What’s something you’ve encountered so far that surprised you, or that didn’t end up being what you thought it would be?

Pulikali was something I had really been looking forward to, this dance tradition translating to “tiger play.” The body painting itself is indeed a feat. The event, I left with mixed feelings. It’s expensive for teams to participate. Last year there were 18 teams with 25 to 50 dancers each. This year, only six teams participated. It’s also a very drunken and crowded event, it’s hard to see the dancers. I went up to a press area and introduced myself to the only female broadcast reporter I saw.

But as I made my way back to my friends, I got caught up in a crush of people trying to photograph the dancers. Mostly hundreds of men. My bum got groped uncomfortably hard by many hands until I yelled and swiped. I almost lost my shoes. Thankfully my genitals were spared from being violated, but it could have been bad. Later, from the safety of a barrier and friends, I saw three floats featuring women. One depicted the harsh treatment of women, a mannequin hung by her neck from a rope. A young live model sat on a scale, with a giant stack of rupees on the other side of the scale outweighing her worth as a girl. I think I was the only one who clapped for their boldness. After my experience in the crowd, this float resonated all the more so.

You organized the bulk of this trip so that you could attend a large number of cultural festivals. Which festivals have you made it to thus far? What sticks out in your mind?

So far I’ve been to Bonderam, Ganesha/Ganpati, the Pune Festival of culture, Onam, and Raksha Bandan. Each one has been memorable in its own way. I loved learning about Ganpati, from the intimacy of celebrating and worshipping at home to the large-scale pandals with light and sound shows.

To me, festivals now resonate as best being a shared, happy time spent with family and friends, in great and in small ways.

So hard to choose! But the Onam Sadhya meal on a banana leaf at Pishody’s in Thrissur is one experience that stands out in my mind. We, a group of random travelers, ate ravenously, and the food never stopped being served until the last of us folded their banana leaf.

What are you most excited to do, or see, next?

Right now I’m sitting on the front patio of a homestay in Kumily, watching street dogs and wild monkeys walk by. We’re on the edge of Periyar National Park, and I’m hoping to catch a glimpse of wild elephants, tigers, and birds, oh my!

"That context, that deeper understanding, it stays with you."
atlas obscura

"The most important experience of my life in terms of shaping who I am."
caves

Patterns in 1,000-year-old stalagmite formation connect the fall of empires, kingdoms, and industries to long and deadly dry periods.
royalty

From musket-wielding empress Nur Jahan to writer Gulbadan Begum, meet the influential women of the early-modern Muslim empire.
Want to see fewer ads? Become a Member.
From Around the Web
Atlas Obscura Trips
India: Desert Festivals of Rajasthan
View This Trip
Thanks for sharing!