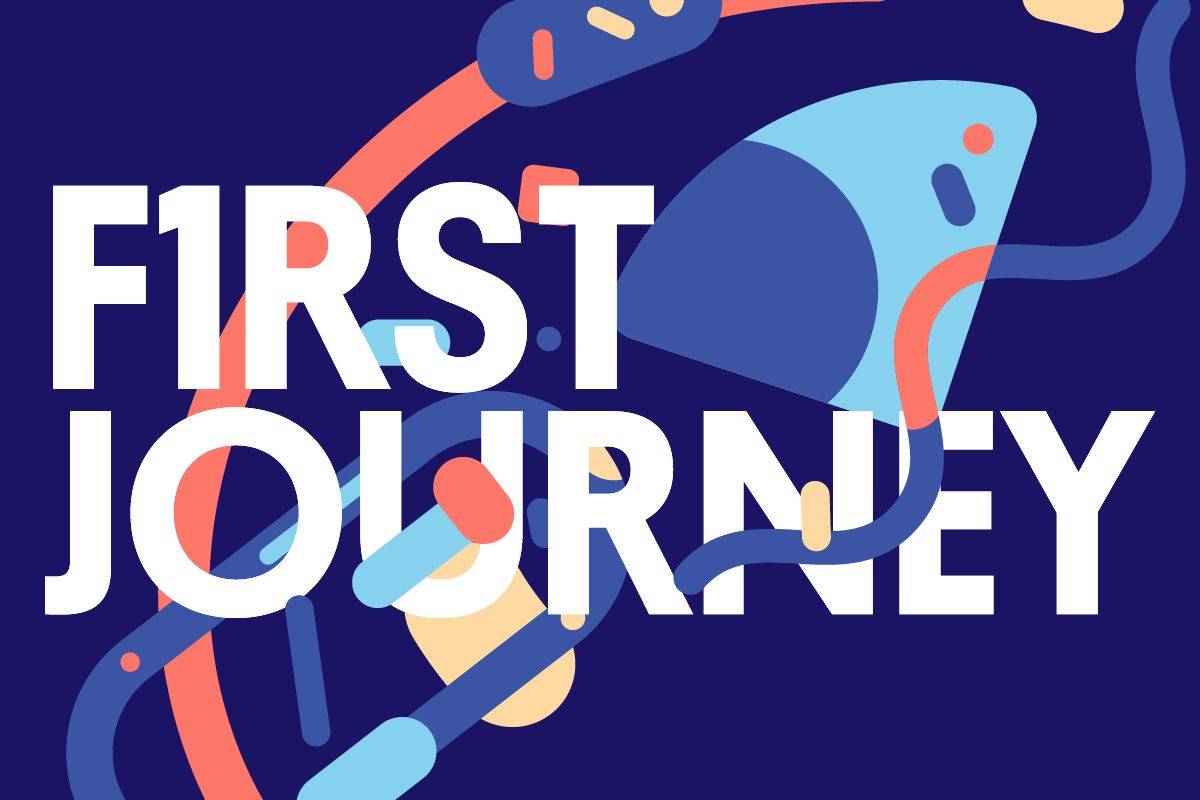 Last week, Atlas Obscura announced the five finalists for First Journey, the competition we launched earlier this year to send one of our readers on their first real journey. The idea was inspired by our co-founders, Dylan Thuras and Josh Foer, who both went on transformative journeys of their own when they were younger. This year being Atlas Obscura’s 10th anniversary, we decided to celebrate by giving someone out there—a person with an amazing idea who just needed the means to pull it off—$15,000 to take a meaningful, life-changing trip.

Thousands applied, and our panel of judges spent weeks narrowing down an incredibly impressive field of applicants to just a handful of finalists. Each of the four runners-up is being awarded $500, which we hope will serve as seed money toward making their journeys a reality.

And now, at last, we couldn’t be more thrilled to announce that the winner of First Journey—who receives $15,000, logistical support, and will be featured on Atlas Obscura—is… Jenn Smith of North Adams, Massachusetts!

Growing up in Western Massachusetts, Smith had a classic 1980s American kid’s bedroom, with a few twists. The walls were pink and bordered with unicorn wallpaper. The My Little Ponies were kept in a small suitcase. The Archie and Batman comics were plentiful. And on one wall was a poster, scooped up at a yard sale, of the Taj Mahal. It coordinated nicely with the globe she received as a gift during elementary school. On that globe, right on the spot marking Kolkata, India, was a hand-drawn star.

Smith was born in an orphanage in Kolkata and has no memories of her birthplace. She was adopted at a young age by a loving U.S. family of Irish-Polish-Lithuanian descent, and raised as an only child. Now 37, she’s never traveled back to India, despite long yearning to do so. With her $15,000 prize, she’ll spend three months traveling around India this fall, with plans to participate in up to a dozen different festivals.

“I’m just really excited to be there,” says Smith, “to learn and find the things that I don’t get a chance to read about in books or see on mainstream TV.”

As “a bookworm of a kid,” Smith took any opportunity to immerse herself in information about India. At the children’s library, she gravitated toward the geography section. For social-studies assignments, she’d write about Indian elephants. In middle school she made a valiant attempt to cook puri, a fried, unleavened Indian bread, at home. With no deep fryer in the house, she improvised with oil in a soup pot, but the oil wasn’t hot enough and the flour wasn’t right. She ended up with “small, slightly puffy fried dough balls” and a kitchen that reeked of burned vegetable oil.

In college at Syracuse University, Smith took a South Asian studies course and met some Indian students. Talking to those who grew up in Indian families brought forth some thorny issues about identity—namely, says Smith, “feeling fraudulent about it. I have this identity, but I wasn’t raised or taught in this culture. So how Indian am I, really?”

In her First Journey application, Smith wrote that she “worked multiple jobs during the school year and throughout the summer” to be able to afford college, and was never able to study abroad or save up for the trip to India she so badly wanted to take. Working multiple jobs turns out to be a bit of a theme in Smith’s life—she currently has two, one as a community engagement editor and reporter at the local newspaper, the Berkshire Eagle, and another at Tunnel City Coffee, a coffee shop and bakery in Williamstown, Massachusetts. Smith is grateful that both of her employers have agreed to let her take time off to go on her journey, and says she’s relieved that she’ll be able to “set people up for success to fill in for me while I’m gone.”

Both of Smith’s jobs require her to be relatively outgoing, but during her journey, she does wonder how she’ll manage without being able to speak Hindi or Bengali, the latter being the most commonly spoken language in Kolkata. On her trip, “I’ll blend in, I’m sure, in facial appearance, but if I open my mouth I’m clearly not from India.” That feeling of not fitting in and potentially being judged for it is something she’s a little nervous about. But such worries also provide an opportunity for self-reflection, against the backdrop of India’s caste-system legacy. After a lifetime of absorbing information about her birth country from across the world, Smith is ready to immerse herself in it.

“I think the biggest thing I’m craving is context,” she says. “Tangible, first-hand, visceral sensory context. I’m sure I have my own notions and even unconscious biases, but I don’t want to feed into that. I really want to let India, let this culture, let all these festivals I’m hoping to take part in speak for themselves.”

“All these festivals” means a dozen in 90 days, all over the country. It’s an ambitious itinerary, and one that promises an explosion of sights, sounds, and flavors: “The best food, the best, most beautiful flowers, the most traditional songs.” Festivals are amazing because, says Smith, “you try to have your best attitude, put away your differences, and just get along with people to have a good day. Or in the case of Indian culture, a good, like, eight days.”

One standout festival on her itinerary: Ganesh Chaturthi, a birthday celebration for the elephant-headed Hindu god. The week-and-a-half-long commemoration ends with a procession of clay Ganesh idols toward a body of water. These idols, which have been crafted by artisans, are then immersed in the lake, river, or sea. “There’s something I kind of dig about creating something for hours, making something so beautiful, and then just lowering it into the ocean,” says Smith.

By attending festivals like these, Smith hopes to experience—and share with Atlas Obscura readers—a version of India that goes beyond stereotypes, simplifications, and fear-based reports of the country. When you think of the common perceptions of India, she says, “you think of terrorism, or sex trafficking abuses; pollution.” Or yoga retreats. “I just know that there’s so much more to the country. And that’s something that I want to experience for myself, but I also want to share with others.”

Smith took a similar approach when she went on a reporting exchange to Pakistan in 2014. The very idea of that trip made her mother, Cheryl, cry, but Smith was determined to see aspects of the country that go under-reported in the U.S. media. “That was my big thing,” she says. “What people can I meet that will prove my theory that this country is so much more than how it’s been typecast?”

Despite being right next door, Smith still didn’t make it to India. When she finally gets there this fall, she expects she’ll continue to seek out untold stories—and her mom will continue to worry about her. But that’s just a reflection of how close-knit their family is, and how encouraging they have been toward their daughter. “I’ve known a lot of adoptees, and some adoptees are not ever told about where they came from or their past,” she says. “But my adoptive family was so supportive in letting me know that I came from a different country than the one I lived in.”

Other major supporters: friends, particularly the “amazing” Ed, a kayak engineer and Jenn, a puppeteer and Smith’s best friend in high school. Mutually obsessed with the 1993 martial arts film Only the Strong, the teenage Jenns would “pretend to capoeira each other in the hallway.” In 2014, Smith officiated Jenn and Ed’s wedding. And a couple of years ago for Smith’s birthday, Jenn and Ed gave her a card and some seed money for a very specific purpose: that trip to India she’d always been talking about. It was “a vote of confidence” that made Smith even more determined to go. She wrote in her journal that she would like to make the trip before age 38. In August, aged 37 years and five months, she’ll arrive in Delhi.

Smith’s itinerary has her traveling from Delhi down to the west coast, to Goa and Kerala. Then she’ll head northeast to Kolkata, where she’ll finally see the birthplace she’s spent so much time imagining. “I have this Google Earth image of the address where I was born,” she says. “Just being able to stand there for a moment, just be there? I’m really looking forward to experiencing that.”

On the Road in India With Atlas Obscura's First Journey Winner

Jenn Smith shares what it's been like so far to finally visit the country where she was born.
first journey

We’ve been inspired by each of their proposals, and we think you will be, too.
atlas obscura

"That context, that deeper understanding, it stays with you."
atlas obscura

"The most important experience of my life in terms of shaping who I am."
Want to see fewer ads? Become a Member.
From Around the Web
THE GASTRO OBSCURA BOOK
Taste the World!
An eye-opening journey through the history, culture, and places of the culinary world. Order Now