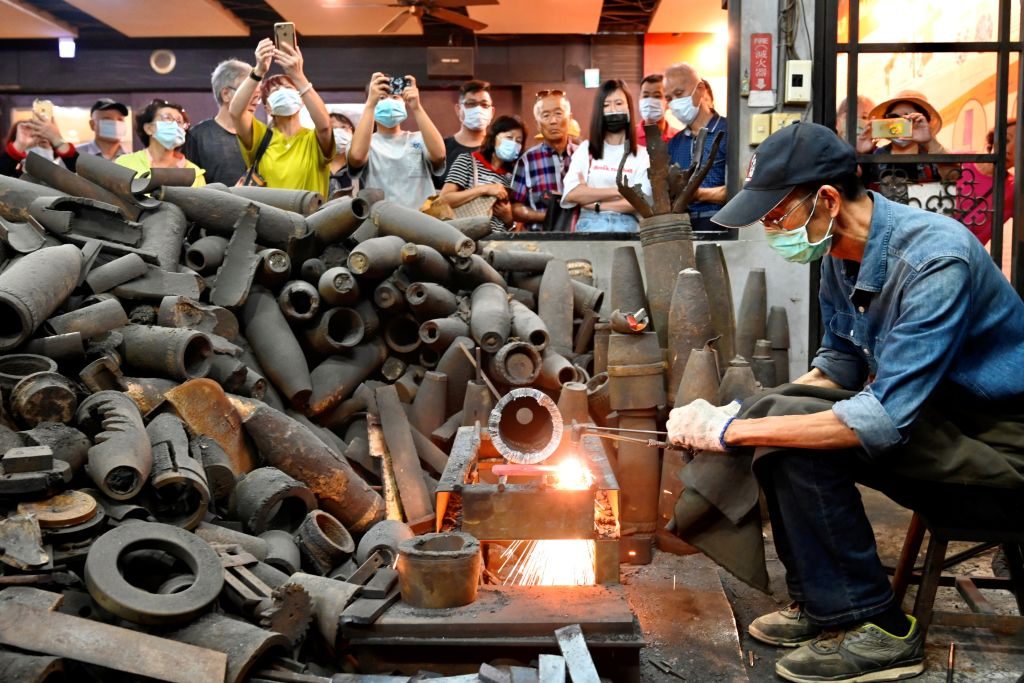 Both Wu Tseng-dong's knives and his forge have become a tourist draw. Sam Yeh/Getty Images
In This Story
Destination Guide

For the first 20 years of his life, Wu Tseng-dong lived in a war zone. Growing up on Kinmen Island, a small Taiwanese territory four miles off the coast of mainland China, bombs were a constant threat. “It was terrifying. We were always panic-stricken,” Wu says. “We had to scout out places to hide when the bombs dropped. A big tree is good because it can block the impact, but the best place to hide was inside a gutter.”

For much of the 20th century, Kinmen was a battleground. A Cold War flashpoint between the People’s Republic of China and the Republic of China, or Taiwan, the People’s Liberation Army shelled the tiny island of Kinmen repeatedly. Beginning on August 23, 1958, when Wu was barely a year old, roughly 479,500 bombs were dropped by mainland China on Kinmen over the span of 44 days, an event later called the 1958 Taiwan Strait Crisis. “The only time they stopped bombing was during meal times,” Wu says, noting how his mother would seize those moments of quiet to run out of their bunker and into the fields to harvest sweet potatoes to eat before the shelling resumed.

The intensity of the bombing eventually abated, though the mainland continued to bombard Kinmen every other day until 1978. “Some of those bombs would explode into many pieces,” Wu says, holding up a piece of shrapnel from an old artillery shell. “Back then we didn’t have machines to cut the bomb into little pieces, so we would collect these fragmented pieces and make knives with them.”

Wu is the third-generation blacksmith behind his family’s eponymous brand, Maestro Wu. At his forge in Jinning Township, Kinmen, he specializes in making knives out of the same artillery shells that rained on his family for two whole decades. “Bomb steel is really good quality. The better quality bombs are, the more damage it can inflict,” he says.

Making art out of warfare debris is nothing new. Craftspeople in Europe repurposed bombshell casings from the First World War into decorative vases, tobacco jars, and jewelry. But the bombshell knives of Kinmen were born out of necessity. Kinmen was a tiny island with a hostile neighbor within swimming distance. Sourcing materials from across the Strait was out of the question, so tools had to be forged locally.

Luckily, steel literally fell from the sky. “Kinmen was an agricultural society, so our livelihood was tied to ironware,” Wu says. To supply the island with tools and help support his family, Wu was inducted into the family blacksmithing business at age 10. He used to take commissions for nearly anything that could be fashioned out of metal, including door hinges, machetes, farm plows, and of course, kitchen cleavers. In Chinese culture, the cleaver isn’t just a knife. It’s the most important tool in a kitchen—a multi-purpose, all-in-one gadget that can be used to shred vegetables, chop bones, or mince meat.

The family had started making tools out of bombshells as early as World War II, with Wu’s grandfather collecting scrap from bombs dropped by the U.S. and Allied Air Forces. Throughout the Cold War, locals sold bombshells to the family for a few cents each. As a child, Wu started off as an assistant blacksmith, manually operating the grinding wheel as his father shaped each knife. Back then, there were no power tools, so the grinding wheel—which shapes and polishes the knives—had to be painstakingly powered by hand.

Eventually, Wu was put in charge of shaping the knives. “My dad would make the knives and wait for me to come home from school to grind them,” he says. It was a task assigned to all seven of his siblings, but Wu ended up inheriting the business. Customers tended to buy the knives that he had made. “And so I had no choice but to enter this profession,” he says.

Wu now has a team of eight master blacksmiths working underneath him and a collection of power tools at his disposal. But for the sake of this story, he makes me a knife from scratch. He starts off by knocking out a chunk of steel from an artillery shell, and softens the metal in a furnace at a temperature that can go as high as 1652°F. He quietly shuffles between tasks—polishing, grinding, melting, sharpening—until the ashy black chunk of steel is transformed into a bright silver sword. Lastly, he tests out its sharpness, using the knife to deftly slice a strip off a page of newspaper, which the keen blade accomplishes without tearing or crumpling the flimsy material.

The entire process takes less than 20 minutes. “I can make it faster, but I slowed down so you can take pictures,” he says sheepishly, showing off the final product, a traditional hunting knife used by the indigenous Taiwanese people. “It’s multi-purpose. It can be used to cut vegetables and meat, and to hunt wild game.”

His knives have a durability and strength sought-after by chefs, since the steel in artillery bombs is denser than regular steel. But Wu holds an encyclopedia of blades in his head, from cleavers to swords. It helped that many of the 100,000 soldiers stationed in Kinmen during the Cold War had roots in different Chinese provinces. “Every province in China has a differently shaped knife. Shanghai has Shanghainese knives and Guangdong has their own knives,” Wu explains. Often, soldiers wanted bombshell knives as souvenirs to take back to Taiwan once their Kinmen service was over. The Wu family thus embarked on a lucrative business making custom kitchen knives, basing them on the descriptions and sketches their military clients could muster up from memory.

Five decades from when he first started blacksmithing, Wu is still capable of crafting 80 knives in a workday. While the cost of a single shell has risen to around 30 U.S. dollars, his supply has yet to be depleted. He’s used up most of the shrapnel by now, but there are still intact artillery shells all over the island, hidden deep underground after their explosive landings. They’re often unearthed during construction work for a new road or house. Given that a bombshell can yield 10 to 60 knives, depending on its size, Wu isn’t running out of steel anytime soon.

Today, Maestro Wu knives have become one of Kinmen’s most iconic products. That a weapon can be transformed into a tool used by cooks on both sides of the Taiwan Strait is remarkable, but for many buyers, the past is the point. “There’s a certain level of romanticization to it,” says J.J. Zhang, an assistant professor at Nanyang Technological University in Singapore who has researched Kinmen’s tourism industry. He notes that many tourists from both China and Taiwan visit Kinmen because they are curious about the island’s past as a battlefield. “Different places will use different strategies to capture the imagination of the tourists,” he continues. “In Kinmen, the Kinmen knife has been effective in achieving that.”

Wu, on the other hand, is pragmatic about the historical significance of his knives. Bombs are his medium of choice simply because they were once the cheapest and most plentiful source of steel available.

These days, traditional knife-making is a fading art. But Wu has stayed true to his craft for over half a century. Although he could easily retire and work passively as a spokesperson for the brand, he prefers the familiarity of his forge. “I’m not just a boss. As long as the customer likes my knife, it is my responsibility to make it well,” he says.

It is mesmerizing to watch Wu fly through his studio, his eyes fixated on his steel while sparks shoot in all directions. He doesn’t flinch when fire hits his exposed wrists. “My skin is like leather. The sparks are like sesame seeds flying off,” he says. “I’m used to it.” Of course a bit of heat doesn’t bother him. After all, he grew up amidst a rain of bombs.

What Does the Title 'Esquire' Mean, Anyway?

Their culinary legacies, written on scraps of paper or fabric, tell stories of hope and resistance.
islands

Dutch colonists committed genocide to secure a spice monopoly. But there's more to the story.
disasters

How do you feed eight billion people during a nuclear winter?
Video • Gastro Obscura