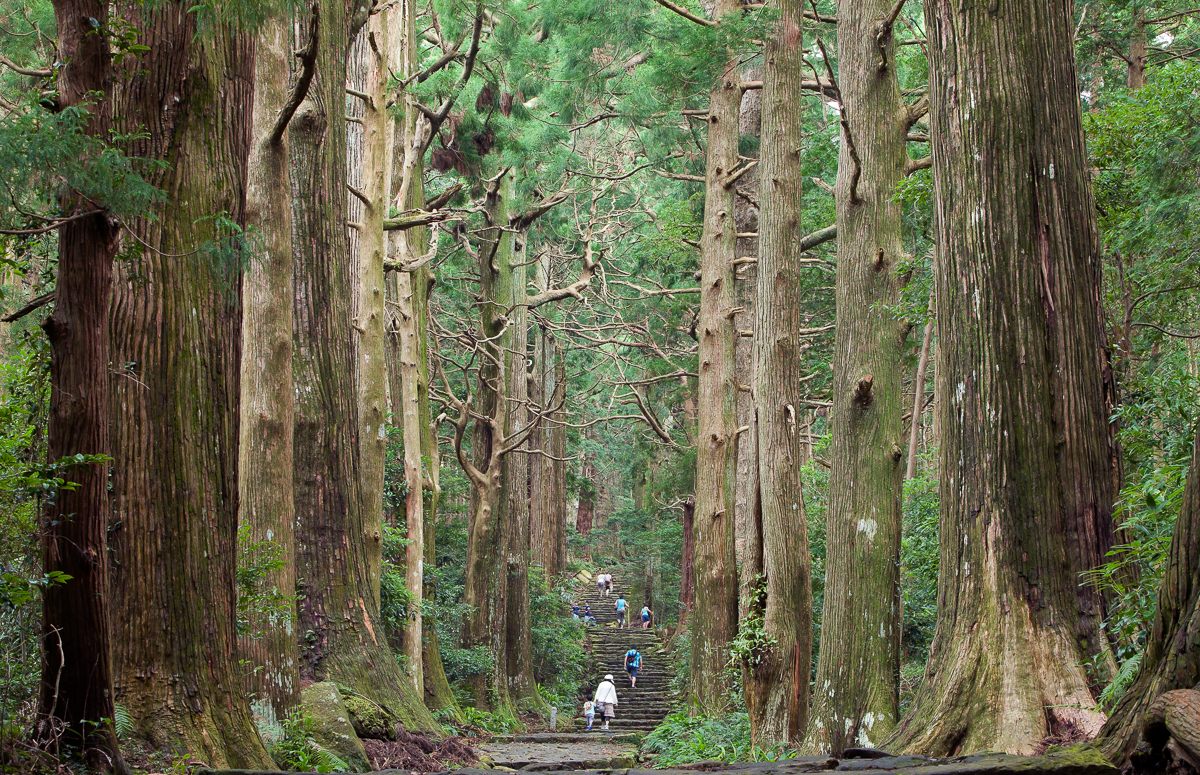 An ancient pilgrimage trail winds through the mountains of Japan’s Kii Peninsula, a densely forested region south of Osaka and Kyoto. It is the Kumano Kodo, a sacred passage of immense natural beauty that has been in use since the 10th century and yet is remote enough that it stays off the beaten path.

That is one of the reasons the trek feels otherworldly—you might walk through the woods for an entire day without seeing another person. It is a stark contrast from the crowds of tourists hiking Mount Fuji, nearly 300 miles away.

It’s impossible to forget the Shinto origins of this route when every couple hundred yards is another crumbling stone deity or Oji shrine. From moss-covered stones forming makeshift stairs on the mountainside to wooden bridges smooth with decades of use, not much has changed on the trail. There are early recorded visits to this region by Emperor Uda (907) and Emperor Kazan (986 and 987) but the Kumano Kodo pilgrimage became more broadly popular in the 11th century.

In 2004, this region was registered as a UNESCO World Heritage site, becoming one of only two pilgrimage trails in the world to earn that distinction. Spain’s Camino de Santiago is the other.

The Nachi Taisha Grand Shrine epitomizes Kumano’s distinct synthesis of nature and temple. Long before the shrine was constructed, this area was already considered holy because pilgrims came to worship at Nachi Falls, one of Japan’s most famous waterfalls. The Grand Shrine and Seiganto-ji, a three-story red pagoda, were subsequently built to give these pilgrims houses of worship.

According to UNESCO, the Three Grand Shrines and Seiganto-ji were such a mecca for worshippers in the 11th century that the pilgrimages became referred to as “ant processions.”

Now the shrines themselves are accessible by bus, which allows more tourists to come and pray at the holy sites without having to take part in the trek through the mountains. With steep inclines, long stretches of trail without a place to rest, and venomous snakes, it is not a hike for the faint-hearted. In his pilgrimage diary in 1201, Japanese poet Fujiwara no Teika wrote about one particularly challenging pass, “This route is very rough and difficult; it is impossible to describe precisely how tough it is.” The path remains largely unaltered over the years but hikers now come more prepared.

Most people you’d see on the Kumano trail today wear sturdy hiking boots and lightweight daypacks. Early pilgrims did the arduous trek in crude wooden or straw sandals and kimonos. Many perished on the journey and along the trail are countless Jizo statues dedicated to those who died on the pilgrimage. Guidebooks for today’s travelers, like the one by Oku Japan, which operates guided tours on the Kumano Kodo, will often mention the role that the Jizo statues play now—protecting hikers from evil, fatigue-inducing spirits of past pilgrims who died on the trail.

These beacons are broken, and yet it's now possible to see what they once would have looked like.
pilgrimagesunescovisualphotography

A small town in Rwanda was home to visions in the 1980s that, in retrospect, portended the violence to come.
culture

A satellite captures the stunning effects of heavy rain and high winds on a landscape that—coincidentally—is used to calibrate satellites.
Want to see fewer ads? Become a Member.
From Around the Web
THE GASTRO OBSCURA BOOK
Taste the World!
An eye-opening journey through the history, culture, and places of the culinary world. Order Now