Famous Landmarks, Before They Were Finished - Atlas Obscura
Want to see fewer ads? Become a Member. 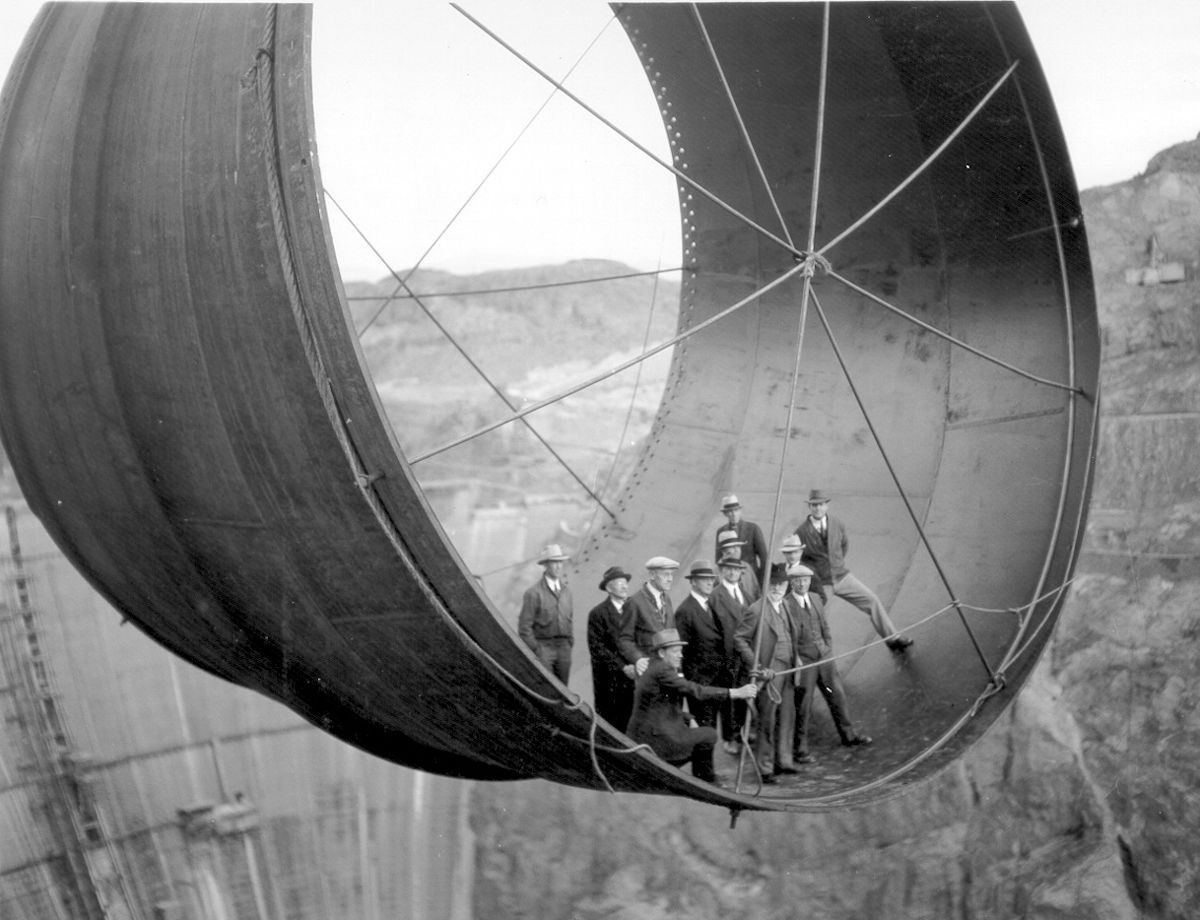 Members of the Boulder City Consulting Board and other officials standing in a section of pipe over the Hoover Dam, 1935. Bureau of Reclamation/Public Domain

If you ever find yourself traveling by boat along New York City’s East River, stand out on deck as you pass under the Manhattan Bridge. For a fleeting moment, as you look up, you can glimpse the underbelly of the great landmark. From here, it takes on a new dimension: vast beams of steel cross and overlap, appearing like a metal runway stretching across the sky. But as soon as you emerge from its shadow, it reverts to its usual form, an elegant suspension bridge amid the city’s towering skyline.

It isn’t always possible to find an unusual perspective on famous landmarks, but photos taken during their construction can often provide one. In black-and-white or grainy color, they’re filled with promise but not yet substance—scaffolding around a skyscraper skeleton, pieces of a sculpture in a workshop, the foot of a tower reaching into nothing.

The construction of great landmarks is often thought of in terms of statistics—how high, how big, how wide—or hyperbole: the tallest, the longest, the most amount of concrete. But there’s always more to the story than just figures. Many landmarks are built under clouds of controversy. In February 1887, just after construction began on the Eiffel Tower, a group of artists and writers published a letter in Le Temps newspaper, “Protest Against the Tower of Monsieur Eiffel,” proclaiming their distaste for what they called a “stupefying folly.” A more humorously cutting criticism came from the French writer Léon Bloy, who called the tower a “truly tragic street lamp.”

There’s also often a human cost. At the time that some of these landmarks were built, safety standards could be lackluster. Workers on the Sydney Harbor Bridge would frequently hitch a ride up onto the structure with the crane hook, which was known as “riding the hook.” In fact, there were often no harnesses or handrails. During the nearly 9 years it took to build, 16 men lost their lives.

Not all landmarks need to be visible, monumental structures. The London Underground is an icon, yet it hides underneath the city’s more prominent, and often more ancient, landmarks, its presence only betrayed by the instantly recognizable red and blue logo that pops out from entrances and exits. A photo of its construction shows a team of workers, standing on piles of rubble, forging a tunnel through the earth. And some landmarks are considerably more recent: it’s hard to picture Hong Kong’s vista of skyscrapers without the Bank of China tower, which opened in 1990.

Once completed, landmarks dominate a landscape, but as these photos show, it can be even more interesting to see present-day icons when they were still taking shape.

Trawling Through the Murky World of Microplastics

In waterways around the globe, the teeny tiny shreds are a big problem.
landmarks weekvisualphotography

Striking work by photographer Richard Mosse shows how merging art and technology can cut through dry data.
Want to see fewer ads? Become a Member.
From Around the Web
THE GASTRO OBSCURA BOOK
Taste the World!
An eye-opening journey through the history, culture, and places of the culinary world. Order Now