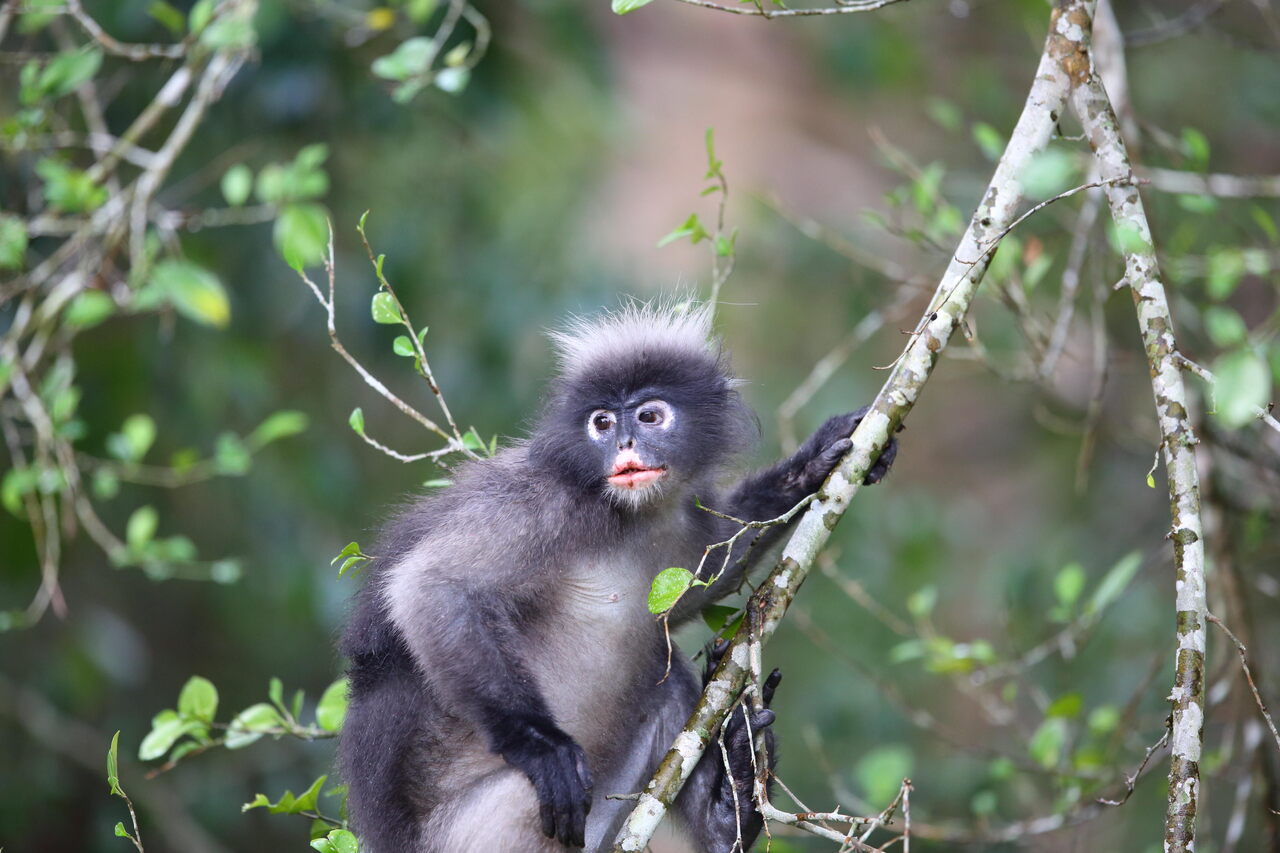 The endangered langurs need a hand—and, in Teluk Bahang, a bridge made from fire hoses. Nobuo Matsumura/Alamy Stock Photo
In This Story
Destination Guide

In the lush jungle of Malaysia’s Penang Island, a primate makes its way through the forest’s canopy. A layer of fog sits among the trees and the humid smell of damp soil—mixed with excrement near the primates’ recent locations—lingers, while the sounds of cicadas, birds, and other forest animals reverberate. “It’s always noisy in the forest,” says researcher Jieh Long Koh, project executive for Langur Project Penang (LPP).

The endangered dusky langur (Trachypithecus obscurus) reaches out to grasp a narrow line in the trees, deftly moving its 15-pound body across a busy street in Teluk Bahang via Malaysia’s first urban canopy bridge. The langur’s face is dotted with white latex from the sticky fruit of the Terap Nasi (Artocarpus elasticus), and when it reaches the other side, it disappears into the patch of forest in search of earleaf acacia, wild cherry, bird nest fern, Chinese violet, Ceylon cinnamon, blue pea flower, an assortment of figs, and other plants to eat.

Penang Island is one of the most densely populated areas in the world, with 1,663 people per square kilometer, and population numbers are expected to rise exponentially by 2035. The busy road the langur crossed in Teluk Bahang is one of the island’s vital arteries. Like the roadways, the arboreal route that helped the creature safely traverse the street and journey from one patch of habitat to another was human-made. It was fashioned from recycled fire hoses—part of Langur Project Penang’s work to help animals including the dusky langur. To drivers zooming by 40 feet below, the animals’ dark fur, with light-colored patches around its eyes and mouth, appears as little more than a speck.

Jo Leen Yap is LPP’s founder and director, and a PhD student at Universiti Sains Malaysia. She began focusing on dusky langurs about five years ago, when she noticed many were spending time close to the road, often climbing across on electrical wires and sometimes perishing from electrocution, collisions with vehicles, or falls. She began the LPP citizen science group as a simple Facebook page, but word quickly spread, and more people became involved with the canopy bridge project as well as other research and environmental education work.

She sees the canopy bridge as part of a broader effort to help people and wildlife live in harmony. “We really hope that the canopy bridge is not just to connect the fragments in a large area or even for the roads and highways, but also a conservation tool [to] reduce human-primate conflict,” Yap says. “The ultimate goal is to bridge the gap between humans and urban wildlife.”

The canopy bridge in Teluk Bahang is dubbed “Ah Lai’s Crossing” in honor of an alpha male langur researchers studied there. It’s crafted from retired fire hoses from the Fire and Rescue Department of Malaysia (known as Bomba) given to collaborators at APE (Animal Project & Environmental Education) Malaysia. Other materials, such as bamboo and nylon, were also considered, but the designers opted for fire hoses because they hold up even in rain and monsoons. An engineer tested them to make sure they’d be reliable, performing a tensile strength test on unused portions of fire hose as well as used, twisted portions that were kept in conditions similar to those at the bridge site.

The bridge spans the 40-foot-wide road with a few extra feet on each side. One end is affixed 40 feet up in a tree—which an arborist confirmed was healthy and stable—while the other end is attached to a steel pole on the other side. A camera on the pole keeps a watchful eye. “The fire hose itself can withstand a lot of weight as long as we check it regularly,” Yap says, noting that she inspects it every time she visits to collect SD cards. The team plans to conduct tests at least once a year to ensure the fire hose and tree stay strong and to analyze how fast the hose materials degrade in the environment.

The original design—a single rope of twisted fire hose—was installed in February 2019. Just four days later, a long-tailed macaque was the first animal recorded crossing. The arboreal animals were used to traversing the road in other ways (such as by trees, cable wires, or the road), so it took them a bit to warm up to the new alternative. But they soon figured it out.

Between March 2019 and August 2020, the camera trap captured a total of 779 animals—mainly plantain squirrels and long-tailed macaques—crossing the bridge. While the shyer dusky langurs rested and fed nearby, they weren’t as keen to use the original crossing.

In August 2020, LPP reinforced the bridge. Now, it consists of two parallel ropes of twisted firehose—one installed a few feet higher than the other—connected by additional ropes, creating a structure resembling a horizontal ladder spanning the roadway. Dusky langurs are now seen using the modified crossing more frequently, though LPP is still crunching the numbers.

The Penang Island canopy bridge project is just one of many wildlife crossing structures around the world, including Banff National Park’s famous overpasses and underpasses for ungulates, bears, and other large animals. Adam Ford, assistant professor of wildlife restoration ecology at University of British Columbia, says before these were installed, there were many collisions between wildlife—particularly elk—and vehicles in the park. “They called it the meat grinder—it was bad for people, bad for animals,” Ford says. Combined with fencing, these structures have drastically reduced collisions in the park.

Different species have distinct structure preferences. Grizzly bears and wolves seem to like overpasses, while cougars prefer underpasses. Even different age classes and sexes of animals have varying preferences. “It can be quite nuanced,” Ford says. Other types of crossings around the world include culverts for small mammals, aquatic designs for fish and amphibians, aerial bridges for gibbons, and even power poles for sugar gliders in Australia.

“I think the main message is there is no real ‘one size fits all’ solution for getting animals across the road,” Ford says. “The best way to design a crossing structure is to try to think about what in ecology we call the life history needs, the species-specific needs, the types of locomotion they have.” He says ideally crossings would “mimic the types of structures that animals would interact with in a more natural setting—that’s the key.” Langurs naturally use tree branches to make their way through the forest, so the human-built structure allows them to make similar movements to get across the road. The color of the fire hose also evokes the appearance of a local tree.

Since early 2020, pandemic-related movement-control orders in Malaysia have prevented LPP from conducting some of the fieldwork they planned to study wildlife at potential sites for future crossing structures. Yap’s team hopes to install additional bridges, but they need to observe species movement for at least three months at a potential site, and the locations they’re considering are scattered, including places on the mainland. The team is also looking to incorporate speed bumps and signage to help slow vehicles near crossings.

Each project involves a lengthy process of surveying, tabulating data, gaining necessary approvals and permits, and a multitude of meetings. Yap hopes they can gain approval for their next bridge later this year or next year. She is hopeful their work will help promote human-wildlife harmony while saving animals’ lives, but she emphasizes that protecting the animals’ domain is the ultimate goal. “It doesn’t mean that this is the perfect solution,” Yap says. “The perfect solution is still to safeguard the habitat.”

Walden Pond Is Full of Jellyfish, But Don't Panic

Accidentally released on a Finnish island 30 years ago, the parasites are spreading.
Video