Why Researchers Dressed as Leopards to Scare Some Monkeys - Atlas Obscura
Want to see fewer ads? Become a Member. 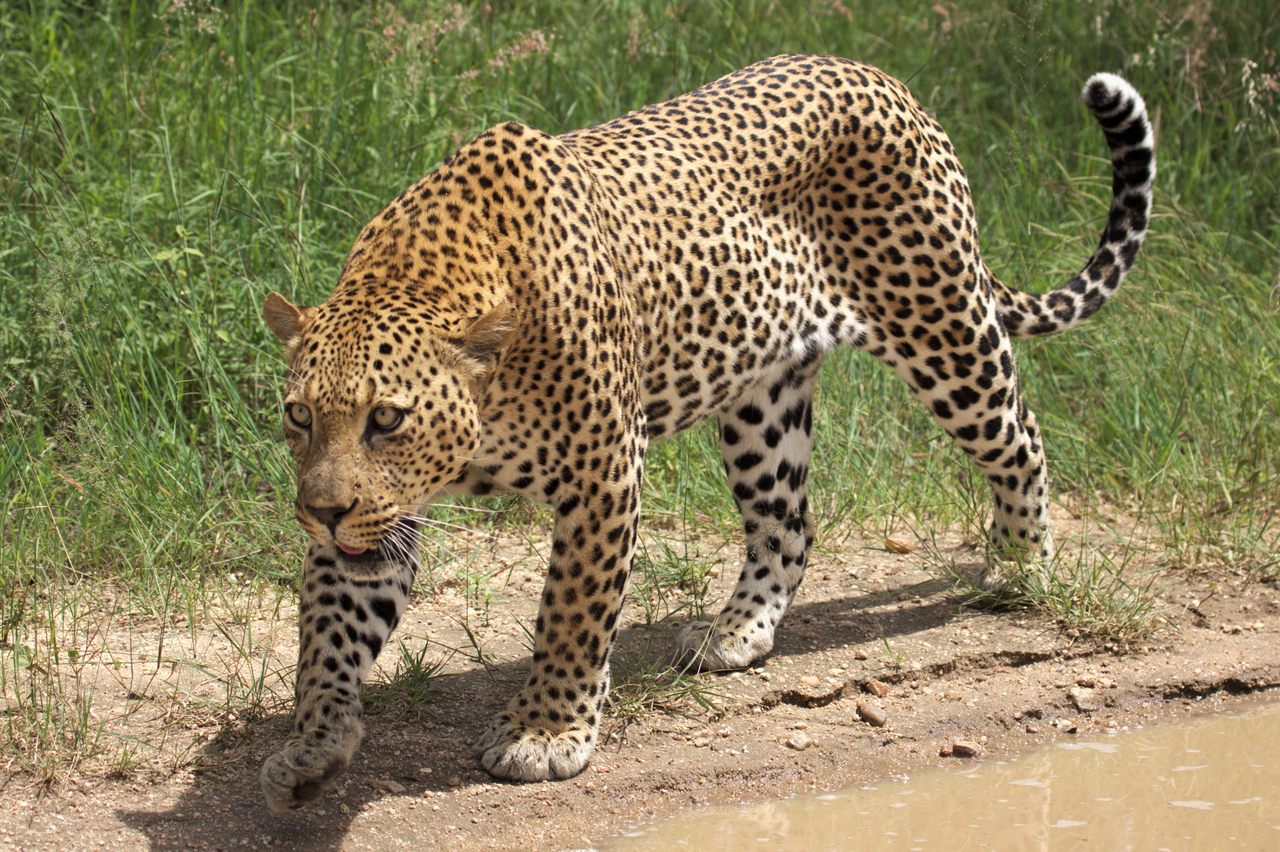 Using an actual leopard (Panthera pardus pardus) like this would have been impossible for the field experiment, so researchers dressed up like one. Derek Keats/Wikimedia
In This Story
Destination Guide

Republic of the Congo

It’s a tricky thing trying to pretend you’re a predator deep in the rainforest in northern Republic of the Congo. “It’s very humid, and sweat bees are all over you,” according to primatologist and conservation scientist Claudia Stephan. “Most of the time you see ahead for just a couple of meters due to dense vegetation,” she adds, via email from a remote site in the region’s Nouabelé-Ndoki National Park.

The difficult work paid off, however. Using an ingenious, if simple, disguise, the team led by Stephan and her Wildlife Conservation Society colleague Frederic Gnepa Mehon, also a primatologist and conservation scientist, uncovered intriguing subtleties in the way that male and female monkeys communicate when danger is near. The findings, published recently in Royal Society Open Science, show that alarm calls are not just about alerting the group to a threat. The female monkeys in the study tried to get the males to take certain actions and the males, in response, basically said “I got this.”

“We were completely struck by the extent to which female and male communication strategies differ in the very same context,” says Stephan. “This raises loads of questions about the function that alarm calls generally serve.”

But staging an experiment like this in the field isn’t easy. Researchers such as Stephan and Mehon usually have limited options for studying how animals in the wild react to a threat. Waiting around, hoping to witness such an encounter naturally is inefficient. Some researchers play recordings of predator calls, which requires a certain credulity on the part of the intended subjects, given that few predators vocalize when actually hunting, for obvious reasons. Setting up a static model of a predator requires guessing the path that your quarry will take, and, even then, the unblinking stare or stiff posture of a fake leopard might not impress savvy animals such as the putty-nosed monkeys (Cercopithecus nictitans) of western Africa.

So, to learn more about the putty-nosed monkey’s alarm calls, the researchers had to get creative. Stephan says the team opted for the most naturalistic disguise they could field-design: A team member covered himself in store-bought leopard-print fabric. While others observed, the low-tech leopard surrogate crept through the dense vegetation, inching toward a group of the monkeys. That’s when things got interesting.

In multiple trials over six months, involving 19 different groups of putty-nosed monkeys, the female adults responded to the faux leopard with an all-purpose alarm call known as a “chirp,” intended to attract the attention of the male of the group. “Female putty-nosed monkeys use their males as ‘hired guns’ for predation defense,” Stephan says. “They do so by emitting alarm calls that do not contain any information about ongoing events, requiring males to come and to see what’s going on.”

The team also recorded examples of the two previously documented alarm calls made by male putty-nosed monkeys: the “hack,” for an airborne threat such as an eagle, and the “pyow,” for terrestrial threats, including the static leopard models used in those earlier field experiments. But Stephan and Mehon’s team—the first to present a somewhat more realistic, moving model—consistently recorded a third alarm call, never before observed: the “kek.”

The males made the kek sound only after identifying the moving leopard and approaching it to distract the predator. “Once their male approached, females stop alarm calling, take their offspring and hide in the dense vegetation,” Mehon says. “They behave as if they have achieved their goal: They successfully manipulated the male to come and to defend them.”

While taking on a predator alone may not seem like the best survival strategy for the male, putty-nosed monkeys live in groups of one adult male, several females and their offspring, so the male will have already passed along his genes. At that point, survival of the group, rather than the lone male, is the top evolutionary priority.

The findings also call into question how and why sex-based alarm calls evolved. “Our results suggest for the first time that there is a [difference] in alarm function based on the sex of the signaler,” says Stephan.

“This system is, to my knowledge, very unique,” says Melissa Berthet, who studies animal communication at the Jean Nicod Institute in Paris and was not involved in the new research. “In most species, alarm calls are the same for all individuals: They are emitted to inform that a threat is nearby.” Berthet has recorded and analyzed the alarm calls of titi monkeys in Brazil, which vary to indicate the location and type of predator—but not by the sex of the caller. She says the new paper is important for the field because “when investigating the meaning and function of alarm calls, we mostly focus on the external events, such as whether the calls are associated with a level of urgency, which apparently makes us miss a big part of the story.”

Instead, Berthet says, understanding how alarm calls influence behavior of individuals within a group is crucial. Berthet also appreciates the team’s creative use of a leopard stand-in, which avoided some of the difficulties she and other researchers have encountered. She’s found that static models are often quickly recognized by the monkeys as fakes, and that recorded predator sounds yield inconclusive results. “I’m not sure that titi monkeys recognized the calls,” Berthet says.

For Stephan and Mehon’s team, the biggest challenge was not being a leopard, but rather being a leopard in the jungle. The dense rainforest offered a “cacophony of sounds.” The buzz of cicadas, in particular, so dominated many of the team’s recordings that they were unusable. Bigger animals posed bigger problems. Guides from a local Ba’aka community frequently alerted them to forest elephants or gorillas moving through the area, and chimpanzees repeatedly approached the researchers, getting within 50 feet, “curiously observing what the bipedal ape was possibly doing in their territory,” Stephan says.

And then there was the moment when a potential threat was serendipity. Stephan recalls that the team briefly encountered a real leopard before it ran off. “It elicited exactly the same kek calls from the putty-nosed male as those we recorded with our [leopard stand-in],” she says. “An unexpected and very reassuring confirmation of our model choice.”