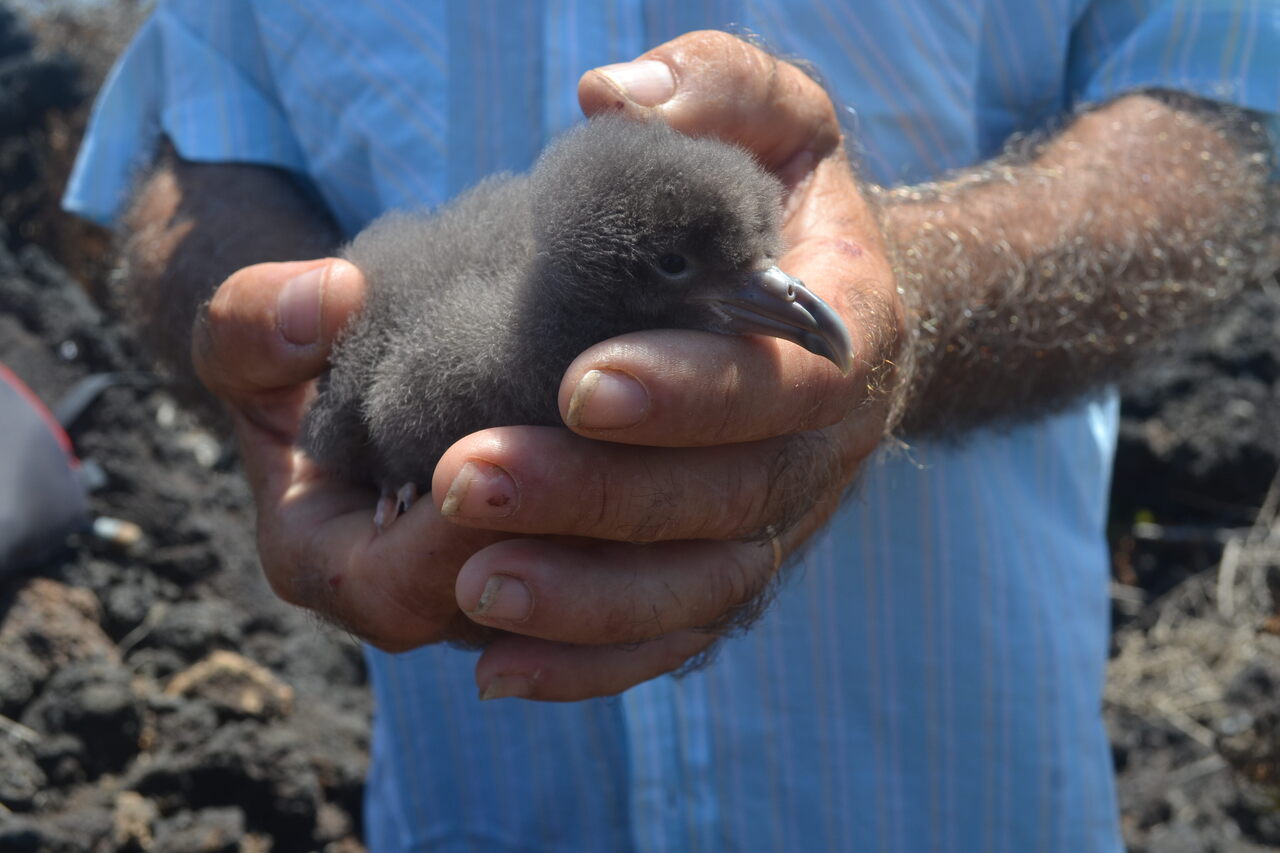 On the Italian island of Linosa, locals who once hunted for seabird eggs now see the animals in a new light. Guia Baggi
In This Story
Destination Guide

Dario D’Emanuele stretches out on his side among black and brittle volcanic rocks. He reaches into the narrow burrow with both arms. In one hand, he holds a small flashlight that catches a glint in the eyes of the seabird watching him warily. In the other hand, he holds a homemade tool called a corco: a stick with the bowl of a spoon, bent at 90 degrees, at one end. It resembles a ladle, and with a deft movement, D’Emanuele uses it to nudge the bird aside gently, just long enough to take a quick look at the egg beneath it. He jots down a few notes and moves on to the next burrow.

Here on D’Emanuele’s home of Linosa, an Italian island in the middle of the Mediterranean between Sicily, Tunisia, and Malta, the corco was once used to collect seabird eggs for food. Today, however, it helps researchers monitor the size and health of the island’s massive seabird colony. The corco, like D’Emanuele himself, has become a symbol of a shift in the relationship between tens of thousands of birds and the 400 or so humans on this tiny outpost of volcanic rock.

Linosa, about two square miles of rock surrounded by sea, is home to the second largest breeding colony of Scopoli’s shearwater (Calonectris diomedea). While the birds’ range extends from southern Africa and the Brazilian coast to the British Isles, they return to the Mediterranean each year to breed. Though their population numbers overall are declining, they are still common enough that it’s easy to take them for granted.

“Shearwaters are something like the sea: You know it’s there, and it is,” D’Emanuele says. When he was younger, like other children on the island, D’Emanuele joined the family hunt for eggs of the turriache, as locals call the bird.

In the mid-19th century, when humans first settled remote and rocky Linosa, collecting eggs for food was a necessity. As the island developed more reliable shipping connections with the outside world, the practice became more of a nostalgic tradition: Each May, families would ready their corco and assemble before dawn at designated spots in the lava fields. The jagged rock forms natural, narrow depressions called ribbe that are lined with crevices perfect for shearwater burrows. “Each family had their own ribba,” says D’Emanuele, adding that a single ribba might be home to up to 30 nests. In the mid-20th century, families often filled large baskets with the eggs, he adds.

“We would just take four [eggs] for our family,” D’Emanuele says. “My grandfather was old-fashioned. He appreciated eating that egg once a year.” D’Emanuele says his parents, however, didn’t like the eggs’ fishy taste and the family’s participation in the annual tradition waned. His family was not the only one to lose interest: Over the last 15 or so years, the annual egg hunt has faded to a memory.

During the same period, the shearwater colony attracted new interest, from far beyond Linosa. Ornithologists from various institutions began to arrive by the boatload. Since 2007, the conservation and research group Ornis Italica has maintained a field presence in the northwestern corner of Linosa, where most of the burrows can be found. Elderly locals helped the researchers map the area, and even shared locations of the family ribbe, allowing the scientists to tag and monitor about 600 nests.

D’Emanuele was still a teenager when an Ornis Italica researcher told him that, unlike humans, who established themselves on Linosa about 170 years ago, the Scopoli’s shearwater colony—with an estimated 10,000 mating pairs—had been there for millennia.

“I resented it a little, since I’m from the island,” D’Emanuele says, recalling his initial reaction. “Someone coming from outside told me something I didn’t know.”

He remembers being handed a shearwater chick to hold, and the feel of the chubby little animal covered in soft down. His perception of the birds, and the research, began to change. He adds that something else he learned about the seabirds’ migration and behavior resonated with him. The animals leave in October but come back in April, with monogamous mating pairs often returning to the same nest. The birds’ steadfast loyalty to a specific breeding site parallels how D’Emanuele feels about Linosa.

From high school, the island’s youth must leave—heading to Sicily, mainland Italy, or elsewhere in Europe—to continue their studies. “After four months away I start freaking out,” D’Emanuele says. “Here we say ‘u’ scogliu chiama.’ The rock is calling you, and it’s something you feel inside.”

After his first close encounter with a shearwater chick, D’Emanuele became more interested in conservation efforts on his home island. He spent a few months monitoring turtle egg nest sites on the black sands of Linosa’s Pozzolana Beach, and then decided to study natural sciences at Sicily’s University of Palermo. But the rock kept calling him.

Now, at 26, D’Emanuele is a member of the Ornis Italica team at Linosa. He has also encouraged other young people on Linosa to get involved in the birds’ conservation. He even created a WhatsApp group to alert him to birds in potential trouble, and to monitor late summer sightings of shearwater chicks attempting their first flights. “They are so clumsy,” D’Emanuele says. “You often see them on the street.”

His goal now is to bring others to the rock, and see it through his eyes. “Let’s turn Linosa into a field school,” D’Emanuele says. “Bring me school kids from all over Sicily. We can talk about biology, botanics, astronomy, and geology. This is an open-air teaching ground.”

Just 10 men are permitted to hunt and pickle 2,000 young seabirds on a desolate island each year.
forests

Across the central and western parts of the country, reverence for the deity translates to tolerance for predators.
islands

The curly-horned antelope is hanging in there—sometimes from a helicopter.
List

If you own your property, why not bedazzle it?
Video • AO Docs

3:07
Want to see fewer ads? Become a Member.
From Around the Web
Atlas Obscura Trips
Rome Behind Locked Doors: Music, Magic, and Secret Crypts
View This Trip
Thanks for sharing!