Come for the Controlled Flooding, Stay for the Gumbo - Atlas Obscura
Want to see fewer ads? Become a Member. 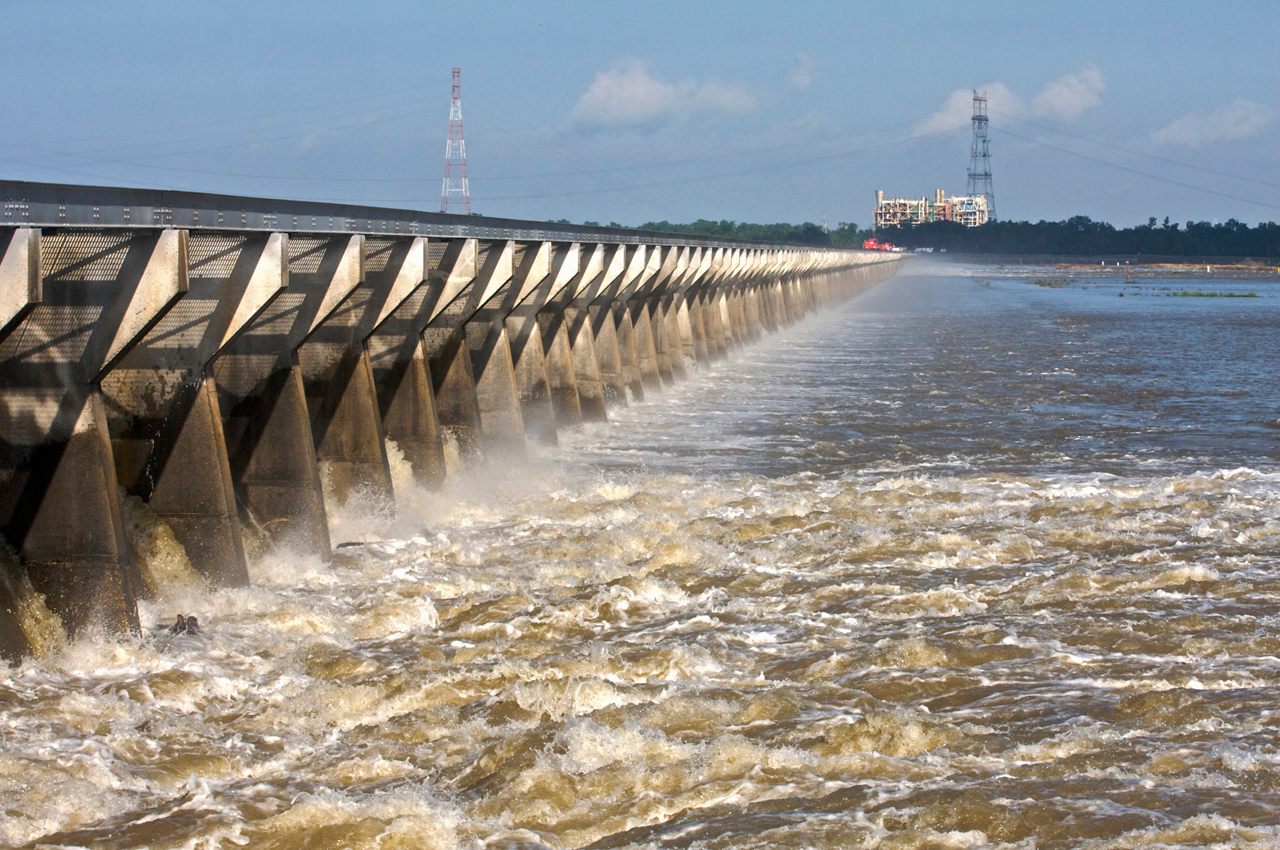 Read the words “Flooded Fries” on a restaurant menu, and what comes to mind? An image of soupy cheese drowning a plate of fried potatoes? Skinny tater tots topped with sausage gravy?

At the Spillway Café in Morganza, Louisiana, the “Flooded Fries” are named for actual flooding—specifically, the trillions of gallons of dirty Mississippi River water pressing against a nearby flood-control levee called the Morganza Spillway, ready to drown acres and acres of farmland.

“The scarier it gets, the more people come,” says Traci Ewing, owner of the Spillway Café (attached to a La Express gas station) and one of about 600 Morganza residents. “We drive over the spillway every single day. It’s not that big of a deal to us, but it does seem to draw tourists … We don’t really understand it, but we embrace it.”

For nearly all of 2019, the Mississippi River has remained stuck at dangerously high levels not seen since the Great Flood of 1927. Back then, to save the financial center of New Orleans, a hole was intentionally blown into a levee at Caernarvon, in St. Bernard Parish—a move that inadvertently helped flood a majority of Louisiana and several other states. Soon after, Louisiana built spillway levees that could be manually opened to dump excess river water into surrounding green space, taking some pressure off the Mississippi.

In 2019, for the first time ever, the U.S. Army Corps of Engineers has opened the state’s other spillway, the Bonnet Carre, twice in one year. And yet the river remains dangerously high, gorged with rainwater from this year’s historic storms in valleys north of New Orleans and topped off by several storms near New Orleans, including the city’s recent close encounter with Tropical Storm Barry. That means water is pushing up high against the gate of the Morganza Spillway, which hasn’t been opened since 2011 (and before that, 1973).

Residents here are ready. Some are even excited. That’s because controlled flooding—even the prospect of controlled flooding—has created its own side-economy. “Whenever they talk about opening the gates,” says Ewing, “then it’s a real tourist attraction.”

The spillway’s intricate flood-control system draws campers, hikers, and fishermen to the area, but it isn’t Morganza’s only tourist draw. The town is perhaps best known for its connection to the film Easy Rider. In that cult classic, the hippie-biker heroes eat at a restaurant called Melancon’s, then decide to camp out near the Morganza Spillway. During the night they’re attacked by local rednecks. (Jack Nicholson’s character dies.)

Nowadays a plaque on the ground commemorates the spot where Melancon’s used to be, invisible unless you hover directly over it. Still, says Ewing, it brings “a lot of bikers … during the summer.” This year there may be more than ever: Morganza will commemorate Easy Rider’s 50th anniversary with a festival on September 28.

The other lure for tourists, besides controlled flooding, is a single bald-eagle nest. Located along the highway near a spillway bay currently full of water, the old oak tree where the eagles reside has been pushed to death’s door by years of flooding. Soon it will fall. The town has built a replacement nest nearby, in hopes that the birds won’t depart too, taking tourist dollars with them.

But flooding is the main reason people come here. If you drive up to Morganza from New Orleans, you can stop on the way at the Bonnet Carre Spillway, built in 1931 and now framed as a tourist attraction. The Army Corps had to open this structure roughly every five years in its first several decades. But in the last five years, thanks to climate change and other factors, they’ve opened it four times.

The structure is essentially a cement bridge lined with 700 vertical, 8-foot-by-12-foot wooden timbers, which can be lifted with cranes to allow water to pass. Trillions of gallons have pumped out now for a record number of days, with the polluted freshwater making its way across several square miles of public green space, into Lake Pontchartrian, and eventually to the Gulf of Mexico. There, it nurtures oxygen-killing algae blooms that could create a “dead zone” the size of Massachusetts this summer.

This nasty freshwater is tentatively suspected of causing more dolphin and turtle deaths than the BP oil spill. It’s also ruined this year for shrimpers and crabbers and fishermen, in Louisiana and beyond.

None of the green space the Bonnet Carre floods is private property. But the same is not true for the Morganza Spillway. Farmer Rickey Rivet, who lives near it, must go to great lengths to move his livestock whenever the water creeps close to his farms, which are in the spillway’s path.

“Army Corps told me they were gonna open it on the 5th of June, then they told me the 9th, then they came back a few days later and said they wasn’t gonna open the Morganza Spillway [at all],” says Rivet “But by the time they called it off, I’d already moved 200 head of cattle onto a friend’s property an hour-and-a-half north in Alexandria.”

If the Morganza Spillway were to open, Rivet would stand to lose a few hundred acres of soybeans and sugarcane. Luckily he’s insured for that. “You gotta have insurance here,” he says. “I can’t farm without it.”

All the farms here are privately owned, but the state retains the right to flood the land whenever it feels the need to. And that won’t change. Rivet had to move his cows eight years ago too, during the flood of 2011. “The first time I moved ’em was in 1973,” he says. “My father owned the cows then, and I was a senior in high school.”

Ewing, the Spillway Café owner, says that flooding bonds her and her Morganza neighbors. “This is a particular community, and in our little economy what affects the farmers affects us all in some way,” she says. “Most of [my neighbors live] on the side where, if the levees broke, we’re in the bowl where we’d be flooded … It would be nice if they never had to open the spillway, but then we don’t want the levee to break.”

Rivet agrees: “We gotta have somewhere to relieve the Mississippi. We just gotta.”

His wife, Carla, sits on the board of directors at the Morganza Restoration Cultural District, which has some big plans to increase local tourism—in ways that don’t involve flooding.

“We’d love to do an agribusiness tour for people in Morganza, where they can see the spillway, the sugarcane, the soybean fields, and our bald eagle,” she says.

The Mississippi River isn’t expected to recede anytime soon. But if it does, Ewing, for one, is ready: Besides the Spillway Café, the town’s only restaurant, her second La Express franchise—seven miles away, on the other side of the spillway—has a deli and a daiquiri stand. She says she needs two different shops to meet the two different states of Morganza: wet and dry.

“When the river’s open and everyone’s out here camping, the daiquiri shop does better,” she says. “But when the water’s up, then we’re a little busier over on this side.”

Her summation of this business predicament also seems to describe living in Morganza—or anywhere along the Mississippi River—in this age of climate change: “There is no best of both worlds.”

How Do You Keep a Subway From Flooding in the Age of Rising Seas?

You seal it up, but you have to test it first.
floods

The coastal community of Selsey welcomes the return of salt marshes where farms once stood.
gates to hell

Turkmenistan’s Darvaza gas crater has been on fire for decades. The inferno may finally be extinguished.
islands

All you need is a dream, investors with deep pockets, and concrete. A lot of concrete.
Video • PinDrop