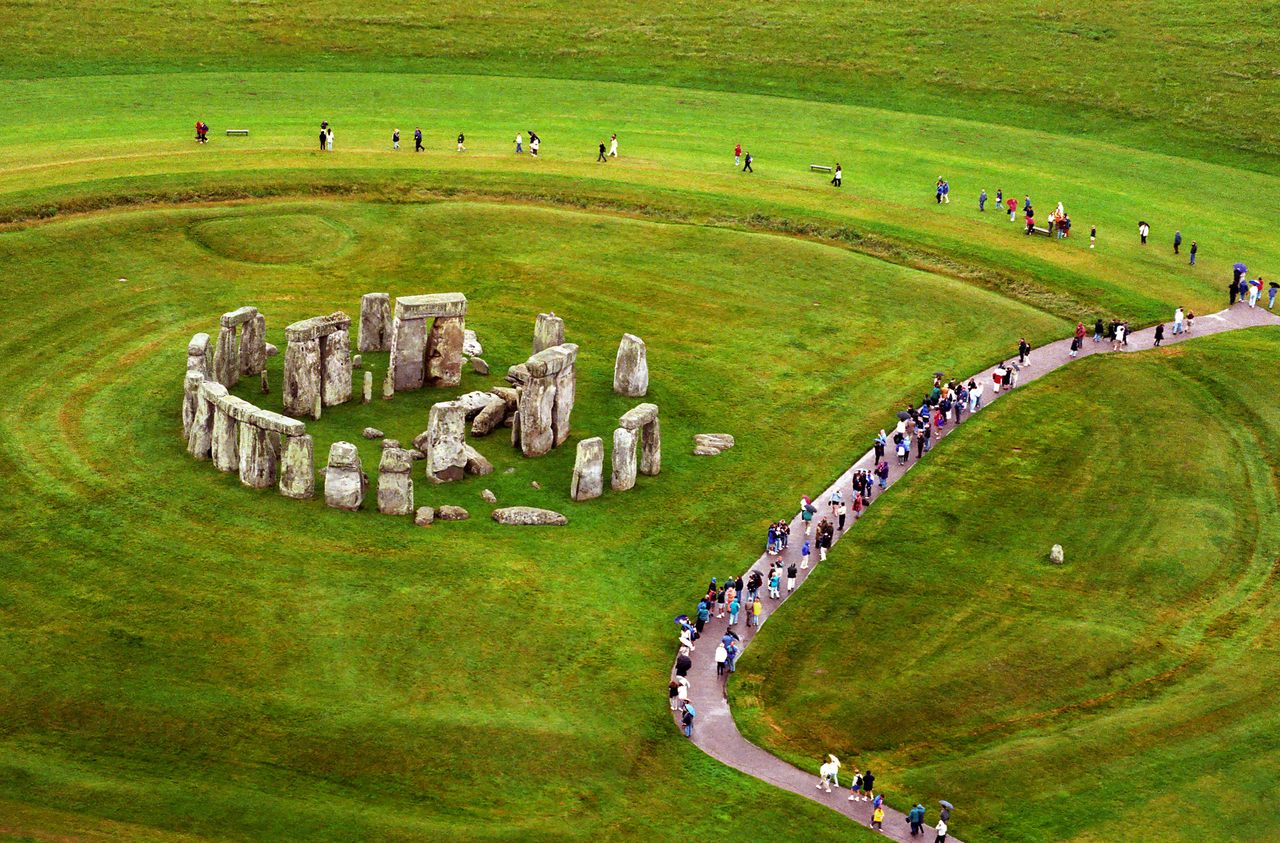 Did lard help these megaliths make it to Stonehenge? Marc Hill/Alamy Stock Photo
In This Story
Place

If you had to lug huge slabs of rock—really, truly immense slabs of rock—across vast distances and stubborn slopes, you might take any help you could get. You might even be game to slather the slabs—or the sledges that pulled them—with rendered pig fat, to help them glide along.

That’s the gist of the “greased sled” theory of how builders hauled the hefty megaliths that form Stonehenge. Researchers know that humans transported some of the one- and two-ton bluestones (smaller than the hulking sarsen stones) more than 140 miles from the Preseli Mountains in Wales before propping them up at the site.

This was a brawny feat, as archaeologists demonstrated in 2016 when they recruited volunteers to huff, puff, and yank a one-ton stone splayed atop a sycamore sleigh and pulled across timbers. Based on their calculations, it would have taken a full hour for a 10-person team to drag a stone a single mile—and the heavier bluestones would have called for more people and more elbow grease.

Researchers who subscribe to the “greased sled” idea would say that it might have involved some literal grease too, smeared on the rocks to reduce friction. In a new paper in the journal Antiquity, Lisa-Marie Shillito, an archaeologist at Newcastle University, serves up some evidence.

Shillito studied fats left behind on some Neolithic pottery sherds found near Stonehenge, in the prehistoric settlement of Durrington Walls. These were previously analyzed by archaeologists on the Feeding Stonehenge project, an effort to study cooking and animals around the site (Shillito worked on that project too).

While prior research interpreted these lipids as leftovers from feasts, Shillito spins them a different way. She points out that pig remains found nearby indicate that the animal was cooked whole on a spit, instead of chopped up and prepared in the vessels. She suggests that these vessels weren’t cooking implements but storage buckets, where the prehistoric workers stashed fat as the animals cooked.

In Shillito’s reading, this fat was later rendered as lard (which she calls “pig ‘tallow’”—a nod to the term for fat that’s rendered from cattle and sheep). Worn-out workers, she suggests, might have given things a rub-down with the soft substance to make the surfaces a little slicker.

“This is an interesting way of looking at the lipid results … but it doesn’t quite convince,” writes Mike Parker Pearson, an archaeologist at University College London and director of the Feeding Stonehenge project, in an email. “Tallow wouldn’t really have been needed to erect them at nearby Stonehenge, after the journey was over. If it were used by Neolithic stone-haulers, we’d expect tallow to have been employed previously along the route and not at its destination.”

Oliver Craig, a biomolecular archaeologist at the University of York who also researched food and animals at Stonehenge, argues that the relative amounts of carbon and nitrogen in the charred deposits still stuck to the sherds suggest that the vessels were used for cooking.

And Harry Robson, a postdoctoral fellow in bioarchaeology at the university, contends that “all but one” of the Durrington Walls samples Shilito studied fall outside of the lipid concentrations that point to tallow.

While Pearson doesn’t disagree that Neolithic people might have produced tallow and “potentially could have employed it” on the journey to Stonehenge, he’s not convinced that the Durrington Walls evidence proves it.

Shillito, too, is curious about whether traces of lard or tallow may turn up on other bits of pottery discarded between stone quarries and Stonehenge. There’s likely much more to learn about what happened along the way, because some suspected ancient pathways were later buried by more modern roads. “What would be interesting is to examine the likely routes of transport to see if there are any intermediate sites where grooved ware pottery is found,” Shillito says. “Campsites, if you like.”

Either way, she noted in a news release, it’s a good practice for researchers to stay nimble in their interpretations. “Until now, there has been a general assumption that the traces of animal fat absorbed by these pieces of pottery were related to the cooking and consumption of food, and this steered initial interpretations in that direction,” she said. “But there may have been other things going on as well.”

Meanwhile, if you roast a pig in 2019, please spare your sewer the indignity and cost of a fatberg and dispose of the excess gloop without pouring it down the drain. If you happen to have some megaliths to move, though—well, it can’t hurt to grease them up.

Meet the Noisy, Head-Butting Marine Worms That Live Near Japan

Found: Two of the Quarries Responsible for the Megaliths of Stonehenge

And evidence for how the massive stones were removed.
geology

The main source for its largest megaliths is just a stone’s throw from the iconic site.
archaeology

It’s hard to think straight when your brain is asymmetric.
caves