Explore the Magic of Oregon in This Interactive Map - Atlas Obscura 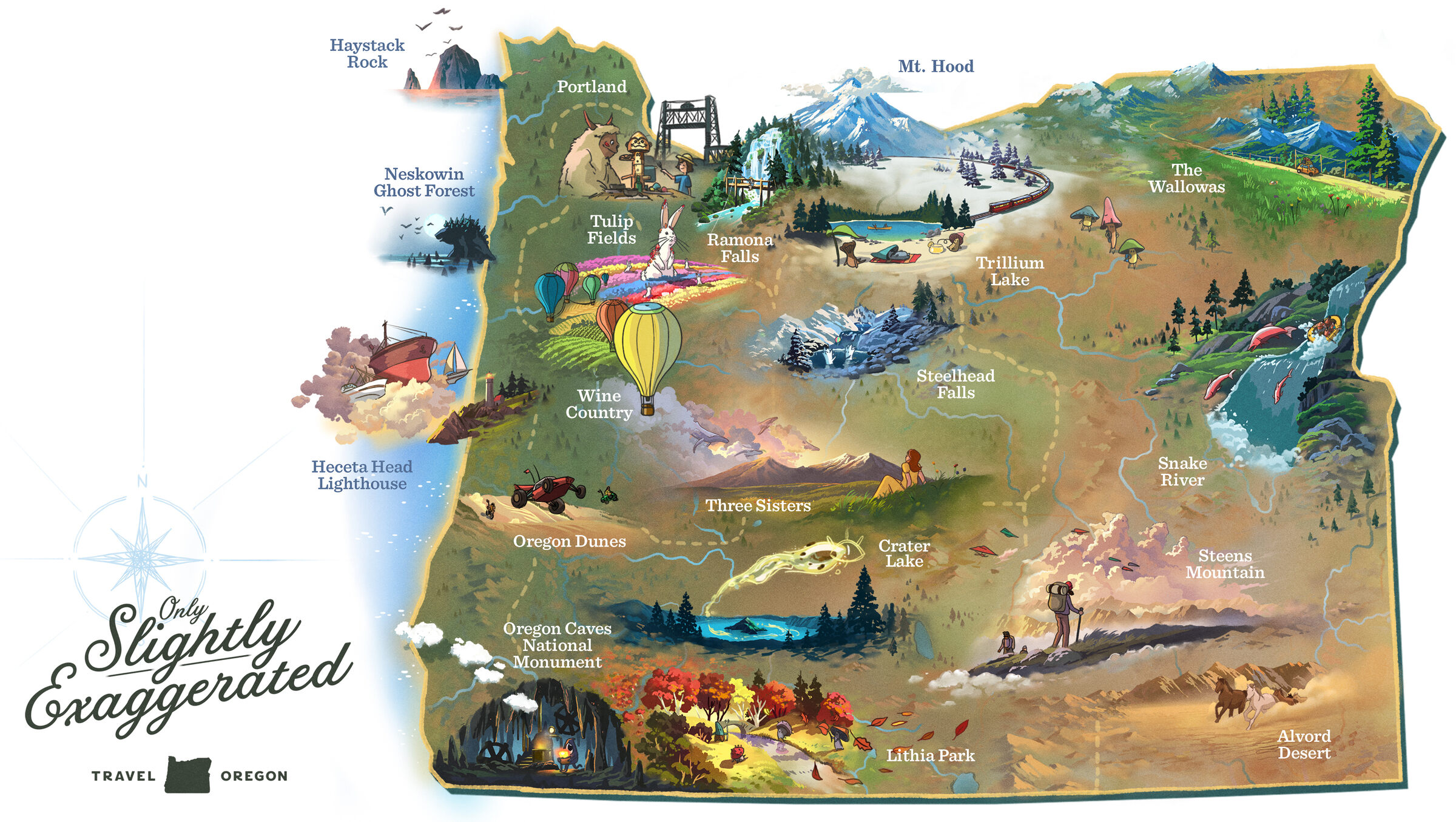 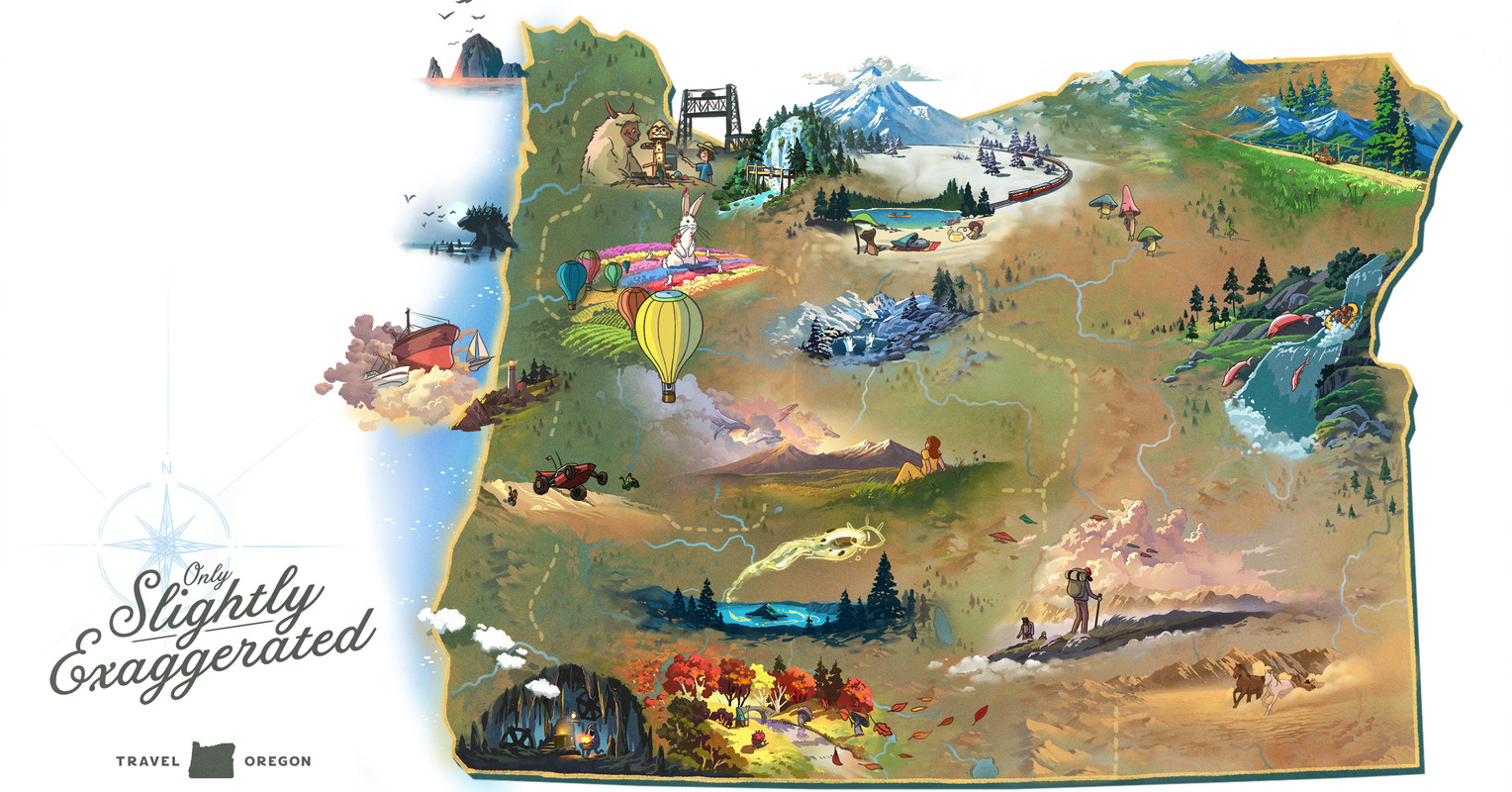 All illustrations courtesy of Wieden+Kennedy. Click the map above to explore each of Oregon's seven wondrous regions.

Land, sea, and sky have long been an inspiration for the world’s great works of art. It’s less common that nature is the muse for great ad campaigns. But the creative team at Wieden+Kennedy agency found wonder and majesty in their home state of Oregon when they started brainstorming their award-winning campaign for the state’s tourism board, “Only Slightly Exaggerated.”

W+K creators were challenged to capture the pure awe they were struck with when gazing upon Oregon’s peaks and canyons. To convey whimsy and grandeur where ordinary photos fell short, illustrators set out on the lofty undertaking to animate Oregon.

In their new book Only Slightly Exaggerated: The Art of Travel Oregon, W+K takes us behind the scenes to see the vistas that inspired the vision. Click through the map above to discover Oregon’s seven regions and W+K’s award-winning illustrations, then scroll further to see the real places that spawned their fanciful interpretations.

Standing on the fog-shrouded headlands of the Oregon Coast, gazing out at the tumultuous Pacific Ocean, it’s easy to feel that you are at the edge of the known world. But this mysterious paradise is very accessible, and the state’s coastline has something to offer every kind of traveler. The Neskowin Ghost Forest, a beach where ancient sitka spruce stumps rise eerily from the sand, is perfect for contemplation, while more action-oriented visitors can ride off-highway vehicles over the white sand at the Oregon Dunes National Recreation Area. Take in the view of Heceta Head Lighthouse, on a craggy 200-foot bluff near the charming coastal town of Florence, or marvel at the mysterious shape of Haystack Rock at Cannon Beach, home to puffins, cormorants, and gulls.

Eating in Portland is an adventure in its own right, one in which the state’s bounty comes to you on a silver platter (or a paper plate!). You’ve probably already heard about the city’s farm-to-table tradition of fine dining, with its emphasis on fresh local ingredients and innovative, sometimes idiosyncratic flavors. You may not have heard about the outdoor Portland Mercado, where you can find varied Latino cuisine; or the hot pot, dim sum, and banh mi you might enjoy in the city’s Jade District. Thirsty? Portland has an overflowing craft beer scene, and a remarkable 15 urban wineries within city limits. And don’t forget the seafood: the freshest offerings pulled straight from the Pacific can be found on menus all over town, including salmon, Dungeness crab, and oysters with a briny kick.

The snowy summit of Mount Hood rises 11,239 feet above sea level, an immense and powerful presence with moods that change depending on the season, the light, and the clouds that materialize around its lofty peak. You can explore its slopes on foot—there are many routes to the top, with varying degrees of difficulty—but take care, as changeable weather and snow conditions can make this dormant volcano perilous for climbers. The slopes are also a major draw for skiers, mountain bikers, and hikers who seek out wonders such as the 120-foot-high Ramona Falls, a wall of delicate cascades deep in the forest. For a more sedate perspective on the mountain, have a swim or a float down Trillium Lake on a canoe ride, or take a trip on the historic railroad at Mount Hood, which leaves from Hood River in the Columbia River Gorge National Scenic Area and provides stellar view along its entire route.

Floating through the air above the Willamette Valley is a dreamy way to take in an overview of its gently rolling hills, fertile fields, verdant forests, and lazy rivers. There are several hot-air balloon companies that will take you aloft so that you can take in the peaceful vistas. Back on the ground, you’ll be able to explore some of the the vineyards that make this one of the most productive wine countries in the Pacific Northwest, winning international recognition for its superior vintages, especially its pinot noirs. If you’re lucky enough to visit in springtime, you can immerse yourself in the riotously colorful blooms of the tulip fields at the Wooden Shoe Tulip Farm, where sighting a giant white rabbit is highly unlikely, but kaleidoscopic views are part of the gorgeous package.

The geologic attractions of Southern Oregon are a reminder that we live on a planet that is constantly transforming. The sparkling waters of Crater Lake are the deepest of any lake in the United States and among the deepest in the world, the legacy of a massive volcanic eruption 7,700 years ago that triggered the implosion of a 12,000-foot mountain. Today, the pristine lake, surrounded by 2,000-foot-high cliffs and old-growth forests, draws hikers, bikers, and boaters to its shores. If underground exploration is your thing, you can go deep beneath the Siskiyou Mountains at Oregon Caves National Monument, where rangers will guide you through some of the 15,000 feet of marble passageways. Feeling brave? You can follow up by searching for Sasquatch in the nearby Rogue River-Siskiyou National Forest, where past sightings led to the construction of the nation’s only Bigfoot trap. And if you’re here for the scenery, visit during autumn to experience Lithia Park’s spectacular foliage first-hand.

The glacier-covered mountains known as the Three Sisters are an emblem of Central Oregon, a trio of volcanic peaks that define the state’s wild and unpredictable heart. Part of the Cascade Volcanic Arc, a major seismic feature, the Sisters (known as North Sister, Middle Sister, and South Sister) anchor a vast wilderness area filled with opportunities for hiking, climbing, and camping. They are visible for many miles around, and while they are dormant, geologists are keeping a close eye on South Sister in particular, in case she awakens one day. Not far away is Steelhead Falls, a picturesque cascade just a short walk from the trailhead. On a hot summer’s day, a quick plunge in one of the swimming holes here is sure to cool you down.

Eastern Oregon is one of the wildest parts of the state, where the intrepid traveler can find deep solitude and dramatic natural adventures. Visit the Wallowas, a spectacular mountain range dotted with Gold Rush-era ghost towns; the ruts left by 19th-century settlers’ wagon trains are still visible in places. Or venture to the Alvord Desert, where wild horses roam the austere playa in the shadow of Steens Mountain and hot springs bubble from deep in the earth. Eastern Oregon is also where you’ll find the Snake River, an officially designated Wild and Scenic waterway and historically one of the most important spawning grounds for Pacific salmon. Raft trips can take you out onto the Snake as it winds its way through remote natural areas including the thrilling rapids of Hells Canyon, the deepest river gorge in North America.

This post was created in partnership with Travel Oregon. "Only Slightly Exaggerated: The Art of Travel Oregon" is now available for download.

An ad campaign from Travel Oregon takes you on a fantastic voyage through the state.
Sponsored by Travel Oregon
travel oregon

An ad campaign from Travel Oregon takes you on a fantastic voyage through the state.
Sponsored by Travel Oregon
Want to see fewer ads? Become a Member.
From Around the Web
Thanks for sharing!