Malaysia Has Good Ghosts, Bad Ghosts, and Gremlin-Babies That Will Steal Your Stuff - Atlas Obscura
Want to see fewer ads? Become a Member. 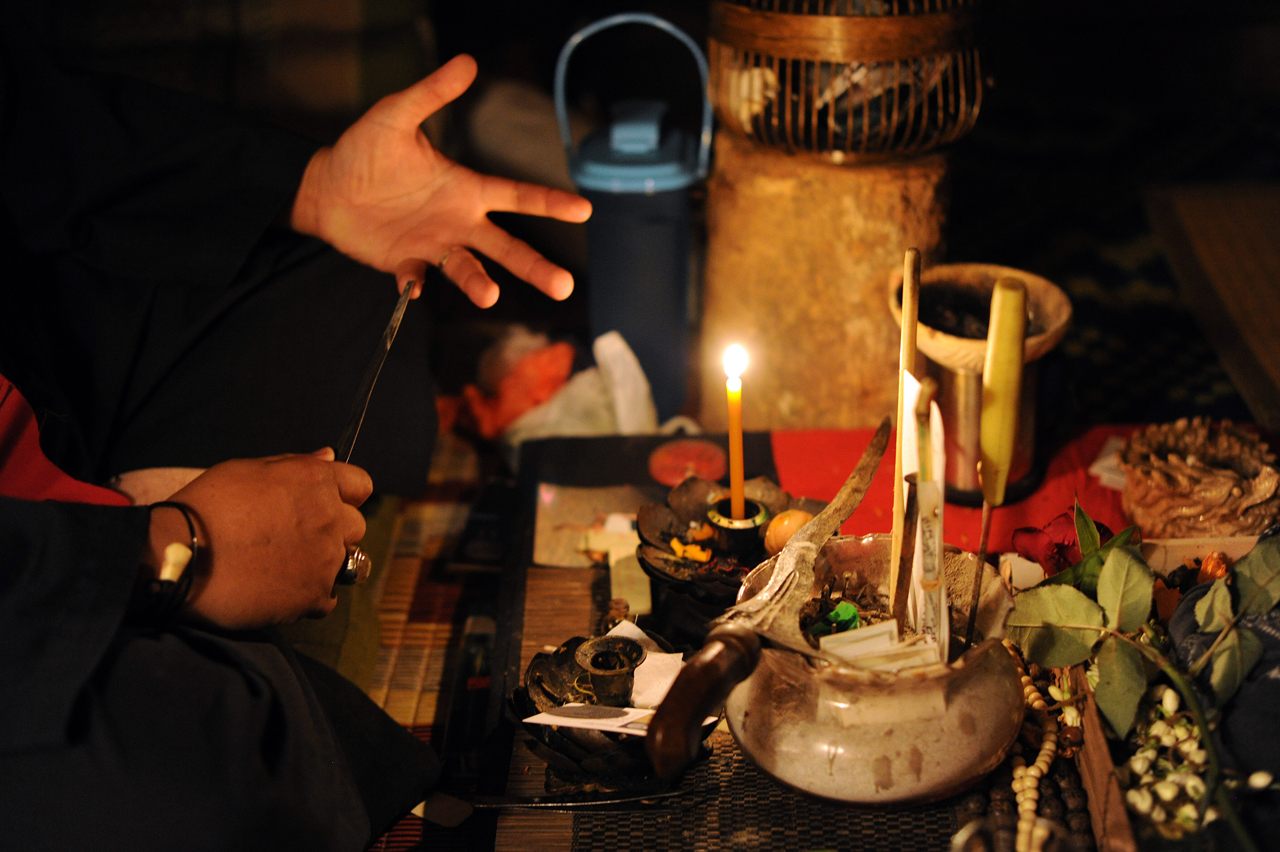 A Malay bomoh, or medium with the paraphernalia he uses to treat illnesses. The occult is popular in Malaysia, despite Islamic prohibitions against it. SAEED KHAN/AFP/Getty Images

Everybody loves a ghost story. Really, everybody. All cultures have some variety of ghost story, by that name or another. But some are more pervasive and deeply ingrained than others. It isn’t really possible to identify the most ghost-heavy culture on the planet—there’s no clear metric for how one would judge such a thing. But few ghost cultures are as powerful and varied as the ones found in Malaysia. The modern English and North American conceptions of ghosts—from the ones under bed sheets to Victorian-garbed, translucent shades to the poltergeist that makes things go bump in the night—feel downright embarrassing in their limits when compared to the great world of Malay hantu.

Hantu is the general term for all ghosts, spirits, and otherworldly beings in Malaysia and among the Malay people of maritime Southeast Asia and its diaspora. There are hundreds, probably thousands, of them, ranging from natural spirits (representations of individual rivers, trees, and lakes) to vampire-type ghosts to leprechaun-like tricksters. Some are good, some are bad, some are to be avoided, and some are like partners to the living. And they coexist with wide range of religions observed by the very diverse people of Malaysia.

With a strategic location straddling the South China Sea, the land of the Malays has been a fluid and multinational place for thousands of years. Malaysia, known by that name or not, has been a vital trading post for huge empires: China, India, the Arabs, the Netherlands, Portugal, England. The indigenous people of Malaysia, called the Orang Asal, practice what the state (and researchers) tend to classify as a type of animism, with various natural objects held as sacred.

And all of those empires left their religions—and their more spiritualist aspects—behind, too. Today Islam is the most-practiced faith in country, but there are substantial numbers of Christians, Hindus, Buddhists, and others. (There were Jews for a long time, too; today, not so much. And ethnic Malays enjoy advantages that starkly stratify society there.) Malay ghost culture is, therefore, a hybrid of spirits, spooks, and haunters from around the globe.

“It certainly has a very big place in the culture,” says Cheryl Nicholas, an ethnographer at Penn State Berks who was born and raised in Malaysia and who has made Malay ghost culture a central part of her research. “Whether or not that continues in the more modern era, I don’t know. I still feel the presence whenever I go back.” These ghost stories that imbue the culture of Malaysia seek, as many supernatural or religious stories do, to explain the mysteries of life and help lead a person to a more successful, longer, or more profitable one. Ghosts or spirits vary throughout the country and the culture, but there are some particularly popular individual types or broader categories

One of the most popular types is a sort of vampire-ghost. The pontianak is one that emerges upon the death of a woman during pregnancy or childbirth. She has the shape, usually, of a demonic woman capable of flight, who targets the blood of young children. (Alternatively, the pontianak may prey on men; these stories vary by region and teller.)

There are, in fact, a wide variety of ghosts floating around the concepts of birth and young children. There’s the hantu tetek, a ghost with pendulous breasts who likes to kidnap children just to play with them for awhile. She is used to explain why sometimes a child is found, unharmed, in a weird place, like deep in a bush or up a tree.

My favorite is the toyol, which is usually described as looking like a naked baby, though sometimes as more of a gremlin-baby. The toyol is very different from Western ghosts in a specific way: You can buy one.

Typically one purchases a toyol from a bomoh, or medium. It wouldn’t quite be described as a purchase, since you’d be paying the bomoh for connecting you with a toyol and the spirit itself would be free. Toyol are childlike: mischievous, a little clumsy, a little needy, easily distracted. But they are known as excellent thieves. You can have your toyol go out and steal for you, though Nicholas says it’s sometimes believed that a toyol will only steal up to the dollar amount you paid for it.

“The people in the village use that to explain petty theft,” she says. It also explains why you might see some shiny toys or marbles in front of rural Malaysian houses: countermeasures to distract a thieving toyol and give it something to play with. Nicholas says the best place to find a toyol isn’t in Malaysia, but rather near Mecca, Saudia Arabia. Muslim pilgrims have to discard all the bad influences in their lives for the Hajj, and though toyols aren’t exactly evil, they’re not what one would consider a force for good. In any case, you’ll find toyols near Mecca in the same way you’ll find stained Ikea furniture on move-out day at a college dorm.

The idea of owning a ghost of your own splits particularly hard with the Western conception of spirits as either barely aware of the modern world, or preoccupied with scaring people, or in search of eternal rest. Some Malay ghosts are more like partners to living humans, working side by side as protection—or to do one’s dirty work. Take the hantu polong, a sort of attack ghost used to inflict harm. It must be fed with blood from one’s fingers.

Nicholas’s work cataloging the wonders of Malay ghost culture has turned up dozens of species. There are some that cause specific health issues: The hantu buta causes blindness, hantu cika causes colic, hantu kembung is behind stomach aches. Some are more innocuous: Hantu apu is a party ghost, and so is hantu jamuan, though if it is not invited, it will wreck the festivities. Note to self: Remember to invite the hantu jamuan.

Another interesting aspect of many of these ghosts is the interaction, acknowledgement, or maintenance they require. Hantu lembong is a spirit of swollen growths on trees. Nicholas related a story she had been told about a man who had to formally apologize to this ghost after peeing on one of its trees while on a hike in the forest. If you disturb the soil, you might want to make an offering to hantu jembalang, a spirit of the earth. There are gigantic ghosts who get bigger the closer you get to them, ghosts with the head of a dog, ghosts that break traps to set animals free, ghosts of the moon and the sun and the sea. There are powerful elemental ghosts who should under no circumstances be messed with, and ghosts who throw stones at people for kicks.

“Ghosts are always a plausible explanation for Malaysians,” says Nicholas. A prominent urban bomoh even made international news following the disappearance of Malaysia Airlines Flight 370. He eventually claimed the plane was being hidden somewhere in Southeast Asia by the orang bunian, sort of like invisible supernatural elves.

The robust ghost culture only occasionally runs afoul of modern globalist culture of the industrialized nation. “There is a very distinctive negotiation between the public and the private” regarding ghosts in Malaysia, says Nicholas. When she traveled around the country seeking ghost stories, many people would repeatedly explain, and demand that she understand, that they are good Muslims before acknowledging and revealing all their great ghost stories. But ghosts are simply too entrenched in Malay culture to go away. There are tremendously popular ghost movies released all the time. A Malaysian rapper recently offered a reward for the name of the bomoh responsible for a curse put on him. Bomohs are sometimes used to find missing people.

In Malaysia, it seems, you’re never too far from a ghost. It’s not inherently good or bad, it’s just in the air.

Depending on the ghosts, it might fetch a premium.
victorian

A guide to traveling with "the wickedest man in the world."
haunted