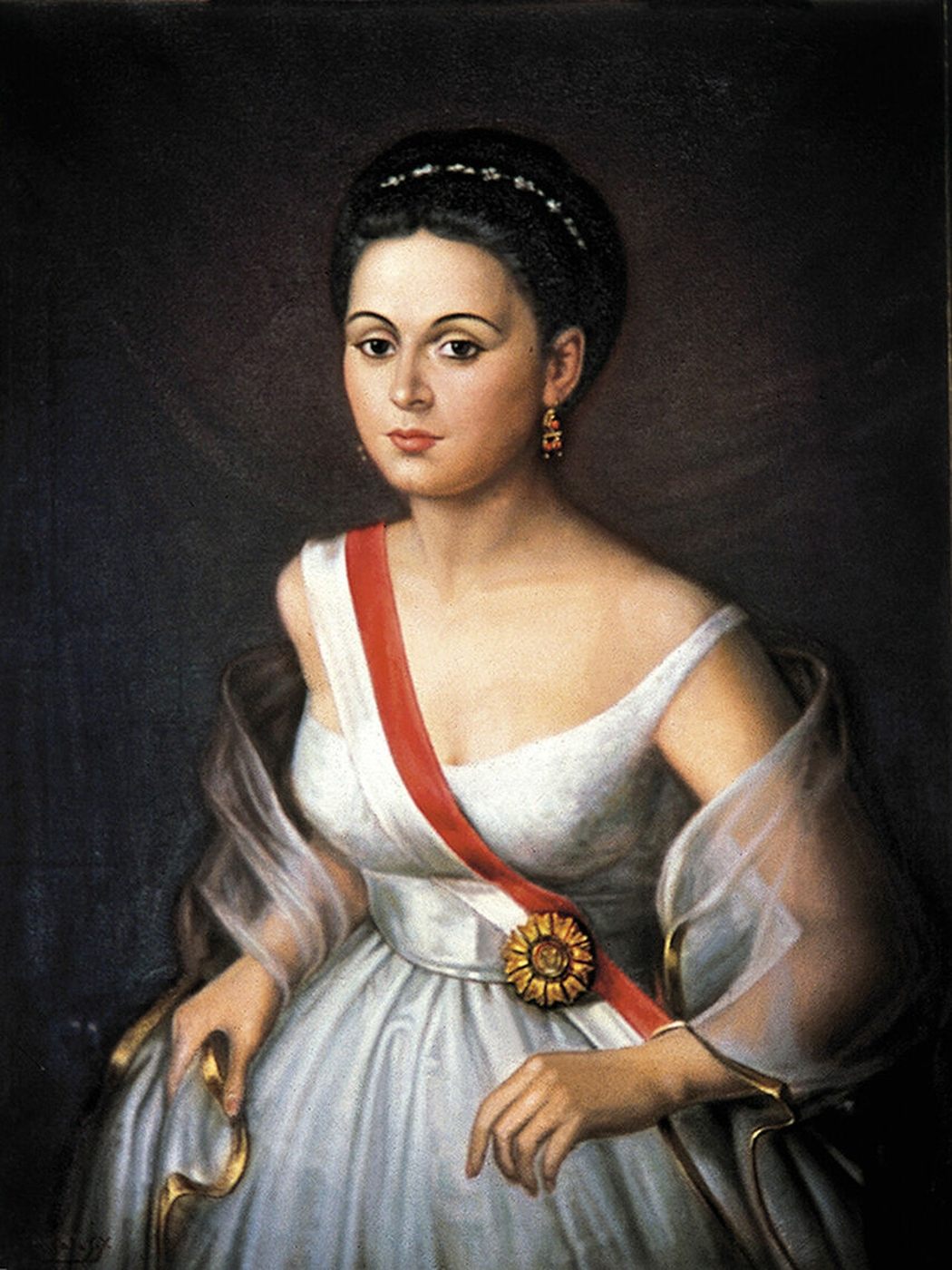 All sorts of legends have sprung up around Manuela Sáenz—from the time she supposedly wore a dead enemy's mustache to her rumored skills as a sharp-shooter. In her biography, scholar Pamula S. Murray has found the real Sáenz, a complicated, nuanced figure who changed the world. Public Domain

On the evening of September 25, 1828, Manuela Sáenz received a letter from her lover. He wasn’t feeling well and would she come to the palace? She found the Venezuelan revolutionary Simón Bolívar feverish in his room at the Palacio de San Carlos in Bogotá, Colombia. She read him soothing poetry as he slipped into a warm bath. Then the pair climbed into bed and fell asleep. But, soon after midnight, Sáenz woke up to dogs barking and the sound of footsteps.

Twenty-six assassins had come for Bolívar. Twice Sáenz persuaded Bolívar not to run into the hall and fight the intruders himself. Sáenz finally convinced him to jump out the window. When the assassins burst into Bolívar’s room, they found only Sáenz. She played dumb and gave confusing roundabout answers. Frustrated, the conspirators beat her with the flat of their swords. And that was the second time Sáenz saved Bolívar’s life.

But saving Bolívar’s life multiple times wasn’t the only thing that made Manuela Sáenz extraordinary. Sáenz defied societal convention. She was a spy. She protested for women’s rights. She wore a custom-made Colombian colonel’s uniform. She threw fantastic parties, loved dogs, and maybe even had a pet bear. In a letter, Bolívar referred to his favorite mistress as “that gentle, crazy woman” and eventually gave her an official government position as his archivist.

More than 150 years after her death, Pamula S. Murray, a 19th-century Latin American scholar from the University of Alabama at Birmingham, has resurrected Sáenz from obscurity. Atlas Obscura talked with Murray about the women that fueled Latin America’s independence movements, why Sáenz wore a colonel’s uniform, and how Hillary Clinton inspired her to write a biography about Sáenz, For Glory and Bolívar: The Remarkable Life of Manuela Sáenz.

Why did you take such an interest in Manuela Sáenz?

I took an interest because of the role she wound up playing within the Latin American independence movement led by Simón Bolívar. She became part of his inner circle and that was really interesting to me because I had never heard of women being involved in political life before this. They generally were not, but this was a time of revolution. And so I think revolution opened up some spaces for women.

Sáenz met Simón Bolívar in Quito, Ecuador. She became his confidante and one of his fiercest defenders. She actually collaborated with some of his supporters to overthrow the regime in Bogotá and to put him back in power. Of course, his enemies became her enemies. And several years later, they found a way to accuse her of subversion and exiled her to Peru. But even in exile, she remained politically active. She stayed in touch with many of Bolívar’s old lieutenants. I found a whole group of letters between her and one of them, who became president of Ecuador.

How did the independence movements in Latin America open up spaces for powerful women?

In all of these rebellions against the Spanish, you see women playing very active roles, on both sides. They were spies. They followed armies and treated soldiers’ wounds and cooked their meals for them. Upper-class women were among the main conspirators against the Spanish regime. They helped hatch the first rebellions in their homes. They disseminated information. They were couriers and arms traffickers.

It’s not surprising that someone like Manuela would appear in this context in which women were so active. It just so happened that she became involved, mostly politically, with the most famous leader of the independence movement in South America. That’s why she’s gotten as much attention as she’s gotten, but behind her were a lot of other women.

Can you describe Sáenz’s personality?

She was bold. You might even say brash. She was out there in a way that most women were not. For example, when she was living in Bogotá (she had gone up there because Bolívar had asked her to rejoin him), she would often go out wearing a colonel’s style military uniform. She was very charming and knew how to throw a good party. She had many friends. She was a prankster. She herself said in one of her letters, “I love nothing better than laughter and a good joke.”

Probably the most dramatic example of her assertive personality is when Bolívar went off into exile. His enemies began denouncing him in the press and calling him all kinds of names and calling her names. One day she found some graffiti denouncing him and her—accusing him of wanting to be a monarch and her to be a monarch’s consort. She put on her uniform, got on her horse, and with her servants went out to where the graffiti was in the main plaza of Bogotá. She had her pistol and she threatened to shoot down the pieces of paper that had these caricatures on them unless the local police moved out of the way (her enemies in the local government had sent some people to guard where this graffiti was hanging). She was not afraid to confront people that she knew were against her and Bolívar.

How did the treatment of modern women in power propel you to write about Sáenz?

One very important reason why I wanted to write this book was the fact that I could not ignore what was happening with Hillary Clinton back in the 1990s when Bill Clinton was president. Hillary Clinton was very involved in putting together this healthcare reform plan. She took a lot of flak for that. And she continued to be a lightning rod for Republican criticisms of the Clinton administration just for having some influence, for being his partner. She took flak even for the way she fixed her hair. And I just remember thinking, “ok, she’s a powerful woman. She’s doing things that first ladies don’t usually do and people just can’t get over it.” It’s a similar phenomenon with Manuela Sáenz. Sáenz was a woman in a place where people didn’t think a woman should be, having influence from behind the scenes.

You know, today we claim to accept women with political power more than we did 200 years ago. But, in the case of Hillary Clinton, I just began thinking, “Wow, this has not gone away”—this fear of women being close to power, having political influence, being on the inside. It still bothers a lot of people.

Why have Manuela Sáenz and women like her been overlooked?

One of the most basic reasons has to do with the difficulty of finding source material. In the case of women in 19th-century Latin America, the literacy level was quite low. Only the very elite had some access to an education, so you just don’t find the letters that you would find in England or in the United States. And if there are letters, it’s hard to find them. Not that many survived.

Then with Manuela Sáenz, there’s also this mythology that grew up around her. She’s this eccentric woman. She’s called a “slut” basically. There’s sort of a black and white image of her. Whether you praised her or you criticized her, you were not really looking at the real person. That’s what I was trying to do—to get at who she actually was as a person and cut through some of that mythology and that sensationalism.

Writing a New History of Women

The women of England’s SOE fought on the beaches of Normandy, sabotaged the Nazis within France, and turned the tides of the war.
royalty

A new book tells the tales of the queens of Jerusalem.
ships

Meet the painter, the pilot, the author, and other "firsts" who paved the way.
Video • Object of Intrigue