How Locals on Mauritius United To Fight an Oil Spill With Their Own Hair - Atlas Obscura
Want to see fewer ads? Become a Member. 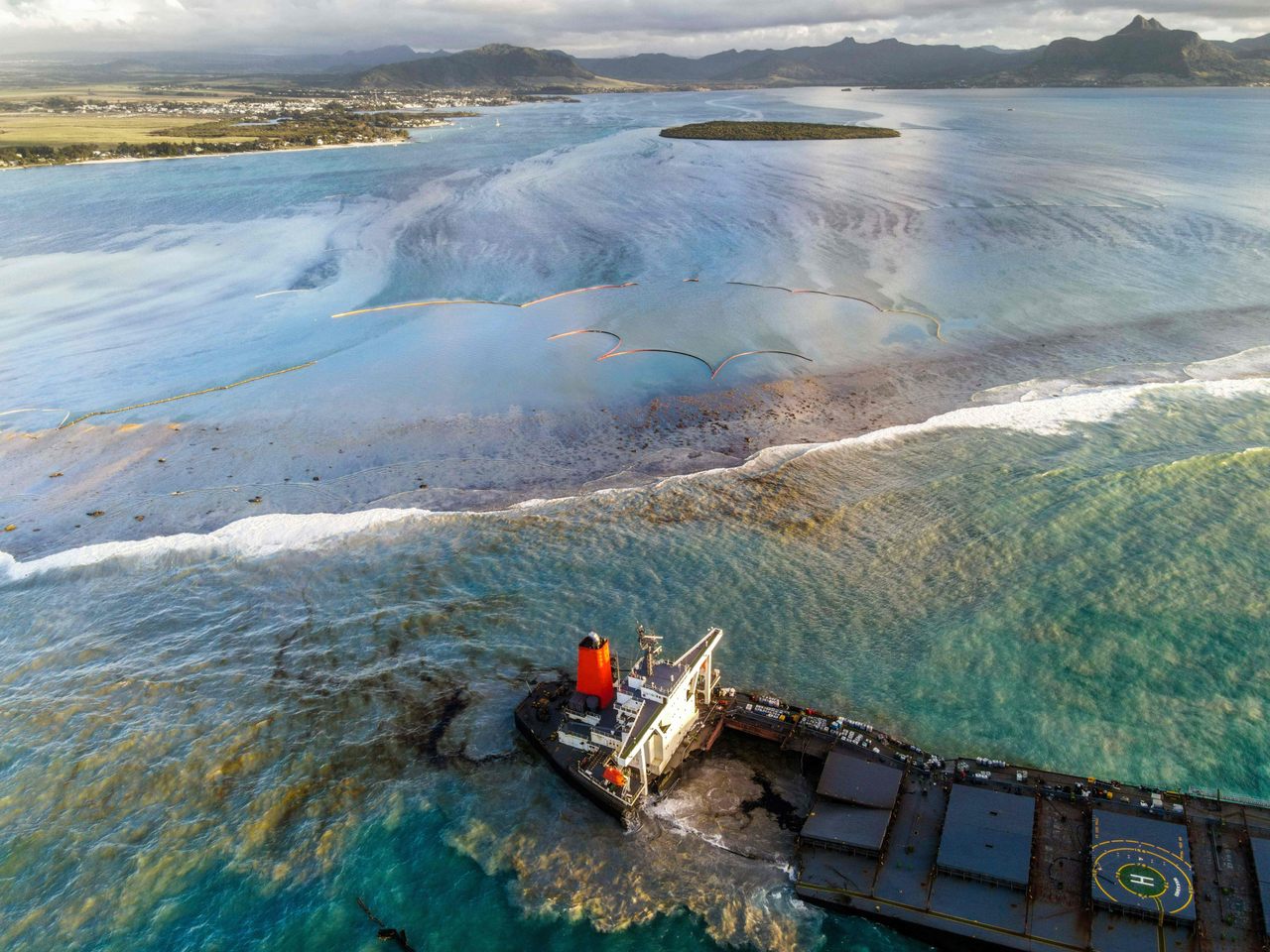 The vessel MV Wakashio ran aground off the southeast coast of Mauritius in July 2020, leaking oil that fouled waters known internationally for their biodiversity. STRINGER/AFP/Getty Images
In This Story
Destination Guide

Night had fallen on Mahebourg, a bustling trade town on the southeast coast of Mauritius, when what would come to be called the “people’s factory zone” met for the first time. It was an enterprise born of necessity: A crisis was unfolding only a few miles offshore, in the pristine waters from which many of Mahebourg’s residents earn their livelihoods. That first August night, just a handful of locals showed up to rally around what seemed like a dubious idea. To protect the coast from a devastating oil spill, they would make booms from whatever they could find: single-use plastic bottles, fibrous sugar cane waste, even human hair. Word of the DIY initiative spread. Within hours, hundreds of Mauritians came to the people’s factory zone to contribute whatever they could. For weeks on end, an expanding army of islanders worked round the clock, even cutting off their own hair to add to the growing lengths of handmade booms.

“I was surrounded at all times by 200 to 300 volunteers, from fisherfolks and skippers to teachers and students, from homemakers and children to off-duty police officers,” says Virgine Parisot, one of the volunteers. “It felt like the birth of a new movement.”

Mauritius, an island nation of less than 800 square miles, rises up from the Indian Ocean about 700 miles east of Madagascar. The main island’s mountainous interior is fringed with beaches, lagoons, reefs, and banks of seagrass renowned for their biodiversity. On July 25, 2020, MV Wakashio, a Japanese-owned cargo ship heading to Brazil, ran aground on a coral reef just off the southeast coast. Two weeks later, oil began to leak from the wrecked ship, heading for Mahebourg and the nearby nature reserve Blue Bay Marine Park. It would become, according to some scientists, the island’s worst ecological disaster.

“Environmentalists, fisherfolks, and others who make their living from the sea had called for help from the government, but they had only been met with silence,” says Yolande Hennequin, a local marine guide. So, leftist political party Resistanz ek Alternativ (ReA), which focuses on social and environmental justice, decided to take action.

“The administration showed its inability to act quickly, and it felt like criminal negligence toward our country and our ocean,” says Dany Marie, one of the founding members of ReA. Another member, David Sauvage, had researched low-cost, low-tech solutions and come up with the idea of the handmade oil booms. That first night in Mahebourg, the small group started gathering materials. Marie made a few calls to convince some hardware stores to open their doors, while Hennequin and others gathered straw from nearby sugarcane fields, learning as they went. “At first, the work was tentative,” says Hennequin. “We did not even bring a sheet to carry the cane straw back to the waterfront.” They persisted, and word spread, including via social media. In the early morning, fishermen joined in and taught them better sewing techniques. Within hours, the growing team had successfully made and tested an 80-foot boom.

As the sun rose, Hennequin left the scene to take a quick shower. When she returned, she found more than a hundred new faces had arrived to help. “I was so stunned, I had to sit down,” she says. Within the next few days, more locals came. They stuffed nylon netting with hair, cane trash, and other absorbent materials, as well as empty plastic bottles to keep the booms afloat. An assembly line took shape: one volunteer would sew the boom while another stuffed it, passing the completed piece to boat crews who deployed them around the lagoon and other threatened sites.

Other helpers distributed food and beverages to the boom-makers. As people rushed to donate their hair, barbers volunteered to snip and shave. Although the government had declared large swathes of the southeast as restricted areas, the movement continued to attract people from far beyond Mahebourg. Restaurants throughout the region distributed free food as the number of volunteers grew. The sugarcane and textile industries provided cane straw and began mass-producing stronger booms. Tourism app developer Discover Mauritius created maps to pinpoint sites where volunteers were needed. Even other countries joined: Australia collected more than 28 tons of hair for use in the booms. “It was all these actions that showed how resourceful and united Mauritians can be when it comes to protecting our homes and our natural heritage,” says Shaama Sandooyea, a marine biologist and environmental activist who was among the volunteers.

Within its first two weeks, the people’s factory zone evolved into a well-oiled machine, producing hundreds of feet of booms per hour, according to Marie, and eventually removing 75 percent of the oil from the coastline. Although male voices dominated media coverage as the disaster response unfolded, many of those who joined or led the effort were women. Virginie Orange, for example, captains a boat she also owns, while Parisot runs a small diner. The two women ran one of the food stations that kept volunteers fed over the long hours of labor. “I would start at 9:30 a.m., stay until 7:30 p.m., go back home and come back at 9 p.m. until around midnight,” says Parisot.

The volunteers sacrificed more than time. The long-term effects of the spill remain unknown, but many of those making or deploying booms reported a range of health problems. “During the cleanup some people wore their personal protective gear, but I, like many others who did not, started getting coughs, nausea, and headaches,” says Sandooyea. Orange adds that, for the first few weeks after the spill, “I suffered from nosebleeds and faintness. Now when I go into the lagoon, I still get skin eruptions all over my body.” The oil spill also laid bare the precarious economic position of those whose livelihoods depend on the sea.

Mauritius had already closed its borders due to COVID-19, and the aftermath of the spill has meant further restrictions on access to the lagoon. Boat captain Orange has seen a dip in her business, even as she incurred additional expenses associated with keeping her boat anchored for an extended period. Parisot, a single mother, had saved up for eight years to open a small diner, navigating loans and a difficult bureaucracy in the process. “I wanted to offer seafood so as to support local fisherfolks, and where I am currently located, I cater mostly to those who subsist on the sea and on tourism. But right now, the economy in Mahebourg is at a standstill,” she says. “How am I supposed to work?”

Parisot is among the many small business owners affected by what Marie calls the two-fold shipwreck: the virus outbreak and the Wakashio spill. Beyond the immediate health and economic fallout for Mauritians, the environmental impact is substantial. More than 50 melon-head whales (Peponocephala electra) alone turned up dead along the affected coastline. Entire ecosystems in wetlands, coastal mangrove forests, and the Blue Bay marine reserve have also suffered, though the full toll of the event is not yet clear.

The spill has been particularly hard for those Mauritians who call themselves dimunn lamer, “people of the sea,” whose families have been intimately connected to the ocean for generations. “When I first saw the Wakashio wrecked off the coast, I felt like I was losing my mother,” says Hennequin.

The people’s factory zone closed in mid-September, after the urgent need for the booms had passed. The waterfront spot where volunteers gathered remains a potent symbol of collective power, however. Says Marie: “Even though the government attempted to repress the movement by declaring Mahebourg a restricted area, it became a site of civil disobedience and resistance because of the people’s love for the ocean.”

More room to roam for the islands' unique fauna.
photography

Photographer Sarang Naik is reintroducing his hometown to its rich biodiversity, from glowing corals to dazzling sea slugs.
islands

An eccentric heiress, a daring mission, and the fight for North America’s most unusual pig.
Video